Content warning: This article discusses the Netflix series 13 Reasons Why, which features graphic depictions of sexual violence and suicide.

When the main premise of a story is a highly detailed suicide note, the myriad of themes open for exploration should come as no surprise. I could easily write about thirteen different themes in 13 Reasons Why, but instead I will focus on just one…one that I believe is the toxic cause of almost every major event in the story. 13 Reasons Why has a lot to say about male (sexual) entitlement.

Based off the 2007 young adult novel Thirteen Reasons Why, the 13-part Netflix series is about the events leading up to and immediately following the death of high school student Hannah Baker (Katherine Langford). Hannah dies by suicide, leaving behind a set of cassette tapes upon which she has recorded the 13 reasons for her suicide. These tapes are kept secret and passed only between 13 people, each of whom is discussed on the tapes as one of the reasons.  When the tapes are eventually passed to him, Hannah’s friend Clay Jensen (Dylan Minnette) must listen knowing that he is on one of the sides somewhere. The tapes reveal horrible secrets not just about Hannah but about every person that features, and Clay’s classmates will do anything to keep those secrets hidden. The series is unavoidably dark and upsetting, but the format of revealing something about each character episode by episode makes for a compelling story. Unfortunately many of Hannah’s secrets are about the unrelenting bullying and sexual violence she experienced from her classmates, and 13 Reasons Why quickly becomes a study in male sexual entitlement.

While I am discussing this theme in detail and therefore focusing on the behaviour of the perpetrators, let it be known that 13 Reasons Why does a remarkable job in keeping the Hannah the main focus and allowing her to tell the story. She is included heavily in flashbacks throughout the series and there is no doubt that her voice and her character is the strongest, most important one there. 13 Reasons Why is just as much about Hannah as it is about the reasons.

As Clay listens to the tapes, he learns horrifying truths about the other kids in his class: one boy spreads a sexual rumour about Hannah; another writes her name on a public list describing her as having the best ass; another takes her personal poem and publishes it in the school paper without her consent; another stalks her and shares a photograph of her kissing another girl; another sexually assaults her; and another boy rapes her. These events stack upon each other, with Hannah’s detailed audio suicide note becoming more and more shocking with every episode. These boys have no right to treat Hannah the way that they do, and yet they do.

This violent and criminal behaviour obviously impacts Hannah in the most significant and tragic way possible. But what 13 Reasons Why does well is show how this pervasive male entitlement is not isolated around the boys’ obsession or mistreatment of Hannah Baker. It permeates their entire high school culture.

Three of Hannah’s female classmates also feature on the tapes, but their reasons for being there are decidedly different, and two in particular are perfect examples of how this culture of male entitlement seeps into the patterns of behaviour beyond those in the most toxic male inner circle. One of Hannah’s friends Jess blames Hannah for her breakup with her boyfriend, when in reality Jess’s boyfriend was the one who spread messages about Hannah. Judging by the way that Jess completely bypasses her boyfriend and blames Hannah shows the dangerously deflective behaviour of male entitlement. Jess’s boyfriend not only spreads rumours and harasses Hannah, his actions go by blamelessly for the majority of the school and instead focus is called to Hannah’s status as a “slut”.

It’s obvious just how damaging these patterns are when they influence the behaviour of the female students too. Another female friend of Hannah’s also later throws Hannah under the bus in order to avoid getting rumours spread about herself. When the sexually violent behaviour become so suffocating that victimised students are taking on a dog-eat-dog mentality, it’s any wonder that the result is someone’s death. It’s a tragic story, but unfortunately there is a significant level of realism to it. These characters are very young, only sixteen or seventeen, and trauma is all the more difficult to deal with when it is inflicted on a young mind. Two of these young female characters are raped and neither has any idea how to handle the situation, and neither do any of their friends who find out about it. No parents are told, no police are called, and even when Hannah finally gets the courage to strongly imply to a male counselor that she has been raped, he downplays her testimony, fails to report it, and blames Hannah’s reluctance to reveal the criminal as the reason for not acting. It’s another shocking, backwards consequence of this culture of male entitlement. The suicidal survivor’s inability to reveal the perpetrator out of fear leads the male counselor to falsely believe there’s nothing he can do and leaves the rapist to walk free. The counselor even manages to find out from Hannah that her rapist is a senior, and attempts to console her with the reminder that “he’ll be out of this school in a few months”.

If that’s not a blatant perpetuation of rape and sexual entitlement culture, I don’t know what is.

It is also worth noting that while 13 Reasons Why has a notably diverse main cast by mainstream media standards, the cast is primarily male and literally half the main cast is still comprised of white teenage boys. The other half is Hannah (the only white teenage female character who is also dead in the present timeline), three female poc, and three male poc. In this instance I believe this casting is a deliberate choice as it makes a statement about who the driving force is behind the horrific culture of violence and male entitlement. While I don’t want to reveal any spoilers, 13 Reasons Why leaves plenty of room in its final episode for a second season and there’s no doubt that this theme of (white) male entitlement will continue. The Netflix release also includes a brief behind-the-scenes featurette in which the producers discuss the decisions behind depicting some of the violent and tragic scenes in such detail. The creators of 13 Reasons Why hope that the show’s refusal to hide the worst parts (specifically the scenes of rape and suicide) will remind audiences that these kinds of happenings are not just plot points in a story but real events that affect real human beings. The moral of 13 Reasons Why reminds us that you never know what’s going on inside the minds of even the closest people around you, and audiences are encouraged to keep lines open for discussion about suicide, mental health and trauma. This is absolutely an important message.

It is also important to recognise that much of the behaviour depicted in the series goes far beyond what can be defined as bullying. There is a reason that we have a word for rape, and that is that rape is rape. When our media includes violence and patterns of cultural toxicity in its storytelling, it is important to examine why that is included and in what ways, and what its inclusion says about that story.

13 Reasons Why may have it in mind to tell a story about mental health and being there for each other, but it does far more than that. It tells a story about how the smallest seed of sexual violence planted in the mind of a young person can become a dangerous many-headed monster. Where does that seed come from? While 13 Reasons Why does just enough to give us a background on all of these characters, it does not reveal a root of the evil. Perhaps because there isn’t one. The individual attackers can and should be held responsible, but Clay also learns while listening to the tapes that “We all killed Hannah Baker”. Of all the boys, he’s the only one without a direct action against Hannah; Clay’s reason, if any, for being on the tapes is about what he didn’t do. Clay is the bearer of change; his privilege can be used for good, if only he can figure out how.

If 13 Reasons Why gets a second season, I hope to see this theme of male entitlement addressed even further, particularly in the way of consequences. The set up is there, now it’s just up to the execution. How the show can continue without Hannah, however, I’m not sure. All that is important is that her voice is not silenced and stays significant and important, above the racket of entitled males. Your move, Netflix. 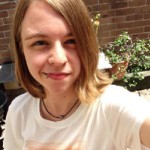 Erin Latimer is writer whose specialties include film analysis, television and gaming reviews, and re-examining movies from her childhood through a lens of feminist fan practices and queer theory.