Fandom sometimes breeds odd necessities, and engaging in “shipping culture” is one of them.

I didn’t used to ship, mostly because I didn’t understand what it was. From what I could tell, it was when people would prioritize the possibility of two characters entering into a romantic relationship over the rest of the narrative, and base their engagement with the franchise on the exploration of that dynamic. Which is fine, totally, just never anything that happened to me.

Until Korrasami that is. As I like to put it: it was the story that gave me representation I didn’t know I was lacking. And from mid-Season 3 to the end, it really was an aspect of the narrative that I found quite compelling. Thus, I became a “shipper.”

Since then I’ve reluctantly admitted to supporting only a few additional ships, all of which are canonical. I told myself it’s okay: it’s a thematic fit (Korrasami), or the ship teaches an important lesson (Bopal), or it’s out of respect for what both characters want (Daemianne), or if the ship breaks up then the most awesome character in the franchise will cease to exist (Garnet). I have damn good reasons for caring!

With the exception of Korrasami, which is just my OTP to end all OTPs and reason is thrown out the window, I only use the term “ships” to discuss the romances I’m compelled by because that’s how discussions within the fandoms are framed. Which is fine, though in some ways, always a bit confusing to me. And maybe that’s because while I know that both Daemon Sand and Arianne Martell want her to sit on his face quite badly, when push comes to shove my one true pairing for the Dornish Princess is in her relationship to her father. But if I were to start using “Dorianne,” I’m sure I’d get more than a view looks. Perhaps I’m just not particularly romantic, but I truly don’t prioritize that kind of relationship over anything else in a series.

Or so I thought. How foolish I was, to feel so above it all. I was a hipster shipper, man. The fandom forced me into using those joint relationship names. It was totally the thematic significance of the romances that I was drawn to. Mhm. I promise.

Enter Adventure Time. Apparently there are two things that are the flame to my moth: Rebecca Sugar’s music, and lesbian subtext. It took only a two-minute song for me to start “shipping” Princess Bubblegum and Marceline. I use scare quotes there because I had watched absolutely nothing of Adventure Time besides that clip of “I’m just your problem,” so I wasn’t even sure of what their dynamic was. Yet seeing that moment—the clear love and pain in Marceline’s performance—made me want to learn as much about them as possible. 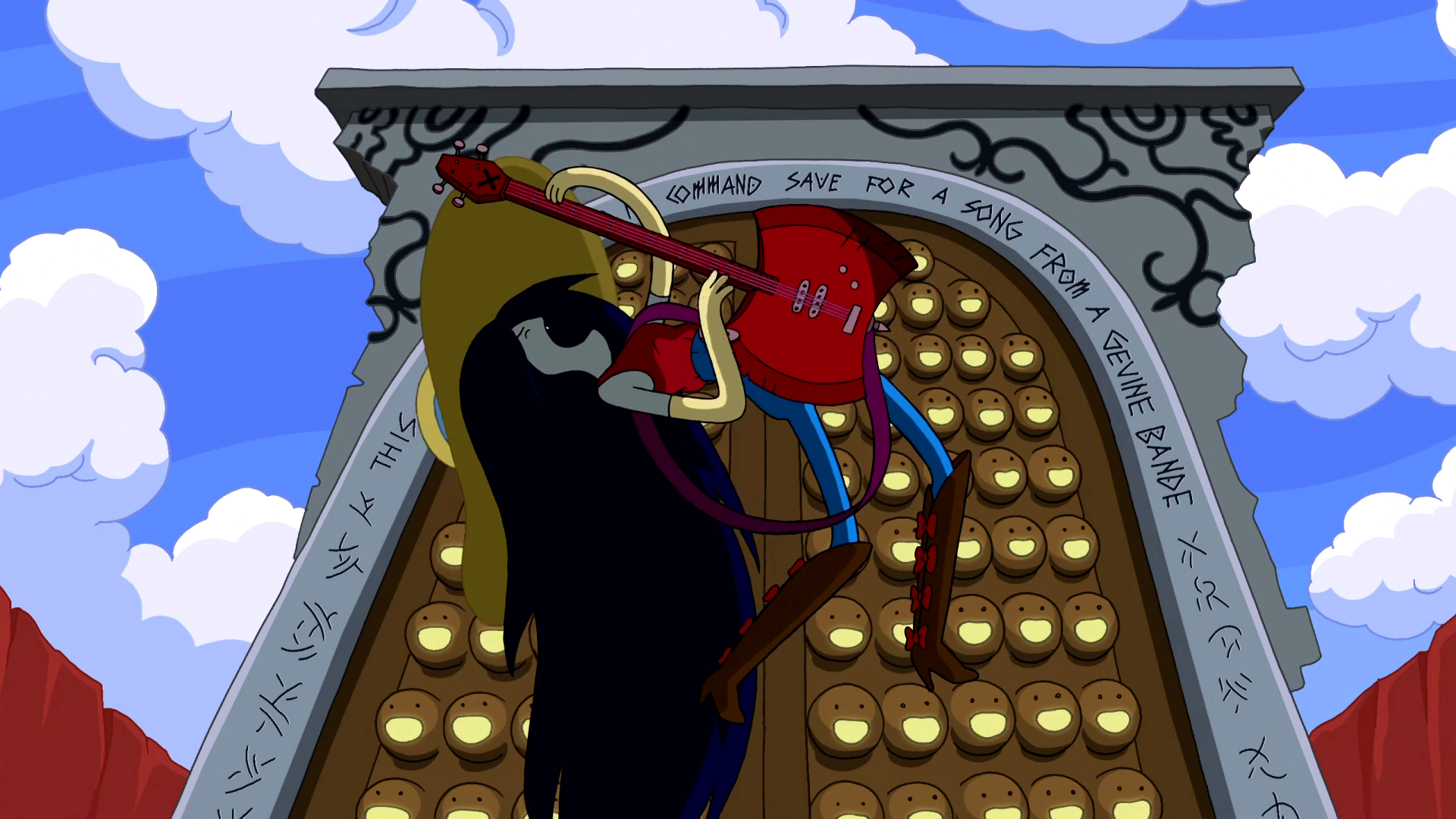 But again, I was fine. I also watched a clip of the song “Remember You” and wanted to learn about Marceline’s history with Simon. It was clearly just a case of intellectual interest. Totally not “shipping trash,” right?

Well…the show is in its 7th season. And even though Adventure Time only has 11-minute episodes, the idea of wading through 200 of them was just too much. So I cherry-picked (based on wiki research) episodes that seemed like they’d explore what I wanted, all while telling myself it was only because I found Marceline so gosh-darn compelling. “Sky Witch” was simply a fun episode, okay? I had very valid reasons for rewatching it 6 or 7 times in the span of 2 days.

Then “Varmints” aired. But no, I wasn’t shipping trash. I merely have an interest in the portrayal of censored, yet queer subtext in children’s media, clearly. So therefore, I had very valid reasons for rewatching it 6 or 7 times in the span of 2 hours.

Then the “Stakes” mini-series aired. Again, this was so completely academic! I had very valid reasons for watching the “batjacks” scene on loop. I was simply…AHHH FUCK IT I’M SHIPPING TRASH. 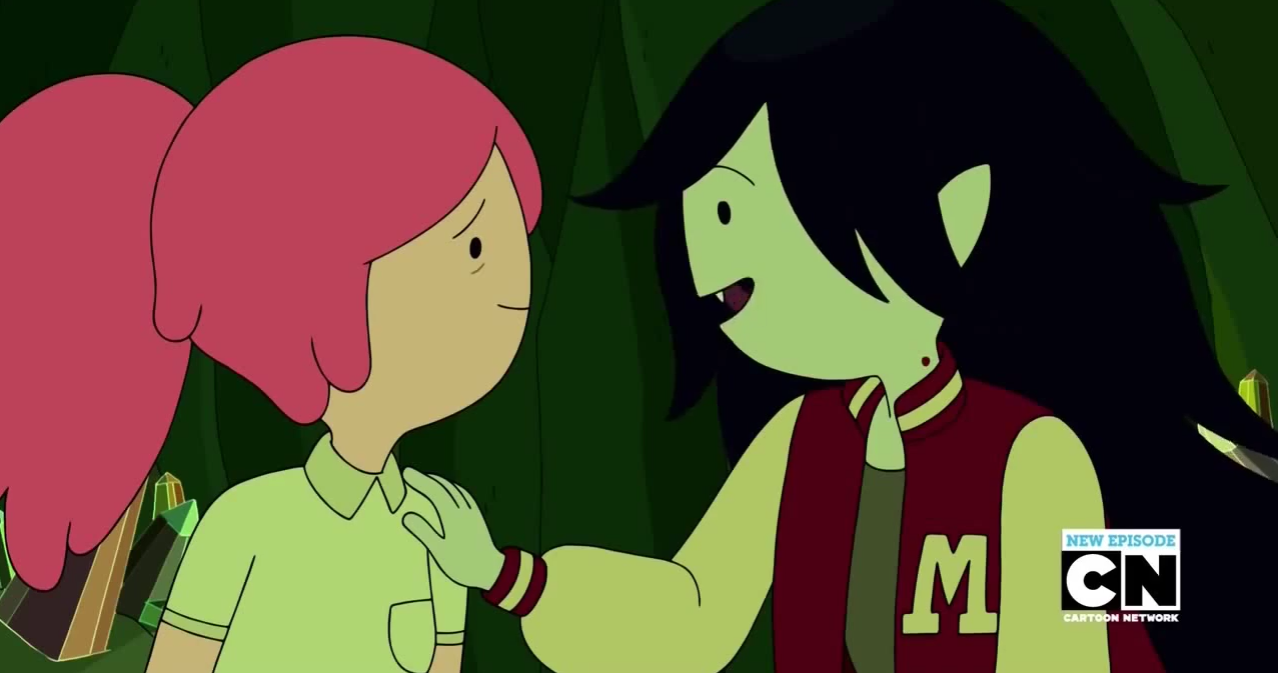 It’s bad, guys. “Bubbline” is essentially the only aspect of Adventure Time that I care about. Don’t get me wrong, I enjoy the offbeat humor (all hail the King of Ooo, because what an amazing character), I find Finn’s optimism refreshing, Bubblegum’s bizarre expressions (and random German phrases) hilarious, Marceline’s daddy-issues (twice over) gripping, and the overall plots of each episode engaging. It’s a good show.

But I’m here for one reason only, and it’s Bubbline. The first step is admitting it, right? I’ve seen maybe 30 episodes, and yet I’m somehow projecting an entire history onto them. And like…they just are together at this point, right? I know it’s kind of presented in such a way that Russian TV execs have plausible deniability, but let’s be real: that thin “gal pals” cover was basically blown up in “Stakes,” so if we could all stop pretending otherwise, that’d be nifty.

Believe you, me, I’m going to be back here writing about my headcanons for them, about the utter realism of this dynamic, about how it’s an amazing tale of two women who push each other in ways they both need, which at first meant pushing each other apart, but are now finally growing together once more. About how it took them hundreds of years to even have an emotionally honest conversation that addressed the mutual hurt. About how they are capable of understanding each other in a way no other character on that show could.

Like, I’m fully aware it’s a good ship that’s destroyed me. I choose well. And yet…I feel guilty that for the first time, I’m not just a shipper, but a Shipper™. Now I know why everyone calls themselves “trash.” I finally understand what all those songs have been about!

What is this then? Am I here to shame myself out of caring? Fuck no. I am no stranger to guilt, and there are only two things one can do with it: 1) give in to pressure and die a little inside (in this case, it’d be forcing myself to focus on other things), or 2) self-care. Admit that you like what you like, and you want what you want, and life is too damn short to pretend otherwise.

So please, come join me in the dumpster.