What am I meant to do? I just watched Saturday’s Adventure Time episode and…guys. My OTP simply is together. But then in another sense, they’re not. And my head is all confused.

For anyone who is unfamiliar with Adventure Time or my “princess and a guy like me” shipping aesthetic, there are these two characters on this cartoon who are awesome. One is Princess Bonnibel Bubblegum (“PB,” “Bonnie,” “Peebs,” and as of this episode, “Bon-Bon”), who is this massive science nerd that rules the Candy Kingdom, is a bit secretive, and buries herself in work, which comes in handy for creating emotional distance because feelings are hard. The other character is Marceline Abadeer (“Marcy”), a vampire bassist with daddy issues, who has difficulty taking things seriously due to the fact that being immortal kinda makes you see the futility in all of it. Though Peebs might also be immortal (she is literally made of gum), and her approach is more to fix everything with science because that’s what she perceives to be her duty. Just mark that down as reason #298 of how they complement each other.

The relationship between these two women seems fraught towards the beginning of the show, and we’re quickly clued into the idea that they used to be close, but had a falling out. Like friends do sometimes, right?

Except there’s also oodles and oodles of romantic subtext. Like seriously, I’ve only watched maybe 40 11-minute episodes out of 226 total, and perhaps just 15 of those actually colored Marcy and Peeb’s dynamic? Yet it is not only obvious that these two were former lovers, it is equally obvious that neither one is over the other. Marcy literally turns into a kawaii face when they’re in the same room. 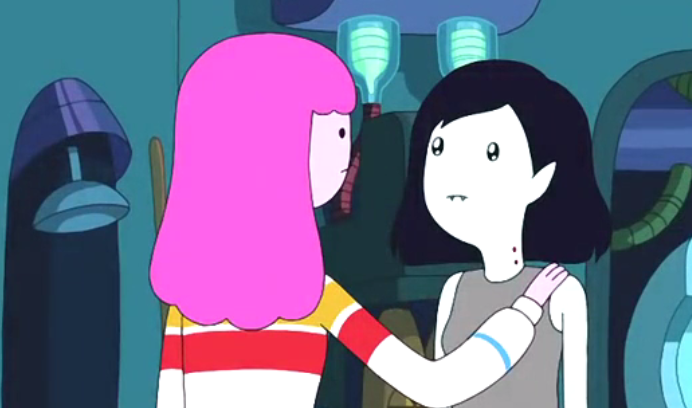 I suppose I could do a “subtext summation” post at some point, but here’s the bare, bare bones:

Maybe this sounds grasping, but it’s important to note that both “Varmints” and “Stakes” aired this year, notably after The Legend of Korra blazed the trail for same gender romances to be explicitly depicted on children’s television shows (only to be quickly followed in more detail by Steven Universe, which airs on the same network as Adventure Time). Additionally, neither Bubblegum nor Marceline is a “main character” of the show, and the number of episodes where they’re around each other is surprisingly limited. 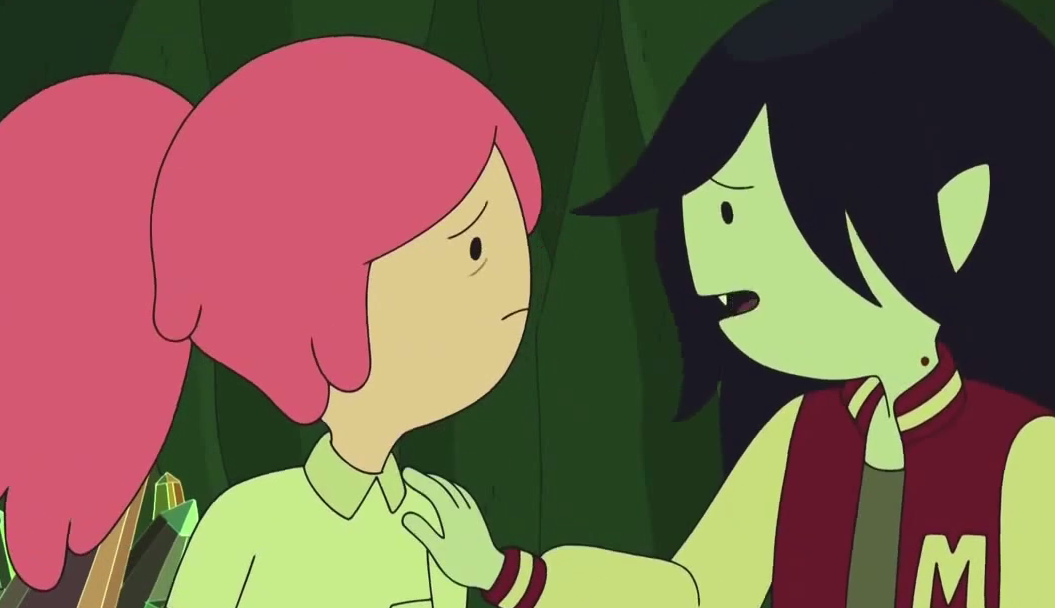 But even if there isn’t quantity, these two characters are so well-scripted and have so much inherent agency that when they do come together on-screen, it’s sort of impossible to not be won over by the possibility of a romantic dynamic, especially given the high emotional stakes (no pun intended) of the scenes we’ve gotten. There’s a reason that ever since Marcy sang that damn song over four years ago, there’s been rampant speculation about “Bubbline.” And in this era of increased representation, specifically in children’s cartoons, I’ve been of the opinion that their romance is headed in an explicit, incontrovertible, canon direction. Especially given that the end of “Stakes” reads as them getting back together.

Then “Broke His Crown” aired a couple of days ago, and I am truly at a loss. 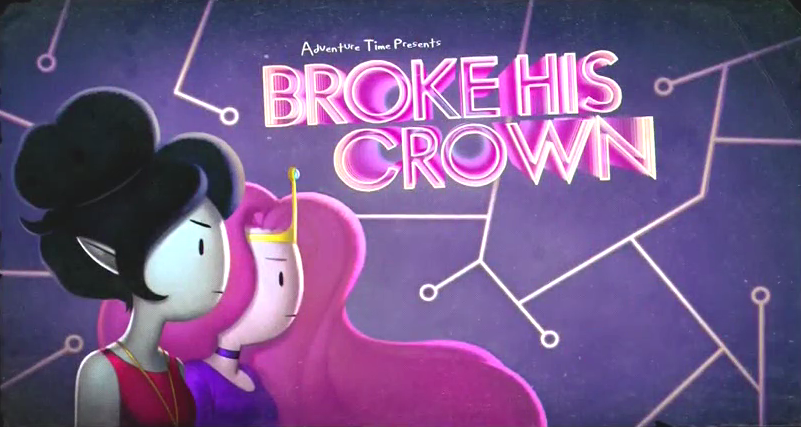 I mean…there is plausible deniability that Bubblegum and Marceline are now a couple in the same sense that if you stick a bucket on your head during a firework show, you can say the bangs you heard might have been from a bunch of cars backfiring.

I’m not even exaggerating. The entire episode’s premise was that Marcy wanted Peebs to go have dinner with her and the Ice King (one of her father figures), and that it “meant a lot to her” if they got along. Peebs grudgingly agreed (this dude’s like, kidnapped her before, plus she also doesn’t like relaxing; she likes science). The episode opens with them flying there together like this, despite the fact that Marcy can turn into a motherflippin’ bat and get her own butt there: 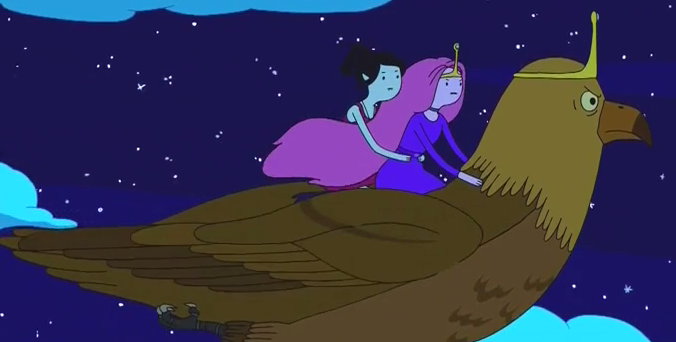 They then hold hands for a little while Marcy begs the gf to try and enjoy herself: 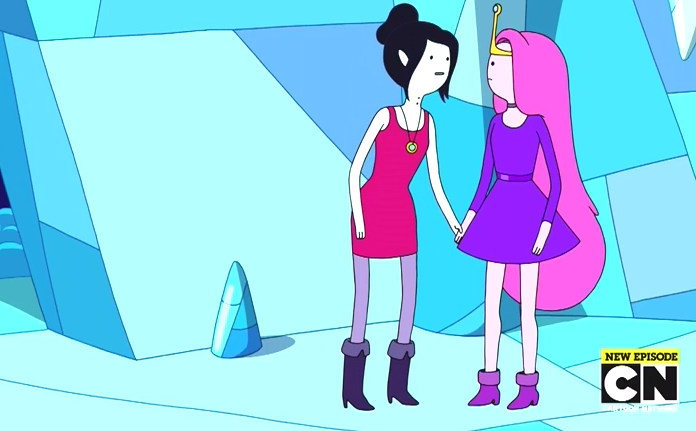 Peebs unceremoniously dumps juice onto her own face and Marcy cleans her up: 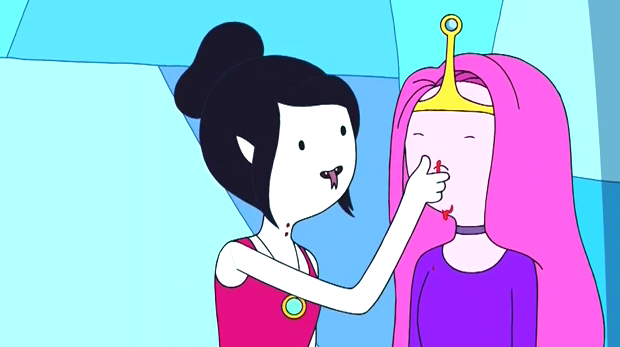 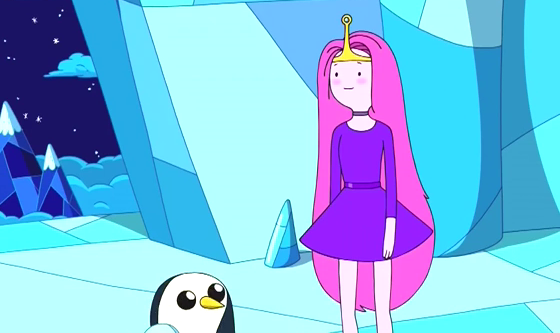 Marcy is visibly touched when Peebs calls the Ice King “Simon” (a first for her): 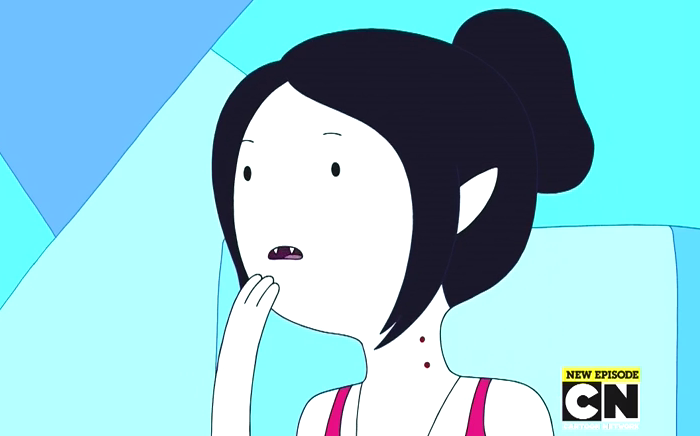 Marcy tells Peebs she always knows how to push her buttons…to “annoy” her. Okay.

When Peebs freaks out at the idea of being someone’s assistant, Marcy looks just amused by her gf’s antics, but calms her down:

Oh and the writers were just goddamn trolls and had younger!virtual reality Simon (don’t question it) ask Marcy if she “had a boyfriend.” Marcy awkwardly said “no” while Peebs smiled:

And then the episode ended on this: 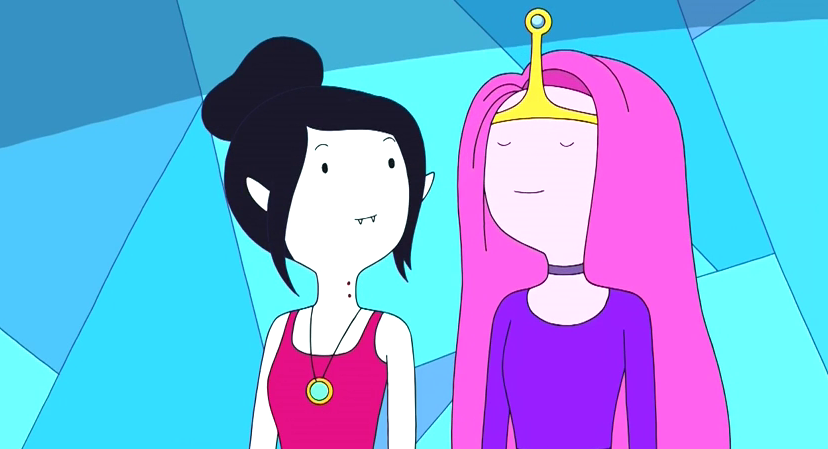 Here’s the thing. These are 11-minute episodes, so dialogue has to be deliberate. Animation has to be deliberate. If a character blushes, it is because it’s in the storyboard for them to blush, or it’s a creative choice by an animator that is then approved by the Powers That Be. If Bubblegum smiles in response to Marcy awkwarding around the boyfriend question, there’s a damn reason for that. They know what they’re doing.

More to the point, I get the feeling that the showrunners are actually doing all of this with good intentions. Even though “hide your lesbians” is a crappy trope and queerbaiting is a harmful tendency of media makers, Bubbline doesn’t seem exploitative in any way. I actually do feel represented here, and more to the point, their relationship isn’t made out to be a joke. Their dynamic is treated with a sincerity that many acclaimed “adult” shows with explicitly gay relationships can’t match. It’s just…good. And compelling. And causing me to question what the line is between subtext and explicit expression, because as far as I’m concerned, there is no ambiguity at this point.

But then there is. There has been no unequivocal depiction of a romantic relationship. No kiss, despite the fact that there have been plenty of kisses between characters of the opposite gender on this show. No verbal confirmation of “this is my girlfriend,” though we did get a reminder of the weenus named Ash that Marcy once dated, because I guess that’s not scarring for kids. It’s not like I want them to be running around with bi-pride flags, and frankly it’s even in keeping with their personalities to be a bit on the down-low with a relationship, but I think it’s fair to assume that if one of these characters was a man, we wouldn’t be waiting for confirmation at this point.

And as much as I am so perfectly content with how Marcy and Peeb’s relationship has been handled (they destroy me, so of course I am), it is difficult to not get just a little bit miffed at this fact, because I can’t for the life of me understand what’s keeping the brakes on here. Especially given the fact that “Korrasami” had such a positive response when this barrier was first broken; I think it would be naive to suggest that media creators of the same category would be unaware of the importance and validation of canonizing same-gender couples.

So really, what am I to do? What are we to do as consumers of this show? Should we let them slide because it’s “good enough”? Should we strap on tinfoil hats and theorize that Cartoon Network only wants one show “like that,” so Steven Universe gets the monopoly on LGBT representation? Should we even be pissed off? It’s not as though they randomly killed of Marcy and began pushing FinnxBubblegum (who would do that??).

Dudes, I have no idea. All I know is what I want to do: go rewatch this damn episode again.

All images courtesy of Cartoon Network