Remember how last week I was talking about how concerned I was that Jessica Jones’s new season won’t live up to the high standard of the first? And that this would break my heart?

Well, I don’t have to imagine what that’s like anymore, because I have the second season of Agent Carter.

The first season was hardly a masterpiece, or at least it was no Jessica Jones. But it was an enjoyable eight hours, with an good character arc for the protagonist, and a really good villain in Leviathan. However, I wasn’t twenty minutes into the premier of the second season before I knew that something was not right.

It’s a little hard to explain what it was in that first episode, but I think it was fundamentally a question of tone. The best microcosm may be Peggy’s interactions with Jarvis, Howard Stark’s butler.

In season 1, their relationship (and their witty Brit-on-Brit banter) was a highlight of every episode. But I think some one told the writers that they should continue this and then they just tried too hard, instead of letting it happen more organically as it had before. Now we have “designated comic relief time” complete with jaunty music, which, rather than anything actually funny, is about Jarvis acting like an idiot. Then there is Jarvis’s wife Ana. And her Hungarian(?) accent. Am I the only one who thought she worked better as a quite possibly imaginary George Glass type figure? And again, her fondness for public displays of affection only seems to exist so that we can laugh at Jarvis for being uncomfortable.

Aside from a rather half-hearted attempt to have her and Peggy bond in a kind of No-Homo! version of her relationship with Angie, I’m a bit at a loss to explain why this character had to exist at all. On-screen anyway.

Oh right, I remember; it’s so she can get shot in the stummy and her fecundity could get stuffed in the fridge for the benefit of Jarvis’s arc. Why this had to happen, I’m still not clear on. I appreciate that they tried to actually give Jarvis an arc, but in all honestly, I never got a sense from him in the first season that he wasn’t taking this saving the world stuff seriously, or thought it wouldn’t have consequences. And using his wife’s body to make this point is a little… like, they really couldn’t have come up with anything better?

And speaking of character arcs, you know who didn’t even fucking have one? Peggy Carter. Yes, the protagonist.

Because I can’t believe I have to say this but apparently I do: a love triangle is NOT a character arc.

It’s devastating that this is what this show is reduced to having this accomplished, independent female character literally pause the plot while she and Jarvis are driving to stop a crazy mad scientist from exploding an atomic bomb, so they can discuss this problem she’s having with her “suitors”. Like… what.

Okay… let’s talk about this love triangle. Starting with picking apart these two suitors of her.

First there’s Daniel Sousa, the one nice guy in the SSR from last season. I think he and Peggy had a thing and it didn’t work out? Or she rejected him. Is Peggy sexually active? Anyway, poor Sousa was so upset by whatever happened that she went all the way to California to get over it. There he meets Violet, played by the wonderful Sarah Bolger, who was entirely wasted in this role. They get engaged, much to Peggy’s… vague sorrow.

But, oh no… Peggy shows up in LA and poor Sousa is far too befuddled to deal.

Violet is totally a mensch about it, though. This show doesn’t have an “All Women are Catty” problem, at least.

And then he and Peggy spend the rest of the season being a little uncomfortable around each other. Sousa has a bit of White Knight syndrome, I guess, but nothing unreasonable. And Peggy is actually very supportive of him and his new relationship. It’s like they’re adults or something.

But apparently there is drama here, because she’s oh so torn when another man pops up in her life.

And I do mean “pops up.” Peggy breaks into a science-related building owned by the bad guys and he literally jumps out into a hallway and asks her to try his moonshine. Then they flirt shamelessly and this is enough to convince him to spill the beans on Isodine Energy and their dangerous Zero Matter. And then he turns into the Invisible Man.

And a little stupid… because Howard Stark can cure invisibility with a spray bottle.

I like Jason Wilkes. And I like his chemistry with Peggy. And I’m glad the MCU has finally decided to, like, acknowledge that race is sometimes a thing that exists. Sure, it’s a copout to do it in a historical setting where the narrative can feel all smug about being on the right side of history, but baby steps, I guess. It’s a little bit of whiplash after the Howling “let’s pretend the forces in WWII were integrated” Commandos being in the same universe. And sometimes the racism magically disappears within the show a la Games of Thrones’s patriarchy.

For example, I’m not sure about California, but we all know that there are many places in this time period where a black man coming up to a white woman in a hallway and flirting with her would not end in smiles and a derpy exchange of phone numbers.

But yes, it was tough to be a black scientist in 1947. And also a woman scientist. (No word from Marvel on whether being a black woman scientist compounded or cancelled out the bullshit that needed to be dealt with.)

Which segues very nicely into a discussion of my favourite MCU related topic: the antagonists. In one way this season was an improvement, and in another way it was a disappointing downgrade.

Let’s talk about the bad stuff first. Since I myself am such a negative person.

The Council of Nine is not Leviathan. Sure, maybe a bunch of rich old white dudes are a more realistic option for taking over the world than a group of little girl super soldiers, but they are not nearly as interesting. 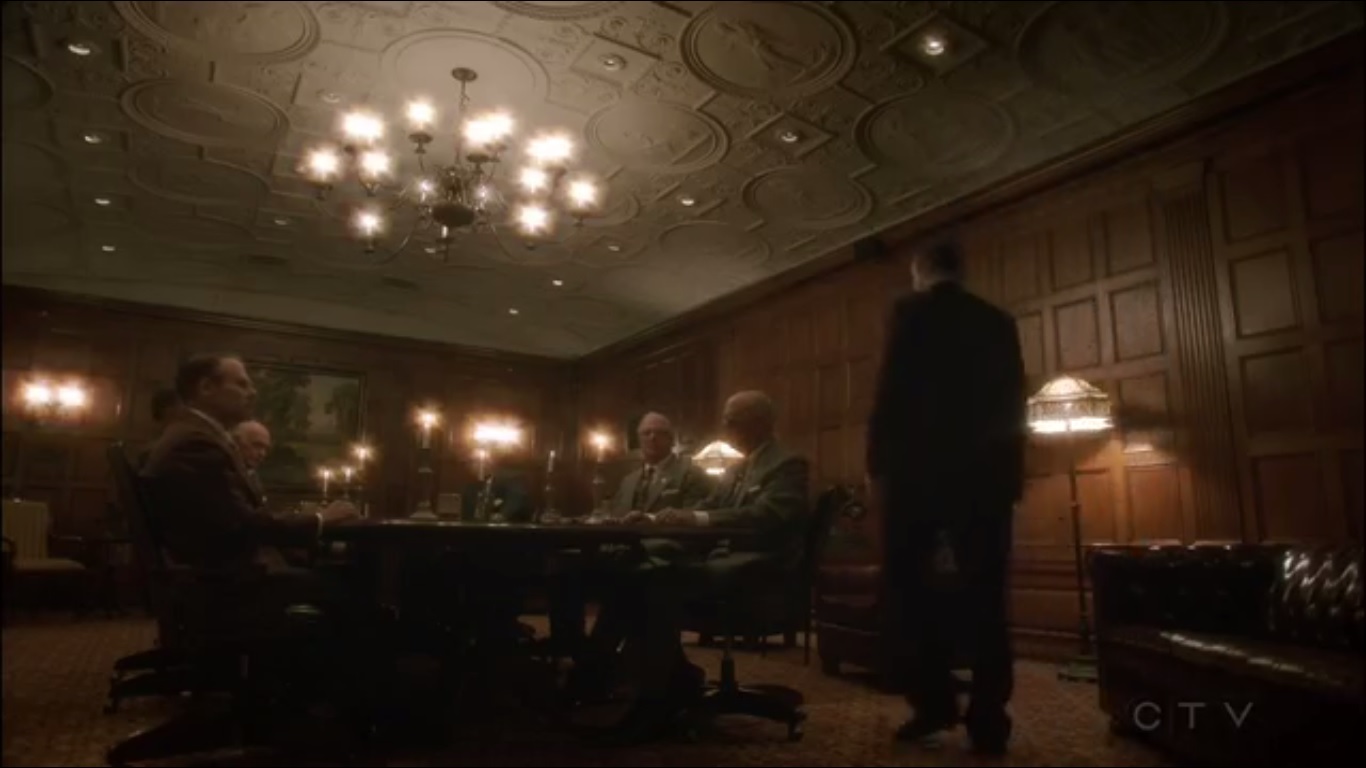 But maybe the writers knew that too, because the real antagonist was Whitney Frost, a science genius who is also a movie star. (Her science genius is a little improbable, to tell the truth. Like, she seems to have had zero formal training. But I don’t care, I love her anyway.)

With Frost, the season does manage to explore gender in a less superficial way than they do race. The way Whitney navigates the patriarchy is fascinating. Zero Matter represents that female power that men fear in a patriarchal paradigm. It swallows men whole. I don’t think it changed Frost so much as it brought out the worst aspects of her. It made her say, “I’m not going to play this game anymore. I don’t have to.”

The downside to this is: boy, do I wish this show were about her instead of the lady with the love triangle’s.

This feeling is nowhere more acute than in the fourth episode “Smoke and Mirrors”. While, in a series of flashbacks, Peggy was literally told she needed to stop being Not Like Other Girls, Whitney was watching her mother being ground down and internalizing the idea that a woman’s body is her only commodity.

I mean, there is really no contest about which character I would rather watch on my screen. Even notwithstanding the fact that one of those arcs is a freaking love triangle.

And can we talk about the “resolution” to this love triangle that swallows quality whole the way Zero Matter swallows men?

There wasn’t a resolution.

Sure, Peggy chose one of the two options in the end, but her choice was, well, not exactly arbitrary, but it was meaningless. You see, usually, when you have a dumbass love triangle, the protagonists choice between two romantic options is a mirror to whatever choice she has to make in her arc. But since Peggy had no arc it felt more like “oh, there are ten minutes left in the season! I guess I’ll go with bachelor number one!” 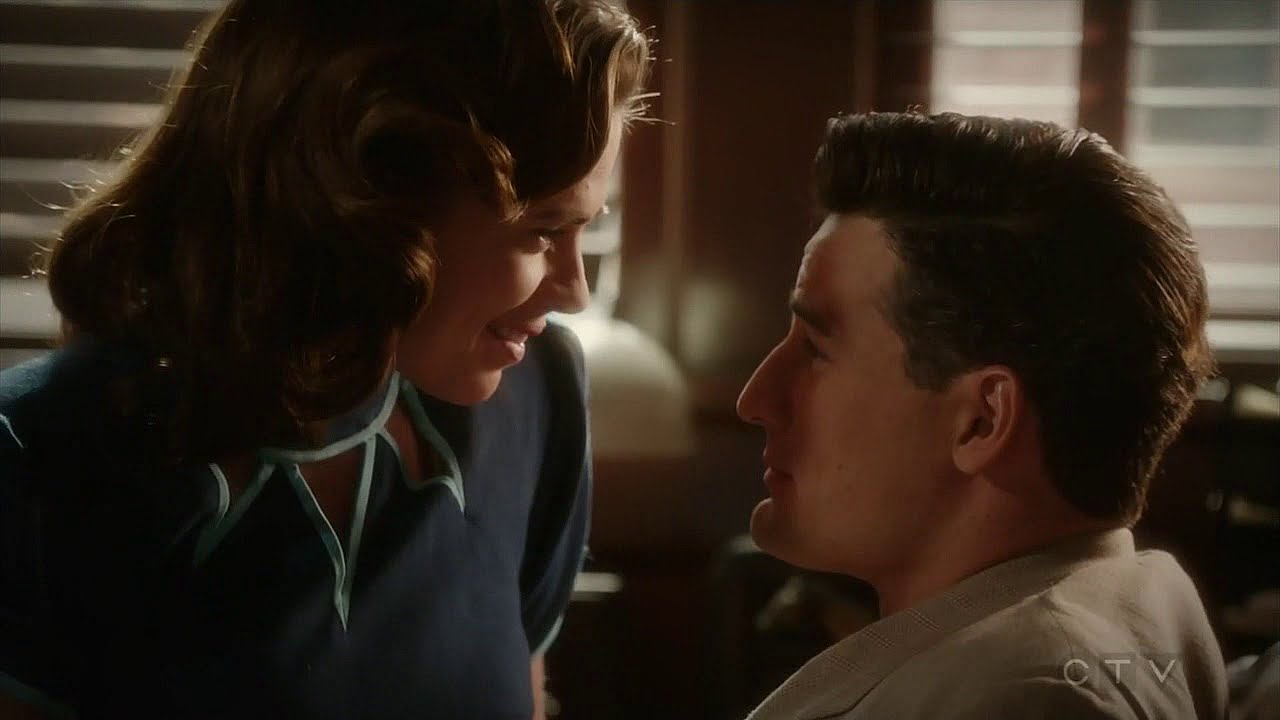 It was disappointing. The whole thing was disappointing. As much as I like Frost, she simply cannot make up for a lack of a proper character arc for the protagonist. As much as I liked Dottie’s return and the occasional flashes into what’s actually happening in her brain, it can’t make up for the bizarrely odd tone in Stark’s mansion. Where there are feral flamingos and terrifying koalas. How can someone write for a living and miss the fact that the protagonist needs to have a proper character arc?

I was apparently not the only one who felt this way. Because viewers dropped this show faster than it dropped Peggy and Angie’s relationship. And just last week, we found out that it will not be returning for a third season.

My feelings on this are mixed. On the one hand, I’m sad I won’t be able to follow Peggy anymore are she heads towards the foundation on SHIELD. I’m sad that I’ll never find out what Dottie will do next. But on the other hand, I would rather have one good season and one okay-if-odd season than a dozen bad ones.

I’ll miss Peggy. But at least this way I’ll get to imagine that she when back to New York and had a laugh with her “roommate” about that weird dream she had once…

Images courtesy of Marvel and NBC