When you set yourself the task of watching twenty-two episodes of network, episodic television in one week, you’re going to end up with a slight case of the bends. A lot happened in season 2; there were twists and there were turns.

I’m quite sure the theme was chaos, so I feel like it’s my duty to reflect that in this review.

One thing that I found very compelling was the rampant factionalism that affected the remnants of Shield after its downfall. The season was really structured around the efforts to coalesce the factions back together, or together for the first time.

The first part of the season was all about Hydra, as well as the struggle of Our Shield (as I will call it) to continue their mission with their laughably diminished resources. Hydra’s resources don’t seem to be laughably diminished, however. Where they get all their money is a very good question, but hey have a lot of it. Enough to start poaching Shield people like Simmons. (Don’t worry, she’s faking.) 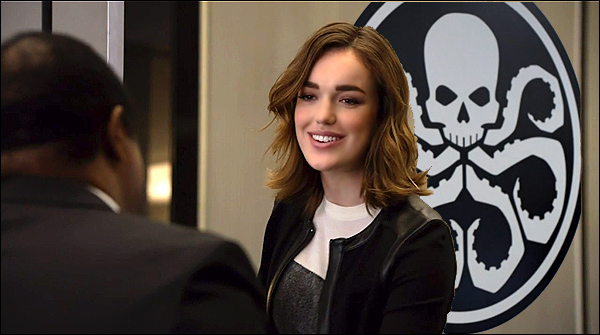 We get to see how Hydra is run, which I thought was a little exciting. But then again, I’m a total sucker for shadowy secret societies and old people having meetings about secretly running the world. It’s my kink. But it’s clear the Hydra’s foundation of fear and brainwashing don’t make for an especially strong secret society, and Our Shield is able to convince almost all the heads of Hydra to kill each other; it actually seems like they’re on the ropes.

The Hydra plot also starts to introduce the Inhumans. We’re introduced to this group of people with superpowers through the Hydra Head Werner Reinhardt/Daniel Whitehall. He was obsessed with this Kree artifacts called the Diviners. And these are somehow related to Skye’s father, Cal Johnson, and Raina, who we last saw working with Hydra on various kinds of human experimentation. There’s this entire thing about Coulson and him being injected with some Kree genetic memory and starting to obsessively draw a map that I still don’t entirely get, or think is particularly well done. (Why would this magic genetic memory cause all these people to start drawing a map to a particular place, rather than, like, start writing out the recipe for traditional Kree huevos rancheros or something?) But the important thing is Skye, all this hullabaloo leads her to use this Kree thing to “change”. She’s a superhero now. And she is not alone.

The introduction of the Inhumans was sort of a slow trickle. First we hear about what happened to the village that was trying to hide Skye, and the role her mother played in Doctor Whitehall’s ability to reverse his aging. But we don’t really get into it until Skye herself gets involved. Her new abilities, a control over vibrating things, or something, was too much for her and Our Shield to deal with, so off she goes to “The Afterlife” in maybe!China.

Meanwhile! There is also another faction of Shield, let’s all then Star Shield, because their logo is the Shield logo, but it has a star on it. (Brilliant!) These are a bunch of surviving Shield higher-ups who now believe that the organization’s fatal flaw was Nick Fury and his obsession with secrecy, and control. They want transparency, they vote on things.

I kind of like them. And not just because Edward James Olmos is involved.

Admiral Adama will fix everything!

They also object to Coulson and his weird alien obsessions and his secretly diverting massive amounts of money that was totally there at the beginning of the season and not awkwardly shoehorned in when the Marvel people were suddenly, like, “Quick! We need you to establish Age of Ultron for us!” So their solution is an involuntary merger.

As I said, I like these guys. I’m not sure where they got all their resources, but the whole shoestring spy thing when out the window in the mid-season hiatus, so whatever. And the merger sends the unified Shield up against the Inhumans. And somehow, Grant fucking Ward gets involved.

But before we discuss that, a little digression into other characters.

There are several new characters who play a major role this season. There’s Barbara “Bobbi” Morse, the new tank, and her ex-husband Lance Hunter, who’s some sort of mercenary type. And there’s Alphonso “Mack” Mackenzie who’s both a badass and a Royal Smart Person, so that’s nice.

They’re all fine. I don’t find any of them especially compelling, but they integrated very well into the rest of the team, and none of them is in any way offensive.

And I will say, I don’t know if Adrianne Palicki is a stunt-performer as well as an actor, but all the fight scenes she was in really raised the bar. Even if Morse’s abilities are a tad… improbable. (What even is gravity?)

On the bad guy side, Grant Ward gets over Skye (about time…) and hooks up with a new girl,  Kara Palamas, aka Agent 33. Together, they decide to actually freak me out a little by… having an actual relationship? Like, I think their actually into each other. It’s weird. Their whole thing is getting closure, which they do in a way that makes them clearly villains and not people the audience is supposed to have sympathy for. (*cough* I do not stand with Ward. *cough*) 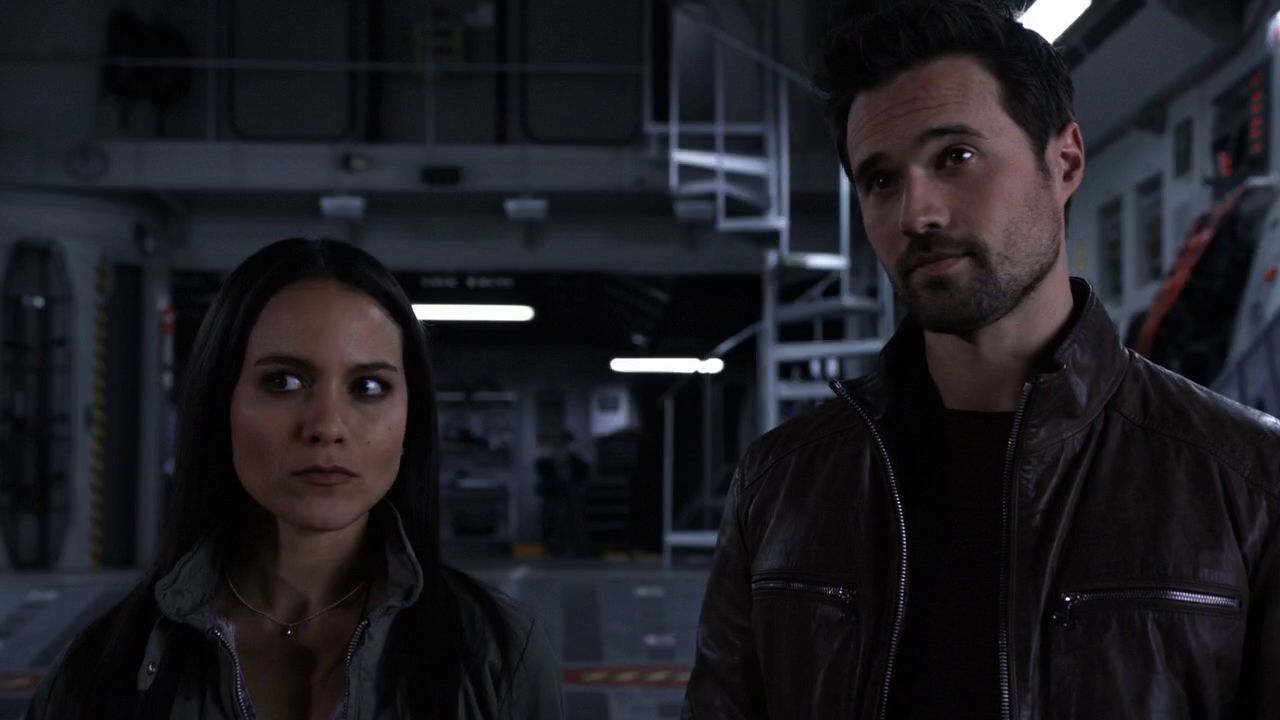 Then there are the Inhumans. As I already mentioned, we meet Skye’s parents. Cal Johnson is the man who Raina’s “really” working with. His motivation seems to always have been to “get his family back together.” Her mother, however…

Well, this is where I get a little bit uncomfortable.

Her mother is Jiaying, the leader of the Inhumans who never ages. We don’t know how old she is, but we do know that she can extend her life and heal herself by sucking the life essence out of people. 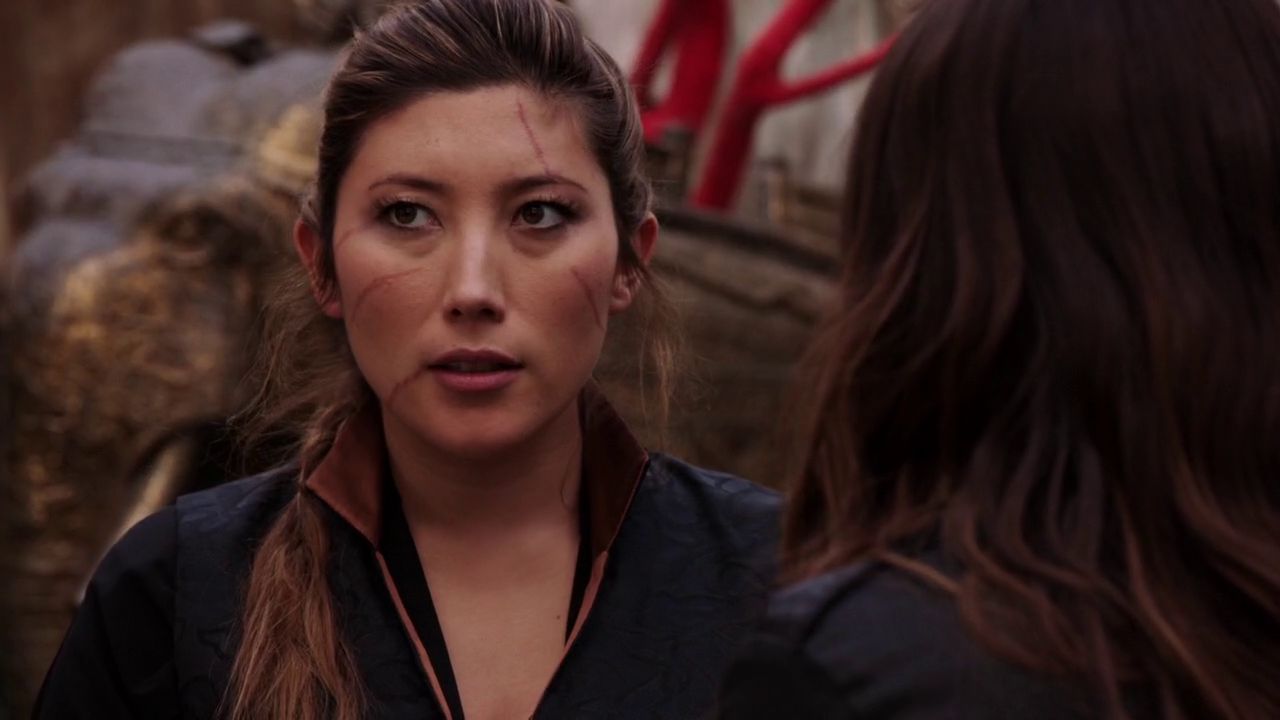 For several episodes, we hang out with her and he seems like a nice wise lady who’s trying to protect her people and all that. But then, and quite suddenly I must say… she turns into a psychopathic mustache twirling villain. She starts a war with Shield and she perfectly willing to kill her own daughter to see it through.

And then her husband kills her. After he had a heart-to-heart with Coulson about how she was the evil one all along. 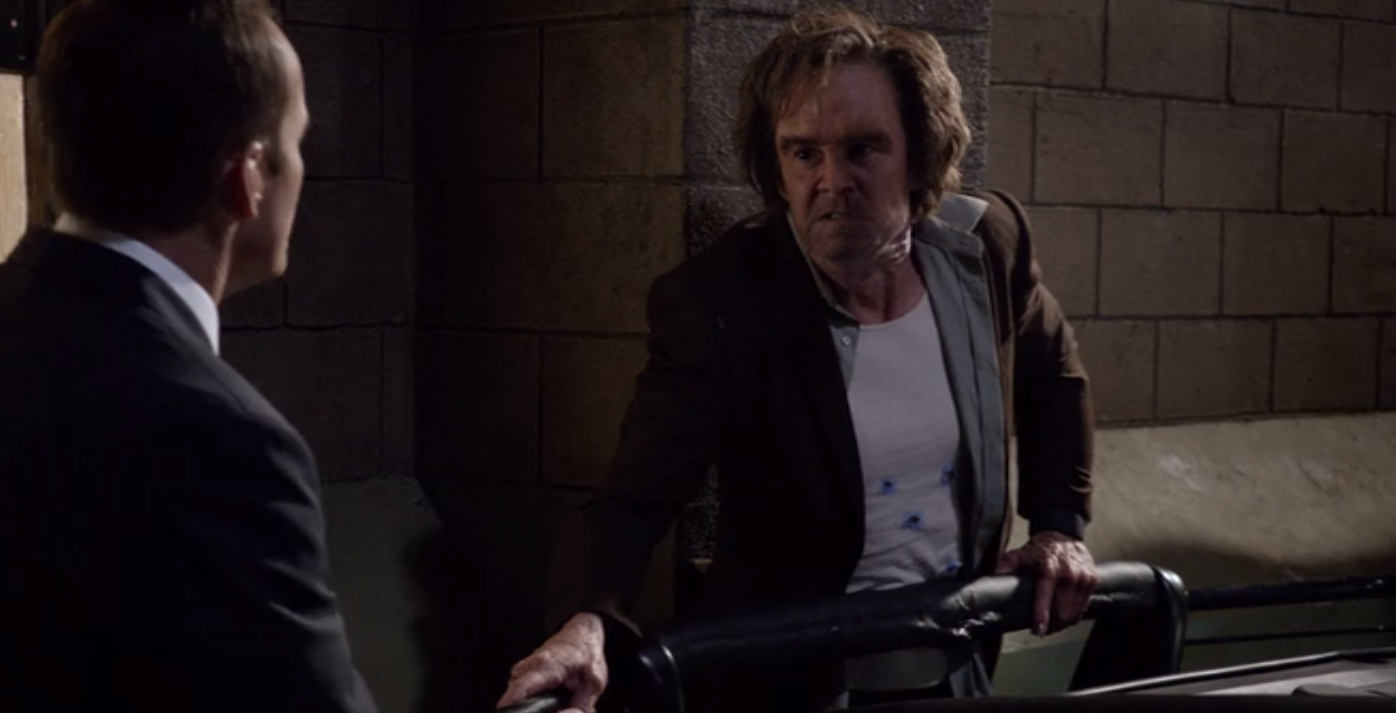 That made me moderately uncomfortable, but it was the fact that this was part of a pattern in the climax of the season, and that was where I really had the problem. Because there seems to be a lot of dead and almost dead women in that last episode.

In addition to Jaiying and Cal, we also see Ward accidentally shooting and killing Kara, and Morse taking a bullet for Hunter, an injury that was not fatal, but hey, she has principal cast plot-armour.

Three women in that position in one episode is not flattering, but it’s not more than eyebrow raising, until you take into account the fact all three incidents are framed around their relationship with men, and largely focusing on the effect the event has on these men. Yup, manpain, three different instances of manpain. This is what we like to call: a pattern.

I’m not ready to say that this show has a gender problem quite yet, even if the last episode makes me apprehensive. Though Kylie tells me this was the basis of her “My Fave is Problematic” piece on this show.

And then there’s the fact that the narrative wants me to be on the side of Coulson and Our Shield when they stand up to Star Shield. Despite the fact that, like, I think Star Shield might be in the right in this? Coulson went to Ward for help against these people, who clearly had good intentions. Because it meant that he wouldn’t be in charge anymore. Are we supposed to be okay with that?

But the show still suffers from the general inconsistency that was a problem in the first season. Plot lines are oddly dropped. There are some things that are clearly thought out and planned in advance, and others that are thrown together without seeding at the last minute.

Images courtesy of ABC and Marvel There was only one question left going into his final episode of what has been a remarkable first season for Loki. It has been...