Two weeks after the audience finally found out Arrow’s big bad’s identity, it is up to our on-screen heroes to get their chance. Thus, Prometheus can finally go head-to-head against the Green Arrow and drag his public image through the mud even further.

Oliver is climbing up a snowy mountain somewhere only he knows. He finds a sort of temple that is very reminiscent of Nanda Parbat. Inside, there’s some ninjas from the League of Assassins and finally she appears: Talia Al Ghul. Oliver confronts her about being Prometheus’s trainer and she admits that she is Ra’s Al Ghul’s daughter after deliberately hiding her last name from him.

Talia says that even though she had a fraught relationship with her dad (Ra’s has two daughters who dislike/hate him, how about that?), she was unpleased to see Oliver killing him. So, she trained a man who would make Oliver suffer. She bluntly tells him who Prometheus is: Adrian Chase.

So, Oliver goes back to Star City to confront Adrian who immediately realizes Oliver knows about him, but he doesn’t let that get to him. Instead, he ups the game by telling Oliver that he is holding Susan Williams captive — after last episode’s end tag when he met up with her threateningly — and if Oliver captures or kills him, she also dies of thirst and starvation. Adrian solidifies his positions as “being ten steps ahead of Oliver when he doesn’t even know what game they’re playing”.

Oliver and Diggle make a move on Adrian’s house to get some information or whatever and find his wife there just standing in the middle of the house. Ollie tries to tell her that Adrian is Prometheus, but she doesn’t believe him. The ACU arrives at the house after a call (from Mr. 10 Steps Ahead) so they could get Star City’s Public Enemy #1: The Green Arrow. Quite obviously, the ACU doesn’t succeed as Olliver pulls in a Smoke Arrow.

Meanwhile, Felicity is doing her thing at Helix, being amazed and confused by how illegal their operations are, including a live feed to every camera on the planet. Oliver does know that she is up to something, but she prefers to keep it to herself. Nonetheless, Felicity finds out that Adrian Chase is an alias and this would be ground for his arrest.

Oliver is made to host a press conference condemning the Green Arrow even further for invading Chase’s house. He demands the GA to turn himself in the next 24 hours or he will order the ACU to shoot on sight. From there, he goes straight ahead to Captain Pike to give him the flash drive that would condemn Adrian for not only using an alias, but also for being the Throwing Star Killer. Sadly, Captain Pike is attacked by a hooded figure soon after and ends up comatose. 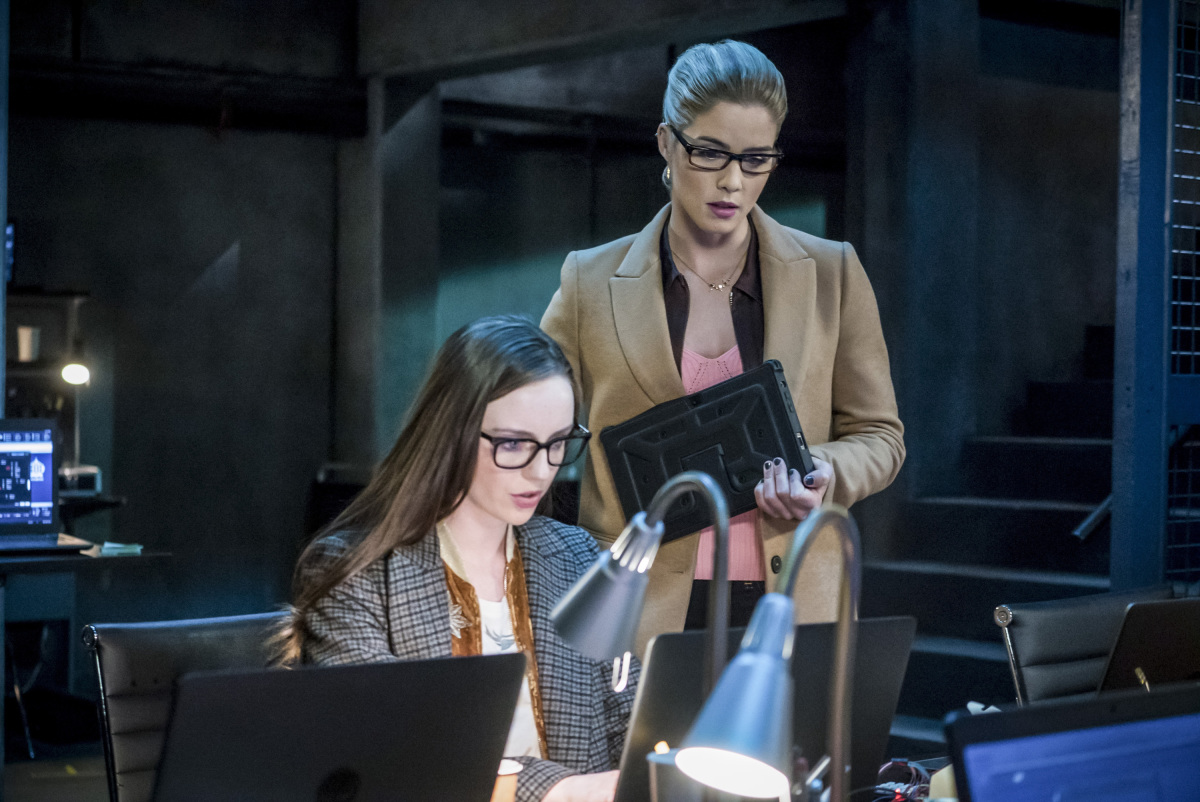 So good to see Kacey Rohl on my screen again.

Felicity asks for Helix’s help in finding Susan’s location with their live feed, but she needs to do some illegal activity (something with border drones) for them first. She enlists Curtis’s help and tells him about the whole situation. Thus, she ends up getting Susan’s holding place and tells Oliver who, before suiting up, delegates a secret task to Diggle.

Team Arrow sans Diggle go to the abandoned building. Mr. Terrific whip out his Mr. Terrific Balls™ to help with the search — kind of like those balls that mapped the cave in Ridley Scott’s Prometheus (HA, this is borderline meta). Rene and Dinah are trapped by some bombs that have been planted and that will take out the entire building. Oliver finds Susan and sets her free, looking further for Prometheus.

As the two meet and one starts realizing how similar their uniforms are, the Green Arrow reveals his A Game: Diggle had absconded with Adrian’s wife, taking him to the location so she could see for herself. As much as Mr. and Mrs. Chase seem to have a genuine moment of connection and sadness, Adrian ends up stabbing his wife. Diggle leaves with Mrs. Chase while Oliver and Prometheus fight.

Adrian is adamant on his will to not kill Oliver — somewhat alike the Joker’s cringeworthy line on Suicide Squad “Oh, I’m not gonna kill ya. I’m just gonna hurt ya really really bad”, but this time applied more to an emotional level. Oliver takes the upper hand for a moment and as he is prepping himself to kill Adrian, he is arrow-ed in the thigh by Archer In a Dark Green Uniform #3, I mean, Talia Al Ghul, who was in cahoots with Adrian. Gasp, everyone.

Next we see of Oliver, he is chained up in a room being taunted by Adrian and Talia as the duo promise to make him suffer. Felicity decides to go to Helix again to track Oliver down. Quentin and Susan make their way to the station to tell on Adrian being Prometheus, but are met with him calling all the shots, telling everyone the Green Arrow murdered his wife (who had passed away en route to the hospital).

Ok, now that the relatively good parts of the episode are over, time for the usual paragraph on Arrow’s very own take on “Boring Conversation Anyway”: the Russian Flashbacks that rarely amount to anything. Way too long story short, Oliver suited up as the Hood, killed some people including Gregor potentially — it wasn’t that clear, but I’m 80% positive he did.

Throughout Arrow’s actually impressive number of episodes (over 100), there have certainly been a high amount of season long villains that worked. It is just accepted between fans of the show that Slade Wilson/Deathstroke is the best. I particularly remember being SO INTO Arrow during that season because every episode packed such an enormous punch and it wasn’t always about body count.

After season 2 ended, came the so-so season 3 with Ra’s As Ghul and the usually hated/disliked Season 4 with Damian Darhk (who is actually very well used down on Legends of Tomorrow). With season 5, we had Tobias Church for a little while who I always thought was just a big bully, the Vigilante pops here and there every once in a while, and finally Prometheus. 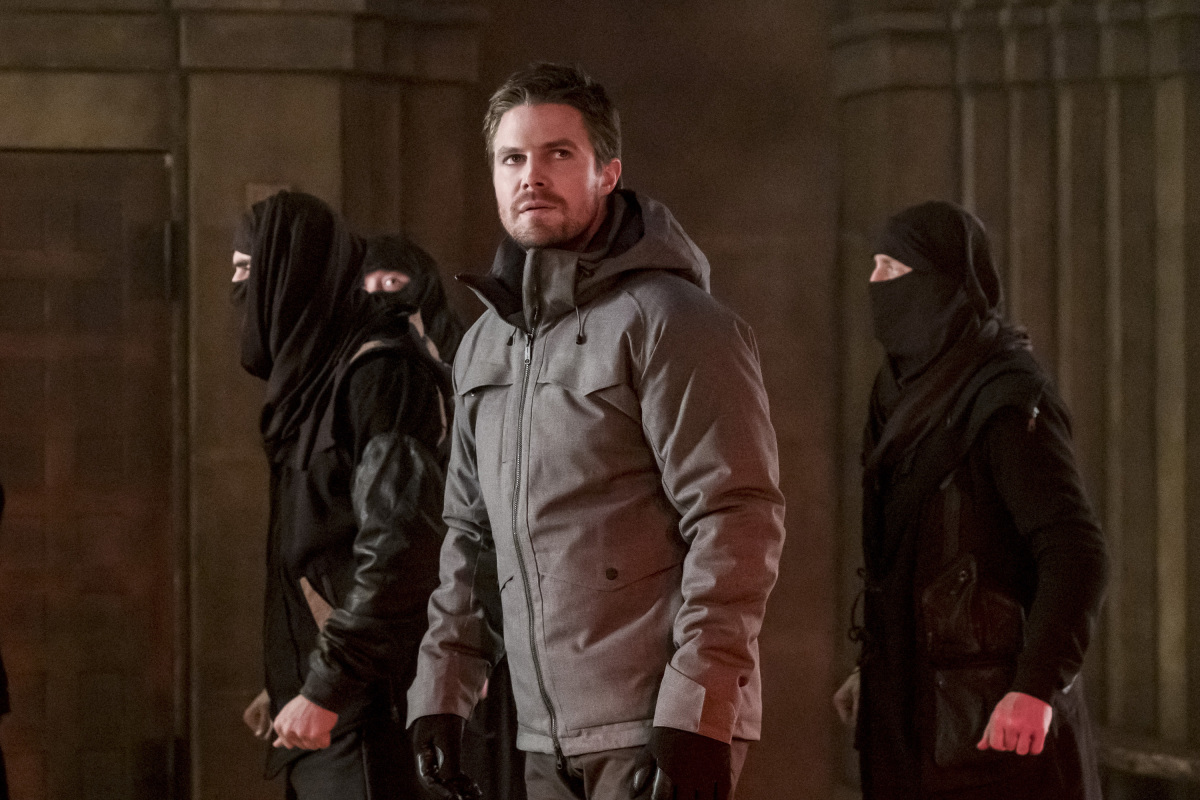 As his identity has finally been revealed, I think it’s nice to look down the road. Oliver feels betrayed and his endless pool of guilt manages to get even deeper — actually, it’s only the beginning because I can only presume the death of Mrs. Chase will fall heavily on his shoulders as well.

This is, as Prometheus likes to point out every chance he gets, the point of it all: Adrian (kay, I know his real name is Simon, but let’s keep it as Adrian for the time being) felt hurt after Oliver killed his father back in Season One. He took a sabbatical with Talia some time after Season 3 — I’m expecting useful flashbacks for once — and decided to rain upon Oliver, crushing his spirit first and foremost.

Does this feel as a sort of retelling of season 2? YES! If you think about it, Prometheus’s and Slade’s motivations are not so far off: that good old Revenge Plot after someone they cared for were killed directly or indirectly by Oliver and they plan on doing this by coming for Oliver’s “loved” ones. Slade killed Ollie’s mother and I can only guess if/when/who someone else will end up dead. It is also like Chase told Oliver:

So go ahead. Kill me. Let’s find out how much more loss you can take. Because I don’t think it’s much. I think that you’re one loss away from being destroyed.

Glossing over Josh Segarra’s incredible delivery of this line, Adrian has a huge point and he made sure to also point out: Oliver has lost so many people in this five year period: his dad, his mom, Tommy, Shado, and Laurel — plus Sara and Thea for a while there.

Prometheus is really going for emotional torture instead of physical. This comes about eight episodes since Arrow has its part of the Invasion crossover be an alternate timeline where Oliver got to see his parents and Laurel again which was really goddamn emotional in all sorts of categories, making it even more bittersweet.

The plot is compelling, yes, and at the very least it is somewhat entertaining. Now, the Russian flashbacks have been dread after dread — the only useful ones were about introducing Talia, who has been a very welcome addition to the show, especially now that she has acknowledged her heritage. However, one does have to wonder if her introduction was even necessary at all: Oliver already had plenty of training from the Island so the need to bring in a new instructor feels kind of flat. I do have to say that my complaint her is not quite about Talia, but about Russia.

Taking out the political state of the country and the world at the moment, the Russian flashbacks don’t really add up to much, you don’t really care about them, the characters are pretty much interchangeable (Bratva Captain #1, Bratva Captain #2, Bratva Captain #3, and so on). I don’t really want to assign blame to the writing team, because storytelling and being creative, but these flashbacks have been remarkably uninteresting in SO many levels since last season — I usually forgive Season 3 because of Tatsu Yamashiro. To be fair, I just had to make a real effort to remember what even were the flashbacks from last season without Googling.

What I’m saying is: Arrow has been crafting a really nice comeback after last season’s general snafu, managing to entertain and bring back old fans (some even say that Arrow got better than The Flash, which would be a heresy to say two years ago), but they do need to end these flashbacks soon — well, sooner, because I know that they will be done with by the end of the season as Ollie goes back to the Island, but like, wrap it up, guys!