As the final member on this week’s DCTV mid-season premiere lineup, Arrow delivers another good, yet inconsistent, episode. It tries to explain deceased Laurel Lance’s sudden reappearance, and deal with the fact that Oliver killed Felicity’s boyfriend by accident.

Picking up right were things left off at the mid-season hiatus, Oliver is dumbfounded to see Laurel again. I’d like to take a moment to remind everyone that character actress Katie Cassidy (*literally* too good for this) has a contract with the CW that says she is a regular over all DCTV shows (John Barrowman and Wentworth Miller have similar contracts). This means that the CW is putting its money where its network mouth is and, for the third time this season alone, brings back a dead character and that’s fine. I’m a Dinah Laurel Lance apologist and supporter, so I enjoy these opportunities, but I feel like they are gonna run out of juice eventually.

Nevertheless, Oliver asks how this is even possible and Laurel spouts some shit about Sara Lance using her legendary time travel skills to save her. It’s clear bullshit. Oliver must not be caught up with Legends of Tomorrow or he would know hthat Sara has given up on this mission, because she knows her mission as a Legend and bringing back her sister are incompatible. So, naturally, Oliver believes Laurel without question, proclaiming “it’s a miracle!”

Felicity arrives at the duo’s gathering (because she needed to tell Oliver that John Diggle had been arrested again, eye roll) and as happy as she is to see Laurel again, supposedly, she is also skeptic and that’s good. She hosts a “Welcome Back From The Dead, Laurel” party and everyone is cool with it.

The mood at the party is very grim however, given that Oliver literally just killed a guy by accident, Felicity is grieving, and John is in jail. Despite this, Oli’s newfound optimism inspires him to give a speech to welcome back Laurel to the world of the living.

Turns out, ha ha, that Felicity only came up with the excuse to have a party so she could get her hands on some Laurel DNA because, thankfully, at least one character is suspicious. However, the DNA between new and old Laurels match which has Felicity come up with the “evil twin” theory (well, Earth-2 Theory) just as Laurel sneaks in on her and reveals herself to be the Laurel from Earth-2, Black Siren, who came up to Earth-1 last year on a mission for Zoom back at The Flash. She wreaks a bit of havoc at the secret cave, but Oliver arrives and she escapes.

This scene starts a trend: cartoonish villain!Black Siren. The writing team had arguably the most talented actor from the cast spew some of the terrible villain lines with that terrible tone that screams “yoo, I’m so edgy and I love Hot Topic” and it’s all pretty bad.

It’s now time for an Exposition Dump and it doesn’t quite work. Apparently, Prometheus took the train to Central City and released Black Siren from Star Labs’s prison, and no one from Team Flash noticed it or tried to tell Team Arrow. Equally contrived is the fact that no one tried to contact Sara to see if she really Did That ™. We know from the crossover episode that Felicity knows how to contact the other teams, but dramatic tension takes priority to logic here.

That brings us up to Black Siren and Prometheus meeting, which boils down to him being a bully to Laurel and telling her she is only free because of him and that he can/will kill her if she doesn’t obey him.

A brief scene with Oliver and the District Attorney happens. The only important detail you need to know is that they will cover up Detective Malone’s death to avoid mayhem, given how the Arrow was tricked into killing a man of the law.

Laurel calls Oliver and manipulates him into a meet up because she is afraid of Prometheus. It’s not THAT clear (even by the end of the episode) if that was sincere or not , but I don’t think so. They set up the meeting by the Black Canary statue. There, Oliver tells his recruits to stand down, but Felicity tells them to attack Black Siren, which lead to her being captured by the Green Arrow. 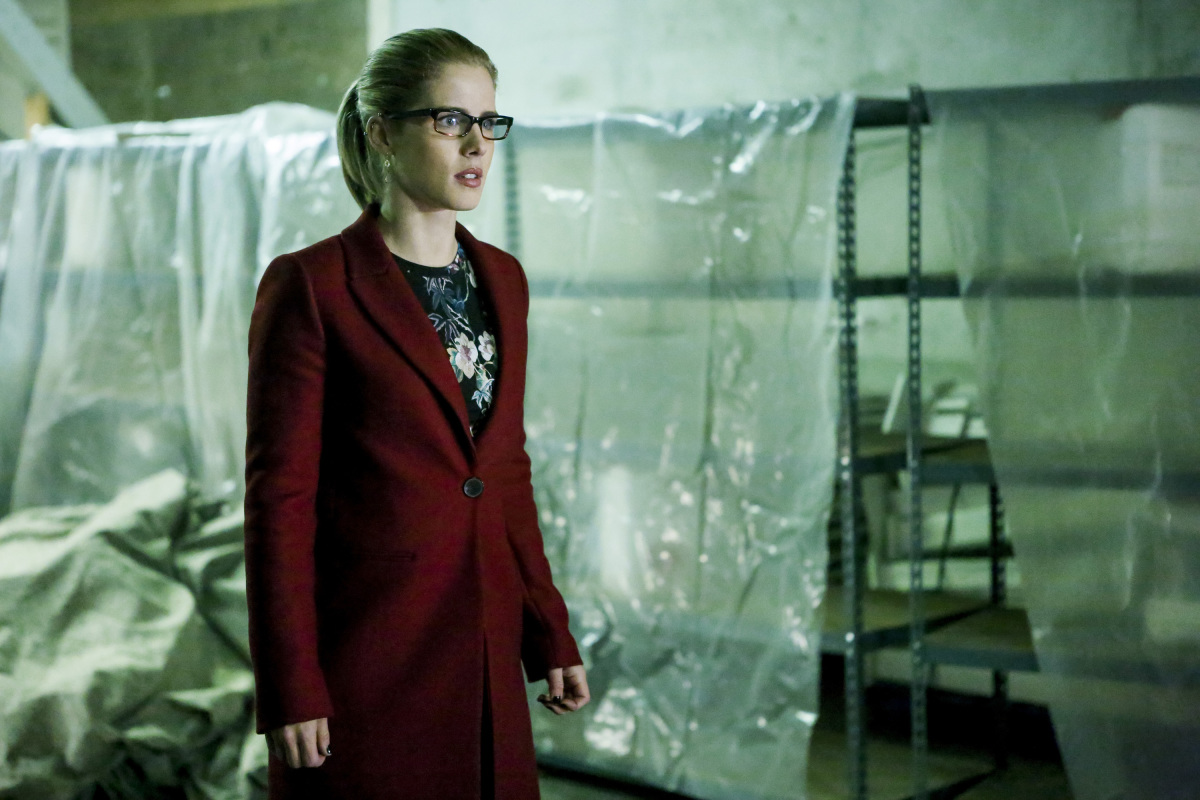 The episode takes a breather as Oliver and Felicity argue a bit about how she gave a contradictory order to the team, and it doesn’t really accomplish anything. Oliver then goes to talk to an imprisoned Laurel and they have a semi heart-to-heart about how Laurel sort of went evil after Earth-2 Oliver Queen died ten years previously. He thinks he can reach the good in her, but Felicity thinks otherwise.

Felicity then goes over to Laurel with a glass of water and Laurel returns the favor by spouting off poorly written lines of catty dialogue. This is so not what I wanna see. Felicity gives the old “Oliver is a good person, he internalizes guilt, and sees a chance at redemption not only for Laurel, but for himself” speech, which is touching. Laurel sips on the water, then the power goes down, giving Black Siren chance to escape – her cell needed power to dampen her screaming. Thankfully, it was all a ruse, because Felicity had put some tracking nanites into the water and allowed Laurel to escape so she could lead the team to Prometheus.

As soon as the nanites metabolize, they go over to some warehouse where Black Siren is waiting for Prometheus. There’s some fighting – our greenish villain keeps overpowering our green hero – a bit of cattiness, and another one of Oliver’s attempts to reach the Good Laurel. This predictably fails miserably and she decides to kill Felicity. Fortunately, Curtis had come up with a portable sound dampener, so Black Sirens murderous plans are foiled. Felicity takes the opportunity to punch Black Siren in the face #EMPOWERED. 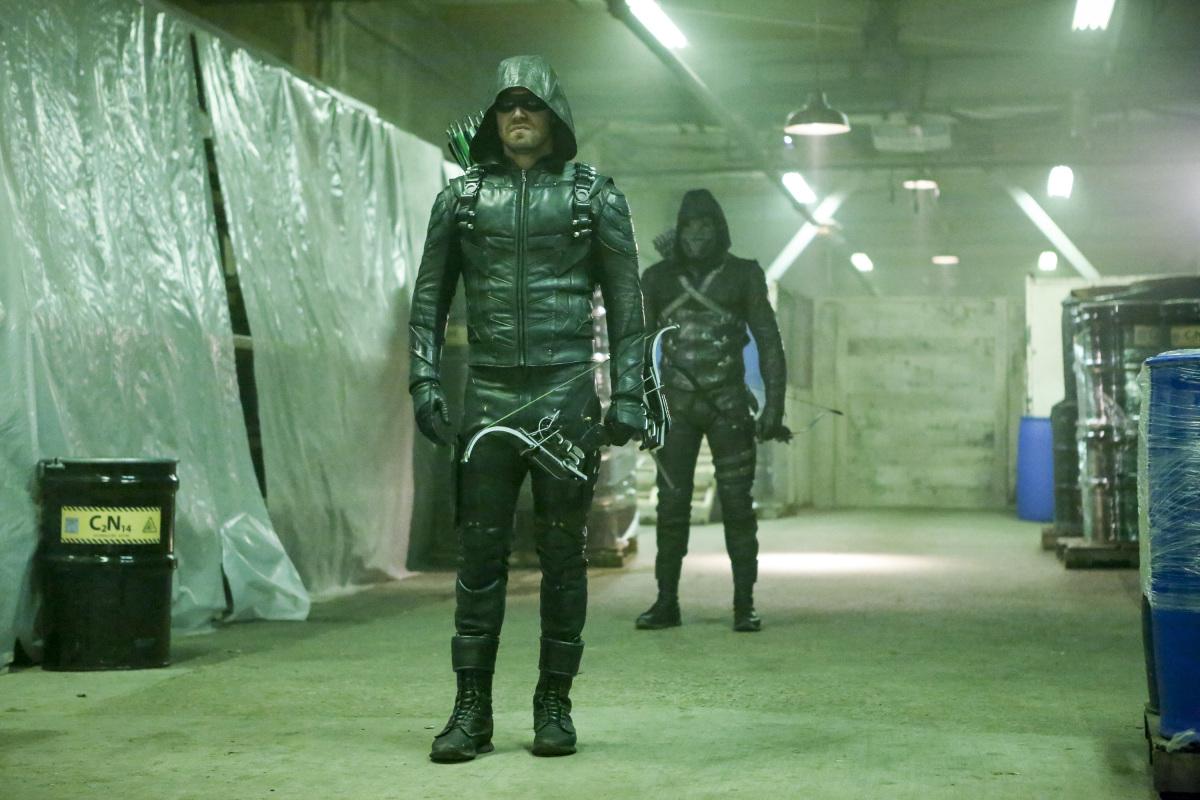 Laurel is sent to a secured ARGUS facility because Oliver wants to keep her close, so he can keep trying to find the good in Black Siren (aka Katie Cassidy might grace us with a redemption arc in the future). Oliver also decides to honor original!Laurel’s dying wish to find a new Black Canary. Thankfully, in Hub City, there’s a woman (Tina Boland) who apparently has those powers (at least I think so… more on that next episode).

Now that the main story is over, time for B, C, and D plots that weren’t so interesting. Diggle is still in trouble for some fake accusation from early on in the season. The District Attorney goes against some top military man (clearly evil) to keep him around. There will be some retribution there, I’m sure. Curtis’ rough time continues as he keeps being beaten up in fights. This is on top of his husband leaving him in the mid-season finale. Thankfully, he can still contribute to the team technologically (he is still a genius after all), especially since he built the dampener that had kept Black Siren captive in the first place. There’s some bonding between Curtis and Renee. It’s not just me, right? She looks like Carrie Fisher?

Back in the Russian flashbacks, Oliver is beaten to a pulp by nameless Russian Mobster #525600 – he’s a boss, I think – because he wanted to murder that Kovar guy out of revenge. At the last second, yet another archer comes and saves the day. (I’m absolutely shocked at yet ANOTHER archer in this show). Oliver tries to focus on her face, but sees Laurel for a second (who looks eerily like Carrie Fisher in this shot), before the person revealing herself to be… ta da… Talia Al Ghul.

“Who Are You?” worked mainly because of Dinah Laurel Lance. The promo for this episode had already shown last month that it wasn’t exactly Earth-1 Laurel back, so the mystery wasn’t really a big part of it for me. I love Katie Cassidy so I like having her around, but as stated, I don’t know what can happen to keep her fresh. The reason why I think her last appearance worked – Arrow’s one fourth of the crossover – was because it was an emotional episode that could have provided closure (or at least as much closure as one can get after a loved one is murdered) for both Sara and Oliver.

I don’t know if they will try to give a redemption arc for Laurel, but if they do, I have my reservations. First, she can’t just replace our Laurel and at least everyone seems aware of this. Second, it can’t be poorly done. This is a woman who has turned bad a long time ago and has been portrayed consistently as such. The writing team needs to step up and take this seriously to make her an interesting character on her own – not just a shadow of our beloved Laurel.