If you’re at all caught up with Detective Comics, then you probably know where this article is headed. There’s been some, to be perfectly frank, confusing and irrational discourse across the DC fandom as of late (shocker, I know). Now that the dust has relatively settled from last week’s bombshell (pun absolutely intended, even though that series is sadly ending), I want to formally throw my hat into the ring.

And by “throw my hat into the ring” I mean “objectively disprove the vast majority of nonsense being spouted about Kate”. Because that’s what most of this is. My take on the matter, in brief, is the title of the article: Batwoman was right.

What was she right about? Well, in the event that you need a refresher: That’s the end of Detective Comics #973, the fallout of which is bleeding over into last week’s Detective Comics #974 and presumably all the way up to the end of Tynion’s seminal run (which concludes in May, I’m sorry to say). So, let’s approach this as clinically as we can by starting with the widely cited argument against Kate’s actions: it was “out of character”, or OOC. And let me tell you, Kate killing Clayface was about as far from OOC as anything really could be. Note that I am not using the word murder, because that’s not what she did. Legally, it would be classified as “justifiable homicide”. Which is, you know, how soldiers and police officers are supposed to operate. While it’s true that the term OOC has lost most of its meaning due to fandom’s excessive use of it, this is still something that needs to be addressed. On the whole, OOC, in discourse terms, normally means “what this character did isn’t what I wanted them to do” or something along those lines, but that doesn’t mean that it’s entirely subjective. The instances where someone claims a character is OOC and backs it up with textual evidence are relatively rare, but that method works both ways. If one is to claim an action or behavior is OOC, you need to be prepared to cite why it goes against what we know about said character.

Kate trained to be a soldier, and it’s something she never left behind. It was never something she wanted to leave behind. She operates best when in a unit, and she’s far more suited to the role of field commander and teacher than Bruce ever could be outside of a one-on-one basis, and even that is debatable. It’s why Bruce brought her into the Knights to begin with, remember? 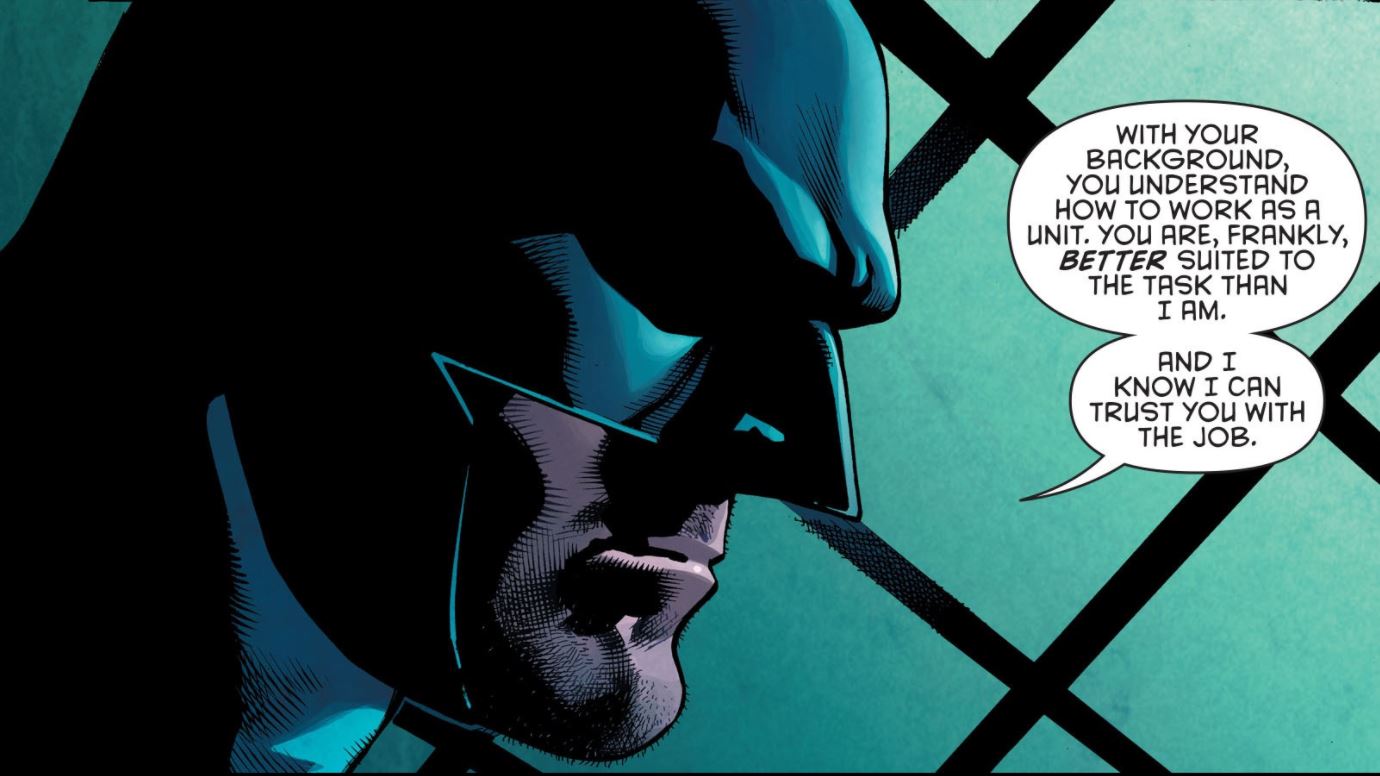 Bruce is no soldier, and his “one rule” has always been childish and ineffective. It’s a false moral high ground, since Arkham is hardly an effective rehabilitation facility. Yet that’s sort of the point of it. It means he’ll never “win” his war on crime (not that he could anyway), but it also gives reason for his absolutely ridiculous methods of avoiding killing.

So if he knew that Kate was the person she was, and he did, why would he bring her in if he wasn’t willing to accept that there are instances where he can trust her judgement? He doesn’t need to be happy about it, but it’s not like Kate is trigger-happy and kills every criminal she sees. She’s killed before, but it’s one of the last things she does because that’s not what the “bat” represents. And she knows that, hence why she doesn’t just slap another symbol on her uniform after Cass tears it off. We’ve even seen this dynamic play out before, way back in Batwoman Begins.

Did Kate know that multiple shotgun shells to the face wouldn’t actually kill a Monsterized Simon-sans-Garfunkel? Nope. But she did it anyway, since he just turned into a giant monster and was going to kill the Batman. Bruce’s reaction is…rather minimal, and I’m willing to bet that even if she had killed Simon, he’d just be kinda grumpy for a bit before acknowledging that it was a decision that he could never make, but he trusts Kate’s judgement. You know, because he does? Circling back to the circumstances surrounding Basil’s death—actually, you know what, let’s just have Kate explain her reasoning for it. 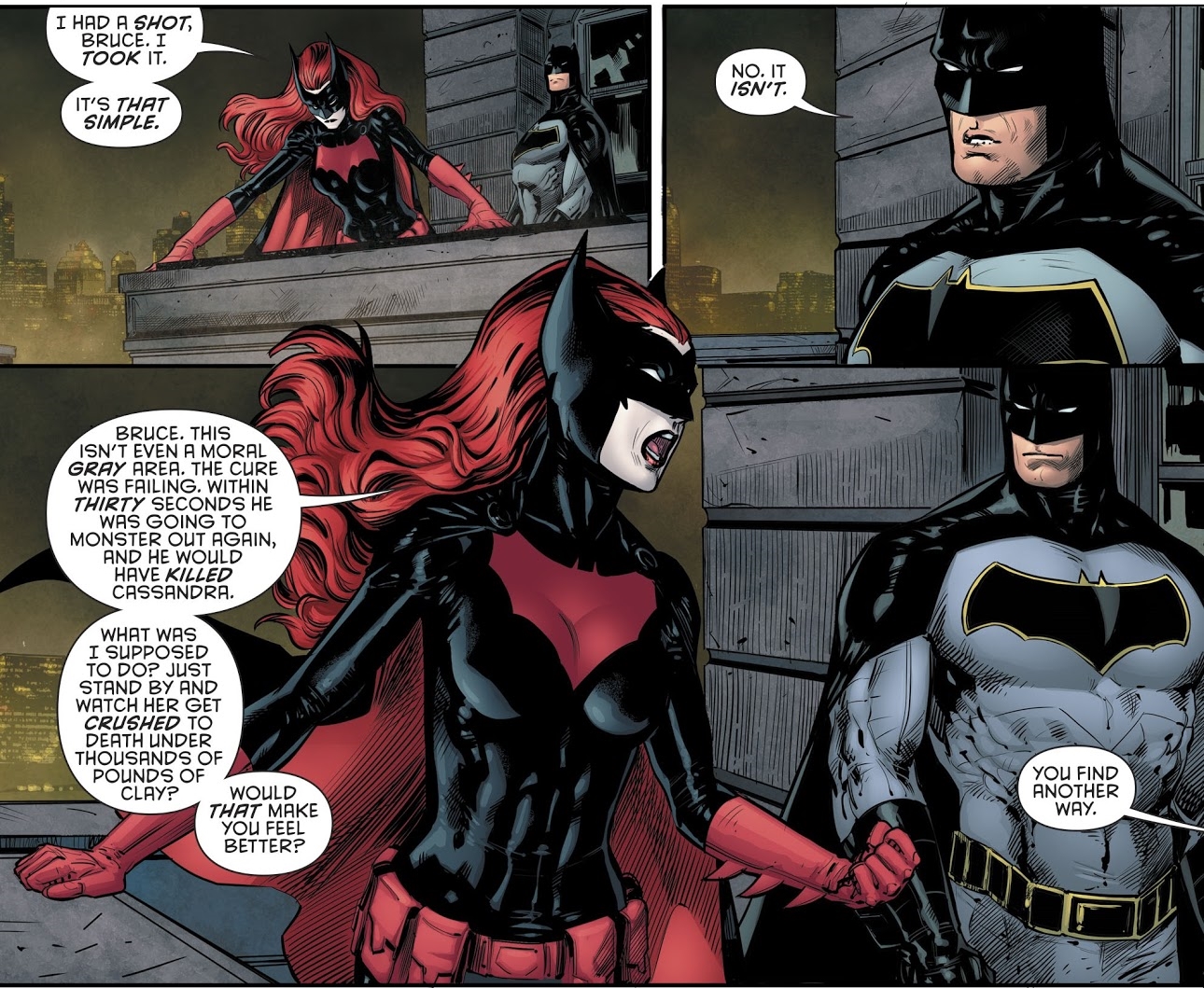 And then Tim goes on to say that it’s their job to be better than everyone else, which means no killing and always finding another way—okay, honestly, I’m just going to let this one play out. I can’t really explain this any more succinctly than Tynion did himself: No one is demonized in the rest of the conversation, and everyone gets a chance to voice their opinions. And they all make sense. Additionally, if you take a closer look at Bruce’s emotional state, you’ll note that after his initial shock and yelling he almost instantly calms down once Kate explains her actions and reasoning. Almost as if he recognizes that she’s making a lot of sense even if he can’t accept it at a personal level.

So is it OOC for Kate to have killed Basil under these circumstances? No. Basil was unable to control his actions, and mindlessly killing thousands by the minute by flattening entire buildings. Bruce had zero other ideas, and calling in the JLA would mean hundreds if not thousands more would die before they got there, assuming they were available at all. Dr. October’s cure was designed to work on a regularly sized Clayface, not a kaiju, and they all knew it would likely only be a brief moment of respite from the destruction, as per Dr. October’s own admission. This isn’t even acceptable losses; it’s (as Kate said) the same call any soldier or police officer would make.

There were no other options, and that’s exactly the scenario that Kate would kill under. That, and threatening her immediate family. Thus, her choice was the right one, even if it was a painful one. Bennett’s Batwoman series has constantly been asking “what can Batwoman do that Batman can’t?” and the answer has always been simple: