I have a fave. It’s a problematic fave, even; not everything can be Steven Universe. But I’m not going hang a lantern on its problems today. Because sometimes a little levity is nice. So instead, let me tell you about the best parody the world has to offer: Burning Love. This is a web-series (which also aired on E! for a time) that satirizes the popular ABC franchise, The Bachelor. It is currently available on Hulu Plus, or for purchase by season via Amazon Video.

Burning Love has three seasons: one for a typical Bachelor season, one styled after The Bachelorette, and one for the Bachelor Pad. For anyone who doesn’t know (lucky you), The Bachelor is a reality dating show, where twenty-five women compete to become the fiancé of one man, who is an eligible bachelor. It’s an exceedingly clever title. The Bachelorette is the same thing, but the genders are flipped. These bachelors and bachelorettes, aside from the first dude who was just a dude, are typically the most popular or marketable contestants from past seasons. So like, the first season of The Bachelorette starred the runner-up from The Bachelor, though the #3 choice would totally have been more popular.

Then there’s the Bachelor Pad, which I think is now called Bachelor in Paradise or something. This is where fan-favorite contestants are all shoved into a house together, and the idea is that you try to find love while also competing for a cash prize of $250,000. It’s weird, and there’s random challenges that are unrelated to each other. I think there’s 10 male and 10 female participants, or something like that.

The true brilliance of Burning Love, however, is that you really don’t need any base knowledge of that franchise to find the parody humorous. You get the idea that everyone on it is an exaggerated version of common reality show contestant personalities. Given how much these reality shows permeate our culture, the jokes still land. It’s made better by the fact that the Burning Love actors are some of the most talented comedians, and they’re given free reign to ad-lib many of their scenes.

However, for those of us who do know The Bachelor franchise at all (blame my sister), let me just say that this is quite possibly the most on-the-nose parody I’ve ever seen. There are characters who are just flat-out lifted from seasons, plus situations that are strikingly similar: 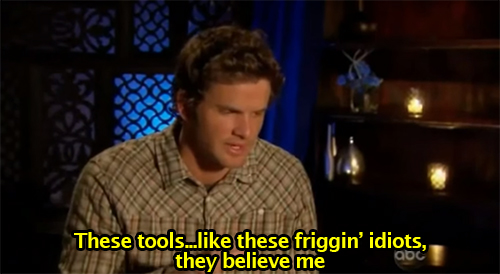 Bentley Williams from The Bachelorette Season 7

Even more, it’s the little nuances. It’s the way the host “Bill Tundle” takes the mannerisms of Chris Harrison and embellishes them in just the slightest way. It’s how they lampshade the product placement that ABC clearly thought they had been so sneaky with for their own franchise. It’s how 9/10 of the participants in the first season are “dental hygienists,” which if you’ve ever watched an opening episode, does seem to be the profession-of-choice for Bachelor contestants.

Everything that makes The Bachelor so quintessentially what it is was pulled into Burning Love, tweaked just enough to emphasize the absurd, and then played straight by the characters. 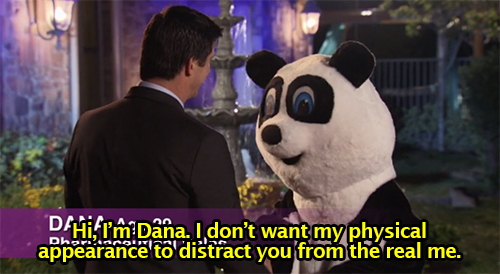 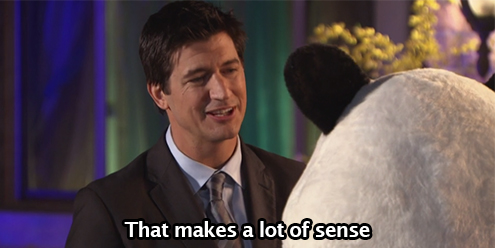 It’s also easily one of the most quotable shows there is. Julia and I regularly tell each other that we “gotta bounce.” Bill Tundle’s “but here’s the twist,” mantra of the final season is not easily forgotten. And of course, we have this:

Okay, full confession: yes, focusing on levity is nice, but if I’m being perfectly honest, I did set out to write a “problematic fave” post for this show and failed. Because somehow I’m not even offended by the stuff that it so obviously offensive. The contestant in the gif above, Carly, is a closeted lesbian who hits on every single one of other girls in the house. She works as a WNBA coach. She talks about her love of the Indigo Girls and camping trips. This is a walking, talking stereotype, and yet I love everything about her. Maybe it’s just that it’s dialed up to eleven, so it bypasses the ability to actually insult? The joke is more how she has to navigate this situation?

Just please trust when I say that the comedic value of Burning Love is that damn high that this is somehow acceptable in my eyes. Though I will say there is transphobia surrounding the scripting of Ken Jeong’s character that, while short-lived, is not something that should be excused.

But seriously, even the line “After the show I did find love with fellow contestant Carly, and it was so much fun being a lesbian! But after a few months I decided it was probably best to end our relationship,” is funny in its context. Oh and thanks to the brilliant character of Zakir, you will now be saying “lesibian” from here on out. How did this happen?

I should warn you: you’re going to fall in love with an actor. Her name is June Diane Raphael and she is absolutely everything. She plays Julie Gristlewhite, the “damaged darling” contestant in the first season, who has a habit of bursting into tears.

Which yes, is a very common personality present in The Bachelor contestants (or at least, they make it seem that way with sneaky editing). Julie goes on to become the bachelorette for the second season, and absolutely does not disappoint.

“Since Mark’s season, I have changed a lot about myself. Mostly my hair color.”

She nails the comedic timing of absolutely everything, whether it’s the completely over-the-top montages of her preparing for her dates:

Water ballet relaxes her, but she has a fear of water. I can’t make this up.

Or the small background subtleties. Seriously, I don’t know how she doesn’t break into hysterics in every scene, but she just sells Julie Gristlewhite.

Ken Marino’s “Mark Orlando,” is another stand-out. He plays the bachelor of the first season, and is so good at portraying just how painfully stoopid this guy is that it only serves to highlight how ridiculous a show like this is in the first place. There are women screaming when he enters a room and being absolutely vicious in their desire to gain his attention, and this is someone who says that he’s looking for a woman who can “make him laugh but isn’t afraid of robots.” What.

Still, I’d argue it’s the third season, where he views himself as the “big man on campus,” that he truly shines, especially because it’s just so obvious he’s a dolt:

Which yeah, straight out of Bachelor Pad history:

Contestant Michael Stagliano discussing his strategy in Bachelor Pad Season 3. It blew up in his face, btw.

I’m not even sure I have the ability to explain to you how thoroughly inane Bachelor Pad is and how well Burning Love handles the material. Suffice it to say that the contestants explaining their winning strategy for the great fruit race rings disturbingly true: 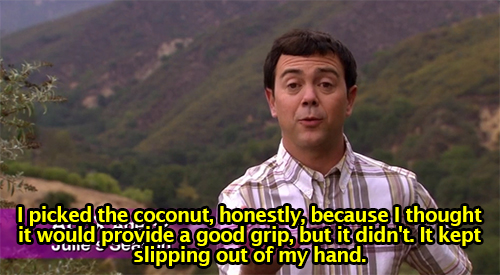 And I’m sorry, but there isn’t a soul alive who can’t find some enjoyment out of this: 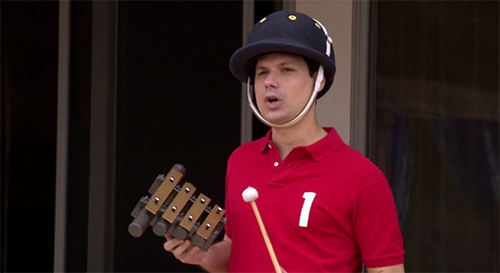 This is the most toned down thing he wears.

But all in all, what this Burning Love does so well is absolutely shred the saccharine narrative reality dating shows have been selling to us for years, and it does so with humor (unlike, say, Unreal, which I also heartily recommend). The cheesy introductions, the dramatic music, the absurd dates that are somehow supposed to be romantic, the over-the-top elimination ceremonies…all are mocked so thoroughly, while also being funny in-and-of themselves.

Plus there’s something oddly exciting about the way that these characters grow and feed off of one another within the most bizarre framework imaginable. By the time you get to the final season, these people, that should be no more than caricatures, somehow begin to feel real, and their interactions with one another just fly off the screen. Which yes, means that rewatch value is incredibly high. And that’s not something I say lightly.

This is the show you both want and deserve. It’s beyond perfect; not just a fantasy or a fairy tale, but:

All images courtesy of Abominable Pictures and Red Hour Films