With the exception of Jessica Jones, when it comes to the MCU, I’ve taken a rather “well, it’s enjoyable enough” approach to everything. I don’t think Agents of SHIELD (AoS) is exactly top quality television, but damnit if I’m not diverted! And this was the exact same thing I thought of Agent Carter’s first season.

Peggy Carter is a wonderful character who certainly brightened up all our screens with her first appearance in Captain America: The First Avenger. I had misgivings about another MCU show suspiciously lacking in superheroes, but with its 1940s setting, there wasn’t a need to explain a lack of Avenger intervention, the way there has been throughout AoS. Agent Carter was able to easily find its own footing by focusing on like…stuff a spy would actually be doing, as well as its exploration of gender politics that Peggy’s character and the time period inherently lends itself to.

But while I could talk your ear off about Leviathan or Howard Stark’s black market dealings, it’s the characters that served as the driving force of this show. And I’m sorry to say it, but it was two in particular: Peggy herself, and her best friend Angie Martinelli…no offense, Sousa. You seem super nice (without the trademark and everything).

I could write accolades on how refreshing Peggy is as a character. She’s a badass, capable woman who not only doesn’t shy away from her femininity, but embraces it. She was a bit of a slayer of the Not Like Other Girls trope. I mean yes, she’s a highly trained spy, but she’s also someone who is so much like other girls that she moves into a goddamn boarding house with all other girls and bonds with these other girls throughout every single episode and the fact that she is so similar to them and has all this positive goddamn female interaction allows her to go completely unnoticed in what she’s actually doing, not to mention this saves her ass a few times. I feel rather strongly about it.

But even beyond trope-busting, Peggy was a very realistically penned character. She can get tunnel-visioned and she can get snappish when pressed. She also truly believes that she has the best answers, and is not shy about putting her plans into action, even when she doesn’t have approval, which is a touch of a problem. And she keeps her own counsel to a fault. This is the rounded protagonist we all deserve. 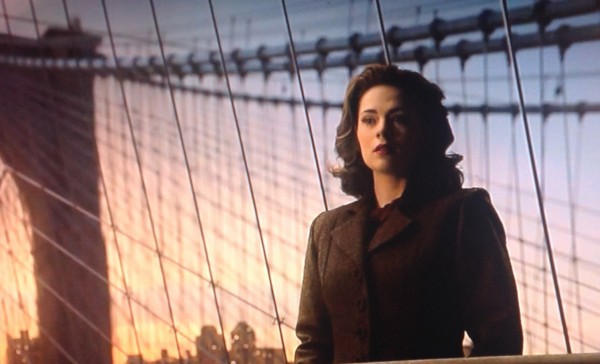 Then, there’s Angie Martinelli, her friend: the sass-talking waitress/actor wannabe who is simply unwaveringly there for Peggy, whether it’s letting her cry on her shoulder after a rough day, or outright lying to government agents so Peggy could escape them. Which, btw, after that, she didn’t even ask for an explanation (though Peggy promised that one day she’d get one). Angie was just so impressed that there was more to her friend than met the eye that she became inspired to not settle in her own career. When do your faves ever?

Okay, I’m missing the elephant in the room: there was queerbaiting with their relationship. I think. It was right on that line of playing up romantic elements with no intent of a follow-through, and writing two female characters packed with agency who complemented each other rather uniquely, so perhaps it merely presented in a more romantic way than it was planned.

But homoerotic subtext aside, there is no mistaking the fact that Peggy’s internal struggle with grief and understanding of self was the focal point of the season, with her external struggles (with Russian spies, I guess), acting as merely the backdrop. And Angie fit perfectly into this, almost serving as Peggy’s heart. She was the one our protagonist could let her hair down around, even if there was a major secret between them. 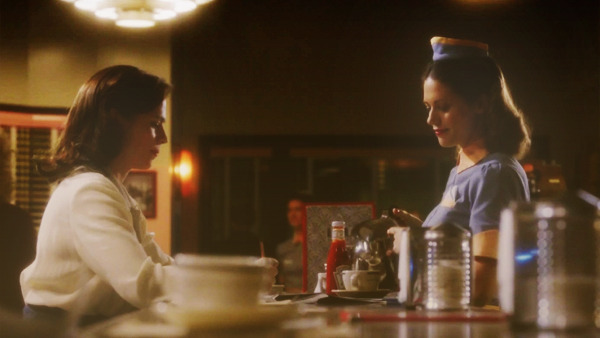 It’s no mistake, either, that the season ended with Peggy inviting Angie to move in with her.

No seriously, I did ship it, but I had absolutely no delusions that this ship would ever sail. However, what I did expect was this show to continue along somewhat of the same trajectory into its second season. I expected internal character journeys. I expected to see somewhat sharp dialogue. I expected an exploration of gender politics (which is kinda there?). I didn’t think any of this was unreasonable…this was the show I had watched, after all. I really didn’t think my expectation to see Angie Martinelli again was particularly reaching. She was canonically the closest person emotionally to Peggy last season.

Um, well, I’m not sure what’s happening right now on this show at the moment. I’ve caught up on the first four episodes, and holy crap. The season opener was downright bad. I mean so bad, I checked Wikipedia to see if the writers had all changed hands or something. They hadn’t.

It’s a bit hard to explain what my biggest issue is, but overall the tone is just…weird. Like, really weird. It’s as if the writers felt they needed to stick some kind of comic relief in every single scene. Edwin Jarvis is the worst example of this, as he is kind of getting Bolin (Legend of Korra) Book 2 treatment. He goes from being humorous as a result of his neuroses and lack of “fit” when juxtaposed against a highly trained field agent, to a dude who is suddenly chasing flamingos, made uncomfortable by his wife’s displays of PDA, and who says that he’s “Jarvelous” before passing out. Can I have the guy back who was patching up Peggy’s bullet wound while telling her that she was putting too much on herself?

Also, in an attempt to shove in as many quippy moments as possible (if you could call it that…I have yet to crack a smile at their attempts of humor so far this season), there’s something almost frantic about the pace of the dialogue. When we first met Jason Wilkes, who as far as I can tell, is a scientist we’re supposed to take quite seriously despite the fact that he immediately shoves a beaker of home-brew in Peggy’s face, I seriously sat there wondering to myself if part of his characterization was an addiction to methamphetamine. It’s calmed down a little bit by the fourth episode, but it’s still just a tonal whiplash to Season 1, where the quiet moments were actually the ones that stood out because they were given the appropriate space to breathe.

But the real issue is Peggy’s scripting herself, because there seems to be next to no focus on any kind of character arc. Like, they chuck roadblocks at her to slow down her investigation of Chadwick, or zero-matter, or whatever this plot is supposed to be that conveniently cross-promotes Agents of SHIELD, but she just…sidesteps them by the end of each episode. Everything she does that would have actually had lasting repercussions last season earn her the help of everyone around her now. There aren’t any close, emotional moments, because there’s so far been nothing for her to be emotional about. Peggy is merely a spy, doing spy shit. Which is fine, totally. That can be enjoyable, though I’d argue the science needs to be slightly less ridiculous to sell this as a straight-plot. But the fact is, Season 1 was centered on characterization and internal journey.

This is why I think the absence of Angie Martinelli this season is a complete mistake. I spent the first three episodes convincing myself it was only because of my shipping goggles I felt this way, which is why I haven’t even written about it until now. I was afraid I was too biased, but like…no. This is not a good choice. Angie as a character—her “plot function” even—forced the writers to put the emphasis on Peggy’s own character. Angie was there to be the emotional support because Peggy actually required it!

Even if they didn’t want it to be Angie in that role (which is simply bemusing given the effort put into building up their friendship), there still needs to be someone that can serve to provide us insight into Peggy’s head. Or a reason for us to want that insight. Because seriously, do we have any cause to think there’s something going on in there beyond the mission right now? Also, it’s really quite difficult not to feel the loss of this positive female interaction, especially given that the time-period is more sexist than our own. Without it, the vibe goes from Peggy Carter the trope-buster, to Peggy Carter the Smurfette.

What’s truly mystifying is that the most recent episode is one where we finally get flashbacks for Peggy. They are showing us her roots and formative experiences. Yet in absence of a character journey making itself known this season, I can’t figure out why. Especially why now? It’s particularly noticeable in the fact that they transitioned between the flashback scenes as if they’re providing context for Peggy’s current motivations. Like, one flashback will end with her turning her back and walking in Direction A, and then it morphs into “current day” Peggy also walking in Direction A. But it doesn’t actually mean anything! What does her brother telling her that her fiancé is boring possibly have to do with her dealing with governmental red tape? And don’t get me started on the “Not Like Other Girls” implications of her first flashback, which is basically a 180° from how she’s been scripted up until now.

Now look, this show is not a total loss this season, because there is one character they are actually putting creative energy into, and her name is Whitney Frost. Frost also was given flashbacks in this episode, and holy shit were they effective when you see what’s going on with her story. But as a result, I’m now more interested in her than Peggy. It’s a problem when viewers of a show want the title character off their screens to get to the interesting stuff.

I don’t know. Maybe I’m being really harsh. Maybe there’s a building anxiety in Peggy that I’ve been overlooking, and it’s all going to come to a head towards the end of the season. Maybe her lack of personal connection to the plot (unlike, say, running around with a vial of Steve Rogers’s blood in her hands) is supposed to be a point in and of itself. Maybe the jokes were always this hamfisted, and I only laughed because I was ship-happy. That sounds like me.

All I know is that this is not the show I enjoyed last year. Apparently Agent Carter’s renewal hadn’t been a sure thing, and maybe part of that is because they only had planned out her character arc for one season. It certainly feels that way. I do sincerely hope that I’m eating crow after the next six episodes, but for now, this is not Jarvelous.