I don’t often write gushing reviews, and I certainly never expected to write one for this MCU series, but I have to say; I liked this one. A lot. It’s hardly perfect, but no movie is. I’m already looking forward to seeing it again.

The question is, of course, why? Why was this film so successful when the others I’ve seen thus far were perhaps less so. What did it do right?

Well, the most important aspect is probably the most obvious: it’s the characters, stupid. I buy them, and I buy their relationships. And, very importantly, they are “good” people, who I may actually have a chance of caring about. The villain is, perhaps, not quite as interesting, but you can’t really beat Nazis with plans for world domination when it comes to action movie villains, and I don’t care who knows I think so.

Let’s start with the the title character, Captain America, aka Cap, aka Steve Rogers, aka second hunky blond dude who could play Daemon Sand in as many movies.

I like him. He’s a good guy. He’s strong in the real way.

That was the entire point, of course, that he is an unlikely hero, someone who’s been weak and can therefore have compassion for the people he will protect. And never be a bully. This was lampshaded when Dr. Erskine, who I prefer to call Wacky German Scientist (WGS) asked him to make sure he was still the same man he was when he said, “I don’t want to kill anyone. But I don’t like bullies.”

And he does stay that guy, although I suppose one can argue it’s because the movie stops focusing on his character development once the action really gets started.

There are three relationships that are important to Steve; WGS, his BFF Bucky, and, of course, Agent Carter.

We’ll start with WGS. This is another character whose goodness made him more compelling. Plus I was quite happy to escape from the “power man was not meant to have” trope that so characterized The Incredible Hulk. In this film we see the same power, wielded by WGS, used for both good, with Steve, and evil, with the Red Skull. The “evil” is not the “I Can’t Believe It’s Not Science”, it’s, you know, in the human heart.

WGS’s conviction that Steve was the right man for the job, because of his strong character, gives Steve the faith to become Captain America even more than the Mystery Serum did.

Seriously, though. How is he not covered in stretch marks?

And the way their relationship was established was very effective. Especially given how little screen time was devoted to it. I legitimately teared up when WGS got Hydra’ed.

Bucky also has a faith in Steve that he really needed, but it’s a little more complicated because Bucky is also almost limiting to Steve, at least early on in his arc.

This seems like a stupid thing to say, because telling your friend with multiple medical problems and little physical fitness that maybe he should stop breaking the law, and his own heart, by repeatedly trying to enlist, is not an unreasonable thing to do. But his protective paternalism was not what Steve needed. That was kind of the Aesop of the relationship, outright stated towards the end of the movie: wanting to protect people you love is admirable, but sometimes you have to let them make their own choices.

Playing around with protective paternalism is also important in his relationship with Peggy Carter. I like her too.

I still have many questions, like just what IS a British woman doing in the US Army, and what exactly is her job, (should we call this the Princess Leia Effect?) but I like her anyway.

There’s a moment that I really liked when Carter was shooting at the oncoming car of an evil moop. Just when the game of chicken was about to turn ugly, Steve pushed her out of the way. When she protests that she had him, he doesn’t say “you were in danger and I saved you,” he said “sorry”. And this is clearly a parallel to decisions that Bucky and Steve both make later in the film—decisions to place themselves in harm’s way.

Carter, who is told more than once that she is “Not Like Other Girls,” is strong and capable because she so clearly IS entirely like other girls. Discussing this trope tends to get me in trouble, so maybe I should leave it there.

In any case, the romance she has with Steve works all the better for her being a well-rounded character apart from him. This is despite the mild annoyance I felt about the whole mutual jealousy thing. First Steve is jealous of Stark Prime (now I know where Tony gets it) because he thinks Swiss food is a euphemism for sex, and then Peggy is jealous when Natalie Dormer (who really branched out with this role) throws herself at Steve. How exciting. Like, seriously #monogamistssofragile.

But I do completely buy that these two would develop feelings for each other. And I appreciate how the writer clearly cared enough about Carter to establish that these feelings were developing before he became hot. (Very hot.)

Yes, they somehow managed to fit in a bromance and a romance and made me care about both. Take notes, other MCU writers.

And I guess that’s what I really liked about this movie, the writing. It’s no secret that I think a good piece of media is always a well written one. Nothing can save a bad script, but a good script can still shine, even when acting, and special effects, and direction aren’t as good. And the acting, special effects, and directing were more than passable in this movie. Combined with a script that gave a fuck, well, you get a good movie. Let’s face it, the “unlikely hero” story is rather pedestrian, but it’s elevated by the attention to detail.

For example; Captain America’s classic red, white, and blue costume is rather ridiculous. It is certainly completely stupid if you want to be in any kind of combat situation. The USO thing they did made it make sense, and it furthered his character development and the theme of feeling useless and not living to his potential. (Although propaganda work like that was not useless. War Bonds were damn important.) This gets a little silly as he continues to wear the suit (although a lot less bright) when he’s a super commando, but it kind of goes with the ragtag team of unique characters thing they’ve got going on.

The Star Spangled Man with a Plan, you guys.

I really enjoy Hydra as a Big Bad; I really hope they keep showing up. I love that their leader’s name is John Smith, and the Nazis weren’t Nazi enough for him so he made these Super Nazis who salute with two arms! They’re so badass that they can be foiled by the fact that a little boy took swimming lessons!

I kind of love it. And the integration with the rest of the MCU didn’t make me roll my eyes this time. A dude like the Red Skull totally would be into super weapons from outer space. I accept it.

However, there were a few moments that they caused me to scream at the screen in confusion. Like, did Hydra take over Germany after those Nazi guys were fried? If so, why was it only the rag-tag team going after them? If not, and they were now separate, where did they get their massive amounts of resources? Do they have access to new recruits? How did they have access to all these futuristic materials? They couldn’t have come from the cube thing. Was there other Asgardian stuff they discovered? Who funds them?

None of this broke the movie, but I’m detail-oriented. And because this is a good movie, I’m willing to forgive it more than I am a stinker like Iron Man 2. Yes, goodness is ineffable, but that’s just how it is.

I sincerely hope that this level of quality is maintained moving forward. 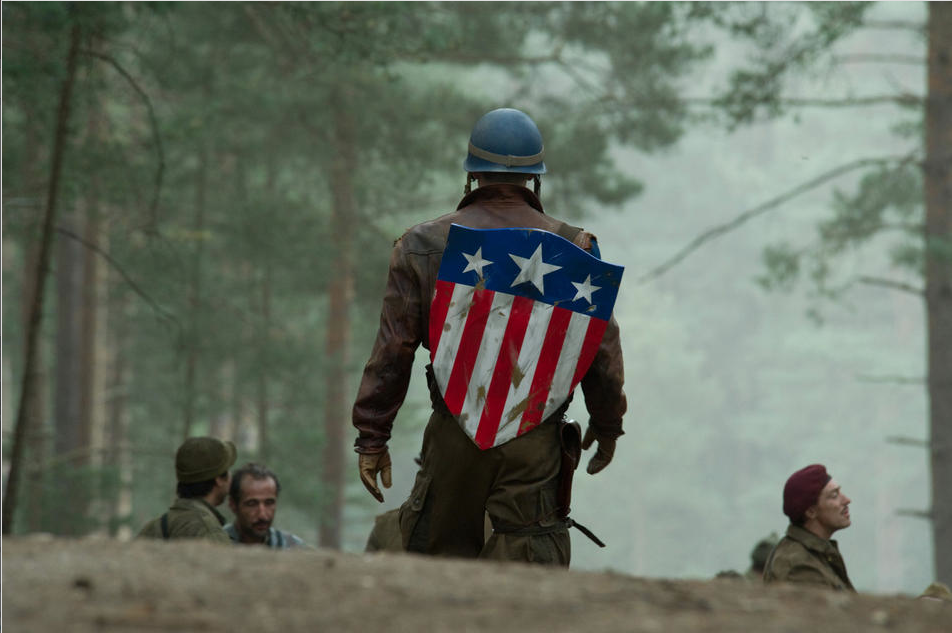 Up next is Agent Carter, which is a series, so it may take me longer than a week to get through all of Season 1, but I will try. And I will also like to remind our beloved readers that there is a special level in hell for people who spoil the MCU for me, either in the comments, on tumblr, by having a sky writer write over my house, anything. Don’t do it.