I don’t know much about comics. I read The Hedge Knight graphic novels and that’s about it. But I do know there’s this thing that they call “The Dark Age.” This was the time around the nineties when comics became dark and grim and mature, and the line between hero and villain started to blur.

This is to say that, yes, the first season of Daredevil did this well.

Matt Murdock, aka the Masked Man, aka the Devil of Hell’s Kitchen, aka Daredevil, has never really been one of those morally upright heroes that people always envision when you say “comic book hero.” He doesn’t save the world; he’s just trying to help one neighbourhood of one city. And he does it from the shadows.

The “hero” he most resembles to me is DC’s Batman, another darkly dressed vigilante with emotional baggage. But Batman, at least in the form of him I’m most familiar with, was primarily a guy who solves mysteries and uses technology is interesting ways. Daredevil’s thing is mostly to beat people up. And he’s against killing, but, like dude, there comes a point where this line you won’t cross is a little meaningless. I think it’s around the same time you throw a dude off the roof and put him in a coma.

You know who else reminds me Batman? Wilson Fisk. He’s a rich guy with emotional baggage, who values his privacy, and wants to “clean up this town.” He’s also super fond of beating people up. He also struggles with the implications of his motivations and actions.

But the thing is, there is no really ambiguity here. Murdock is the good guy, and Fisk is the bad guy. How do I know this? Well:

Matt: I’ve been preoccupied of late with, uh, questions of morality. Of right and wrong, good and evil. Sometimes the delineation between the two is a sharp line. Sometimes it’s a blur, and often it’s like pornography: you just know when you see it.

Murdock may do the wrong thing sometimes, but there was never a point where his behaviour made me not want him to succeed. And, while I haven’t done an exhaustive search (because I’m afraid to), I somehow doubt Fisk is anyone’s Personal Favourite White Boy.

And it’s not cheap either, we don’t think Fisk is bad because he has a black hat on, or something. We spend time with him, we see the world from his perspective, we understand his point of view, and we know why he is how he is and does what he does. But we’re not on his side because we know…we just do…that for all his humanity and vulnerability, he is an evil man. And Matt Murdock is not.

But seriously guys, the way these two characters foil each other is a bit off the charts. 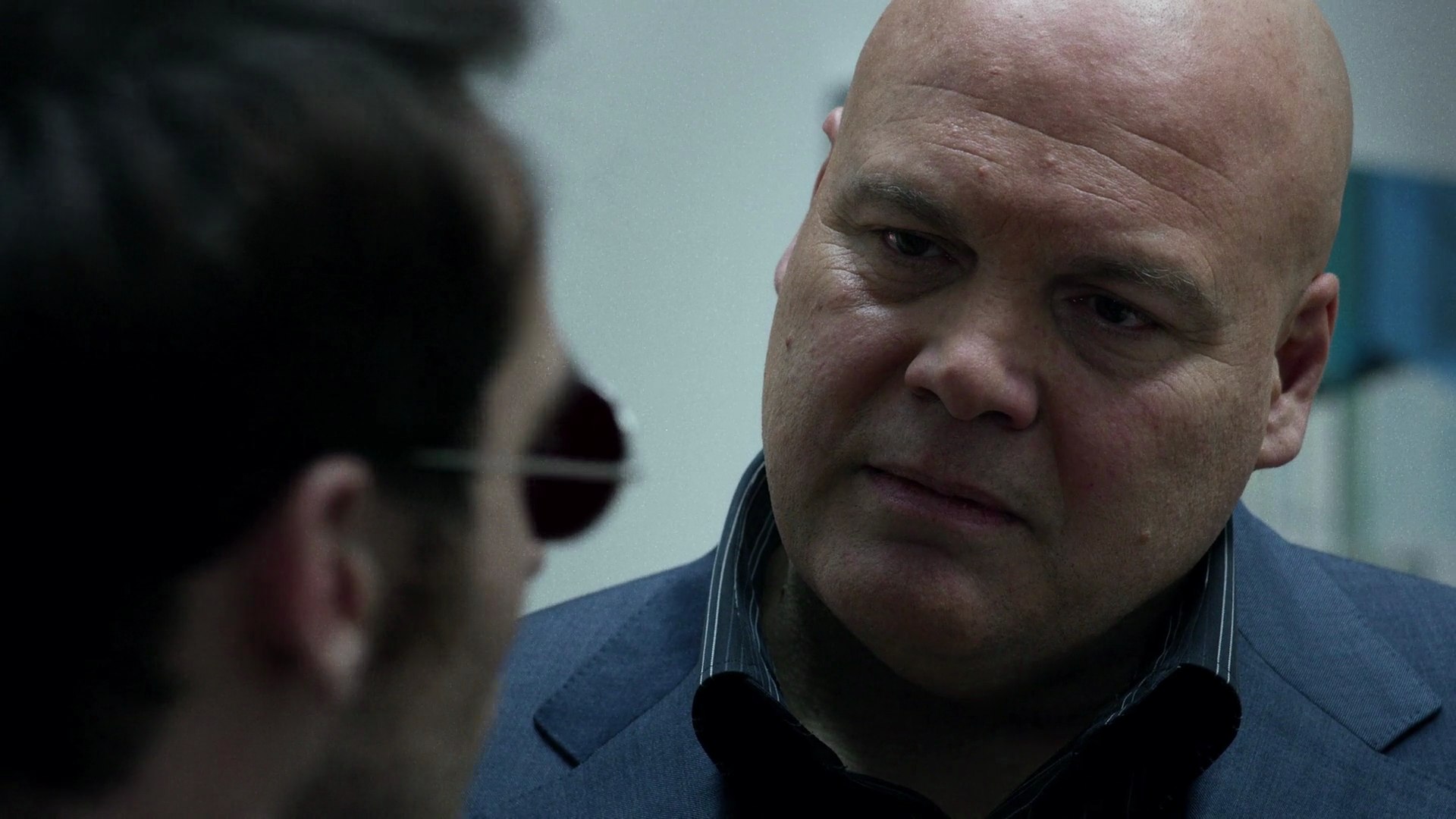 They both had their characters shaped by a traumatic experience. Matt lost his eyesight at nine when… some people decided to transport dangerous chemicals in unsealed containers through a heavily populated area? (Is there a story there?) Wilson grew up with an abusive father, who he killed after watching him hurt his mother was too much. Yeah, we watched a twelve-year-old brain a man with a hammer, and I doubt anyone was not on his side.

Both these experiences were clearly formative, and they determined the direction of their lives. Matt went through a period where he received some, like, ninja training, or something… but was told that he was too attached to people to be a real “warrior,” like his mentor, Stick the Professional Grump, presumably is. This lead to a wish to make the world better the “right” way, through the law. So he became a lawyer. One with the stated aim of only defending the innocent. However, at some point in the recent past, he decided that becoming a vigilante was a moral imperative.

Wilson’s guiding motivation seems to be “not being like his father.” He somehow managed to build this enormous criminal/financial empire, as a response to the poverty he grew up with. He didn’t want to be a “loser” like his dad was, who “put himself out there” in his failed bid to get a seat on the New York city council. He hides his past, to the point that he’s erased all records of himself, but he also never really moved past the day he killed his father, as the brilliant eighth episode, “Shadows in the Glass” showed so elegantly.

That episode was the turning point for him, when he decided to come out of the shadows, to own the good he desires to do. And this coincides with Matt’s soul searching in the following episode, “Speak of the Devil,” where he tries to own his evil, so to speak, and talk himself into murder.

This is where the theme of the nature of good and evil really comes in. Father Lanton’s story about the commander in Rwanda may as well be a story about Wilson Fisk, a man who sheathes his brutality in a terrifying kind of politeness. He will tell you how much he respects you, then beat you to death with his bare hands. He will say he wants to make Hell’s Kitchen a better place—he may even believe it—and in the same breath support sex trafficking mobsters and a deeply scary (yet oddly awesome?) old lady who blinds people and deals heroin in some kind of strange cult situation.

Matt Murdock, on the other hand, is doing good.

Matt: Then why did he [god] put the Devil in me? Why do I feel it in my heart and my soul clawing to be let out if that’s not all part of God’s plan?

Lantom: Maybe you’re being called to summon the better angels of your nature. Maybe that’s the struggle you’re feeling deep within you.

Matt: And how do you know the angels and the Devil inside me aren’t the same thing?

Lantom: I don’t, but nothing drives people to the church faster than the thought of the Devil snapping at their heels. Maybe that was God’s plan all along. Why he created him, allowed him to fall from grace to become a symbol to be feared warning to us all, to tread the path of the righteous.

And the path of righteousness is narrow. Very narrow. But we know we need the Devil to stay on in.

Fisk: [after recounting the Parable of the Good Samaritan] I always thought that I was the Samaritan in that story. It’s funny, isn’t it? How even the best of men can be deceived by their true nature.

FBI Agent #1: What the hell does that mean?

Apart from religion, there are also the people in these two men’s lives that shape their respective reflection and certainty. Matt had Claire. She heals him in a literal sense, of course, but she also is that thing that people all want from a partner. She supports him and listens to him. She’s the person he can be completely honest with. Wilson has Vanessa. He promised her he would always be honest with her, and he was. The strength and sincerity of his feelings for her are obvious. But Matt and Claire didn’t happen, and Wilson and Vanessa are here to stay. 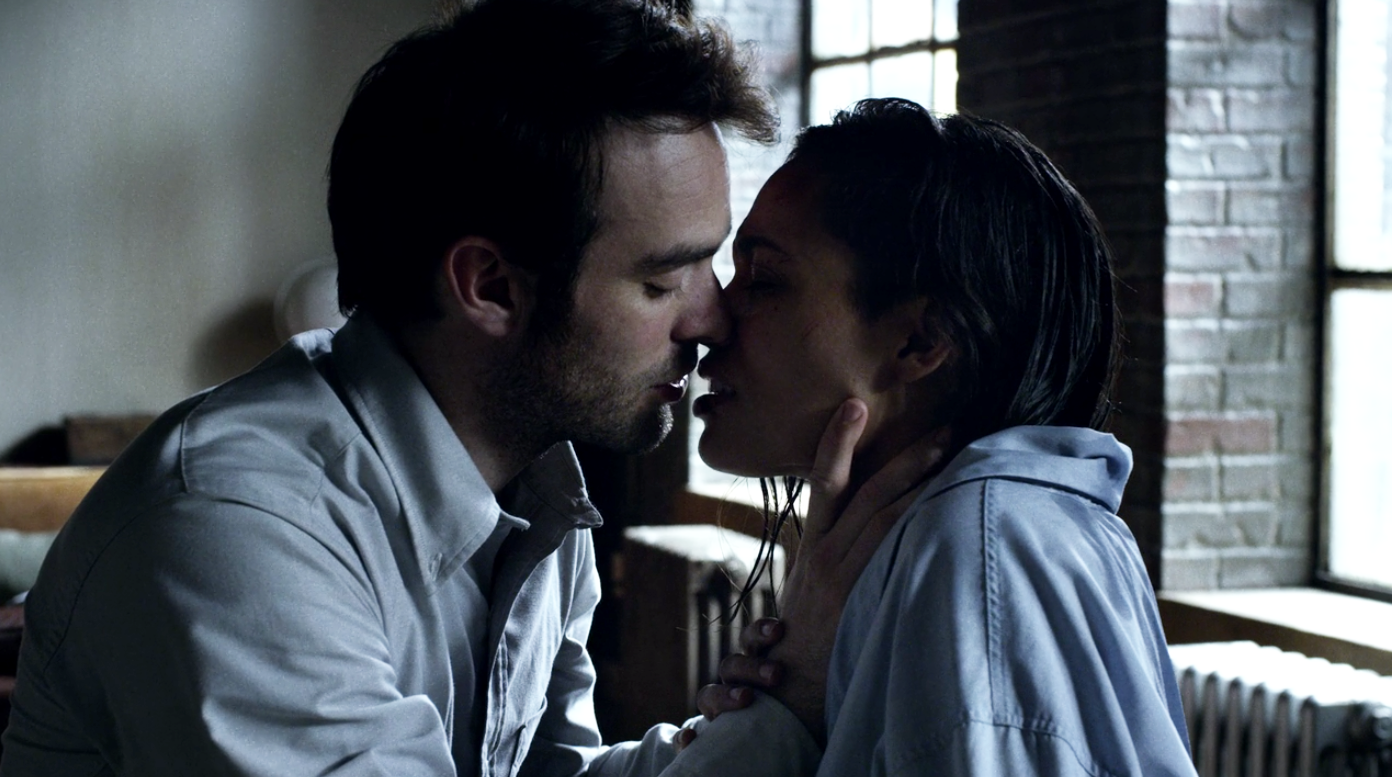 It must be because Claire challenged Matt. She told him she couldn’t let herself fall in love with a man like him, but Vanessa decided she could. Why? Because she loved him, I suppose. But what she really did was enable him.

The same kind of dynamic exists with their respective BFFs. Foggy, Matt’s law partner and long time friend, challenged him even more deeply than Claire did; he forced him to justify his path. To himself as much as to Foggy. Wilson has Wesley, the only person he ever calls his friend. And Wesley’s devotion is worshipful. He clearly actually cares about him, but I doubt Wesley has ever given Wilson cause to reflect on anything.

Images courtesy of Netflix and Marvel