How Dramaworld and I Met

Korean Dramas. Not a topic I ever thought I’d be discussing, but definitely not the answer my roommate was expecting when he asked, “What have you been watching all afternoon? Sounds intense.”

My go-to shows over the past few months have been Grey’s Anatomy, Breaking Bad, Better Call Saul, American Odyssey, New Girl, Once Upon a Time, The Returned, The 100, and Orphan Black. I’ve even checked out the Danish drama, Heartless. When you’re impatiently waiting for the next Doctor Who season to be aired, there’s a lot of time to search for a new fandom base to explore–months, in fact, seeing how BBC has not begun shooting. Needless to say, I am in need of a new show to enjoy, and Eurydice Howell played a part in helping me broaden my horizons.

I’m often eager to try watching shows I’m unfamiliar with. They might not always my cup of tea, but that’s okay. Everyone is entitled to their own likes and dislikes. Plus, you learn something new everyday, right? Over the weekend, I read Howell’s article, “My Fave is Problematic: Korean Dramas,” and I found myself intrigued and curious about this genre I’d never explored. Why not give it a go? So, I turned to Netflix… and found Dramaworld. *Spoilers Ahead*

Dramaworld is an American Web Comedy-Drama written by Chris Martin and Josh Billig. It’s important to note that the show is co-produced by China’s Jetavana Entertainment, Korea’s EnterMedia Contents, and Third Culture Content because of it’s cross-culture nature.  The show follows an American fan-girl who is zapped into her favorite K-Drama TV show. What’s fascinating about this plot is that it finds a way to balance drama television with meta-analysis. Something is amiss in the K-Drama, Taste of Love, and fan-girl Claire Duncan must use her knowledge of K-Dramas to fix the series.

Within the first three minutes, the stage is set. The show opens with episode 12 of Taste of Love, allowing viewers get a quick compilation of the K-Drama’s story line. We’re introduced to all the important Taste of Love characters (which I’ll get to in a minute)… and then we meet Claire. Claire is a college student working at her father’s sandwich shop. It takes less than sixty seconds for hardcore fans to relate to her. 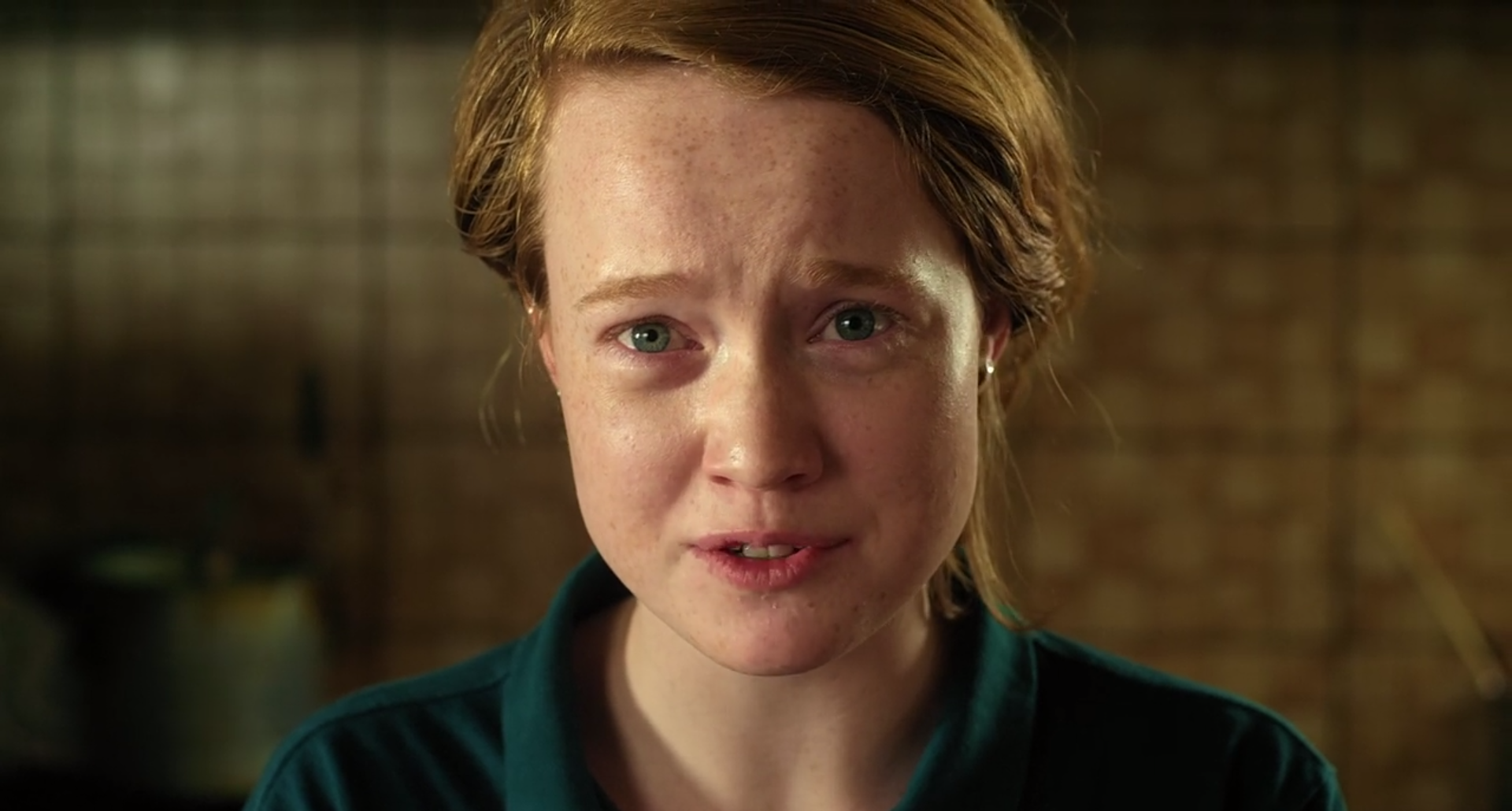 Claire: “Taste of Love is the most popular show on Korean television.” Customer: “No body freakin’ cares! Just make the sandwich!”

Don’t we all have moments where we’re gushing about our all-time favorite fandom, and the person we’re talking to just doesn’t understand?

Dramaworld might not be the Korean Drama I was searching for, but I think it may be an excellent introduction to this genre. Before I continue, let me clarify: I have no intimate knowledge of Korean culture, or any other Asian culture. I was born and raised on the East Coast of the US, so Korean Dramas are a completely new world to me. (And I’m excited to learn more about them!) Perhaps in a few months, when I understand more about Korean culture, customs, and media, I’ll change my mind about Dramaworld. But for now, I think this show is fun and quirky enough to bring it to the attention of Fandom Following readers. To readers who have intimate knowledge about this genre, or Dramaworld, please share your insights and observations regarding this show! I’d love to learn from you.

Now that we’re all on the same page…

As the title of this section suggests, Howell’s observations on K-Drama tropes must have some truth to them, because I spoted a number of them in the Dramaworld series. The creators’ (Chris Martin and Josh Billig) intentions are to purposefully play-up or play-off-of common K-Drama tropes, so here are a few tropes I noticed right off the bat.

The male lead is characterized as arrogant. 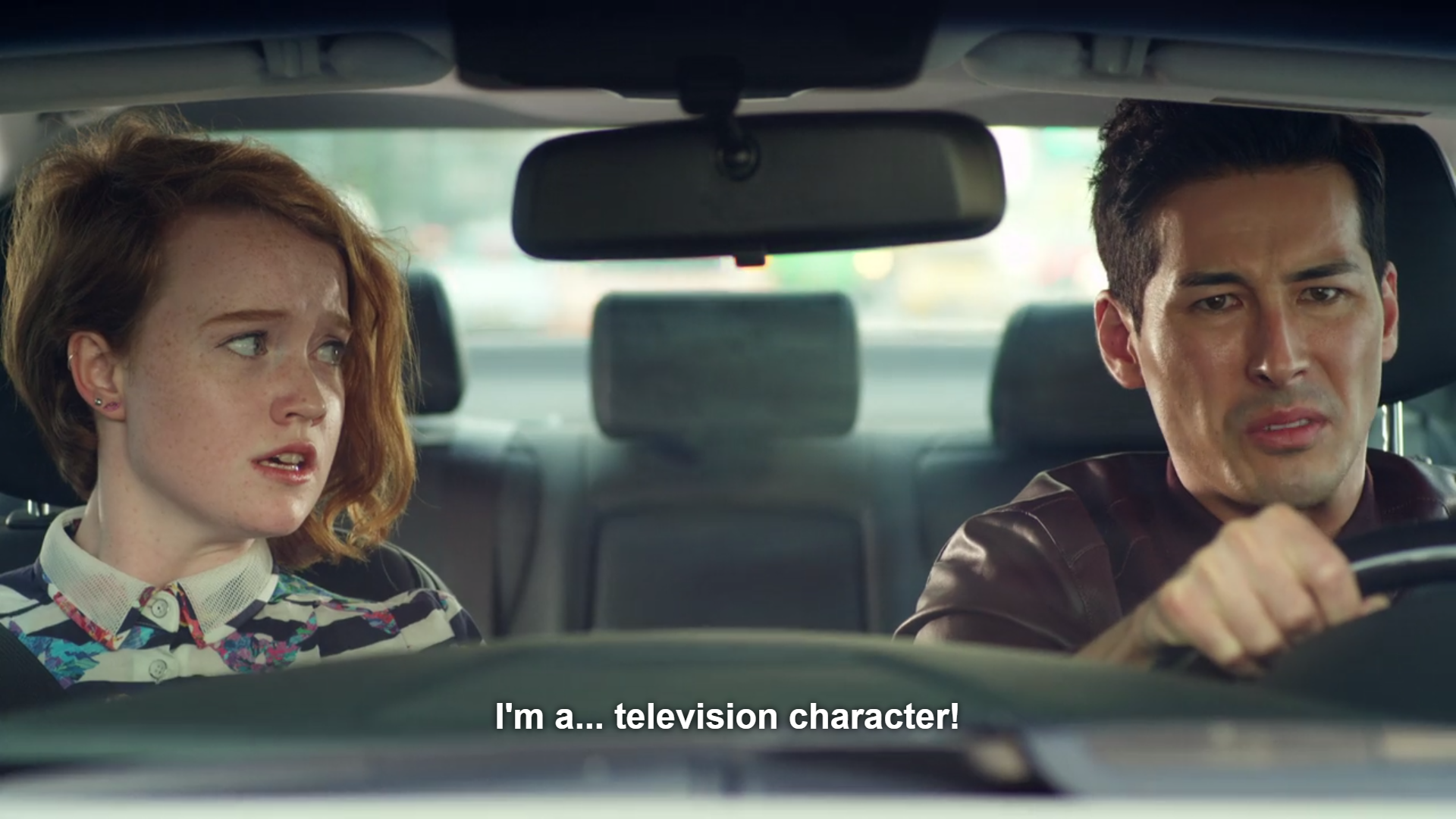 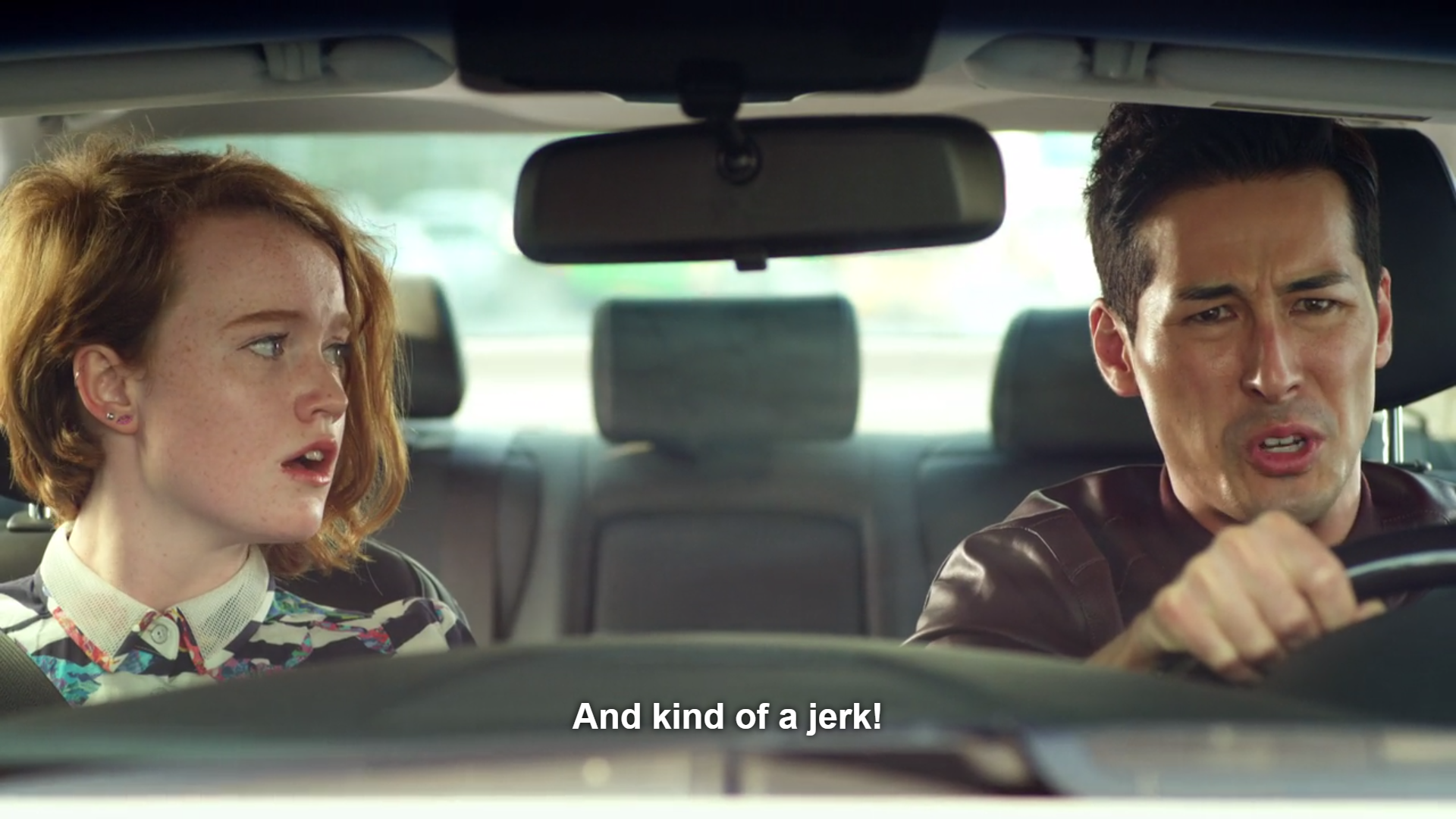 This is the legitimate dialogue. No false subtitles were added to these pictures.

Makeovers, no matter how small, are a thing. 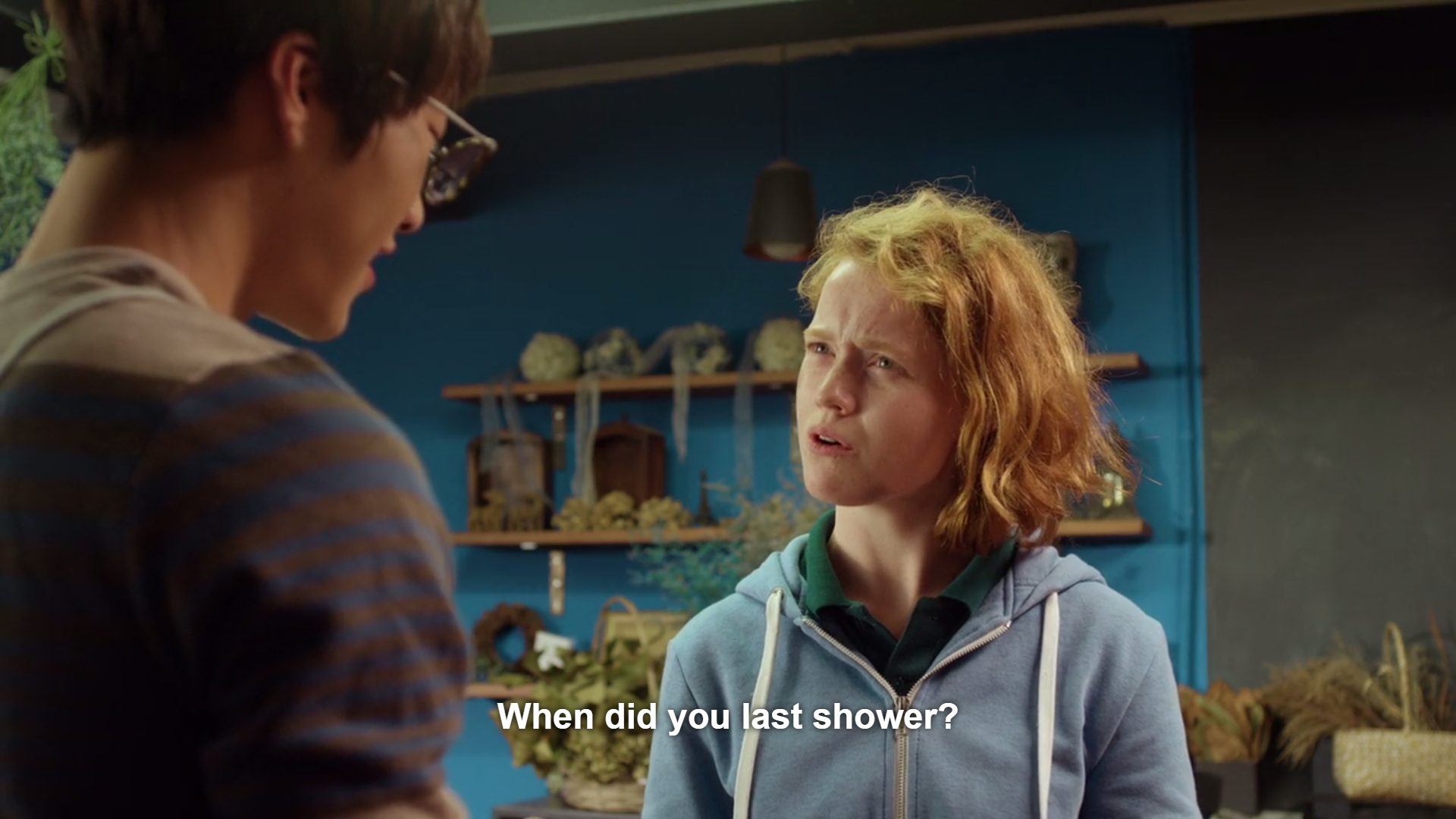 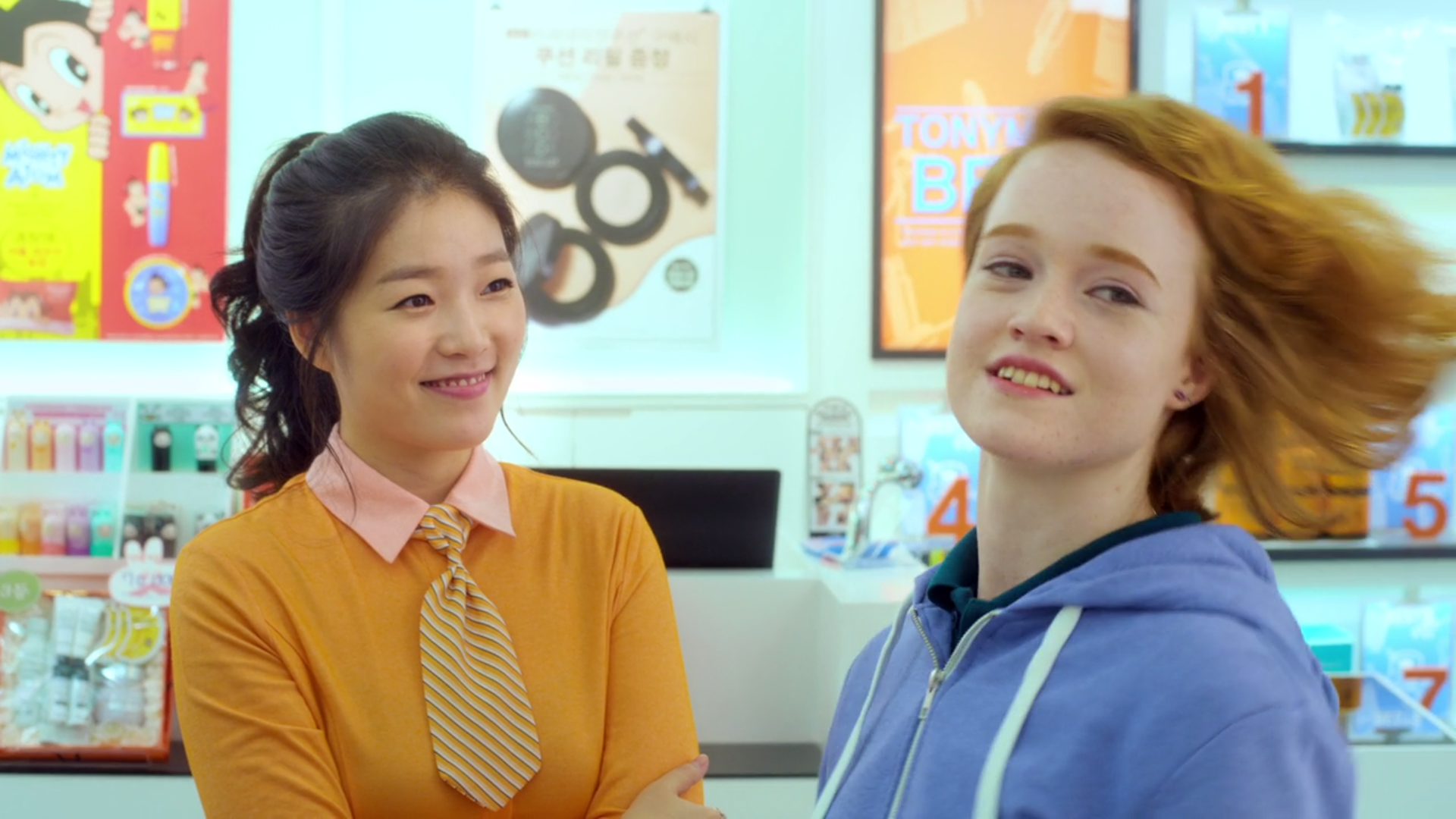 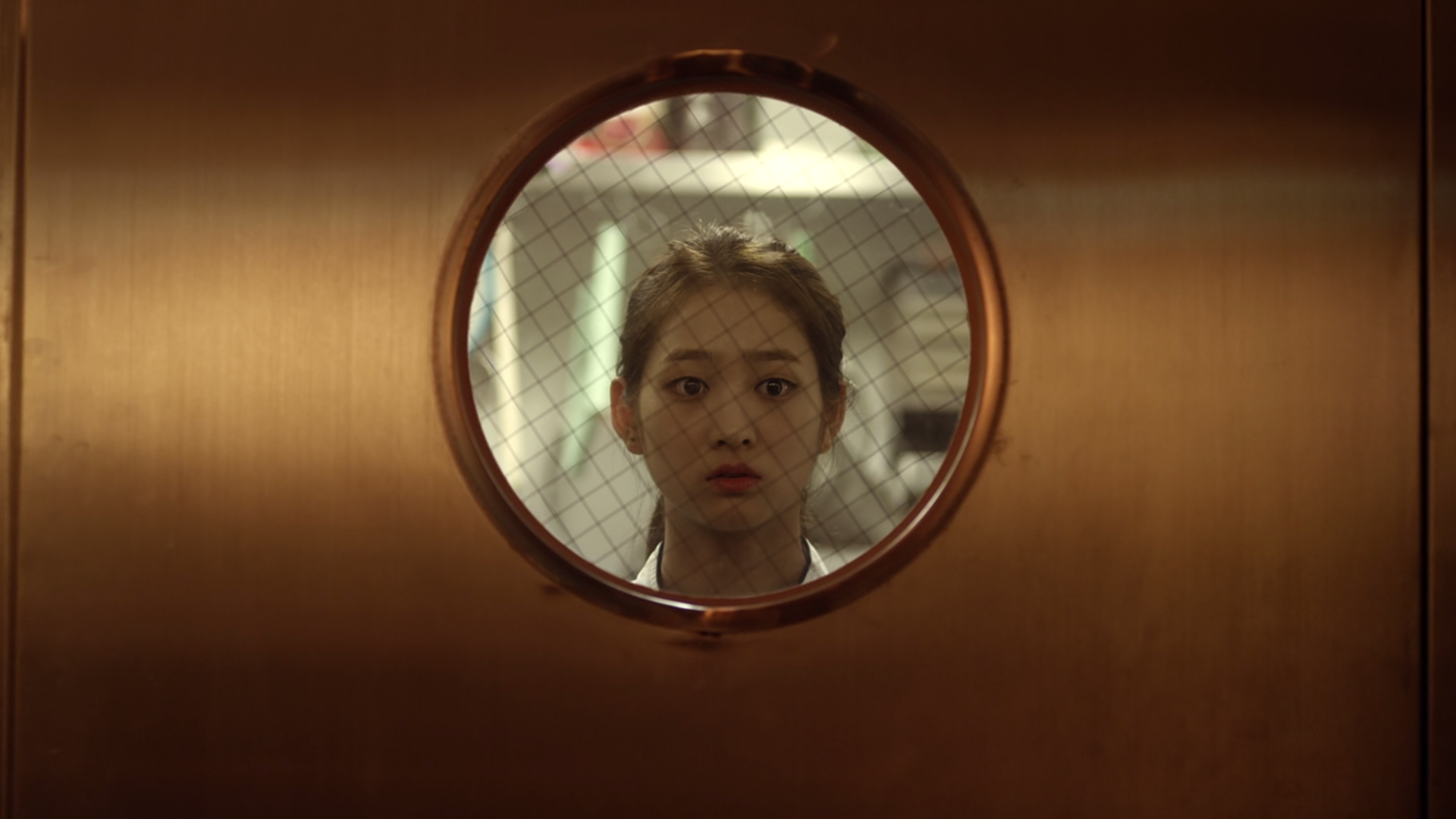 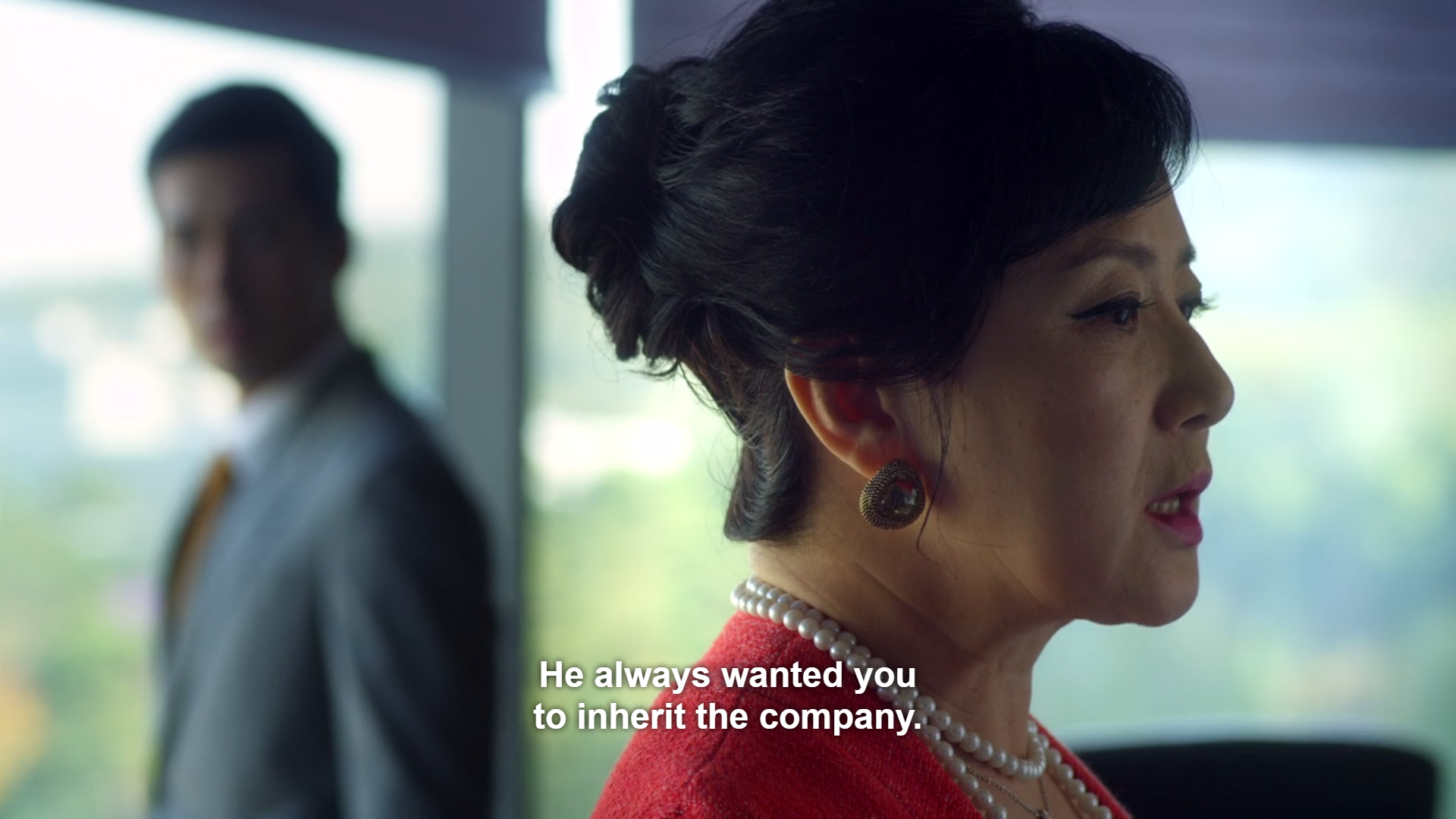 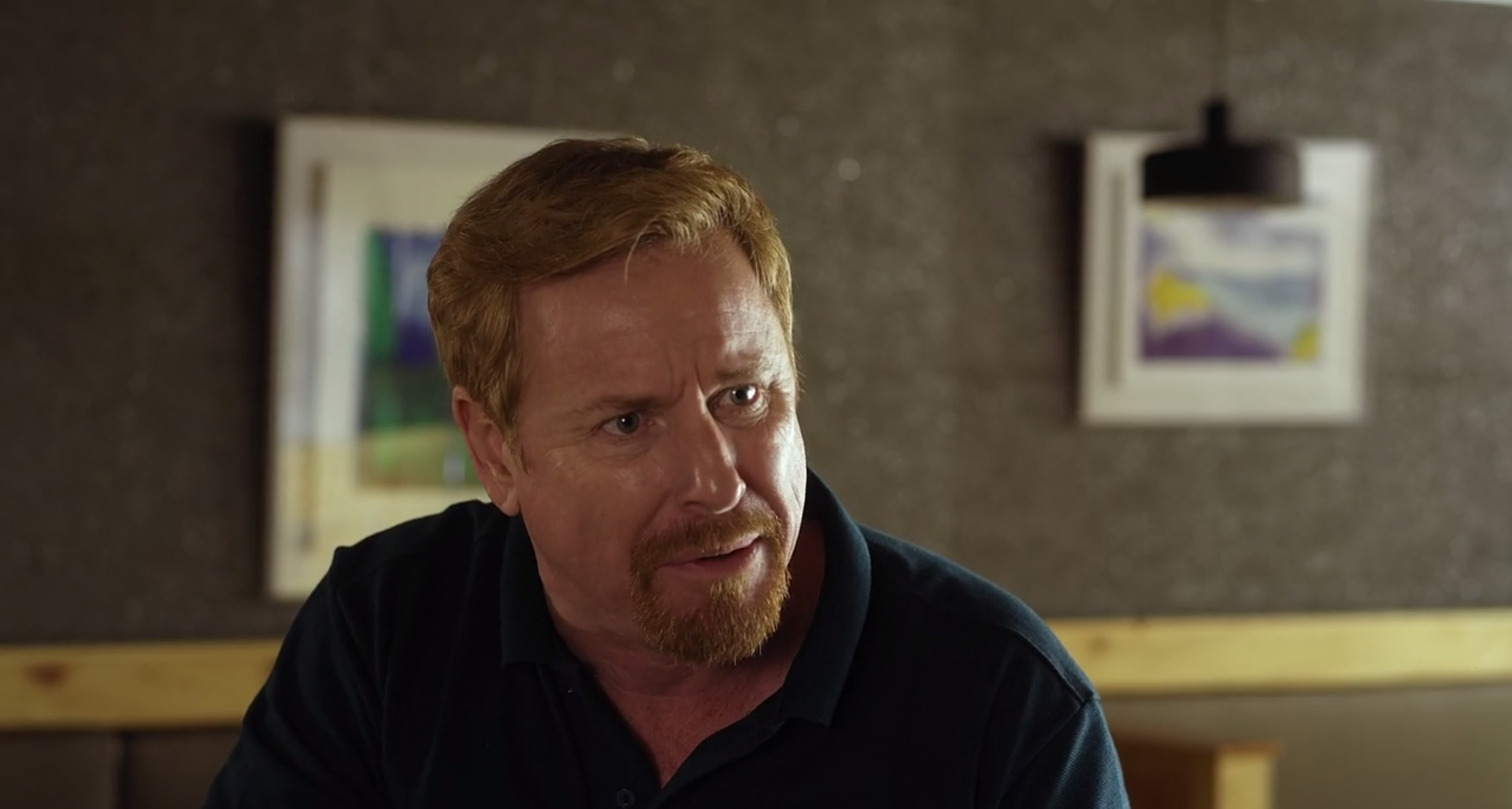 If you haven’t noticed by now, Dramaworld is a bit of a parody. Although, I hate using the word parody because it tends to carry a negative connotation. At no point did I think Martin and Billig were harshly poking fun at K-Dramas. I feel that their stylistic approach comes from a place of love for the genre. I say this because…

The Laws of K-Drama

Martin and Billig find other not-so-subtle ways to introduce the audience to other characteristics of K-Drama television. By introducing a book of tricks, plots, and tropes for K-Dramas, the creators of Dramaworld directly outline what they believe to be the fundamental qualities of a Korean Drama. (Again, due to my limited exposure to Korean culture, I cannot verify the accuracy of this list; however, I can highly suggest that this list is what Martin and Billig most likely believe to be true of K-Drama television.) 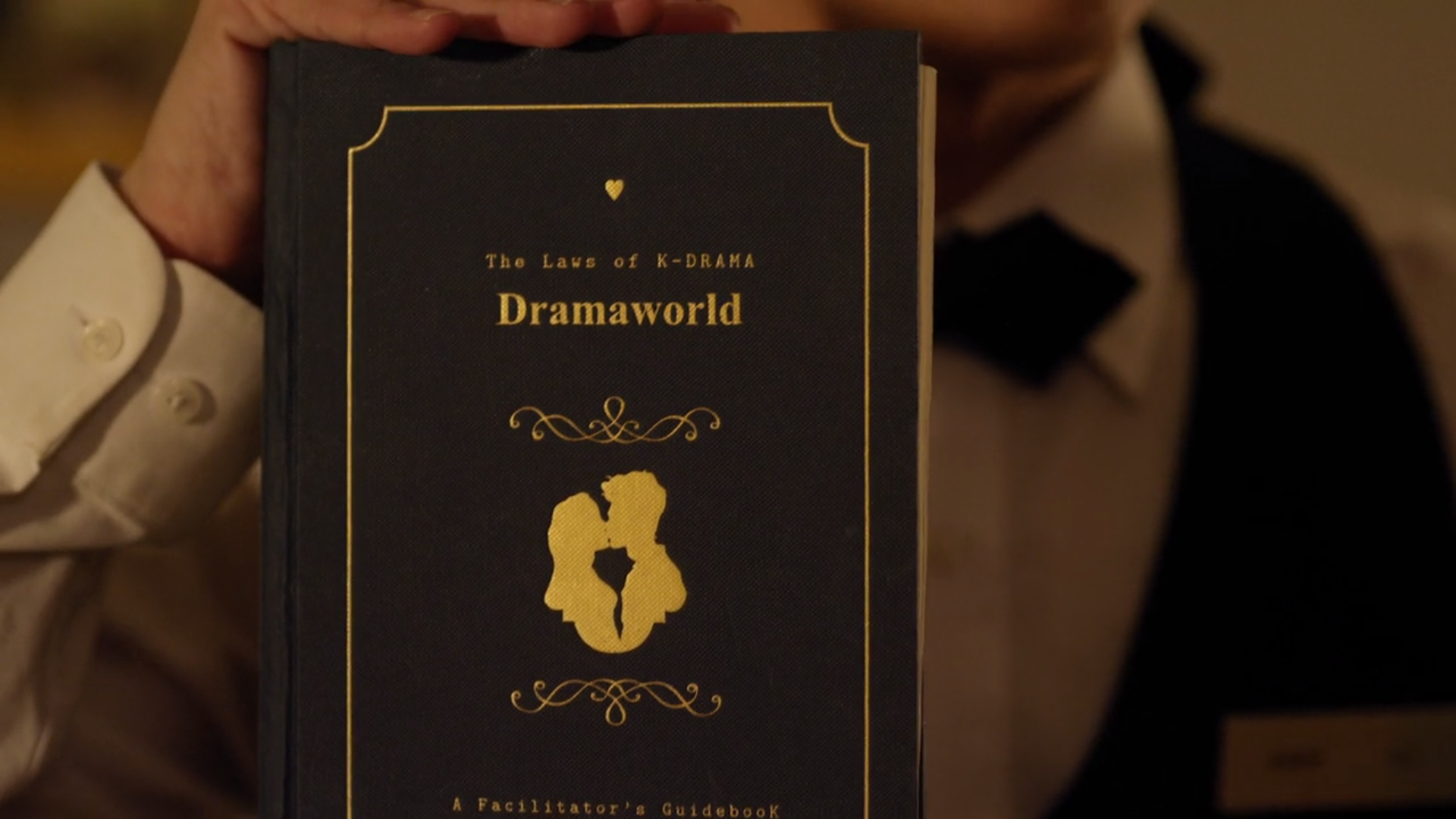 Seth reads to Claire The Laws of K-Drama in Episode 2. (Note: Facilitators, like Seth, are magically chosen and brought from the Real World to Dramaworld.)

The Laws of K-Drama include other chapters like Justice, Flashbacks, and Dream Manipulation. These topics are introduced throughout the series. I can’t say how these plot devices exactly correlate to K-Dramas, but these are definitely apparent in most dramas, internationally, and seem self-explanatory.

Fun Moments That No Other Show Can Pull Off

Due to the show’s unique qualities, Dramaworld has enough artistic freedom to pull of some strange and wacky comedic moments. 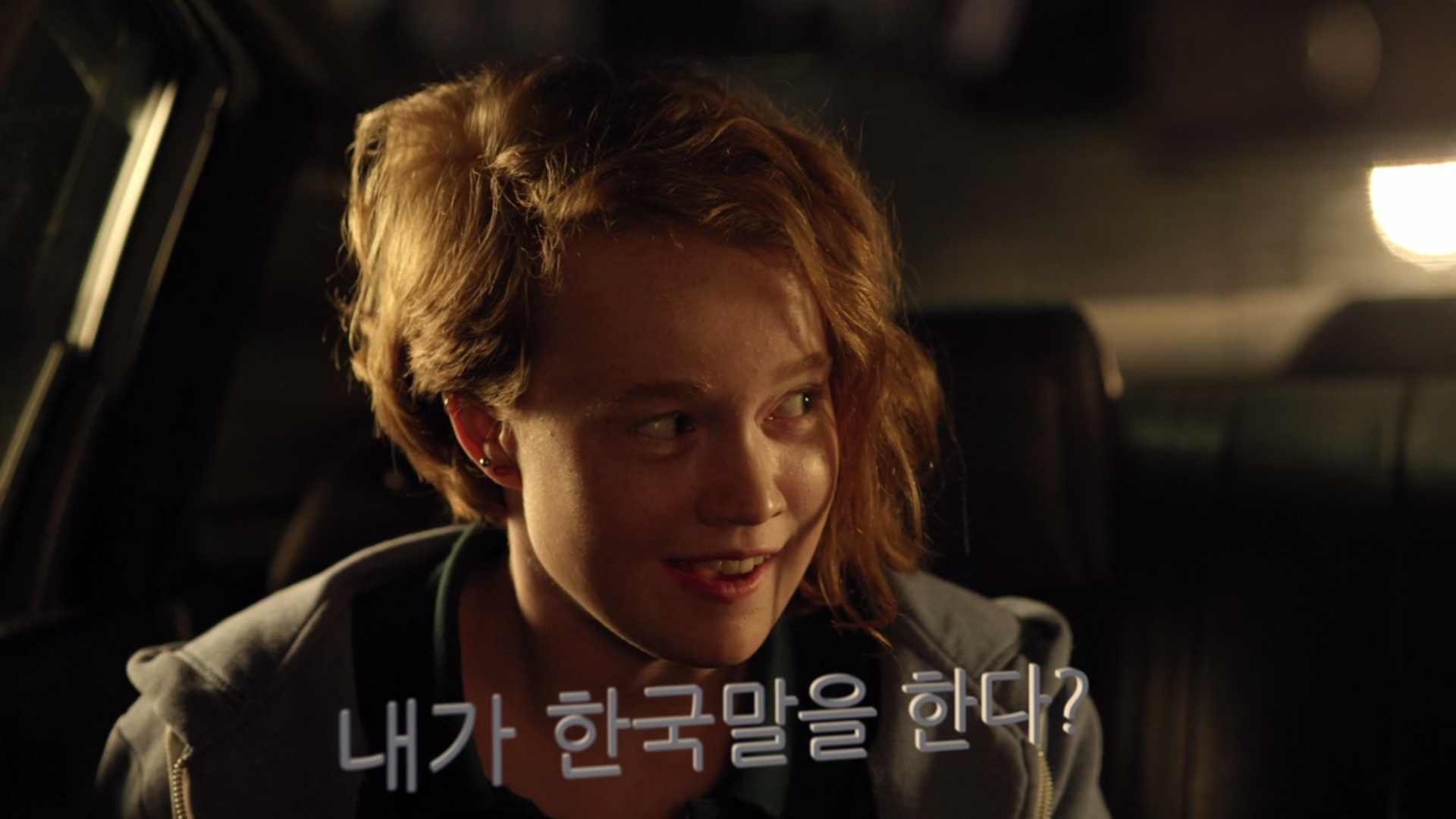 There is a simple explanation of why characters can easily speak English or Korean, or switch between languages, and can all understand each other. “Everything is subtitled.” Therefore, Claire and Seth are free to speak English and the Taste of Love characters are free to speak Korean, without there being any language barrier. This allows for a humorous moment when Claire realizes she’s speaking Korean… but not really.

Leading men must always catch falling women. Seth describes this trait as a magnetic pull leading male characters cannot ignore. To viewers’ delight, Claire tests this theory by pretending to faint. Of course, some man seems to pop out of nowhere to catch her. BUT this theory truly becomes hilarious when Joon Park allows a random drunk girl to climb on his back in the middle of a scene. He doesn’t even glance at her!!! Not once!!!

The silliness continues as the season progresses. Due to the Taste of Love plot being askew, all of Dramaworld is off. Thus, other dramas try to cross over into Taste of Love. These unexpected moments tend to contrast well with the events happening in the overall plot. Joon sees dead Taste of Love characters in the reflection of his restaurant’s glass walls. During Ga In’s funeral, a stranger tries to hand Claire a brief case full of highly classified missile codes and she is NOT having it. And how can I not mention the K-Pop sequence at the beginning of episode 8!?! 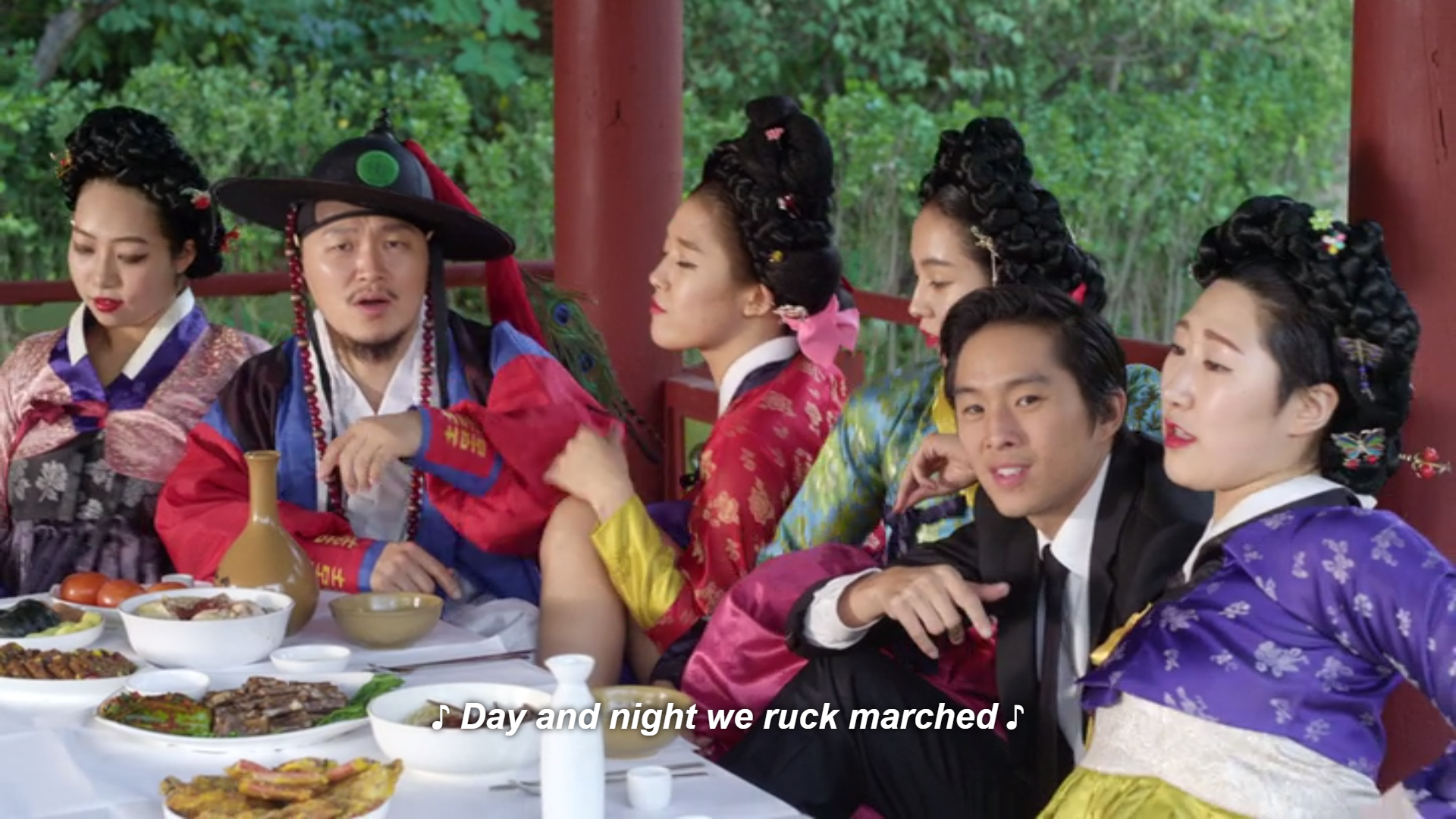 Of course, there are a number of discrepancies. No show is perfect.

I’d really like to know, where did Seth find this book of K-Drama laws? If it’s a guide that magically appears when facilitators are brought into Dramaworld, why didn’t Claire receive her own copy?

In regards to the laws of Dramaworld, why will the world cease to exist if true love’s kiss is not achieved? Why must character’s have their minds wiped at the end of a drama? And why is Joon and Seo-yeon’s love story destined to repeat over and over?

There are multiple flaws that I can nit-pick, but the purpose of this article is to introduce the Dramaworld series to an audience who might not give it a glance otherwise, AND to say hi to all the fans who are already in love with this series. I’d like to hear what other people think of Dramaworld. Is it truly as fun and quirky as I think it is, or am I delusional? I look forward to reading your comments!

In this article:Dramaworld, Korean dramas, Netflix