It’s been almost four years since most of us watched the pilot for this show and we are still having whole episodes fabricated around the “I didn’t tell you because…” trope, which is usually passable, but, this week, it really took a toll on the storyline. Even besides a few plot holes. Thus, in “The Wrath of Savitar”, Team Flash struggles because Wally is having visions while Caitlin and Julian’s will-they-won’t-they relationship persists.

We pick up on our three speedsters training around Central City in their ongoing quest to save Iris’s life. This time, Wally succeeds on being technically fast enough to stop the event from happening, but he has another vision of Savitar in the distance. Apparently, Wally was being extra motivated because, according to Caitlin, “[he] doesn’t want to get beat by his girlfriend” – Happy International Women’s Day to all you amazing women out there and a big shoutout to to Jesse Wells who has to deal with bullshit like this! 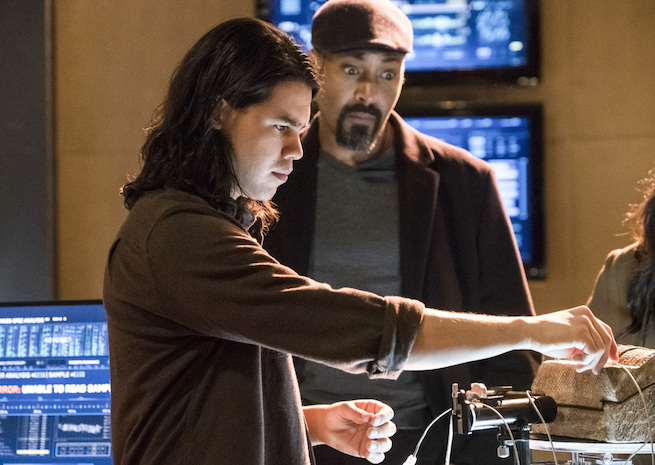 Julian comes back from London and has an awkward nonversation with Caitlin right before Barry and Iris take to stage to announce their engagement. Joe is acting weird and while he claims he is happy for Iris and Barry, he pulls the latter on the side to asks him why he didn’t ask for permission – a fact rendered a plot hole given last episode when Barry told Iris that Joe had “held onto the ring until [that night]”.

Cisco tells them about a fire during which only Barry and Wally could go to the rescue because Jesse was “too busy with the ring”. During the superheroing, Wally has another vision of Savitar that starts physically attacking him. Barry sees it, so he can’t keep it a secret anymore that he has been having these occurrences for the past week. Furious, Barry gives Wally a big timeout for not disclosing potentially life threatening information to the team.

Barry decides to use Julian’s connection with Savitar to once again to speak with him and, despite his denials for being abused again, it only takes a brief moment and/or kiss with Caitlin for Julian to change his mind. During the chat with Savitar, some information is rightfully given: HR lived through this ordeal, Team Flash/Barry was directly responsible for the villain becoming who he is, but that it created itself not very far from that point in time.

The Team realizes they should ask for more info from one of the villain’s acolytes and, just look at that!, one of them was having a “Savitar Will Return” cult meeting right at that very exact moment. Barry crashes the party and finds the box that contained the Philosopher’s Stone and Savitar which was thrown into the Speed Force back in December. 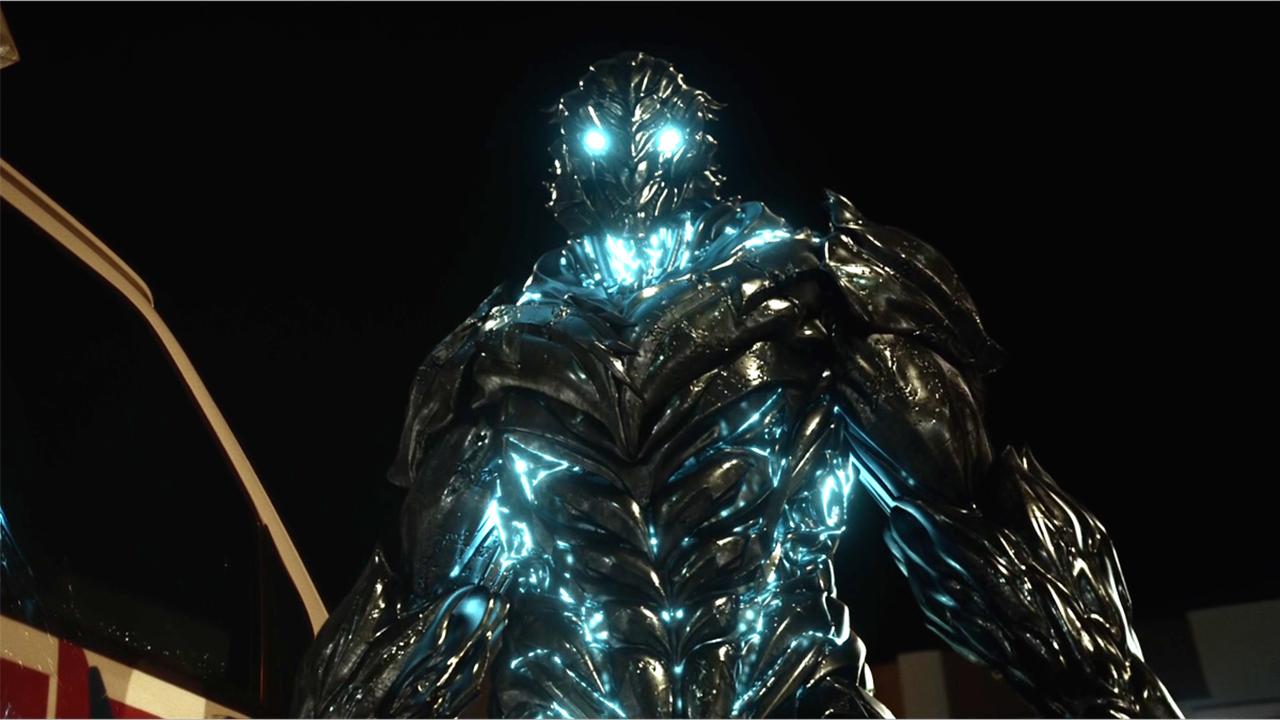 Wally is training with HR, but he is not going as fast as he was at the beginning of the episode. HR realizes that something, most likely fear, is holding Wally back so they decide to ask Cisco to vibe them into the future so Wally can have a better look at Iris’s death and see what he needs to do to stop it. When they’re there, they witness the murder again, but Wally notices that Iris was not wearing the engagement/wedding ring. As he’s brought back, he confronts Barry about it and Iris receives the news that, apart from love, the engagement was also about changing the future, which doesn’t sit that well with him.

Julian gets worried about him being the betrayer that was foretold by Savitar a while back, but Caitlin reveals that she has been it for a while as she held onto a piece of the Philosopher’s Stone after Savitar was thrown into the Speed Force because she though it could help take her powers away. Caitlin, however, does not get a big timeout for not disclosing potentially life threatening information to the team. Julian, once again under protest and initial refusal, goes under Savitar’s mantle so Cisco can track him down, but the position they get from the villain is “the whole of Central City”.

Jesse finds Wally at home and they have a very sweet moment, interrupted by him having a vision of his mother that starts out well, but as Francine is revealed to actually be a manipulative vision of Savitar, Wally gets in distress mode and goes to end this himself, deciding not to tell his speedster friend Barry Allen or his speedster girlfriend Jesse Quick (right there in the room) with him. Wally does not get his second big timeout for not disclosing potentially life threatening information to the team, but he is punished by the narrative by the end of the episode. 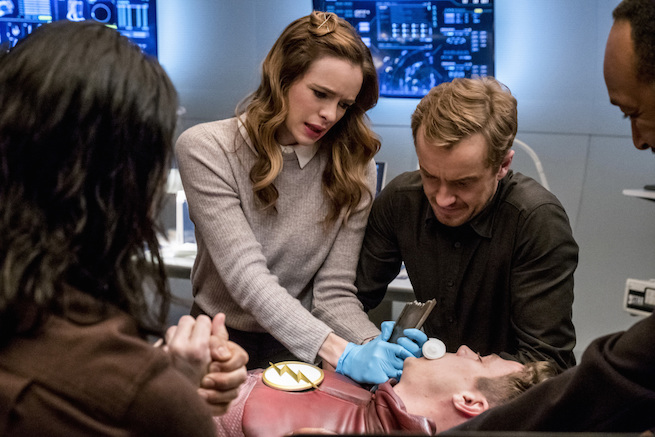 Team Flash realizes that Savitar had been imprisoned within the Speed Force and that, by throwing the Philosopher’s Stone in it, they gave him means to escape, but he hadn’t already because of that one piece of the stone Caitlin had kept to herself. Sadly, Wally hadn’t gotten the memo when he decided to open the Speed Force in the middle of the street (didn’t Barry need to use the STAR Labs facilities besides getting help from Jay Garrick?) by himself, throwing the piece at it.

The thing is, Wally ends up getting painfully sucked into it while Savitar escapes after manipulating Wally into doing what he wanted and pulling some bullshit story from his blueish-silver ass about someone having to take his place in the prison ala The Myth of Atlas Holding the Sky (thank you Percy Jackson books for allowing me to understand the reference). So now he’s on the loose, fighting Barry, with great visuals, but the power imbalance set from early on in the season, when the Flash got his ass handed to him, is not quite there – Barry even got Savitar on a headlock.

However, Savitar does manage to use one of his spikey finger to stab Barry in the shoulder, but the Flash uses his powers to sever the thing from Savitar’s hand and the villain goes away with promises of eternal hurt as he WILL kill Iris West and Barry will never get over it.

Barry goes back to STAR Labs as the Team looks after him, pulling the finger out to become a potentially helpful object. On a final note, they all feel bad for Wally not being there with them and Barry sees that Iris is not wearing her ring.

So, I had a few issues with this episode. Starting off with the casual toxic masculinity in Wally not wanting to get beaten by his girlfriend to the plot hole involving Joe being suddenly shook by the proposal allied with his personal offence taken as Barry had not asked for permission, and finally several plot points that only existed because the team decided to keep secrets from each other.

The issue here is not only that this is a very old and overused trope that TV absolutely adores, but also that just a few episodes ago the team made a point not to keep secrets/avoid disclosing information because they saw it as harmful. It’s absolutely horrible considering how happy I was with the writing decision to have Barry tell everyone about his visit to the future and how Joe, upon being told about this a few episodes later, also spoke on this particular issue. It’s harmful, it’s contrived, it’s fabricated drama, and it makes for really poor episodes. 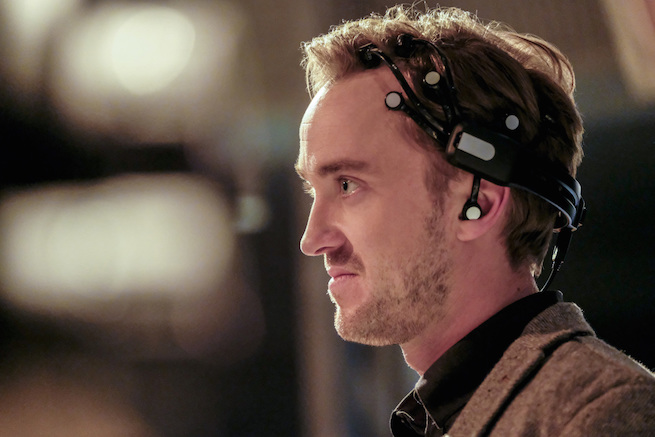 Having said that, the overall quality of the episode still somewhat held. There are a bunch of believable theories out there on who Savitar is and, for a little while, the episode made me think that Wally was actually becoming the villain because of the mistreatment he got from the team/Barry and because it could work around the time travel component of the story. Savitar did make a point that it had been Team Flash’s fault that he was prompted to become who he is, so it made sense. However, the classic theories regarding “Barry From The Future” and Eddie Thawne are still on the table just as they existed since the Reverse Flash and Zoom.

The episode also gave more on Julian and Caitlin and I’m still not feeling it. I’d say it’s because this is probably my fourth couple on this show – it goes Barry/Iris, Wally/Jesse, Cisco/Gypsy, and then Julian/Caitlin. I don’t know why exactly, but they’re not quite doing it so far, not hitting the emotional strings.

It’s also very much worth mentioning how easy it was, twice, for Julian to go from “I don’t want to be a victim of Savitar’s abuse again” to “Plug me in” just after Caitlin talked to him. It was somewhat okay the first time, but the second one was pathetic. Julian at this point has become an object and it is quite uncomfortable. I like that they still have a mental connection after Savitar used him for his wrong doing and while I don’t think this qualifies exactly as Grodd speaking through someone to avoid CGI, it still feels a bit cheap on the end. Thankfully, Tobin Bell is there to lend his remarkable voice from Saw’s Jisgaw to the Savitar’s appearances.