In Tuesday’s “Paradox” episode of The Flash, Barry Allen returns to a timeline that is both minorly and significantly changed from the one he left to create the Flashpoint for. Cisco is in mourning, Joe and Iris do not talk, and Barry has apparently been sharing an office with a stranger for a year. As Barry tries to fix everything, he finally learns that some things really just need to play out.

This episode was frustrating in an obnoxious, but entirely understandable way. Because, since the audience spends most of its time watching things from Barry’s point-of-view, we only know what Barry knows, when he gets to know it. So if Barry comes into a new timeline with minor changes that he doesn’t know about, and everyone treats him like he should know but he doesn’t, how are we, the audience, supposed to feel anything but annoyed?

When Barry comes into this new timeline, Joe and Iris are fighting because Joe didn’t tell his daughter about her mother possibly still being alive, and Cisco is mad that Barry didn’t go back and change the timeline when Dante died. I didn’t so much mind that Joe and Iris were fighting; it was an issue within the fandom last year that Joe West had lied to Iris about so much, but she never seemed to really hold it against him. So seeing them have that tension was fine.

However, what were we supposed to do with Cisco’s anger at Barry once it’s revealed that Barry technically wasn’t present for that anyway? It doesn’t stop the fact that this Dante is dead, and Barry apparently caused that death by changing the timeline.

I was not happy with the first half of this episode, because everyone was side-eying Barry for all of the things that he was supposed to know, but didn’t. And it’s not that I did not understand why the characters felt that way, but I could not fully sympathize with them because I didn’t even know what was wrong. It’s one thing to hold back information for a big reveal, but it’s another thing to leave your audience feeling frustrated by minor info that you could have filled in with a flashback or something.

Even if Barry had tried to go back and save Dante, is it within the scope of Barry’s powers for him to be able to go back to a point in time that he was technically not present for? Like, if the Barry we know didn’t live that moment of at least being aware that Dante was dead in the timeline where Dante dies, how can he know when to go back to? We’re not even sure when exactly Dante died, or how far post-Zoom’s defeat this timeline is.

I know I’m supposed to suspend my belief here, but that was just ridiculous. (And I could go on about continuity issues in this show, but I ramble enough already.)

Next, we are introduced to Julian Albert, Barry’s new office-mate, who has apparently been there for a year. I appreciated the Harry Potteresque music upon Julian’s appearance, but I am more curious about the metahuman conference that he apparently went to, and why Barry wasn’t invited. Does the inclusion of Julian mean that the metahuman task force had gotten good funding and more people in the year that we’re not privy to? Did Julian get all of the cases that we had previously seen Barry work? Did the Patty Spivot arc even happen?

Julian seems to be the principal CSI on the cases linked to the newest meta, Dr. Alchemy, but, again, we wouldn’t know what those cases were about if Barry doesn’t. We do however know that Dr. Alchemy has worshipers, and probably did not get hit by the Particle Accelerator. Dr. Alchemy is also the one who woke up Edward Clariss in the previous episode, and gave Clariss his speedster powers in this one.

While I didn’t appreciate that Dr. Alchemy ruined my Mirror Master theory, I do like that he gives us another option for making metas. Up until this season, everyone on Earths 1 and 2 were given their powers by a Particle Accelerator explosion, or a Dark Matter leak from said Particle Accelerator. We now know that Flashpoint Wally got his powers from lightning and a nitro formula, and we’re just never told how Edward Clariss’s Flashpoint self got his powers. So if Dr. Alchemy got his power from another source, and is now making metas, we are bound to eventually get new metas of the non-Central City variety. 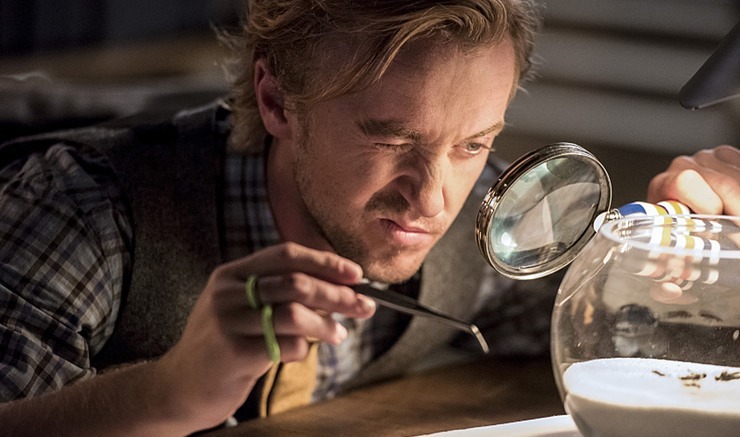 Back to Clariss, though—I am sad to see The Rival become yet another Meta of the Week who dies. I personally like the Meta of the Week formula, but I also like being able to see them again later on in the season. What is the point of showing us an interesting, but not terribly frightening, villain if they die before we can really get into them? I understand that people are tired of the major villains being speedsters, but The Rival wasn’t so dangerous that he couldn’t have been kept around for one or two more appearances.

If you think about, it gives metas a bad rep if the human villains get to live and return, but the meta ones don’t. When was the last time you saw any of the metas that Captain Cold saved from being illegally extradited to Lian Yu in season 1? Dr. Light is in the wind, King Shark is with ARGUS, and Black Siren’s presence in this timeline is currently unknown. So who’s left in Central City, besides the very human Captain Cold and Heat Wave? We need to let some of these metas live.

In any case, you would think that having to let his mother die for a second time would finally cure Barry of changing timelines, but he literally has to be yanked from the speed force by Jay Garrick to finally get it. It is at this point that we see our second Warner Bros Easter Egg of the night with Dawson’s Creek playing on the TV screen of a diner in 1998, while Dawson’s dad schools Barry about messing up timelines.

Eventually Barry gets back to the new timeline and finally explains why he had been acting so  strange due to the being from another timeline. I wish that this had not taken so long, so that I could have been spared the frustration mentioned at the beginning of this post, but it also kind of made me appreciate the Iris of this new timeline.

Like I said before, parts of the fandom had taken issue with the fact that Iris had been lied to by her father and best friend, but never really got to be mad about it. I personally thought that she should have flipped all of the tables in CCPD and STAR Labs when she found out that Barry was the Flash (although this had more to do with Foggy Nelson’s dragging Matt Murdock for filth over the same thing on Daredevil earlier that spring). So when Iris gave Barry that ultimatum to either tell her the truth or their romantic relationship would not go forward, I really appreciated the fact that Iris wasn’t as passive in this timeline. Because I’m all for Iris standing up for her best friend, and being his cheerleader, but Barry doesn’t get to lie to her and not see any consequences. They can’t have a real relationship if Barry can’t talk things through with Iris. That was a problem with Linda, and a major issue with Patty, but it makes me happy to see that Iris wasn’t going to let that slide.

And I’m not saying that Iris is generally passive, but they were barely letting her express herself last season.

The episode wrapped up with a Cisco coming around to help Barry out in a fight, which was awesome because Barry rarely gets to fight with his team. I was worried that we would have to deal with a moody Cisco all season, but it was nice to see him attempt. I miss Dante too, but killing him off screen and erasing their reconciliation really ruined the effect.

Honestly, the only person who wasn’t affected by the Flashpoint was Wally. Caitlin’s Killer Frost powers are coming in, but, because we have no context for when it started, it doesn’t really do much for us right now. We’ll probably come back to it, though. Wally, on the other hand, is just living a regular life as a college student. Although, he does have a much better relationship with Barry.

I personally have always thought that Wally could do with a friend, and the reintroduction of Jefferson Jackson to The Flash could go a long way to that end. Given that they’re both young, black men caught up in the superhero life, being about the same age, raised by their mothers, and interested in cars, there’s reason enough to believe that they could get along.  It’s a pipe dream on my end, but it’s something that I believe could be great if it happened.

Next week, though, Jesse comes back to show off her powers, and I’m wondering how that will go with respect to Wally’s having been the Flashpoint’s Flash. In his current state, Wally has no reason to be jealous, but who’s to say that Barry won’t slip up and tell Wally about the possibility of him being a speedster. What stops Dr. Alchemy from stirring that pot?

All in all, this episode of The Flash was not terrible, but it left me with too many questions. Like, if being in another timeline for too long erases Barry’s memories from the previous timeline, why wouldn’t it also give him new memories from the current one to replace them? Is the Arrowverse only affected by the Flashpoint or other timeline changes when it’s visited on The Flash, or do they actually show up in Arrow as well? Was Sarah Diggle’s becoming John Diggle Jr. the only Arrowverse change? And who was that watching The Flash fight The Rival? They weren’t wearing a mask, so we wouldn’t even know if it was Dr. Alchemy.

When you count it all up, this episode just leaves us with too many questions. And, because The Flash justifies continuity discrepancies with the different timelines, you can’t really trust that it will even bother to answer them. Still, I’ll be here next week, and so will you, probably. However, if you have an answer to any of my questions, you can let me know in the comments.

Or, you know, if you just want to talk. “True Colors” starts with Katee Sackhoff overstaying her welcome as Amunet being guided through warden Wolfe’s private metahuman prison: how, when, and with whose...