On this week’s episode of The Flash, Caitlin goes to see her apparently estranged mother. Cisco decides that he doesn’t want to be deceived by yet another Harrison Wells, and takes action. Julian Albert can’t help but cross fandoms, and there was an actual monster. Sort of.

“Monster” was the filler-iest filler that ever filled a 24-episode season order to date, but it did have it’s good points. Its reveals were predictable, and even the thing that should have made the episode memorable was a bit of a let down. However, some of its unadvertised moments were surprisingly great.

Reminder: This post is filled with spoilers for episode 5 of The Flash, “Monster”, from this point forward.

The episode actually starts off with a portion of the show’s fandom’s head canon: Barry and Cisco living together. It’s a small scene where Barry shows his gratitude to Cisco by making breakfast for him. It’s very funny and friendly—until you remember that Cisco pretty much forgot that he should still be a little wary of Barry for essentially killing his brother.

It’s almost like Cisco’s not affected by Dante’s death any more. Hell, if he hadn’t brought it up with Caitlin, later in the episode, the audience would have entirely forgotten about Dante at this point. The show definitely has.

The episode then moves on to Caitlin going to visit her mother to better understand her powers, and it’s way more dramatic than it really needed to be. I don’t know if anyone notices, but I low key support the development of Caitlin Snow as a character. We know that she has terrible luck with love interests, and apparently has a nice apartment, but other than that we don’t know much about Caitlin. So this episode should have been a good one for her. However, I really feel like Caitlin’s storyline was entirely unnecessary. 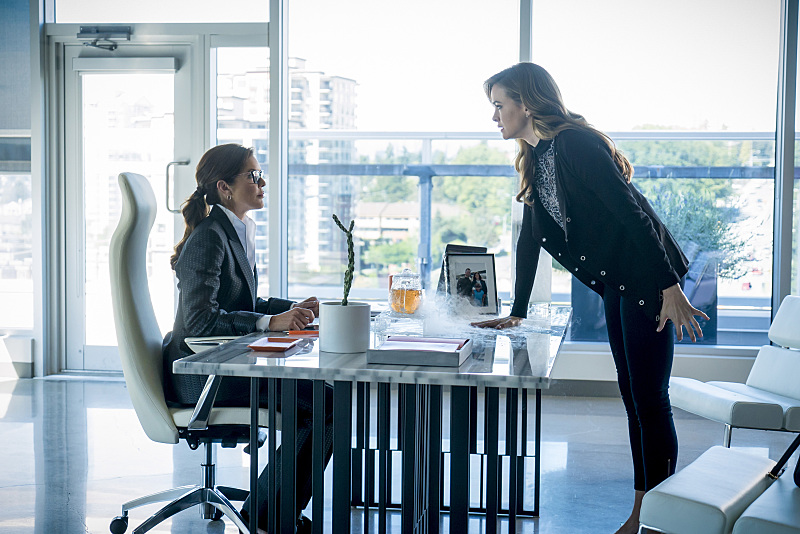 Caitlin’s metahuman powers have finally begun to manifest, courtesy of Barry since they had been relatively dormant in the original timeline. Despite working with metahumans, helping them develop their powers, and essentially helping to create them, Caitlin decides that her estranged scientist mother, whose only only connection to this is blood and a cryofreeze project, would be the best person to help her. How does that make sense? Why not just talk to Cisco and Harry so that they could figure something out to help negate her powers, since that’s apparently what she wanted?

Instead we get a weirdly aggressive Caitlin icing up her understandably busy mother’s desk for attention. We get a frost-bitten assistant, who wanted so bad to get out from under Caitlin’s mom that he thinks it’s a good idea to try and force Caitlin to stay. Admittedly, he somewhat deserved it, but the jump to Killer Frost was so quick that it seems like it really wouldn’t take much for Caitlin to go bad.

So, has Caitlin been hiding her anger issues this whole time? Couldn’t this have been seeded just a little bit better? And don’t think that Nigel’s (the lab assistant) appearance didn’t have a portion of the fandom flashing back to Cailtin’s handling of Jax last season. Especially with how Caitlin’s mom is apparently going to “deal with it”. Nigel might end up in jail on exaggerated assault charges, missing a hand.

Honestly though, the craziest thing about Caitlin’s story for this episode was how she had gone and come back, and it had almost no effect on the rest of the episode. She’s supposed to be a vital part of team Flash, and yet they have regularly made it without her.

That’s probably going to be what pushes her to become Killer Frost.

Julian Albert had a significant role this episode, or rather, a significant story. He begins with bringing Captain Singh’s attention to nine separate infractions of Barry Allen’s, hoping for—what I’m assuming is—either Barry’s termination or some kind of disciplinary action. However, when Barry only gets a verbal warning, Julian calls him the “golden boy of CCPD”. It’s like Singh said, the boy does good work.

As the episode progresses, we gain a better understanding of why Julian chose to study metahumans. At first, his motivations seemed to mirror Patty Spivot’s, in that he thought that most metas were wasting their powers by becoming criminals, which is what happens when we only ever seem to see bad metas. However, we are also made to understand that Julian is admittedly jealous of metas because he would have liked to be one himself.

Still, Julian’s best scene the episode comes after the monster reveal. It turns out that said monster was a hologram controlled by a teenaged boy, who had wanted others to feel powerless because he had been bullied at school. I don’t want to knock The Flash’s use of the phrase “it gets better”, whether it has to do with that campaign or not, but that was terrible. They do get a point for adding some variety to Meta of the Week, though.

But back to Julian. His final scene was so Draco Malfoy post-Hogwarts, that one has to wonder if Zack Stenz, who wrote this episode, was just phoning it in. Don’t get me wrong, Tom Felton knocked that scene out of the park, but it’s probably because he played that role for a decade.

I was originally intending to praise this scene because I honestly thought it was good, and it  really was. However, in the midst of writing this, I remembered who wrote the episode, and why it turned out that way it did. Zack Stentz wrote last season’s “The Runaway Dinosaur”, which got rave reviews for its directing, it’s emotional moments with Barry’s mom, and it’s good chunk of WestAllen goodness. However, when you break that episode down, it’s not that good. There are logical discrepancies all over it, but this guy was allowed to come back because everybody loved it on the first watch. Which is not that surprising considering that this is the same guy that wrote the first Thor (only marginally better than the second).

In any case, I can’t go an episode without telling you how cute WestAllen was. This running out on dates thing is getting annoying, but I guess it comes with the territory. Wally made two appearances for the episode, and spoke maybe one line toward the end. Iris also spoke to Joe about dating Cecile, to which he basically told her to let him live.

That was basically it for the West family this episode, but they’ll apparently get all of the shine next week.

I guess this week’s big reveal—because it was neither Caitlin, nor the actual monster—had to be HR’s reason for being on Earth-1. It turns out that the man from Earth-19 is not a scientist at all, but idea guy who was more the face of his version of STAR Labs than the actual person running it. He’s also a writer, but apparently someone had made the HR Wells and HG Wells connection a week ago. So again, a predictable reveal, but hilarious in the revealing.

I personally don’t think that HR is a terrible guy. Ultimately, you need an idea guy to help you invent the things that you never thought of. And a second watch proved that HR really did help Cisco by directing him toward the things that his mind was too busy to pay attention to. Admittedly, you could say that it was all by chance, but I’m okay with being in the minority when I say that I like HR.

The most interesting thing about this new Wells though, is who it was that got him to Earth-1. He says that it was his partner, the guy that turned his ideas into real life, that solved the cryptogram and brought it to HR so that he could have a new life on a new earth. The question is, who was HR’s partner? And was HR’s being exposed as a fake on Earth-19 really so bad that he needed to come to another earth, or did the partner just want him out of the way?

These are things that could make season three a truly interesting watch. I know we’re going to Earth-3 in a few episodes, but let me know when we’re headed to Earth-19 to figure out those secrets. And keep Zack Stentz away from that script. Bring me whoever wrote “Welcome to Earth-2”.

Speaking of Earth-3, does his return to it mean that Barry will finally tell his team about his adventures with Supergirl? Or are we still pretending that that didn’t happen?

So what did you guys think about this episode? Did you like it? Did you hate it? Are you also curious about the goings on of Earth-19? Let me know in the comments.

All images courtesy of the CW/Warner Bros.

In this article:Barry Allen, The Flash