Remember the awful trailer for the film Get the Girl that I reviewed a while back? Remember how I disliked it and wasn’t even trying to watch it in any serious context? Well, I may stand corrected. I just finished watching Get the Girl and I’m…surprised. I’m not entirely sure it’s a pleasant feeling though.

I wasn’t going to watch this movie originally, not after seeing that regrettable trailer. However, a small, welcoming challenge was set by writer/producer Eric England himself, as he asked me to give the movie a chance. And so I did. Now I need to process what I just saw, which of course I would love to do with all of you.

The film opens in medias res, in a tense stalking scene. The protagonist (later named Clarence) provides narration, which is interrupted by a girl about to kill him. Already on board here, considering the trailer that I saw.

Rewind to a bar, where the same “couple” first meet.

Clarence proceeds to wax lyrical with literary examples of love through narration, because that’s the way to base all of your relationship related ventures: off of novels. They’re all dedicated to Alex, our aforementioned homicidal bartender. The one who—of course—doesn’t know that he exists. And no wonder, she seems to be the only bartender for at least 100 people or so in her section alone. That serving life is tough, man. She’s not looking at you, Clarence. She just wants to go home after serving her 100th daiquiri.

Her financial issues and the difficult process of reclaiming her grandmother’s ring arises early, and, of course, within earshot of Clarence. You know, while he’s listening behind a post in the parking garage. Sooo romantic.

Through a short, awkward conversation, we learn that Alex has an “Asshole Ex-Husband”, actually dubbed that on her phone. Girl, I’ve been there. I get it. From here, Clarence walks us through Alex’s story, as she is not the type to leave her personal issues at home.

Of course, Clarence knows that he’s out of Alex’s league. So he enlists the help of the local Sleazeball (who is really named Patrick, but I’m keeping Sleazeball) by getting his attention with money. In fact, that seems to be Clarence’s main tactic in receiving any attention whatsoever, at least so far. Sleazeball is every bit what you’d think- sexist, greedy, generally terrible. He does, however, call out Clarence’s awkwardness for being too rich and impressionable for his own good. That doesn’t stop Clarence. He agrees to a plan to “sweep” Alex off her feet by kidnapping her. Good plan.

Alex isn’t going out without a fight, though. She kicks a few balls in before being captured, which gives me a glimmer of hope for the rest of the production. It’s well done (and a bit surprising), but she’s outnumbered, and gets knocked out. The show must go on, I guess. 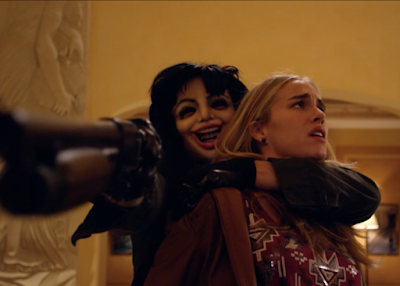 After being transported to Clarence’s house, the plan—holding Alex for ransom—and his affections are both revealed to Alex. Still, the manipulation of her feelings won’t stop her from gaining her freedom, as she escapes not once, but twice within about 10 minutes, maybe less. You better escape, girl. I’m here for Alex not taking this shit.

Things get pretty gruesome from there, and I have to blame it all on Clarence for not just calling the goddamn thing off after the first death. Like, did NOBODY think that Alex wouldn’t fight for her life here? Actually, that might just be it. Sleazeball’s remarks about women consisted of grade A sexism (even though his own girlfriend is involved in this). He probably did not expect Alex to actually defend herself. It takes a few more bodies for him to finally unravel and realize just how bad this plan was, and how he might be next.

Cue the plot twists slowly making their appearances, of which there were quite a few. Clarence goes through a transformation that is…somehow a bit more sickening than his original awkward self. I won’t spoil anything more (unless requested) but let’s just say that Clarence didn’t need Sleazeball’s previous chiding about believing himself the smartest guy in the room.

A few gun fights later and we fast forward to the ending, which was just…not good. Even if I told you what it was, it will leave you guessing, which wasn’t necessarily a good thing. I mostly say this because Alex finds out about the entire scheme, and somehow still accepts Clarence as an admirable person. What. How…?

“So you almost killed me to show me that I’m alive?” – an actual quote by Alex, who forgives her kidnapper

Get the Girl has a bit of an identity crisis, switching between comedy (I did definitely chuckle a few times, to the film’s credit) to gross horror. I found it hard to decipher where the line crossed, but I was definitely not feeling the bed scene with Alex and one of her kidnappers. It’s as cringy as it sounds.

But the film called itself out a few times on its own absurdity, which was easier to swallow. Yet, there’s more negatives than positives here for this film: weird plot, weird dialogue, weird protagonist. The only people with an iota of sense are Alex and Sleazeball’s girlfriend.

I could be cynical and state that Get The Girl just reinforces that I should never fully trust rich white dudes, but that would be a bit much. It’s a funny film that doesn’t take itself too seriously. But you know what would’ve made it really awesome? The entire movie in Alex’s perspective instead of Clarence’s. THAT would’ve made for a great time. What’s done is done, though, and I don’t totally regret it.