The release of Pillars of Eternity: Deadfire, the sequel to an old-school RPG that’s close to my heart, was pushed back a month. An unfortunate state of affairs, to be sure, but tolerable if it gives the developers the time to eliminate bugs. It also gave me time to undertake another play-through of the original. This time, as a female dwarf druid from the Deadfire Archipelago, just to see if it becomes relevant.

And for those of us who appreciate traditional, yet forward-looking RPGs as I do, I’d like to talk a bit about what I hope and worry about in the sequel. Unfortunately, I was unable to get into the player beta that has been going on for some months now, for brutally fiscal reasons. So while I kept close tabs on the testers were saying, I must avoid making authoritative statements.

Instead, I’m going to cover some big topics that occur to me as I play Pillars of Eternity again and wait for Deadfire. Those are, in no particular order…

First things first: since I play a full spellcaster as my main character for the first time, I already can’t wait for Deadfire’s upgrade to spells with per-encounter uses, rather than per-rest. Having spells that only recharge on a full rest stunts the game’s pacing and makes balance very difficult. What we have here is three situations:

None of those situations are optimal. If we have either the first or the last, it means two extremes. If the second or the last, then it means those classes’ performance is similar to those with per-encounter or passive abilities, but they also sit on tactical nukes. There’s really no way to balance it against classes whose abilities are available a number of times every encounter, or entirely passive. It will inevitably swing in the direction of some classes having more impact on the battle than others.

Resting as a pacing mechanic is notoriously unreliable, because the game can’t really control how much we rest. It can dole out camping supplies and make some areas impossible to rest in, but players can bypass it all. In a tabletop game, per-rest encounters will rely on the GM’s willingness and ability to enforce a particular pacing. In a video game…there’s no GM to do that.

This change has met with mixed reception. Aside from those who think it’s dumbing down the game, there have been concerns over insufficient quantity of spells and the fact that they take too long to cast. Meaning the battle might be over by the time you fire off that spell. The latter two are legitimate, and I hope the developers address them.

But regardless of what issues arise from a shift to a per-rest resource management, I really think it’s for the best. Per-rest spells are a relic of old-school D&D that has stuck around by inertia. We can’t be rid of it in D&D, so let’s at least remove it from Pillars.

The health system of Pillars of Eternity is somewhat controversial. Its removal in favor of a more traditional health in the sequel, perhaps more so. The original system measures two health “bars”: endurance and health.

Every time you take damage, you lose both, but while endurance regenerates by itself and through abilities, health doesn’t. You have at least four times as much health as endurance, which means it drops slowly. Once your health becomes lower than maximum endurance, the latter is also lower. Dropping to 0 endurance knocks you out, dropping to 0 health maims you, then kills you.

In theory, I like it. It’s a compromise between old-school unforgiving attrition and a more modern style where everyone gets back to full strength after each battle. But I’m not sure it works so well in practice. Sometimes it does, and introduces slow sapping of your characters’ strength and forcing you to rest. But at other times, you either avoid damage enough for it not to matter or one character is focus-fired by enemies and their health drops dangerously low. So you have to rest even though everyone else is fine.

This particularly punishes characters who get into the thick of it without necessarily being tough and wearing heavy armor, but also back-like casters or shooters who end up target of enemy attacks. There’s no “taunt” mechanics that would straight-up force enemies to attack certain characters instead of others, either.

Deadfire will remove this duality and simply have health that acts like endurance did. Once you drop to 0, you’re once again knocked out, which results in maximum health dropping by 25%, in addition to injuries. But if it didn’t drop to 0, it will return after the fight just fine.

While I wish they could have tried to strike some sort of compromise and refine the health/endurance system, I can see why they did this instead. The old system was fiddly, random and many players didn’t understand it. Although in the last case I think the problem was with insufficient explanation. The game never tells us in plain terms how it works, so of course it confuses people. But other than that, I can respect their choice of predictable simplicity over continued tinkering.

We don’t know a lot about romance in Deadfire, only that it will be there. It will also include non-heterosexual relationships, something rather conspicuously absent from the original – with the exception of openly lesbian Maneha and her crush on Pallegina. Whether or not Pallegina reciprocated it is less than clear. She’s flustered by Maneha’s attention, rather than threaten bodily harm as she usually does, so maybe?

This has drawn some ire from people. Some complaints stem from elitism, believing that romances are something from a BioWare game and Obsidian should be better. Others come from a place of homophobia, believing that the existence of non-heterosexual romances are a sign the SJWs are coming.

An actual concern one might raise is accidentally getting our character tangled up in a romance. The developers promise a complex system of inter-personal relationships, where all sorts of interactions will influence them. That’s great…if it works. I expect that they will still be predictable to some degree. But I also worry about accidentally making an NPC attracted to us. Relationships developing in a way we didn’t expect or plan for is natural, of course. In fact, that’s what the supposed complex network of influence is meant to accomplish. But when it comes to romantic or even sexual matters…I feel it’s different. Having someone suddenly display such interest in your character can be uncomfortable.

We’ve seen it in RPGs before, particularly those from BioWare. That studio eventually adopted a system of making it absolutely clear we’re pursuing a line of dialogue that may develop into a relationship. What will Deadfire do here? Regardless of how they handle it, I do look forward to this new way of tracking relationships and influence among our companions.

One of the major features in the sequel is the ability to mix and match classes. Or, well, not mix and match, really. You can pick two classes and get abilities from both, but at a slower pace. While you will have a broader repertoire, you will get new tiers of abilities later than a single-class character of the same level would get. 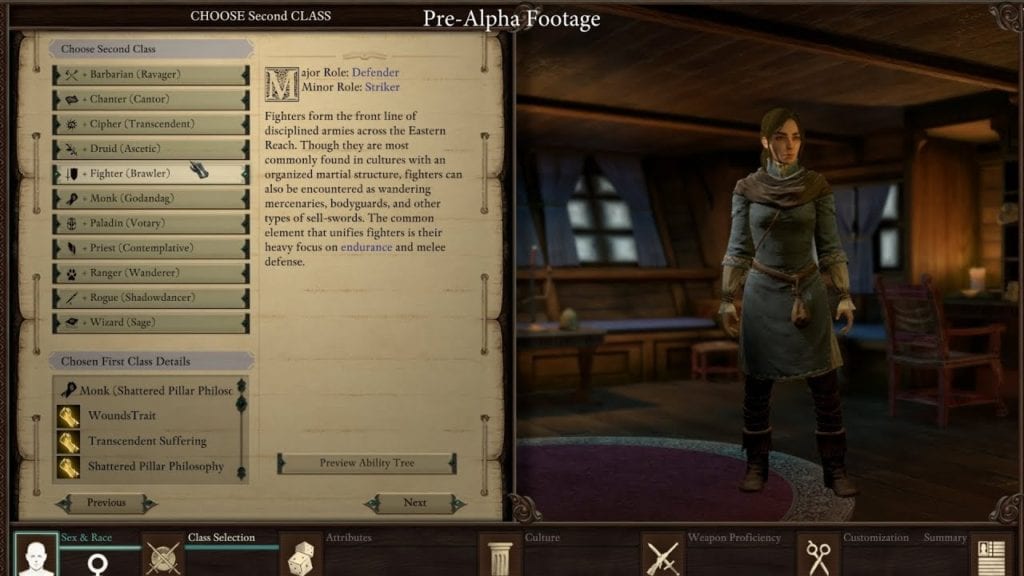 I’ve been excited and worried about it ever since its announcement. It has so much potential for customization, but also for breaking the game. The balance team certainly has their hands full with it. By some accounts, single-class characters feel not so much weaker as constrained, compared to multi-classed ones. There’s just not enough abilities to pick from, or ability points to use. There have been some hints on how they plan to fix it, so I hope they do. This is a tremendous opportunity and I look forward to playing a greatsword-wielding Fighter/Rogue.

There’s a good deal of other innovations Deadfire will include, but it would really take me a while to discuss them all. The new system for damage reduction and penetrating it, managing your ships, exploring the vast archipelago… this game promises to be huge, and what I discussed here is just the tip of the iceberg,

Whatever happens, Pillars of Eternity: Deadfire promises to stay on the same course of marrying old-school gameplay with innovative, fresh design. I have high hopes for it, with the usual trepidation over their getting dashed to the ground. But that’s just how it goes when a series doesn’t just repeat the same things over and over.

In this article:deadfire, Featured, obsidian, pillars of eternity, RPG