Those who have read Fandom Following’s 10 Commandments know quite well that we here do not fic-shame. To us, reading and writing fanfiction is an incredibly legitimate way to engage with a narrative. Yet sometimes it seems as if there is a shame inherent to fic. A stigmatization, if you well. I think we are all too familiar with the way dialogue tends to go: as soon as fic is mentioned, someone inevitably has to bring up Fifty Shades of Grey or My Immortal.

And sure, some of that is Sturgeon’s Law. Though isn’t it odd that there’s also plenty of poor fanart (even of the official variety) and off-base analyses, and somehow those practices don’t get dismissed on site? It’s not as if every damn book in Barnes and Noble is top-quality, yet I don’t see people swearing off reading. Fuck, you can even be the person that produces that schlockly fanwork, and people probably won’t judge you too harshly for it. 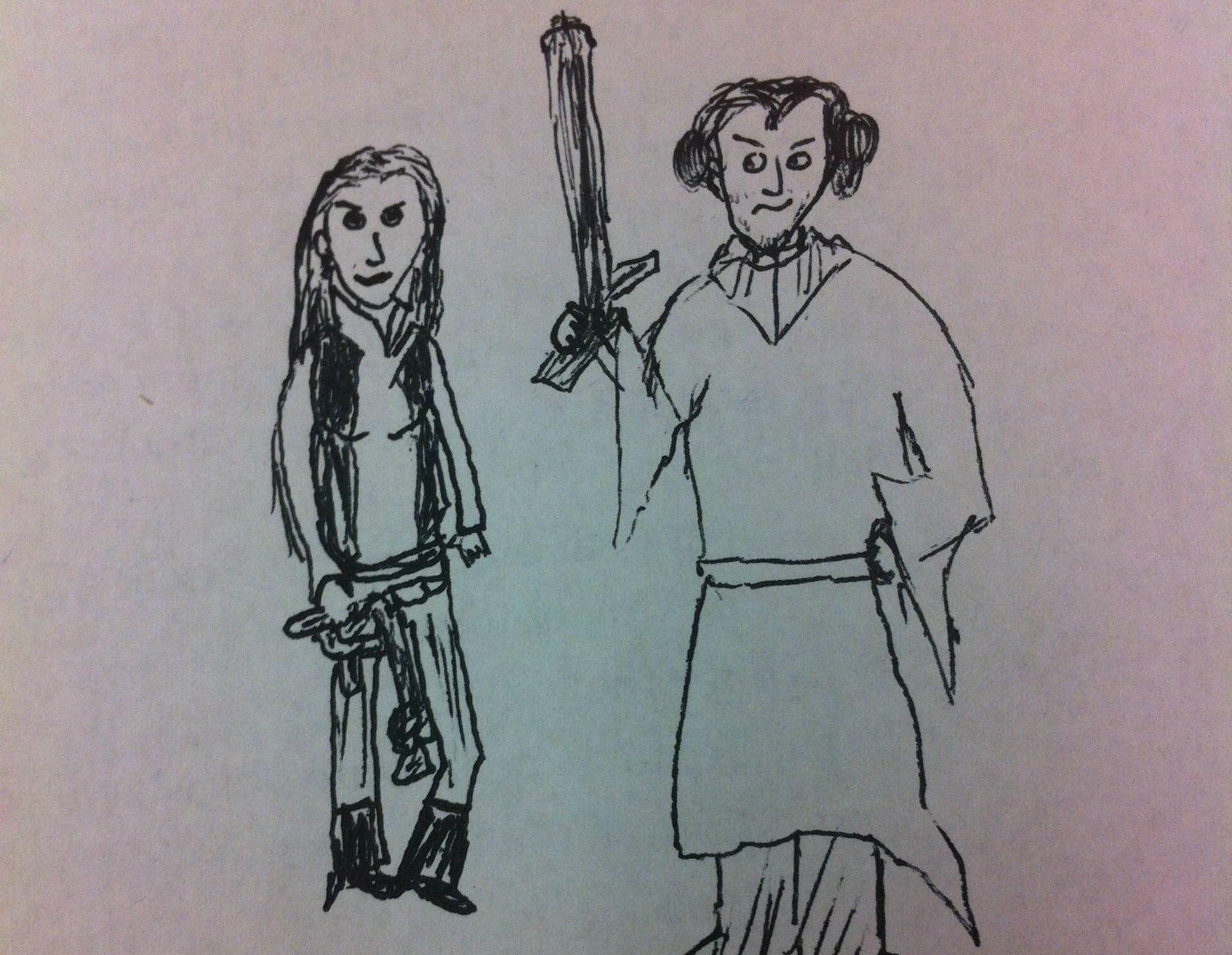 Awful fanart I did of Oberyn and Ellaria cosplaying as Han and Leia. Somehow my reputation will be okay.

But if you simply admit just to reading fic? Holy crap. You become “one of those” members of the fandom.

What’s the reason for that? Sexism probably. It’s kind of the reason for most things. But whatever it is, it was the stigma that I had heavily internalized until recently. Specifically, until I set out to publish my own fanfiction and realized just how fucking hard it is, and how valuable it can be.

It also led me to another startling realization; I have always been writing fanfiction.

It came as a shock. After all, I had been quite dutiful about avoiding it in the past. I even used to cast a disparaging eye on those “crazy” Avatar Spirit forum posters who would promote their work, when I just wanted to go on there to theorize about what was going to happen next. I just really didn’t understand its existence. After all, I was really invested in the narrative we were presented; why on earth would I care about someone else’s story?

But here’s what I didn’t understand: it’s impossible to engage with a narrative without transforming it in some way. After all, what does “engage” even mean? When I was really young, I was hugely into the Star Wars franchise. For me that meant watching them over and over, buying the Lego sets, and acting out lightsaber battles with my brother. It also meant that before bed, I used to pretend I was Luke Skywalker, and I’d fall asleep to these awesome fights I’d imagined for him.

I was writing fanfiction in my head.

In my early teenage years, this shifted slightly. I stopped pretending I was a character, and instead would be me, but stick myself in the middle of the narrative. I’d pretend that I was a muggle-born who just transferred from the American school and was Ginny’s BFF. I was Legolas’s younger sister (don’t ask) who also swore my bow to Frodo. These self-insert scenarios were, too, fanfiction, though unlike Ayn Rand I never thought to write them down.

We’ve all done this to some extent, haven’t we? I mean, action figures and Lego sets sort of inherently require you to write your own narrative.

But even if you didn’t, I’m still willing to gander you’ve dipped your toe into the canon-transformative pool. Was there ever an event that took place off-camera, and you envisioned how it went? Congratulations, you wrote fanfic. Have you ever explained a character’s action with a “headcanon,” or some kind of backstory event that was never explicated? Congratulations, you wrote fanfic. And seriously, the line between close-character analysis and some degree of fic is so blurry anyway.

Still…it’s fanfiction!!! (Gooba gobba gooba gobba). To be fair, “writing a fic” really does imply writing a full story, rather than one-off scenarios and short head-canons. And for me, getting over that hurdle was difficult. I was all about analysis, but the idea of taking time to read or write something so exploratory and (gasp) not in the canon was not appealing.

Then I got lucky. I found the gateway drug: canon-compliant gap-fic. It’s *like* analysis (what did happen to these characters in between these two events?), but obviously requires its own story.

For me, it was in Legend of Korra’s narrative that I found the gap I needed filled: the three years in between Books 3 and 4. I began thinking of all these things that might have happened to Asami Sato, until I realized that I wanted to read about it. Upon discovering that no such fic existed, I realized I had to be the one to write it.

And it was on that day that my heart grew three sizes. Or something. Because holy crap is fic a lot of work. If you’re writing your own story, you kind of have to think about purpose, themes, and above all, characterization. Why is it you’re exploring this aspect of the world? The answer to that makes the story take shape. AU fics especially force the author to prioritize characterizations, because that is the only thing tying the story to the original piece of media.

Once I made myself get into characters’ heads to write my first chapter, I was sold. Again, it was like analysis, but this time it was in a scenario of my choosing, working towards a goal that interested me. IT’S SO MUCH FUN! And even though I think I’ll always have a preference towards canon-compliant fics, the way that these characters jump off the page and take on a life of their own opens up a world of possibilities that is well-worth exploring.

This isn’t to say Sturgeon’s Law isn’t a thing…look at Game of Thrones. And not every fic will be wonderful or appealing to you, the same way there’s a lot of super crummy movies out there. But in the case of fic, it’s a lot of people starting out and using interest in a piece of media to hone their writing skills. That’s kind of awesome.

That’s the other thing about fic too: there can be close, direct interaction. Authors are normally quite open to feedback, and even in search of it. As you’re writing, you can get help from others in the fandom. It’s an incredibly accessible type of fanwork, and that’s nothing to sneeze at.

Though I’m definitely not able to focus on it as much as I would like, my fic writing has been one of the most rewarding experiences in a fandom to date. All I had to do to get over my prejudice was to actually try it. It’s almost as if Green Eggs and Ham had a point.

And that’s my challenge to you: write the fic. Because chances are, you already have…you just didn’t realize it.