In this week’s episode of The Flash, the much-hyped DC Week crossover, “Invasion!”, begins. Aliens land in Central City, and Barry enlists the help of all of his super hero friends in order to join the fight. However, there’s just one problem: the invasion might just be his fault. Meanwhile, Wally West continues to not be allowed to be great. 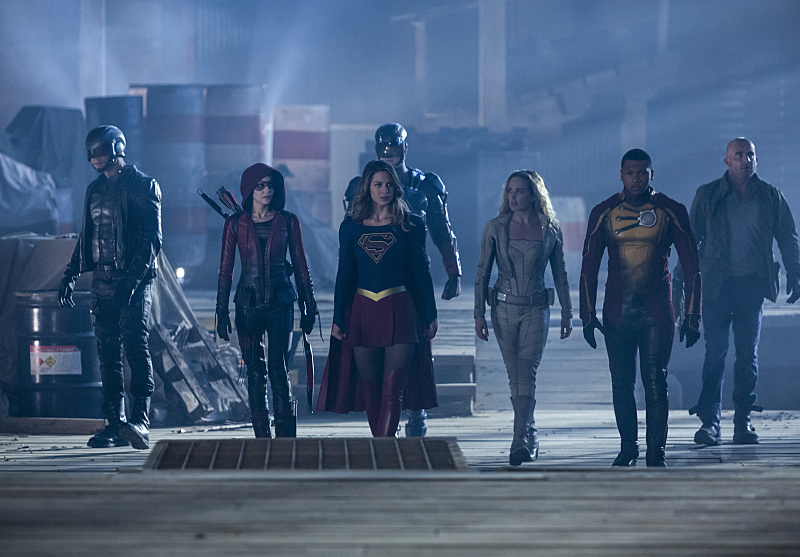 Let’s be real here kids: they really tried it. This was supposed to be a four-episode crossover, when the truth was that it’s really more like three. You do not need to watch Supergirl to understand anything that’s going on with “Invasion!”, because they replayed the one scene where Barry and Cisco show up on Kara’s earth in this week’s episode of The Flash. So, unless you did not need to be prompted to watch Supergirl, there’s a good chance that you have officially wasted forty-something minutes of your life.

Part of the hype behind Supergirl joining the other DC shows on the CW was the possibility of a four-episode crossover. The excitement for it built as soon as the project was announced. We here on Fandomentals rushed to make sure our reviews were all ready to go ASAP, specifically so that all of the shows would be covered promptly. So imagine my shock when I found out that that one scene lasted barely a minute, and would be replayed in the show I actually cared about.

Don’t get me wrong, I’m sure Supergirl is a great show, but, like The Get Down, it’s just not for everyone. Honestly, I should have known that something was up when Supergirl turned out to be the only show in the bunch that didn’t have an episode titled “Invasion!” this week. It just proves my theory that Supergirl will never truly be able to do a crossover the way that the other three can. Even with Cisco and Barry’s dimension jumping.

As usual, from this point forward, this is a spoiler-filled zone. Everything above it is spoiler-free, and everything below should be read at your own risk.

So it starts in the middle, in medias res, with Barry and Oliver up against Supergirl, Speedy, Spartan, Firestorm, Heatwave, White Canary, and the Atom. In all honesty, their biggest problem was always going to be Supergirl because Kryptonite has yet to be introduced to the Arrow-verse, much less Kara Danvers. Oliver probably had a contingency plan for everyone else, although Barry would have had to call in Caitlin for Firestorm. Thankfully, we flashback to ten hours earlier.

The flashback is what immediately kills the idea that Supergirl was ever a part of this crossover. I’m saying flashback like it’s a temporary thing, but the correct word isn’t coming to me. Ether way, in medias res requires that we go back to the beginning in order to better understand how it is that we got to the mess in the middle. And it is most definitely a mess.

“Invasion!” starts because some random aliens called the Dominators decided to land on earth for reasons that are never quite made clear. ARGUS and the government get involved, but this is not Amanda Waller’s ARGUS, so the president gets kidnapped. Barry Allen, having very little experience with aliens, decides to gather up all of his crime fighting friends and try to deal with it the best that they can.

It crashes and burns quickly.

As soon as Barry gets the team together, Jax and Stein take him and Oliver aside to play them a message that Barry had sent to Rip Hunter, forty years in the future. Future Barry warns of a war that the Legends would come back to, and how they shouldn’t trust anyone because they would only then have been affected by the change in the timeline since they would just be returning to it. 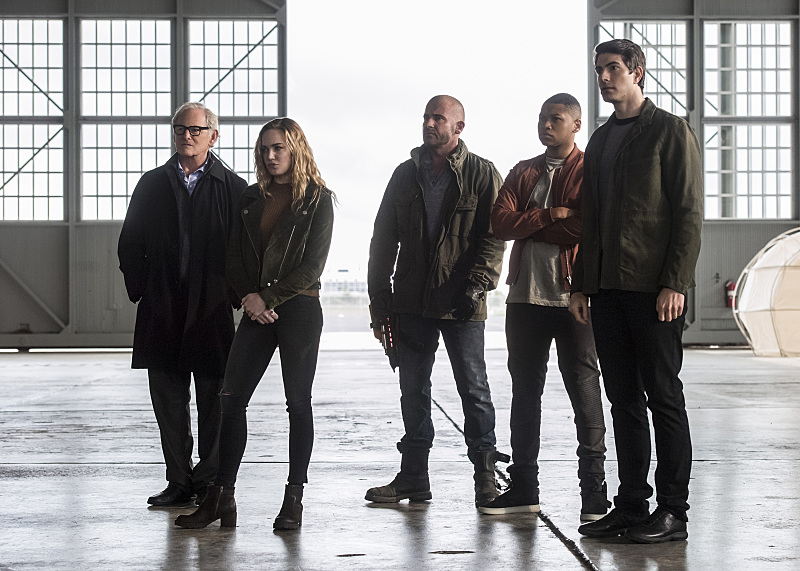 In any case, Oliver makes the decision not to tell the rest of the team about Flashpoint, which ends up not mattering at all because Cisco finds out anyway.

Listen, I don’t have any sympathy for Cisco’s pettiness at this point. It’s never made clear if Rupture had visited Earth-1 to claim revenge for his brother in this timeline, but, apparently, the Ramon brothers of Earth-1 didn’t take that chance to reconcile. And, again, because we’re never told how much time has passed since Zoom’s defeat in this timeline, we have no idea if Dante would have died even if Barry hadn’t changed the timeline. So Cisco was going to feel a way about it anyway. And honestly, he could have always snatched a Cisco-less Dante from another earth if he really wanted his brother back that bad.

So of course, Petty Cisco, who already can’t keep a secret, decides to confront Barry about it and force him to tell the rest of the team. Which, of course, doesn’t go well, but the reactions to it are, honestly, more extra than necessary. You have Sara, who has at least twice tried to kill Damien Darkh in an earlier time period because of his involvement in Laurel’s death. You have Ray who, as recently as two or three weeks ago, lost his Atom suit to a Japanese warlord. Honestly, for the amount of times that the Legends team messed up something in history, and then had to go back a week earlier to fix it, they really have no room to talk.

And then there’s Diggle, who apparently takes issue with his daughter now being his son. I don’t watch Arrow, so I don’t know what went down between Diggle and Lyla, but I’m still not seeing a problem if they still had one kid together. Barry has nothing to do with the chromosomes Diggle releases, so there’s really no reason to be angry.

And one more thing, I’m not fully convinced that the Dominators coming to earth is the result of Barry’s affecting the timeline. Nor am I convinced that this was the war he was warning Rip Hunter about. Maybe it’s because I haven’t seen the other two episodes in the crossover, but this fight with the Dominators was not nearly dire enough for Barry to sound so weary. And if the timeline changes are all about choices anyway, there’s a good chance that the Dominators were going to come to earth anyway.

And Cisco would actually know all of this if he bothered to use his powers regularly.

In any case, Barry decides to sit out the initial mission to save the president, and Oliver ends up staying with him. It’s a trap, of course, which is how we ended up where we started. With seven mind-controlled super heroes, one of whom is an indestructible alien, against Green Arrow and the Flash.

Also, the president’s dead. So there’s that.

Backtracking a bit, “Invasion!” introduces us to Wally’s struggles of trying to be the new speedster on the block. He is immediately shown to be faster and more everything than Barry, but Iris has no interest in letting Wally get in on this superhero business anytime soon. On the one hand, Iris is right that aliens would be way too much for Wally’s first fight, but, on the other hand, she really needs to let Wally be great.

Wally does get to be great later on, as he is the one who saves Oliver and Barry from certain doom. However, he is immediately taken out by Supergirl, and spends the rest of the night unconscious.

In the grand scheme of things, without Wally’s involvement, Team Flash would have had no fighting representation besides Barry. Neither Cisco nor Caitlin fight on a regular basis. For people who work with metas, they both rarely use their powers – Caitlin more reluctantly than Cisco. I’ve seen it said that if Cisco actually used his powers more, he could be the most powerful person in the Arrowverse, but the reality of it is that nobody on Team Flash actually knows how to fight. Barry can throw a few punches, but Iris is the real heavy hitter in that relationship. Joe can hold his his own, but he’s perfectly fine being a detective. There’s no one with any formal hand-to-hand combat/ martial arts training on that team, and this has been a problem for three seasons.

However, because everyone else is essentially treating him with kid gloves, Wally goes to HR to be trained. Considering that this is the same HR who has taken the time to research Team Flash and all of the things that they’re lacking, there’s a good chance that he will make sure to add fighting to Wally’s regiment. I am continuing to be convinced that HR is the writers’ way of fixing minor plot points that are beginning to turn into major issues. Now if they could just take of Barry’s living situation, we would be golden.

Oliver and Barry do eventually manage to defeat their friends, by manipulating a mind-controlled Supergirl into breaking the object controlling her. However, the episode ends with all of Team Arrow, plus White Canary, being beamed up by the Dominators.  It looks like Oliver is going to have some alternate timeline choices of his own to make, but that’s not my story to recap.

All in all, I think that “Invasion!” was a fun ride, story issues aside. It’s still false-advertising to call it a four night/ four episode crossover, but it’s probably the most powerful I’ve seen Supergirl get to be, since I don’t watch her show. Admittedly, there was no Westallen, but the West family still got a storyline. And for the first time in a long while, I’m actually excited about an episode of Arrow.

But what did you guys think about this episode? Was it good? Was it bad? Were you as pissed as I was that Wally and Jax didn’t get to meet? Let me know in the comments!

All images courtesy of the CW/Warner Bros.