It was difficult, when writing this piece, to not be overly repetitive with respect to my piece about the first Iron Man movie. The title character, Tony Stark, alias Iron Man, remains everything he was in that film. That is, he is an unrelenting, narcissistic asshole.

This problem must have its origins in the ending of the  first movie. Any development that Tony received from his experiences, captivity, and the need to undo the damage his arms company did, was seriously undermined when he proclaimed to the world that, “I am Iron Man.” He proved in that moment that his motives were never entirely altruistic. Or, at least, they were not stronger than his need for public adulation.

Is he more self-aware of his jerkitude, at least? It’s possible; he mentions intending to eventually apologize at one point, but this is the man who throws a giant year long party, names it after himself, and then spends his opening speech literally taking credit for world peace.

I have a good deal of trouble ever being on his side. It’s rather fair to say that he proves over the course of the movie that he really should not be trusted with the loaded gun that he invented. It may be hard to argue that the US government would do much better, but Slimy Senator had a point. And he was absolutely right about the danger of others developing the same technology.

I’m with this guy.

The million dollar question is, of course, “am I supposed to be on his side?” Because, again, just like in the first movie, the entire universe seems to be structured to prove that Tony Stark is right. And the narrative does as well? I mean, you have Rhody asking forgiveness for his rather reasonable actions, and Slimy Senator being forced to pin a medal on Tony chest.

And the in-universe public clearly adores him. He makes Senate committee meetings fun!

To be fair, there are a few attempts at seriousness here, mayhaps even a “theme.” Tony is dying, and this obviously makes him give some thought to his legacy. So people say the word “legacy” a bunch of times. This makes it a theme, right?

Well, Tony’s fear of death manifested more in reckless behaviour, and even more emotional distancing from the people who bend over backwards to put up with him, than with a preoccupation with what he’ll leave behind. The Ivan Vanko character seems to do a lot more with this theme than Tony does. But even then, the film almost looks like it’s trying to distract the viewer from this with the ridiculous, and not at all funny, antics of Justin Hammer. And how stupid and inept must this man be in order for Vanko to get away with what he did? This head of a multi-billion dollar firm breaks a criminal out of prison and sets him up with unlimited resources, and then provides so little oversight that he can install a crazy terrorist attack program. In Russian.

And even when the theme of legacy is front and centre, it seems half-finished. Vanko wants to destroy Howard Stark’s legacy, first by killing Tony, and then by just making a crap-fest of the Stark Expo. Like, that’s the plot, right? But what did this really mean in the context of the film, from a thematic perspective? The company was already in a lot more trouble because of Tony’s erratic behaviour. Vanko’s mastery of the technology exposed the problems with Tony’s insistence on retaining sole control over it, but, again, Tony was proven right in the end. So was I supposed to think that Vanko and the government were both unjustified?

All in all, Ivan Vanko, and Mickey Rourke’s performance, both seem like they belong in a different, dare I say better, movie. Honestly, at this point I would rather see a Whiplash movie than another Iron Man one. He was actually menacing, and was satisfied with a moral victory. He could have been a good foil to Tony. Clearly he was intended to be. And the story of their fathers conflict continuing into the next generation could have been quite interesting. But instead, he was just a mad genius with tats.

I won’t harp on the scientific illiteracy that this movie betrays, (dude, elements do not work like that) because that just seems to be a part of the MCU. I have to accept it. But I can’t pretend to like it. Or the “lone wolf scientist” trope. This makes science seem like magic. A conception that can lead to a lot of harm in society.

And you know what also harms society? Sexism.

There are two primary female characters, and both make me raise my eyebrows.

The first is Pepper Potts. She’s a legitimately “empowered” woman in many ways, but in other ways I’m less impressed. She clearly capable—she sometimes feels like the only capable person there—but this is balanced by the way she allows Tony to treat her, and her general cattiness. Perhaps these things are both meant to show her feelings for Tony, but I can’t help wishing this didn’t manifest in slut shaming the same woman for the second movie in a row. 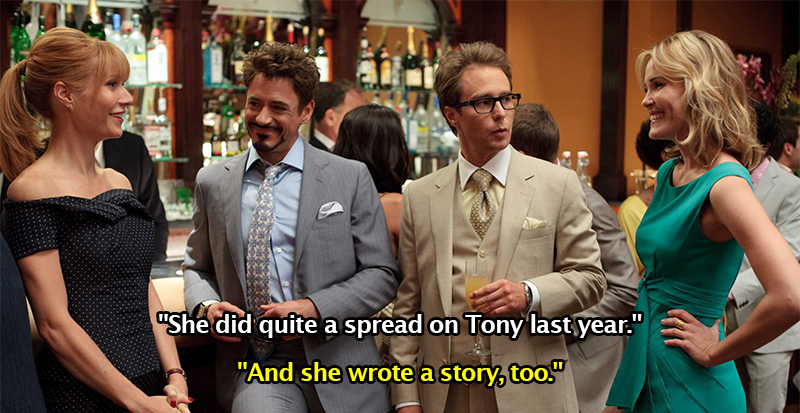 Ms. Potts also took some time out to be catty at Natalie Rushman, alias Natasha Romanoff, alias Black Widow. Who added so much to this picture.

Well, I suppose the hope was that she’d add quite a bit for the presumed audience of straight males between the ages of eighteen and thirty-five. I mean, the way she’s being used here is not at all subtle.

And this is almost made worse by the fact that she isn’t a bad character, not even from a feminist perspective. She’s clearly capable in the Super Secret Agent department (though I still have no real clue what SHIELD is… other than run by Samuel L. Jackson) and she’s even very capable at being an assistant/target of sexual harassment.

The way Tony creeps on her is gross, and she just shrugs it off and does her job. Which, yeah, no woman should have to do, but I’ll give her a pass because of the Super Secret Agent thing. Unfortunately, the only one more creepy the Tony is the camera. And was I supposed to be on Tony’s side when he’s all hurt by her “betrayal”? It’s a waste of a good character, just like Vanko is.

This film has not improved in the six years since I first saw it on a bad date. It’s all over the place, wastes time on indulging a spoiled boy in an adult body, and misuses the few elements that may have had potential.