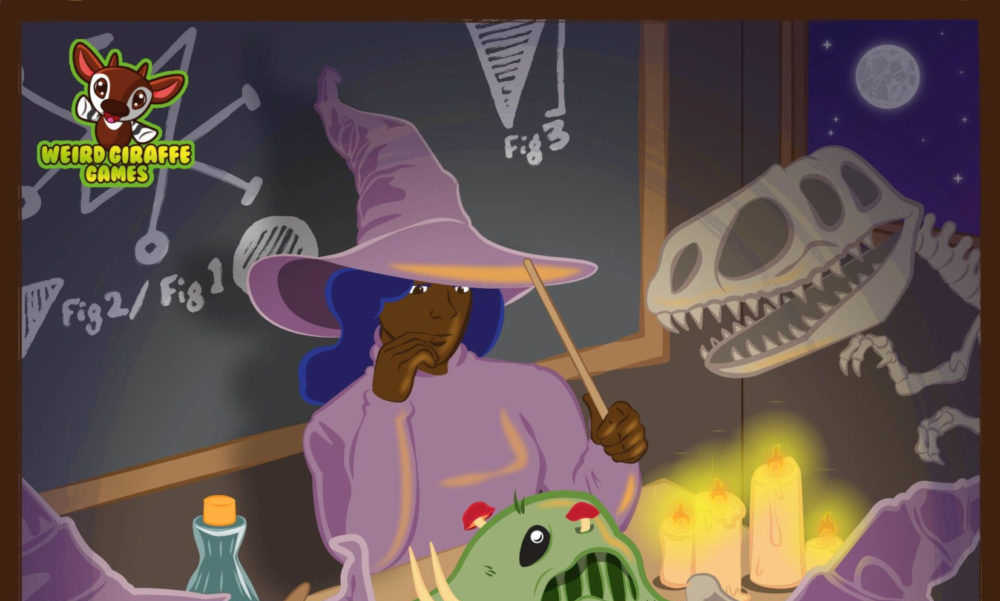 This is a spooky month for Kickstarters, and there are few a spooky as the one I’m covering today. Launched earlier this month, Studies In Sorcery (formerly Degrees In Darkness) is a delightful little game of necromancy from Weird Giraffe Games (Tumble Town, Roar n’ Write). It’s all about going to magical grad school so, naturally, I had to check it out.

My version of the game, as is standard for such things, was a prototype. I can’t 100% judge everything about the appearance and contents based on what I received, especially since my version even had a different title, but I got a good idea. Artistically, it strikes a very good balance between the cartoony and the macabre. There’s plenty of skulls, worms, and mushrooms here (as all the best games do), but it’s not outright gross. They’re rendered as they might appear in a magic textbook.

The things you’re constructing range from the gross (worm golem) to the heavy metal (flying, flaming skull), and each have their own unique flavor.The cards themselves have the look of a piece of parchment out of a book. Even the moon, which plays a big part of this game, looks hand-drawn. It’s a great marriage between theme and design.

The gist of the game is that you, the magical graduate student, need to collect the funding and materials needed to complete your thesis. Your thesis, in this case, is an an unholy collection of macabre monstrosities cobbled together from the dead. As a graduate student, you don’t exactly have a lot of resources available, so you have to go digging in the graveyard to get either the stuff you need or stuff you can sell on the black market. This is where the game’s “push your luck” mechanics come into play. It makes the resource management aspect of the game a lot more fun when you don’t really know what you’re going to be working with, and even the enticing bone pile with lots of things in it might not have anything you need for your project.

The game then becomes one of card drafting, as you use your funding to start the projects that make up your thesis. Your thesis, by the way, is a secret goal you get at the start that rewards you points (fairly standard for engine builders). These have three levels, each one more expensive or complicated than the last. . Once you’ve started a project, you allocate your acquired resources to it until it’s done. As a minor note, when you do this you’re “committing” the resources, and the other players and I had fun saying things like “I commit worm.”

When completed, these award you credits (victory points) and special abilities that either trigger on completion, can be used as an action, or are affected by the different phases of the moon (the mechanic which tracks rounds and games phases). These mechanics frequently interact, and like most games in this genre your goal is to build up your cards so they combine into bigger and better turns each round. You play until you’ve competed all four semesters of your degree (presumably your magical master’s is not terminal) and then the winner has the most credits at the end of the game.

Studies In Sorcery combines a lot of really neat mechanics into a very fun, fast-paced game. The art style and theme are on point, with a black humor to it that I personally love. You could easily make the game a lot sillier or a lot darker, but the balance that they’ve struck here is on point. Gameplay wise, the rounds move quickly and there’s not as much of the hemming and hawing that can make engine builders slow down to a crawl. The rapidly shifting field and elements of randomness (what projects show up, what resources appear) also keeps the game light and prevents anyone from getting stuck or snowballing out of control. All of the strategies seem valid, and it’s fun experimenting (no pun intended) with different approaches to the problem. Whether you’re looking for something to whip out on Halloween, a fan of engine-building, or a grad student feeling nostalgic your for the days of ramen and research, Studies In Sorceries is definitely worth backing.