Another week, another fun episode of Legends of Tomorrow. Set up since the previous hour, “Moonshot” has our legends on a mission to get the Apollo 13 crew back on track for the accident all the while trying to get the remaining piece of the Spear of Destiny.

We open on 1956 right at the moment Rip Hunter had left Henry Haywood aka Commander Steel to make a life for himself, out of his timeline, to protect a piece of the Spear. We find out that Henry had left a wife and a newborn baby behind – the soon to be Nate’s estranged father. The Legends arrive at the exact time to intercept the duo, but are too late, missing them for a mere second.

The team reassembles back at the Waverider and Encyclopedia Browns their way into figuring out exactly where Henry ended up doing for himself: as an old military pilot, the obvious conclusion is that he joined NASA which is corroborated by Gideon’s search (wow, I just realized Gideon could be seen as a future version of Google!). Then, they travel to April 13th, 1970, the day the Apollo 13 ship got in the accident. 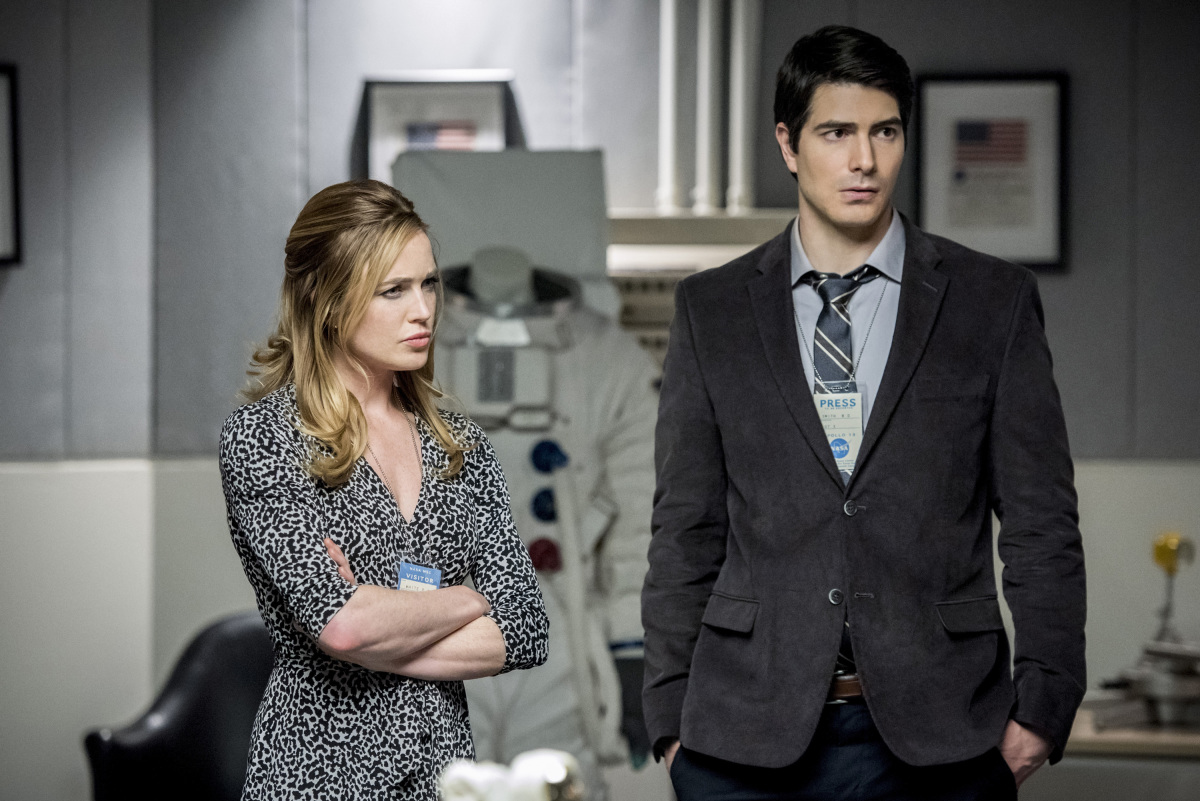 When Rip finally gets to Henry, he is met with a right hook for the ages: turns out Henry holds a big grudge because he ended up regretting having left his family behind even if it were for the sake of duty. He tells the Legends that he had sent the piece of the spear he had inside the cane that holds the American flag on the Moon with Neil Armstrong. As they intend to go get it, they get the news that the Apollo 13 ship has not crashed and, therefore, history had been changed.

The Waverider takes off towards the Moon leaving Martin, Jax, and Mick behind at NASA’s control room, infiltrated to take care of things when contact is established between the ship and the room.

Up in the air, Ray gets inside the Apollo 13 ship to find the two of the pilots unconscious and the other one to be Eobard Thawne. The two fist fight as Eobard is not able to use his speed without gravity (nice loophole) so he ends up defeated, but damaged Ray’s suit nonetheless. The ship decouples in two and Ray is forced to land-crash it on the Moon.

Meanwhile, the other part of the ship has gone loose so the Waverider goes after it. Sara makes a tough call when she sees that there is a meteorite shower coming straight for the Apollo 13 half, deciding to use the Waverider to successfully shield it albeit taking severe damage. Therefore, with the ship malfunctioning, Sara tells Ray that he needs to launch his half of the Apollo 13 himself.

After he retrieved the piece of the Spear from the flag and one The Martian reference later, he finally gets around to fixing the module he’s in. However, a restrained Eobard convinces him that this is a two person job and that he has valuables skills as a scientist from the future. They manage to get the job done and the Legends are able to reattach the Apollo 13 halves and rescuing Ray and imprison Eobard.

However, due to the Waverider’s malfunctioning, the Legends will have a hard time landing on Earth. As Ray asks Eobard for help, it is up to Sara to make the decision on whether to trust his scientific input or not. She does, thankfully, but it wasn’t enough as Henry Haywood has to sacrifice himself for the ship to land well, taking a toll on Nate who was really enjoying getting to know his grandfather. 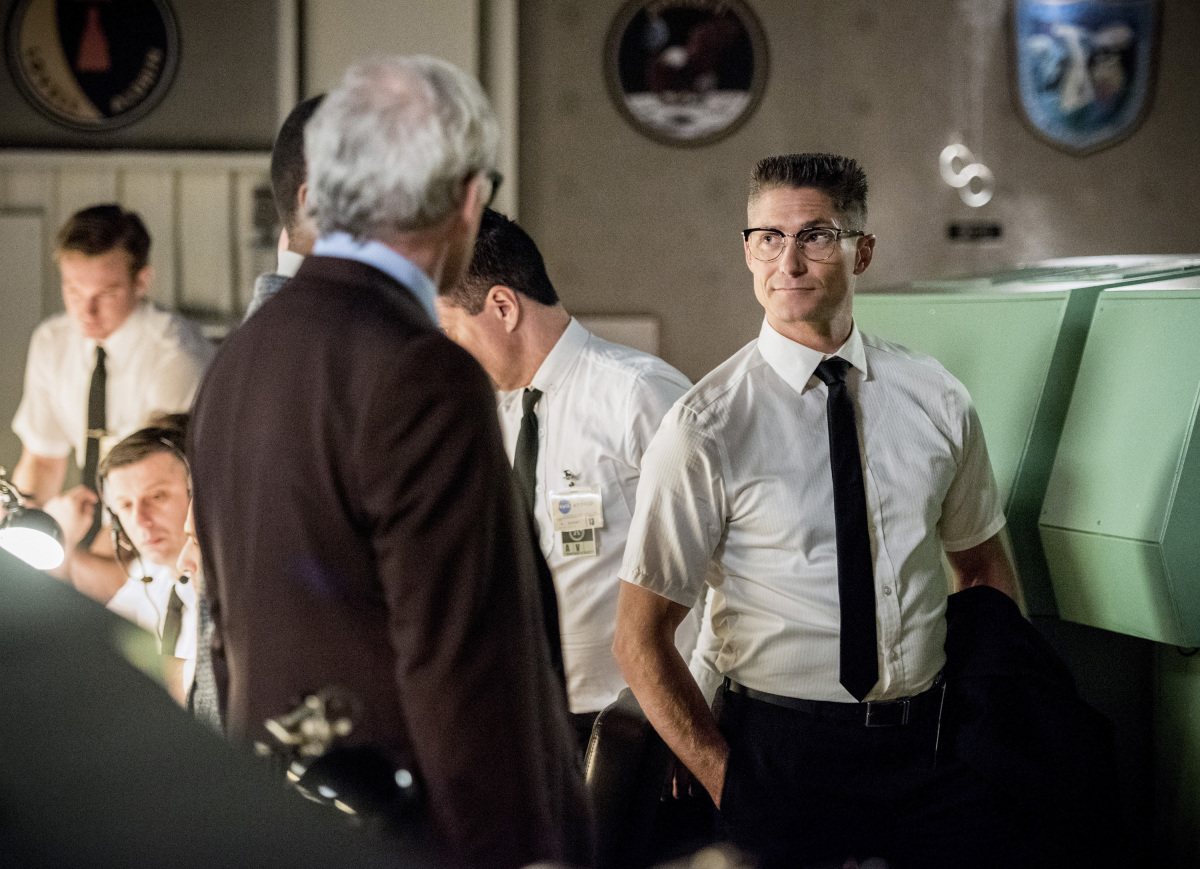 As the bigger arc of the episode unfolded, there was more to Amaya, Nate, and Henry. You see, Henry had gotten the idea that, when he saw Rip Hunter, he could ask him to get him back to his own timeline, 1956, so he could be reunited with his family. Nate obviously takes this as a great opportunity because he also had an estranged relationship with his own father, Hank. He saw this as a potential chance for the Haywood family to heal.

However, as she eavesdropped on the conversation, Amaya confronted them about it because this decision could influence the Haywood family in unexpected ways—it could even prompt Nate to never becoming a historian and never finding the Legends back in S02E01 when he officially joined the team.

Nate obviously takes this pretty bad and explodes at Amaya with the information he got last episode from Ray about her village and her granddaughter, Mari McCabe, current day Vixen. He doesn’t tell her the whole story, but just enough to get her interested.

Unbeknownst to Nate was that Henry had rigged a NASA contest to allow a person to visit the headquarters during the Apollo 13 landing and that special someone was 14-year-old Hank Haywood—Henry was going to take the opportunity to meet his son at least once. This adds up to Henry’s sacrifice in the end when he needs to eject a part of the ship for the landing to be precise and eject himself in the process. No matter how much Nate begs and offers to take his place (as a superpowered person would), Henry ends up killing himself never really getting to know his son. 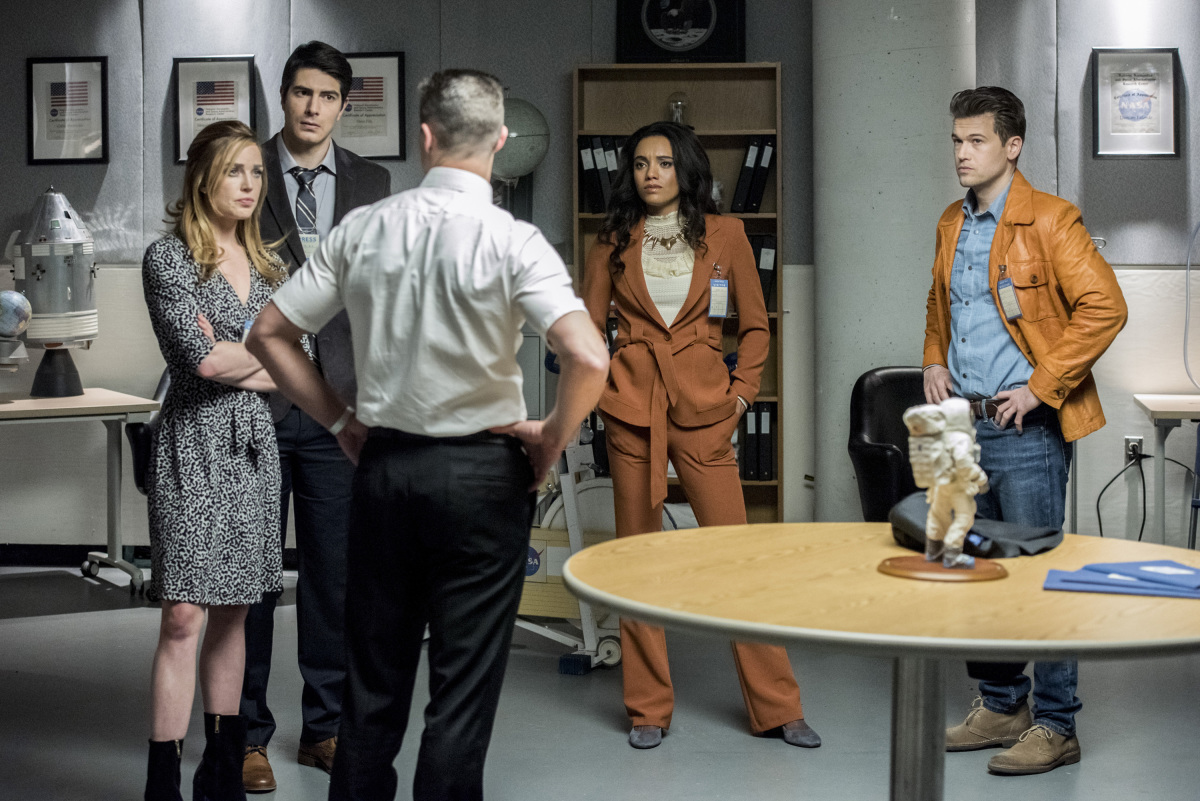 Now, after the landing, Nate sees his pubescent Father and tells him what Henry asked him to: that he was sorry he was never able to meet him. The moment is pretty decent emotion-wise as Nick Zano does a good job on showing all of this effervescent/boiling familial relationship that has gone awry for three generations. It is Nate’s hope that Hank becomes a better dad after listening to his own time traveling son.

Finally, Eobard is able to get off the ship because he needed to get away from the Black Flash that is still haunting him. Despite some bickering during the episode, Rip officially concedes the role of Captain to Sara (hooray!!!) and Amaya asks Gideon to show her the future. We are left with  her as she witnesses the fire that took down her village at Zambezi and pictures of Mari being Vixen.

Holy mother of cow, this season has been truly a blessing! As someone who had little to no knowledge about the Apollo 13 mission (had to do a bit of research on it, in fact, to learn what was supposed to happen had the future remained still), the episode really did help out a lot. Plus, I love the current media focus to NASA after watching the amazingness that was Hidden Figures. In fact, I kept waiting on a little nod to the African-American women who helped design the space program throughout the episode and that was probably the only little detail I could complain.

Oh, wait, there’s something else: my fatal second hand embarrassment got through the roof when Martin started to impromptu sing to distract the NASA people from checking in with the Apollo crew while the Legends were doing their thing. I mean, it was funny, I just couldn’t look straight at the screen. Shout out the editing team who decided to put more scenes of Victor Garber singing during the end credits.

Also, and this is quite the thing I have noticed the past couple weeks watching the DCTV, a big congratulations to the sound mixing and sound editing team Legends of Tomorrow has. I particularly love when they put in that small vibration sound whenever the Reverse Flash is focus or just an insidious thought. 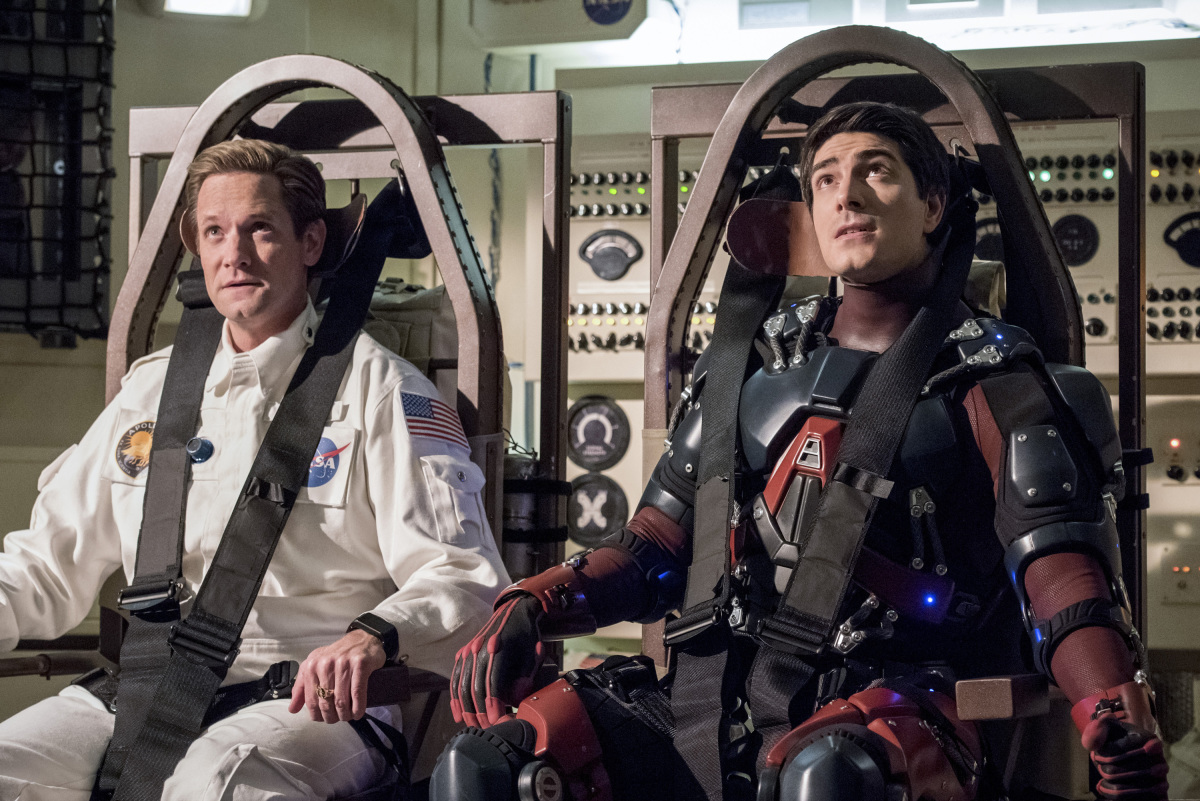 Back to the story however, I am really damn glad that the Rip V Sara debacle on who would be the captain has been settled to my pleasure. Aside from Rip himself saying that she is much better than him, it really adds to the narrative that the team really does listen to her when they are in need of a decision-maker. Sure, there were a couple moments here and there this season when someone doubted her and then in this very own episode when both captains seemed at odds with each other, but Sara was acknowledged fully and 100%. Plus, she got a nice throwaway line about Rip stranding her in the first episode at a time where she would be burned as a witch which was a total dick move.

Nate and Amaya got their fair amount of friction this episode, but at least it wasn’t because of their relationship directly. Nate did mention that they had no future together because they had stolen Amaya from her timeline which I’m really glad they did because I absolutely love her with the team. As a Vixen fan (her episode in S4 of Arrow being one of the highlights of a dreadful season), it is amazing that Amaya learned about Mari and it would be great if they met each other. Yes, unlikely, I know, they already shot the end of the season, but still, it’s nice wishful thinking.

The familial urgency the Haywoods had this week was also off the charts. Several of our contributors for the website absolutely ADORE this type of “stained” relationship between Parent and Child when there’s not only a lot of love, but also a lot of pain and lack of communication. Seeing two of these in one 40 minute episode was a real tear-jerker. We know from the dialogue how painful those 14 years away from his family was for Henry and how that helped mold a more distant and resentful Hank that didn’t provide a lot of dad-son times with Nate. Still, it is from that small and touching conversation between Nate and Hank that he finally gets to say, indirectly, that he loves his dad. I’m curious to see whether they will follow that thread up in future episodes.

Now armed with two of the pieces of the Spear, the Legends will trail away next week to meet with J. R. R. Tolkien to get the other ones from the Legion of Doom—I’m expecting someone, probably Nate and/or Ray, to fully fangirl again just as they did with George Lucas. It’s all sorts of exciting even if I’m not a total Tolkien geek to see how this show will give me more lovable entertainment.

In this article:DCTV, legends of tomorrow, moonshot