It’s here, guys: the season finale! After a trial edition of Doomworld that the Legion of Doom are hellbent on turning permanent after Eobard destroyed the Spear of Destiny, the Legends go back in time to 1916. The goal? Prevent the Legion of Doom from getting their hands on the godly object, thus breaking #1 rule of time travel: interfering with something that had been interfered with before.

Rip Hunter gets all the systems back up on the Waverider as it finally has enough energy to travel again. We get the usual disappointment that the Waverider had been resized to a toy, but it won’t stop him from looking for the Legends. Speaking of, they are trying to get communications back with Rip as Nate is grieving over Amaya. The Waverider zeros in on their location. They realize that, before any time traveling can be done, they need to get its size right and plan to use Ray’s Atom Suit. The Legends break into STAR Labs and, despite a few minor setbacks, they fix the ship and can finally go save reality. 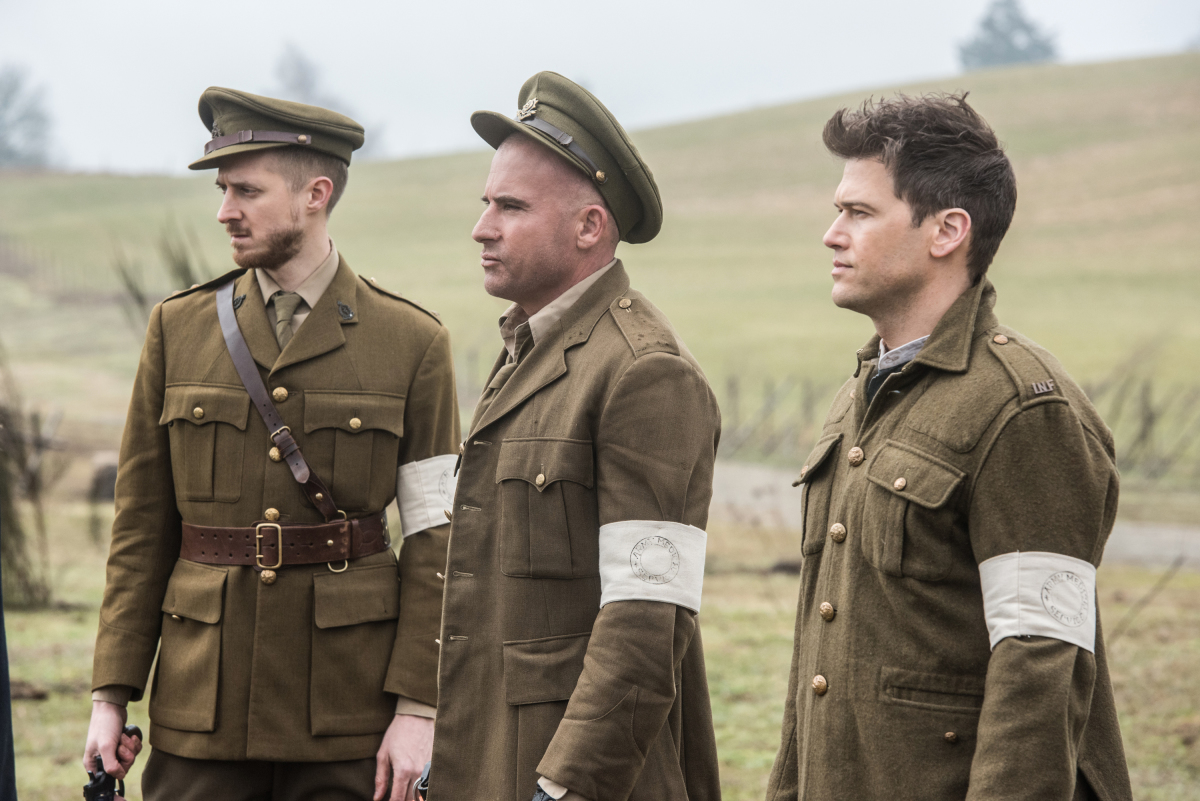 Finally back in World War I, they finally have the talk as Rip explains the stakes: time doesn’t solidify right away and they should at least mitigate the time paradox at 1916 by avoiding any contact with their other selves. The initial plan is to get the blood of Christ and leave it at the Church which, if it works, would erase that version of themselves. So, Ray finds the vial with the blood, but 2017-Doomworld!Eobard Thawne goes back in time, breaks the vial, and takes Ray’s heart out of his body, killing him.

The plan then shifts to stealing the spear and getting it out of 1916, which would entail in them having to interact with the other selves. We see Leonard Snart’s first interaction with Mick once again, but from the villain’s perspective. As he returns to his Improvised Evil Lair/Tent, Eobard brings back Malcolm from his trip to help sort out the issue with the Legends.

Mick, Rip, and Nate enter the Waverider as their other selves had left for the Church. They end up immediately running into Sara, Martin, and Jax, but the real kick is when Nate sees Amaya again. He’s speechless and pretty emotional. As Mick gets the spear, Sara tells them that they are trapped inside the ship because their old selves had returned from the Church. Sara and Jax try to remedy the situation by keeping them out of the ship, but as all of them have communication devices, they end up thinking that the 2017 versions are impostors and start fighting. It doesn’t take long for them to realize that it’s just themselves.

Both Saras get together to think of a solution. They debate whether or not they could realistically use the Spear and end up realizing they are not strong enough for it because it ends up “feeding” on their desires”. Future Nate tells Past Nate to stop wasting so much time and tell Amaya they love her. The Legion starts attacking the ship from the outside, breaking its defenses. They try to make a time jump, but a Time Storm due to the paradox ends up holding them back in their location, exposing the ship to the World War I fighters, and potentially breaking the Waverider.

Future Sara tells Past Legends that they need to make their way to the other Waverider with the Spear as the Future Selves never planned to get out of 1916. The teams start facing the Legion sans Eobard, and it results in several deaths/incapacitations. Future Jax sacrifices himself for Past Martin, Past Jax stabs Malcolm, Snart kills Future Mick, Past Mick blasts Snart, Damien kills Future Nate, and both Saras knock Damien out. 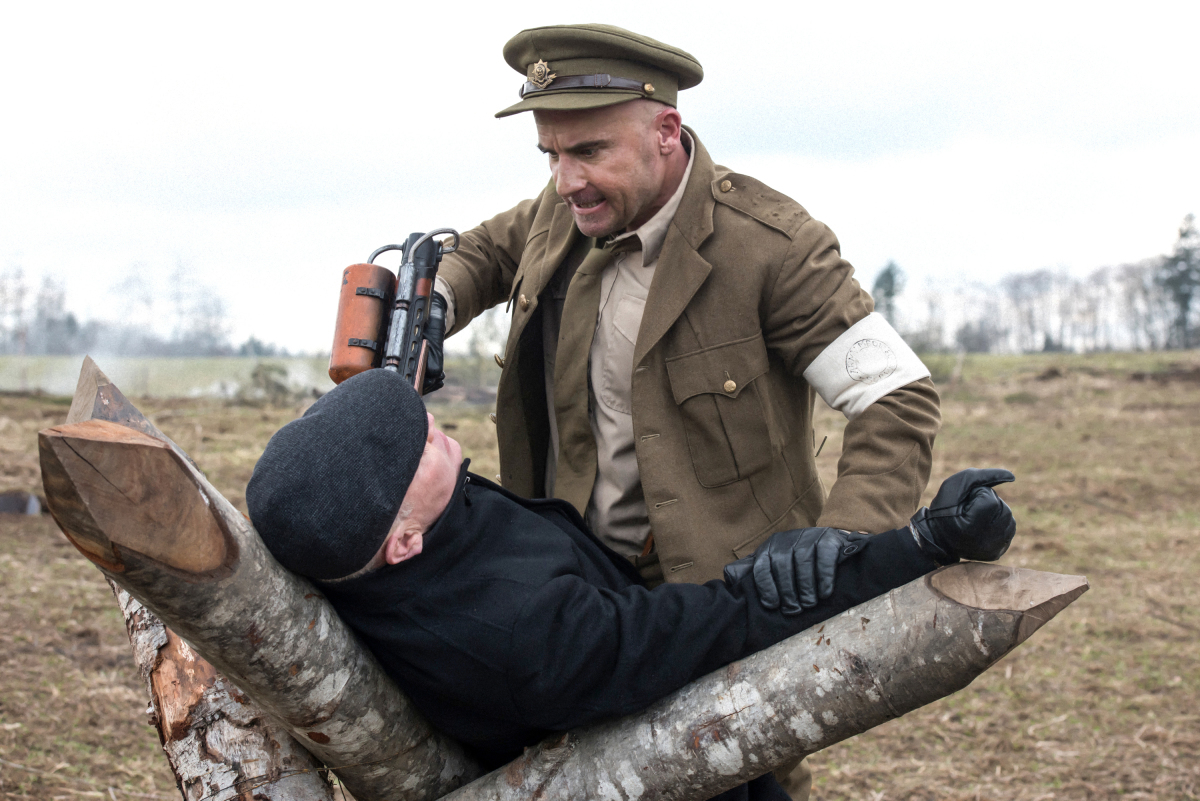 As the group of the remaining future and past Legends arrive at the rendezvous point, Eobard comes forward with a bunch of other Eobards he called from the past to help out. The several Thawnes start attacking (one at a time, how polite!), and Amaya tells Sara to use the spear. She initially declines, fearing for the darkness in her soul, but positive group reinforcement gets her there.

She wakes up in a Dreamworld, a movie night riddled with wine and the late Laurel Lance as the voice of the Spear. The sisters talk about how much good Sara could do if she took everything Arrowverse-related back. But she won’t do it because that’s not the right thing even if it would bring Laurel back. Sara wakes back up in 1916 with Eobard taking the spear from her hand and promising to use it to erase the Legends from existence, but as he begins to use it, he realizes that Sara did make a change in reality by depowering the spear.

Eobard threatens to kill Sara, but the Black Flash arrives. He drives his hand through Thawne’s heart, making him disappear as he is virtually erased after everything that happened with Flashpoint and Eddie Thawne killing himself back on season 1 of The Flash. The Black Flash exits, leaving Past Sara to say goodbye to her future self who disappears into thin air.

The Legends leave the other members of the Legion at the time and place where Eobard first recruited them after erasing their memories. Sara and Damien even talk about how she has grown enough to be okay with allowing him to go on his path to kill Laurel because that’s how things should stay in the timeline.

As Amaya is leaving for 1942, Nate asks her to take him with her, but in the end, Amaya ends up staying because her feelings for Nate should be stronger than any time collapses that may ensue. However, the team suffers a loss as Rip decides to leave because there’s nothing else he can teach Sara about how to be a captain.

The Legends finally concede to Mick’s incessant begging as they set course for Aruba, 2017. However, another Time Storm due to their changes in 1916 holds them, making the Waverider exit the temporal zone. They land in 2017 Los Angeles, but a futuristic version of the town, filled with different buildings (was that the Big Ben?) and also dinosaurs.

My god, what a marvelous season. Apart from the one episode I didn’t bother to watch — looking at you, Jonah Rex — it’s actually hard to pick a favorite. “Aruba” is definitely a serious contender. Small issues like Eobard’s speed and action fluctuating as necessary were still there, but the rest was spot on perfect.

Amaya was not only brought back from the dead, thankfully, or we would riot, but also decided to stay aboard the Waverider. I am practically riddled me with joy. I love what she brought to the Legends as a sort of antithesis to Outlander‘s Claire Beauchamp. Amaya is a woman taken away from a time where society had a stronger hold on what women (and especially women of color) could and could not do. Through her we see how the future has changed, granted, not always it was for the better, but we always had her perspective there to make us ponder.

So, it was a true experience to finally see her get her own happiness, which is what she deserves. To be honest, I have a feeling that Legends of Tomorrow is going to pull a “That’s How It Went All Along” with Nate being the father of her children and grandfather to one Mari McCabe. It wouldn’t make the timeline unstable, but rather solidify it. Plus, they’re so unbelievably in love with each other that, while I don’t particularly care about the CW’s tendency to “Pair The Available Straights”, this one couple has worked pretty great with their slowish-burn.

Sara is the other someone who had a breakthrough and development as a character. Some viewers may think “Wow, are we ever gonna stop having Sara be sad about Laurel?” and, honestly, I don’t think so. I don’t even want to. I believe that, as grieving goes, a part of Sara will always be broken after losing Laurel (hell, a part of the DCTV will be always be broken, too). The difference now is that, allied with the Alternate Reality she went through during the Invasion Crossover, she may finally get some inner peace and accept that some things can’t be changed. Laurel wouldn’t want those changes to if it takes a toll on Sara. It’s such a perfect example of a healthy sibling relationship, and I am always in need of more.

As far as the cliffhanger goes, I would say that what we got wasn’t the *best thing ever*, but I do see potential. I’m much more curious if it will work as a parallel to Flashpoint, meaning that it can’t be changed and may influence the other shows from Earth-1. I sincerely hope the changes aren’t random, like Baby Sara becoming Baby Connor, because that’s just stupid. Now, if Amaya stays on the team and new members are added, as the showrunners seem to be promising, I’m on board for a new exciting season of Legends. Is the show gonna fall into what some fans call “The Third Year Slump”? We’ll have to see. But, we ought to have some faith that they will come up new and inventive ways for the stakes to be increased while delivering absurd and yet highly entertaining high-octane TV.