This pains me to write. General Leia Organa is one of my favorite characters. She’s funny, she’s commanding, she uses her work as an excuse to avoid having emotionally significant conversations…what more could anyone want?

But the thing is, everything I love about her characterization is only in evidence in The Empire Strikes Back. And it’s really only due to an interpretation of her relationship with Han to which not many people subcribe. In the other films, she’s just…off. And throw out The Return of the Jedi, as far as I’m concerned (what a shock; it was the one Lucas was the most involved in). A New Hope made an earnest effort, to be fair. In it, Leia was quite authoritative—even haughty—and had a clear commitment to the Rebel Alliance. However, there were two issues, neither of which were particularly small.

The first is that she was inadvertently made to look like an idiot. It’s difficult to blame her for her capture at the beginning of the film since we don’t know the circumstances surrounding it, but there’s no denying that girl spends most of her time locked up. Once she’s out, there’s the one moment where she makes everyone go into a trash compactor, and they almost die. This one gets a bit of a pass, since you could make the argument that they would have died had they stayed in the hallway. However, post-escape, she also instructs Han to fly them right to the rebel base, despite outright saying that she knows they were tracked. Now, it’s not as if Luke exactly came across as a genius with his comments about bullseye-ing womprats, so it’s somewhat mitigated. Not to mention her snarky rejoinders and the way she’s able to command respect in every scene can allow viewers to sort of overlook this.

The issue, however, is that Leia is outright tortured, her entire planet blows up, and yet her trauma goes entirely unaddressed. In fact, the one scene where this *might* have been broached is instead spent with her comforting Luke because Ben, who he barely knew, just died. That’s sad, yes, but we’re talking about her entire planet. Are we supposed to think she doesn’t care? That it’s too painful to talk about? That the needs of Luke’s hero-journey are that much more important?

It’s actually the uncomfortable way with which this was written that gave rise to the alternate (what I consider the “right”) interpretation of Han and Leia’s dynamic.

Julia described this beautifully already, but the long and short is that Han is not the one with commitment issues—Leia is. That’s why he hung around for the *three years* in between Episode IV and V, never bothering to pay back Jabba, and pulling the “okay I’m really gone this time!” card, which we see kick-starting their fight in the film’s opening. That’s why she runs away after they kiss inside the astroid. And that’s really why his response to her “I love you” was “I know”; it’s not because he’s a douche-canoe, it’s because she’s been emotionally distancing herself (“you’re imagining things”) and it’s been hurting him. “I know” is actually a very sweet, touching moment.

This reading of their relationship makes complete sense with the unaddressed trauma; of course Leia is closed off! But then if we go with the more popular take-away, that Han is a flight-risk renegade and The Empire Strikes Back is all about him choosing to commit to the rebellion, we’re left with a Leia who lost her entire planet, and then spends a movie trying to hook up with an indecisive “scoundrel” whose parting words to her amount to an egotistical jab.

Which would you rather?

To J.J. Abrams’s credit, it seems like he opted for the former reading, which is why The Force Awakens had multiple moments where it was clear Leia was the one pushing Han away at all times:

Han’s comment to Leia later about how he left “so you’d miss me” is even more tragic in this context. It does require a little bit of a loose constructionism with some of Leia’s lines, like “I just never should had sent [Kylo] away, that’s when I lost him. That’s when I lost you both”, since it evokes a bit of Han-the-flight-risk-scoundrel, but it’s nothing egregious.

Abrams also did us a favor and made Leia a general who took on a lot of responsibility, and who blamed herself when things went wrong, particularly in the case of Luke’s disappearance.

However, the biggest issue is that the movie did not commit to this characterization. It’s hard to tell if it was the result of Carrie Fisher’s acting not being up-to-snuff for what would have been required, or if it was because the focus needed to be on Han and Kylo’s relationship, but there was something very off about her sadly hugging Han, resigning herself to his terrible plan, without so much of a second word. Even worse, there’s the moment when Han tells Leia “There’s too much Vader in [Kylo]”, basically blaming her genes for him turning to the dark side, Leia tacitly agrees.

“That’s why I wanted him to be trained with Luke.”

Leia, that was really dickish of him to say, especially since everything that happened with your son is also cited as the reason your relationship didn’t work out. You’re just going to let him blame your DNA for that? What happened to the days of challenging him?

And while we see her react to Han’s death for about three seconds, the rest of her screentime is spent…wearing a political wife outfit and dishing out random hugs? Look, I’d want to hug Rey too, but this is hardly an effort to incorporate Leia’s point of view. 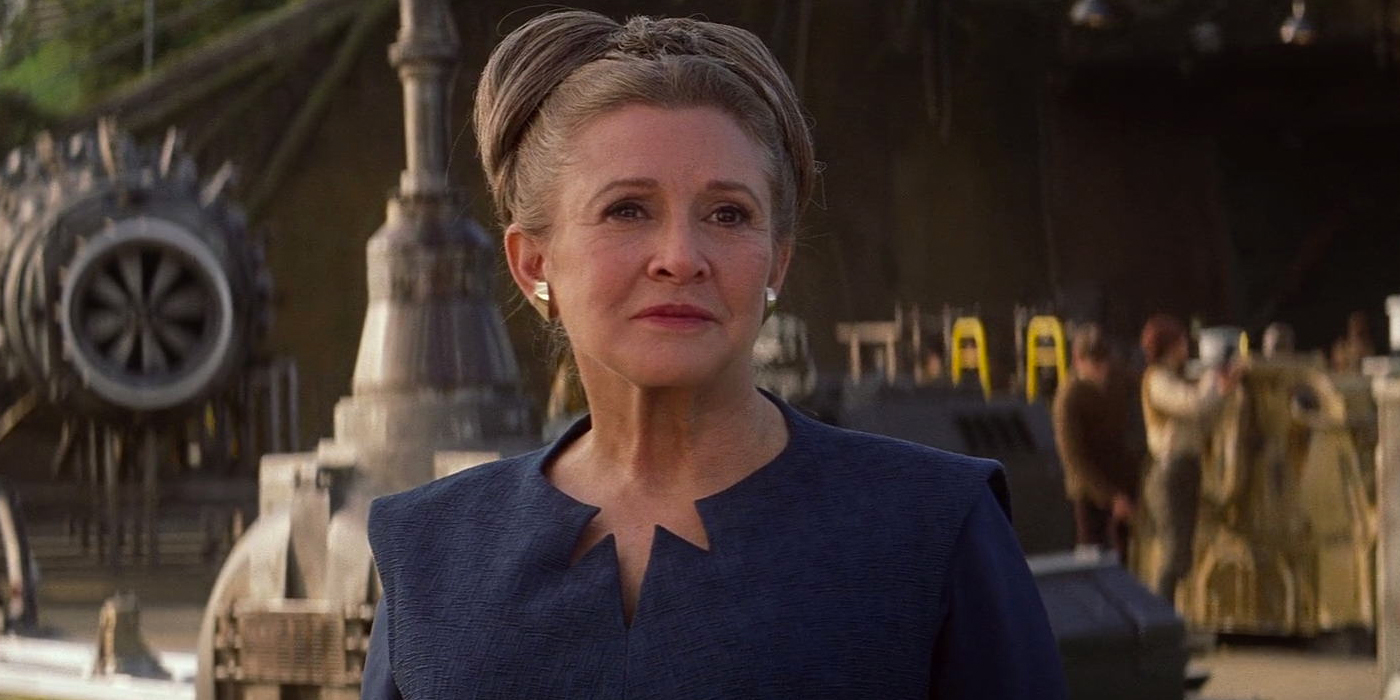 Still, The Force Awakens tried with her, even if it came up a bit short. The Return of the Jedi, on the other hand, didn’t seem to try at all.

The infamous bikini-outfit is the tip of the iceberg, really. Though at least Carrie Fisher is not shy about sharing her thoughts on that matter when advising Daisy Ridley:

“You should fight for your outfit. Don’t be a slave like I was.”

Yes, the off-screen implications of what happened with Jabba are not flattering. And the fact that this was consumed as entertainment is quite unfortunate. But at least on a Watsonian level, it can be treated as something unfortunate that happened in the continuing misfortune that is Leia’s life. Plus, she was the one who killed Jabba, so Women on Top!

What makes no sense, on any level, is the way that Leia had absolutely no reaction to finding out that Darth Vader was her father. This was the guy that tortured her, and she was mildly sad for a few seconds. Then she waved as Luke ran off, without offering to go with him (bye-bye sense of responsibility that had been present before).

Heck, even her role within the Rebel Alliance was nerfed. Han was given a promotion and about to lead a crucial mission and she had no idea? If she hadn’t volunteered to go in that case, would she have had any formal job duties at all?

It was clear that there was very little thought put into her characterization in Episode VI, and the fact that Lucas took the “I love you”/“I know” exchange, flipped it, and shoved it in randomly is rather case-in-point.

This doesn’t mean that I don’t still love Leia, of course, or that she’s a worthless character. However, she’s a character who was only given narrative space to tell her own tale in one movie out of four. Well, one and a half, if we’re being generous to The Force Awakens. And far be it for me to cry “sexism”, but particularly in the case of the original trilogy whereshe was the only major female character, for there to be no effort to consider her point of view is rather unforgivable.

At least there was one movie that got her. And it got her so well, that I will continue to champion Leia Organa, despite knowing her scripting is a hot mess of wasted potential.

Images courtesy of Lucasfilm and Disney

In this article:Leia Organa, Star Wars