Well folks, I’m not quite sure how it happened, but it’s late April again. Which means Game of Thrones season. And whether you are an unabashed book snob like many of us, or the disinterested spouse of a casual viewer, for the next two and a half months, you are not going to be able visit any social media site, or attend a company potluck, or read the NY Times without some aspect of this show bombarding you. “Can you believe who they killed off?!” Yes, yes I can, Debbie, because nearly every Shocking™ moment on this show is completely unmotivated.

It’s for this reason the “if you don’t like it, don’t watch it” argument is ridiculously unhelpful. Do people think it never…actually…occurred to us? This damn thing is inescapable. Especially in “nerdy” spaces.

^Just like ‘Orange is the New Black’ is required viewing for Official Lesbians™, GoT must be consumed by every geek.

Then there’s also the fact that GoT is a rather absurdly sexist show. Actually, it covers most “isms” and “obias”: sexism, racism, homophobia, whorephobia, ageism, ableism… Depending on if Alleras makes it into the show (I doubt it), we might be treated to some transphobia too! And please don’t make me point out how “but it’s like this in the books!” is not a suitable defense. The books are irrelevant to any discussion about the show at this point. Showrunners David Benioff and Dan Weiss (D&D) have even said as much:

“People are talking about whether the books are going to be spoiled – and it’s really not true,” Benioff told EW. “So much of what we’re doing diverges from the books at this point. And while there are certain key elements that will be the same, we’re not going to talk so much about that – and I don’t think George is either. People are going to be very surprised when they read the books after the show. They’re quite divergent in so many respects for the remainder of the show.”

But no, seriously, the sexism especially…it’s almost this show’s defining feature. However, for reasons yet to be explained to me, there is just no acknowledgement of this by media critics. Okay, The Mary Sue famously boycotted GoT, and for a hot minute it seemed like there was a conversation, but…nope. The show continues to be a media darling, and it is showered in awards simply for existing. I think it’s because there’s enough historical-ish-feeling things about it that people find the offensive aspects are somehow mitigated by the fact that things were sexist “back then”?

But the issue is with D&D’s actual scripting of characters more than the setting. Not to mention the fact that their setting includes a magically disappearing patriarchy, because there’s no internal consistency, no commitment to exploring this setting, and basically no understanding about what in seven hells Martin is even going for in his books. Sansa gets slapped around by the plot in a “dramatically satisfying” “gothic horror” after agreeing to marry her enemies for revenge? Time-traveling unchaperoned field nurses marry kings? Yes, what a commitment to realism.

Even if we look past the blatantly offensive aspects, we’re left with inconsistently written characters who behave in mystifying ways (often complete with complete about-faces) on poorly-lit sets to ends that are becoming impossible to care about. Why did Carol Lannister arm the Faith last season? No, really, because the only thing she knew it would accomplish was that it’d get Loras arrested. Yet she summoned Batfinger “urgently” before that. So is she a soothsayer now, and foresaw the perjury trap? Why did Batfinger help her out and then chuck her under the bus one scene later? Why did the High Sparrow want to set a perjury trap for Marg at all? Why was Olenna willing to “go down” to punk Carol, but not to get her grandchildren (and the future of Highgarden) freed from the sept? 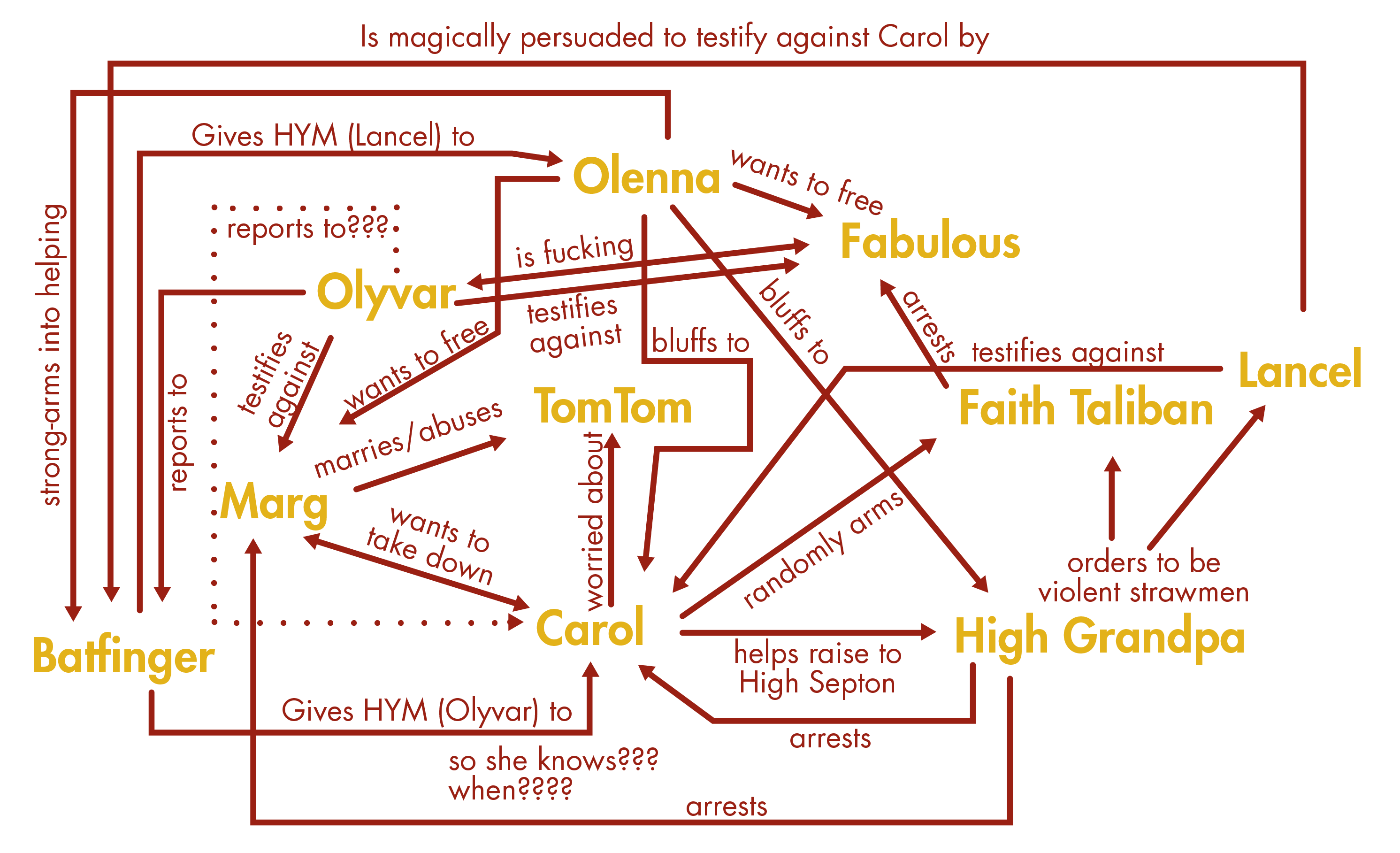 You know I can keep going!

This is one aspect of one plot. And it really only takes about two seconds of reflection to see how this level of illogic permeates the entire show. The Emperor is naked! Heck, The Emperor fully stripped at the end of Season 4 and at this point is just shaking his butt in our faces. It’s really not that hard to see.

So honestly, I’m done trying to psychoanalyze media critics. GoT is simply not facing the scrutiny it deserves, just by nature of being a show which we, thinking people, are supposed to watch. However given its cultural impact (mayhaps even going so far as influencing other media creators) and harmful messaging, it is a scrutiny that we here at Fandom Following think is particularly critical. Plus it’s kinda hard to “follow those fandoms” while ignoring one of the biggest ones.

Therefore, yes indeed, we shall be watching Season 6! In fact, each Sunday night as the show airs, we will be hosting a live chat on our site, so you can watch our descent right along with the show’s own declining quality. On Mondays, we will post the transcript of our chat, along with our quick reactions/highlights & lowlights. Also on Mondays, the wickedly talented Kate will be gracing us with some snarky recaps. We watch, so you don’t have to (●´ω｀●).

In addition, we plan to record 30-40 minute podcast each week, where we will get into a little more serious discussion; hopefully, those episodes will be in our feed on Wednesdays, but this may shift every now and then. Finally, as needed, there will be one or two longer metas each week, depending on what lovely developments/implications come out of each episode.

With everything we’re offering, we feel confident that we will get through this season in one piece.

However, it is also strongly recommended that you follow these steps, for a more pleasurable viewing experience:

1. In honor of our favorite Super Mom, Carol, we recommend uncorking that wine at least an hour before showtime. You are required to sing this as you do so.

2. We also recommend taking a break from electronic devices at this time as well. Trust us, your eyes will be straining plenty come 9pm EST, 6pm PST.

3. Mute your TV when the credits come on and play the Official Book snob Anthem instead. That way you can enjoy Ramin Djawadi’s music without feeling like you’re being sold a false product.

4. Look, we’re not saying that GoT is formulaic and predictable, except it totally is (ironically despite the random character 180°s). One fun way to make it through each episode, for that reason, is to have this BINGO board in front of you: Though spoiler, the really top-notch trailers actually revealed that at least four boxes will be checked off, with a potential for five if this counts as Snake-Fu:

Yeah…we’re thinking the brilliant tumblr user “atokenwhitemale” may have made our lives too easy. Only a true master of hacktacular writing can complete this extended BINGO board (by an awesome anonymous book snob): 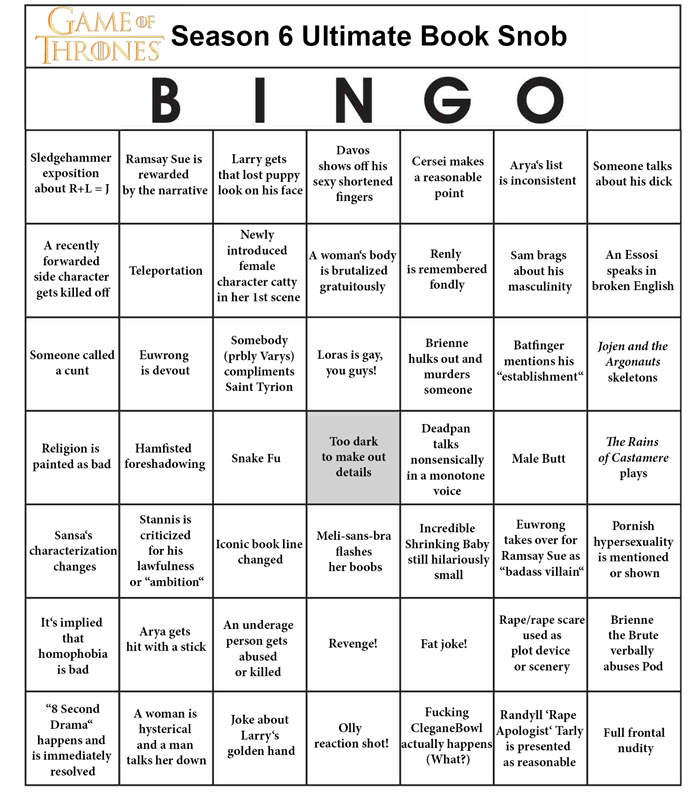 5. And finally: the memes. No seriously, we can promise that there will be something so nonsensical, or some sort of foreshadowing that is so ineptly done, or teleportation, or telepathy…that it is instantly going to be a classic, a la:

Instead of cringing at “bad pussy” dialogue, just think of the sweet, sweet memes that will come out of it. It makes the whole thing oddly tolerable.

But most importantly, we’ll be with you every Sunday night, probably following all 5 of these steps ourselves. Come hangout with us and together, we will defeat the evil.

In this article:book snobbery, Game of Thrones, got season 6