Welcome back everyone! We’re at the house of Tom Bombadil this week. I hope that you’re reading this with a cup of tea and a table full of food while a gentle rain storm rolls by outside. If you really want to get into the spirit of things, please feel free to slap a melody onto any part of this review and sing along.

Not much “happens” this chapter, in terms of moving the plot forward – the hobbits just get a well-deserved breather from danger after nearly drowning or being eaten by an angry willow tree. But the odd, fairy-tale-esque atmosphere continues from “The Old Forest,” and there are a lot of interesting things to think about if we take a step back from the main narrative and look at Tolkien and Middle Earth as a whole.

Who is Tom Bombadil?

I have spent too much, dear god, too much time a lot of nice time reading about Tom Bombadil this week. In some ways, this is probably a silly thing to do. His identity doesn’t matter to the narrative of The Lord of the Rings. Tolkien has said that he left Bombadil’s identity, and larger place in Middle Earth, as an intentional enigma. He’s an older character, left over from children’s stories and a handful of poems that Tolkien made up when he was younger. So it’s a perfectly reasonable path to just shrug your shoulders at Tom and go about your business. But I don’t see the fun in being a fan that doesn’t overanalyze everything – and this is Tolkien we’re talking about, who took the time to change the feather in Tom’s hat from a peacock’s to a swan’s because it better fit the ecosystem of Middle Earth – so let’s do this.

“Don’t you know my name yet? That’s the only answer. Tell me, who are you, alone, yourself, and nameless? But you are young and I am old. Eldest, that is what I am. Mark my words, my friends: Tom was here before the river and the trees; Tom remembers the first raindrop and the first acorn. He made paths before the Big People, he saw the little People arriving. He was here before the Kings and the graves and the Barrow-wights. When the Elves passed westward, Tom was here already, before the seas were bent. He knew the dark under the stars when it was fearless.”

“Who is Tom Bombadil?”
“He is,” said Goldberry, staying her swift movements and smiling.
Frodo looked at her questioningly. “He is, as you have seen him,” she said in answer to his look. “He is the Master of wood, water, and hill.”
“Then all this strange land belongs to him?”
“No indeed,” she answered, and her smile faded. “That would indeed be a burden… The trees and the grasses and all things growing or living in the land belong each to themselves. Tom Bombadil is the Master.”

All of this is just words, of course, but Tom seems to back them up when he slips on The Ring without disappearing and then manages to make it disappear (or, at least, care about it little enough to pull off some pretty laudable sleight of hand).

He’s a weird character: his actions with the Ring seem to suggest he’s far more powerful than anyone else in the story, but he spends his time bouncing around the Old Forest and, as far as we know, doesn’t seem to much bother with anything beyond it. He claims to be the Eldest, a very bold claim in the very long history of Middle Earth. He is master of everything but nothing belongs to him. Goldberry answers the question of who he is by just saying “he is,” a statement with very strong religious overtones to anyone raised or practicing as a Christian.

I would love to hear everyone’s thoughts on what’s up with Bombadil. When I first read The Lord of the Rings when I was younger I thought of him (and of Goldberry) as a sort of nebulous nature spirit. I know there are theories that the two of them are Valar, comparable to angels or demigods in Tolkien’s mythology. It’s an attractive theory since Goldberry is described as pretty much the spitting image of Yavanna and since it’s one of the only ways to really satisfactorily say that Bombadil is the “eldest.” Others claim that that’s a bit of a stretch, given Bombadil’s powers, and suggest instead that he’s in the class of the Maia (situating him alongside Gandalf, Saruman, and Sauron). None of these are terribly satisfactory as explanations, to be honest, and require a good bit of mental gymnastics to really make them work.

My favorite theory that I came upon this week is a bit out there, but really wonderful and imaginative, so I thought I’d share it. In a very long series of blog posts that can be found here, it’s suggested that Tom Bombadil is a sort of spirit or manifestation of the Music of the Ainur (for those who aren’t Silmarillion nerds, this is pretty much Tolkien’s creation story: the earth was sung into existence by the Valar mentioned above, and evil came into the world through the Bad-Guy-Valar Melkor inserting his own ideas into the song). In this sense, Bombadil is all that was good about the Earth before it was corrupted, and he is capable of “fixing” evils like Old Man Willow through his song. It’s a really wonderful essay with so many great points – if you have the time you should absolutely read it. It made me go from being pretty indifferent about Bombadil to thinking he’s a really fascinating character, and it makes all kinds of wonderful points about Tolkien’s ability to weave the grand scheme of history into the text of smaller stories. (Quick preview: it’s argued that if Bombadil is the spirit of the music of the Ainur, then Ungoliant, Shelob’s spider mom and another Middle Earth anomaly, is the spirit of Melkor’s deviation). 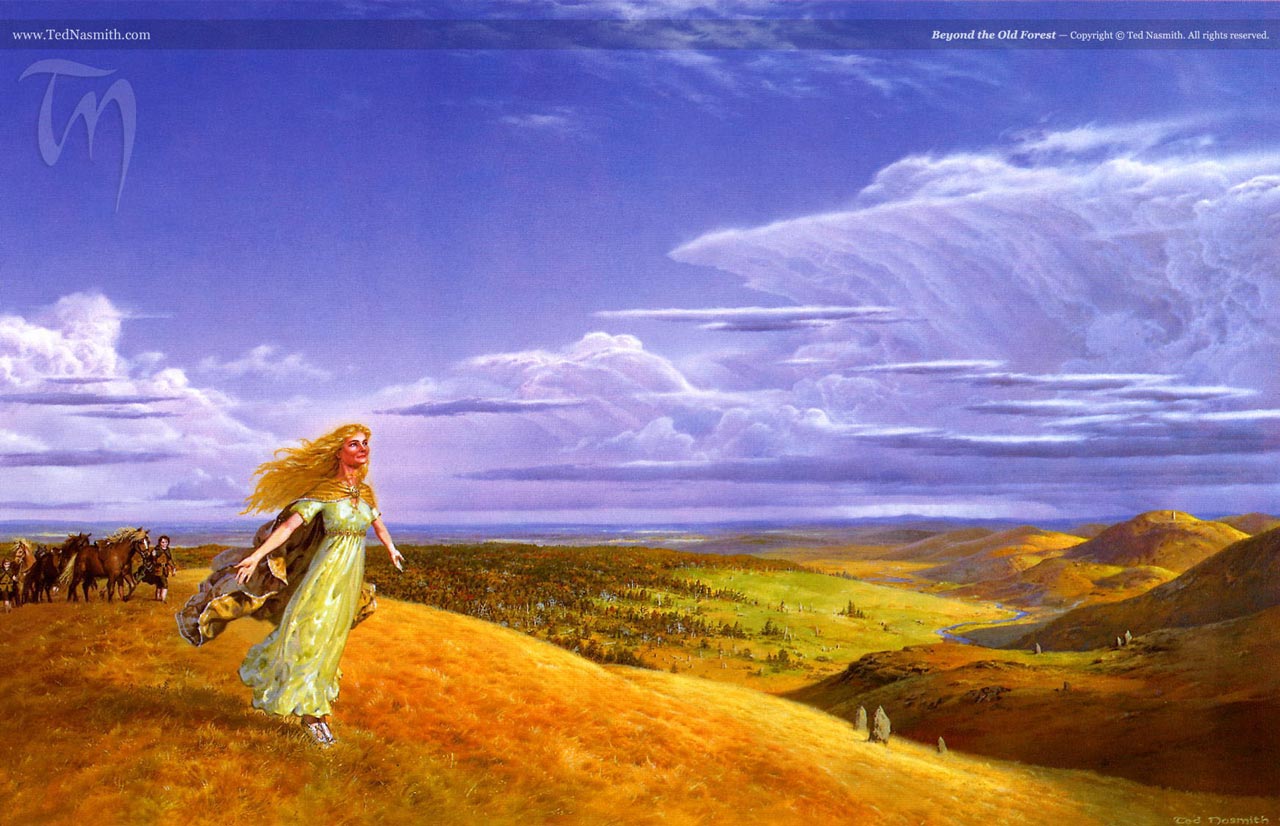 He told them tales of bees and flowers, the ways of trees, and the strange creatures of the Forest, about evil things and good things, things friendly and things unfriendly, cruel things and kind things, and secrets hidden under brambles. As they listened, they began to understand the lives of the Forest, apart from themselves.

I really enjoyed how Tolkien dealt with nature throughout this chapter. It, again, carries over from “The Old Forest” in its depiction of nature as beautiful but also somewhat terrifying. There is a continuing tension throughout the chapter between tamed and untamed, beauty and danger. Look at all the binaries set up in the quote above: Tolkien’s nature is cruel and it is kind; above all it’s different. That’s not something that I know a lot about, but I get the impression it’s a very pre-industrial view of nature. It’s not something to be tamed, or something to be admired like a pretty adornment set up neatly on the edge of town. It is its own thing, separate and frightening, and deserving of respect. This is Tom’s take on the trees of the Old Forest, which he knows intimately well:

Tom’s words laid bare the hearts of trees and their thoughts, which were often dark and strange, and filled with a hatred of things that go free upon the earth, gnawing, biting, breaking, hacking, burning: destroyers and usurpers… The countless years had filled them with pride and rooted wisdom, and with malice.

Yikes. But at the same time, the chapter is also rather calm and beautiful. Tom gathers water lillies for Goldberry. The rain is described as gentle, as a washing day. When Frodo looks out his westward window, and ominous mist over the forest is countered by the bright red flowers bursting off of bean plants.

They heard of the Great Barrows, and the green mounds, and the stone-rings upon the hills and the hollows among the hills. Sheep were bleating in flocks. Green walls and white walls rose. There were fortresses of the heights. Kings of little kingdoms fought together, and the young Sun shone like fire on the red metal of their new and greedy swords. There was victory and defeat; and towers fell, fortresses were burned, and flames went up to the sky. Gold was piled on biers of dead kings and queens; and mounds covered them, and the stone doors were shut; and the grass grew over all…. A shadow came out of dark places far away, and the bones were stirred in the mounds. Barrow-wights walked in the hollow places with a clink of rings on cold fingers, and gold chains in the wind. Stone rings grinned out of the ground like broken teeth.

Isn’t that great? I hadn’t remembered this passage at all, but it’s one of my favorite that I’ve encountered in this re-read so far. It’s such a fascinating passage, somber and dynamic. I’m really intrigued by the narrative shift that happens starting with “Sheep were bleating in flocks.” I don’t know the literary term for it, but I love how the focus shifts from the hobbits hearing the story, to the story simply happening. It’s a compelling mix of a distant, historical view mixed with such specific, tangible facts: thousands of years of history are speeding by in a few sentences, and we experience it through the red glint of the sun on a sword, the “clink of rings on cold fingers,” and stone rings as broken teeth. It is wonderful writing.

I also like the sense of momentum and movement in Tom and Goldberry’s story-telling. Goldberry’s songs are said to start in the hills and then fall “softly down into silence.” Listening to Tom’s stories are even more forceful, and the hobbits seem to almost be literally travelling through them. It’s a sensation only strengthened by the fact that once the story stops, they have no idea how much time has passed:

When they caught his words again they found that he had now wandered into strange regions beyond their memory and beyond their waking thought, into times when the world was wider, and the seas flowed straight to the western Shore; and still on and back Tom went singing out into ancient starlight, when only the Elf-sires were awake. Then suddenly he stopped, and they saw that he nodded as if he was falling asleep. The hobbits sat still before him, enchanted; and it seemed as if, under the spell of his words, the wind had gone, and the clouds had dried up, and the day had been withdrawn, and darkness had come from East and West, and all the sky was filled with the light of white stars.

See you in two weeks for “Fog on the Barrow-Downs!”

In this article:Lord of the Rings, lotr reread, Tom Bombadil