“The world looked wild and wide from Weathertop.”

The tower of Amon Sûl was built upon Weathertop centuries before the events of “A Knife in the Dark.” Strider recounts this history as the hill first comes into the view of the hobbits: “It was burned and broken, and nothing remains of it now but a tumbled ring, like a rough crown of the old hill’s head. Yet once it was tall and fair. It is told that Elendil stood there watching for the coming of Gil-galad out of the West, in the days of the Last Alliance.”

Amon Sûl was built to hold one of the palatiri, the greatest of those held by Elendil and his men, and it stood at the heart of their kingdom in Arnor. It was a center point, far-seeing and strong. But by the Third Age, the previously-unified Arnor had fallen into three disputing kingdoms, with Amon Sûl stuck on a disputed border. It was subject to repeated infighting and eventually it fell to a host led by the Witch-King of Angmar (the chief of the Ringwraiths) and was left in ruins.

It’s a tale that stands in the background of “A Knife in the Dark.” Like so much of Tolkien, little trickles of legend hint at a surging river of story underneath. Despite this, Weathertop stands as the physical center of the chapter. It works as the emotional and thematic center as well: this is a chapter of promising beginnings that slowly slide into ruin, of stories and tales and messages that stand as an unsteady bulwark against an evil that is becoming harder and harder to evade. It’s one of the best chapters so far in The Fellowship of the Ring, and also one of the darkest.

In the last couple of chapters, we’ve talked about reversals of expectation. The Barrow Downs go from cheerful to horrific, Bree goes from cosmopolitan to provincial, Strider shifts from devious stranger to trusted leader. Appearances, as we’ve said, are a tricky business in Middle-earth.

This gets ratcheted up to eleven in “A Knife in the Dark.” The chapter is full of mirrored images, counterpoints, and reversed trajectories. The clearest one can be seen in the opening and closing of the chapter, in the two Black Rider attacks. In the first – an effective horror scene in its own right, more in the final comments section – Fatty Bolger gets his moment of bravery by wisely fleeing the scene and sounding the alarm. In the second, Strider and the hobbits stay put rather than fleeing. And though the Riders are sent on their way by a fire-wielding Strider, the damage has been done: Frodo is stabbed by the Witch-King of Angmar (whose troops had destroyed Amon Sûl long ago).

It happens in quieter ways as well throughout “A Knife in the Dark.” When the hobbits head off into the wilderness with Strider, it’s portrayed as one of their favorite parts of the journey. In part it’s played off on the weather – sunny and warm, but not too warm, a perfect fall day. But it’s easy to see that it’s largely attributable to the fact that the hobbits aren’t in charge any more. Rather than hoping for the best and forging a trail on their own, they can sit back and allow Strider to zig-zag back and forth through the countryside in trails they would never have been able to follow themselves. But as the chapter goes on, this becomes less and less reassuring.

Strider’s omnipotence drops off rapidly as the proto-fellowship approaches Weathertop. He seems just as keen to find Gandalf as the hobbits had been, and the sense of protection and safety slides away. Both Sam and Frodo notice the change. Sam declares that Strider’s methods and demeanor make him feel “uncomfortable and lonesome.” It’s even worse for Frodo. Despite having narrowly averted death on a couple of recent occasions, Weathertop marks his emotional low point in the story so far: “In that lonely place Frodo for the first time fully realized his homelessness and danger. He wished bitterly that his fortune had left him in the quiet and beloved Shire. He stared down at the hateful Road, leading back westward – to his home.”

It’s a trend that even works on the micro-scale: take Sam’s recitation of Bilbo’s poem about Gil-galad.

Gil-galad was an Elven-king
Of him the harpers sadly sing:
the last whose realm was fair and free
between the Mountains and the Sea.

His sword was long, his lance was keen
his shining helm afar was seen;
the countless stars of heaven’s field
were mirrored in his silver shield.

But long ago he rode away,
and where he dwelleth none can say;
for into darkness fell his star
in Mordor where the shadows are.

There’s a sense of loss in the poem – stars mirrored in his shield, only to fall into darkness – that permeates the chapter. Certainties fade into uncertainties, victories slip into defeats. There is a sense of sliding further towards darkness in this chapter. And it’s interesting to me that this sense occurs in a chapter that, more than anything since “The Shadow of the Past,” deals with the deep history of Middle Earth, and the centrality of stories about the past. “As night fell and the light of the fire began to shine out brightly, he began to tell them tales to keep their minds from fear.”

Things are not looking great for the hobbits on Weathertop. They find burned grass and blackened stones, some trace evidence of Gandalf’s presence, and a group of Black Riders in the distance on the road. It’s a good example of how Tolkien diverges from other more contemporary fantasy stories. There’s no attempt to hide or to set a trap. There’s no talk of tactics or defense. Strider and the hobbits just sit down by the fire and start to tell each other stories.

Before they start, it’s an emotional low-point. We already noted Frodo’s new awareness of his position. But it’s a disheartening night for everyone. The hobbits are described as cold, wrapped in every blanket they have. They’re hungry, and fearful that food will only become more scarce. They’re in danger in a desolate land, with strange birds and beasts and no people. It’s an awful moment: imagine the low point of a family camping trip, paired with the knowledge that you don’t get to go home and someone’s trying to murder you.

But as it gets darker, Strider starts to tell stories. It’s immediately established that these stories are not simply about passing the time, or distracting the hobbits. When Frodo begins to tell the tale of Gil-galad and the Last Alliance, Strider immediately cuts him off: “I do not think that tale should be told now with the servants of the Enemy at hand.” These stories have weight. The content of them matters. So instead, Strider decides to tell them a (shortened) version of the Lay of Beren and Luthien.

This section is a great example of how Tolkien works on so many levels. For people more versed in Tolkien’s works it’s a reference to one of his greatest stories (and nicely seeds Aragorn’s own emotional journey, since his relationship with Arwen parallels their human/elf forebearers). But I think it works as a story-within-a-story even for those readers who have never picked up another work by Tolkien before. Partly this is because the song is one of Tolkien’s best poetic works, a rhythmic chant full of movement and light. Yet even Strider’s summary of the story works. It’s filled with a wealth of details: in the span of a page there are references to ann-thennath (an obscure Elven verse form), Thingol, Angband, Simarils, Barahir, Neldoreth, Esgalduin, Dior, Elwing, Earendil, Numenor, and Westernesse. From one perspective, this is nonsense to a reader – a bunch of meaningless references, a bunch of strange and foreign places. But when we keep in mind that, in all likelihood, the hobbits themselves likely have no clear idea about what any of these things are either, the story takes on a very different light.

The understanding of the details doesn’t matter here. It doesn’t matter if the reader (or the hobbits) have no idea what any of those proper names mean, or what their context entails. But what does matter is that it takes all the things that are frightening about Weathertop – its vastness, its danger, its unknown qualities – and repositions them. The world was “wild and wide” from Weathertop, qualities that first point to danger.

But the story of Beren and Luthien makes the same point. The world is wild, wide, filled with unknown dangers and peoples and places, filled with a vastness that the hobbits can’t see or comprehend. But while that vastness can produce danger, it is also the core of the Middle-earth’s beauty. Even without knowing their meaning, there is a sense of safety in all of the names that Aragorn utters. They are unknown here, but they serve to make tangible a story of immediately recognizable emotional resonance: of love, sacrifice, and loyalty. It’s another inversion in a chapter full of them. The wideness of the world is the root of its fearsomeness and its beauty. Stories connect them. 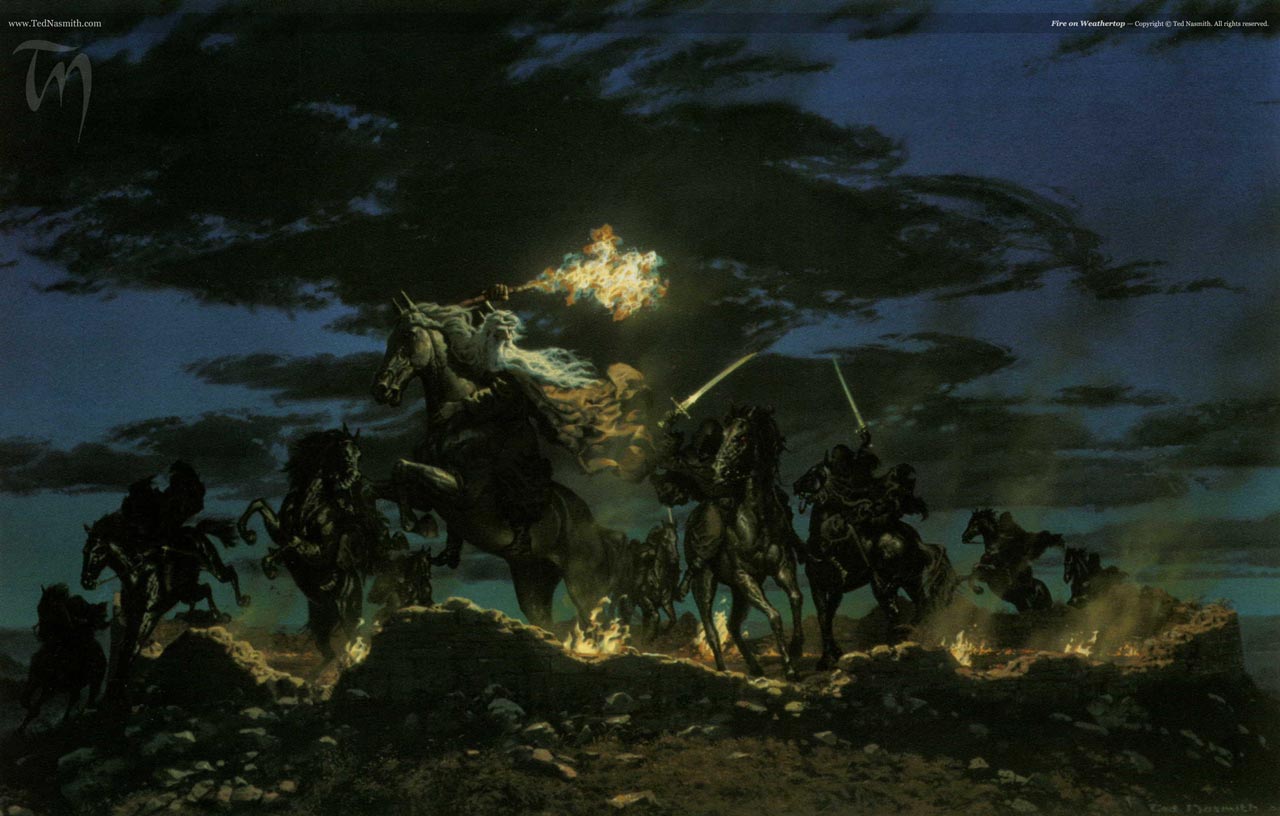