“But it is not your Shire,” said Gildor. “Others dwelt here before hobbits were; and others will dwell here again when hobbits are no more. The wide world is all about you: you can fence yourself in, but you cannot forever fence it out.”

Last month, I found myself picking up my keys and getting ready to drive back to St. Louis after having spent a few weeks visiting my parents in New Jersey. Nothing too unusual: I had stayed for Christmas, visited a couple of old friends, and was getting ready to head back west. But as I was about to walk out the door, I remembered that this time something was different. My parents would be moving in a few months, and this was most likely going to be the last time I was inside the house in which I grew up. I’m not an overly sentimental person I name all of my plants and feel guilty if I give more attention to one than another, so it’s probably no surprise that this seemed like an important moment to me: I felt a sudden need to go around and touch everything, look at everything so that I could remember it more clearly and carry it along with me.

This sense of homes, and leaving them, and the mix of emotions that brings, sits heavy on “Three is Company.” After two chapters of parties and portents, it’s a pretty quiet chapter, slow-moving, but not in a bad way. Frodo, Sam, and Pippin head out for Crickhollow, the first Black Rider shows up snuffling along the road, and we get our first glimpse at Sam’s beloved elves. “Three is Company” is wistful, filled with a sense of things lost, potential things to come, and a creeping sense of danger along the margins.

“Bag End seemed a more desirable residence than it had for years, and he wanted to savor as much as he could his last summer in the Shire. When autumn came, he knew that part at least of his heart would think more kindly of journeying, as it always did in that season. He had indeed privately made up his mind to leave on his fiftieth birthday: Bilbo’s one-hundred and twenty-eighth. It seemed somehow the proper day on which to set out and follow him.”

The thing that I really love about “Three is Company” is that that it has such a beautiful little emotional and thematic arc that sort of shimmers at the edge of the chapter. The above quote is as close as Frodo comes to straight up saying that he doesn’t want to leave: that he is afraid, that he’s realized how much he’ll miss his home, or that everything around him has taken on that late-summer, golden-glow of nostalgia. It comes right at the start of the chapter. But the rest of the chapter is filled with the same ideas, and their evolution as Frodo and his companions move through the landscape of the Shire: the lingering, the reaching of new borders, the wild mix of danger and beauty that any adventure brings, and then, in the end, the beginnings of a revaluation of what exactly “home” was to begin with.

Frodo’s hesitancy to leave is understandable – he has to hand over Bag End to Lobelia, and more to the point, Gandalf has still not arrived. This reason for delay, while a good one, also feels a bit like an excuse for Frodo, the rational event that justifies all of his other, less explicit, feelings about leaving home. He takes forever to get going, and it’s a heavy emotional weight for him. When he finally does force himself to go – after one last dinner with friends – he views Bag End with a familiar sense of loss, the kind of quiet sadness that makes your heart hurt: “The sun went down. Bag End seemed sad and gloomy and disheveled. Frodo wandered around the familiar rooms, and saw the light of the sunset fade on the walls, and shadows creep out of the corners. It grew slowly dark indoors.” This hesitancy to leave, and the sort of wistful sadness that accompanies it, is mirrored later in the chapter when Frodo & Co. meet the Elves, who are heading West to sail over the Sea. Both of them have objectives to fulfil (though in opposite directions), but both are tarrying in more familiar lands before heading off into the unknown.

Once Frodo finally makes his break with Bag End, there is an immediate mix of beauty and danger. The danger is obvious – Frodo hears his first Black Rider literally as soon as he walks out of his door, though he doesn’t yet know what it is. They meet him twice more over the course of the chapter, the sense of foreboding growing stronger each time. But paired with this danger is a sense of wild beauty, particularly to be found in the landscape of the Shire. This is Tolkien at his most Tolkien-y, describing tree and rolling hills as only he can: “As they began to climb its first slopes they looked back and saw the lamps in Hobbiton far off twinkling in the gentle valley of the Water. Soon it disappeared in the folds of the darkened land, and was followed by Bywater beside its grey pool.” Tolkien’s landscapes always seem like they are suggesting some kind of deeper meaning, the idea that the beauty found in a tree or a vista of rolling hills points to something bigger beyond them. I think it was spiritual for Tolkien, but regardless of your own beliefs, there is something very beautiful and comforting in these passages.

Because of this, it’s fitting that Sam, as soon as he sees an unfamiliar landscape, asks if Elves live in the woods. It’s the assumption that something so different and so beautiful must contain something different and beautiful like the Elves. And he’s right! Frodo, Sam, and Pippin meet Gildor and his band of high Elves at the end of the chapter, and this feels like a very important moment. They arrive just in time to scare off a Black Rider about to sniff out Frodo, acting as a counterbalance to danger on Frodo’s journey. But just as importantly, at the very end of the chapter, they put a bookend onto Frodo’s nostalgia for his home. Much as he misses it, much as if he feels he’s sacrificing his safety and perhaps his happiness by leaving it, Gildor points out that it’s much more complicated than that. “It is not your Shire,” he says. “Others dwelt here before hobbits were; and others will dwell here again when hobbits are no more.” It’s an idea that puts the beginning of the chapter in a new light. Frodo didn’t have to leave Bag End, really: it had already left him.

And on that note, let’s talk about the Elves. 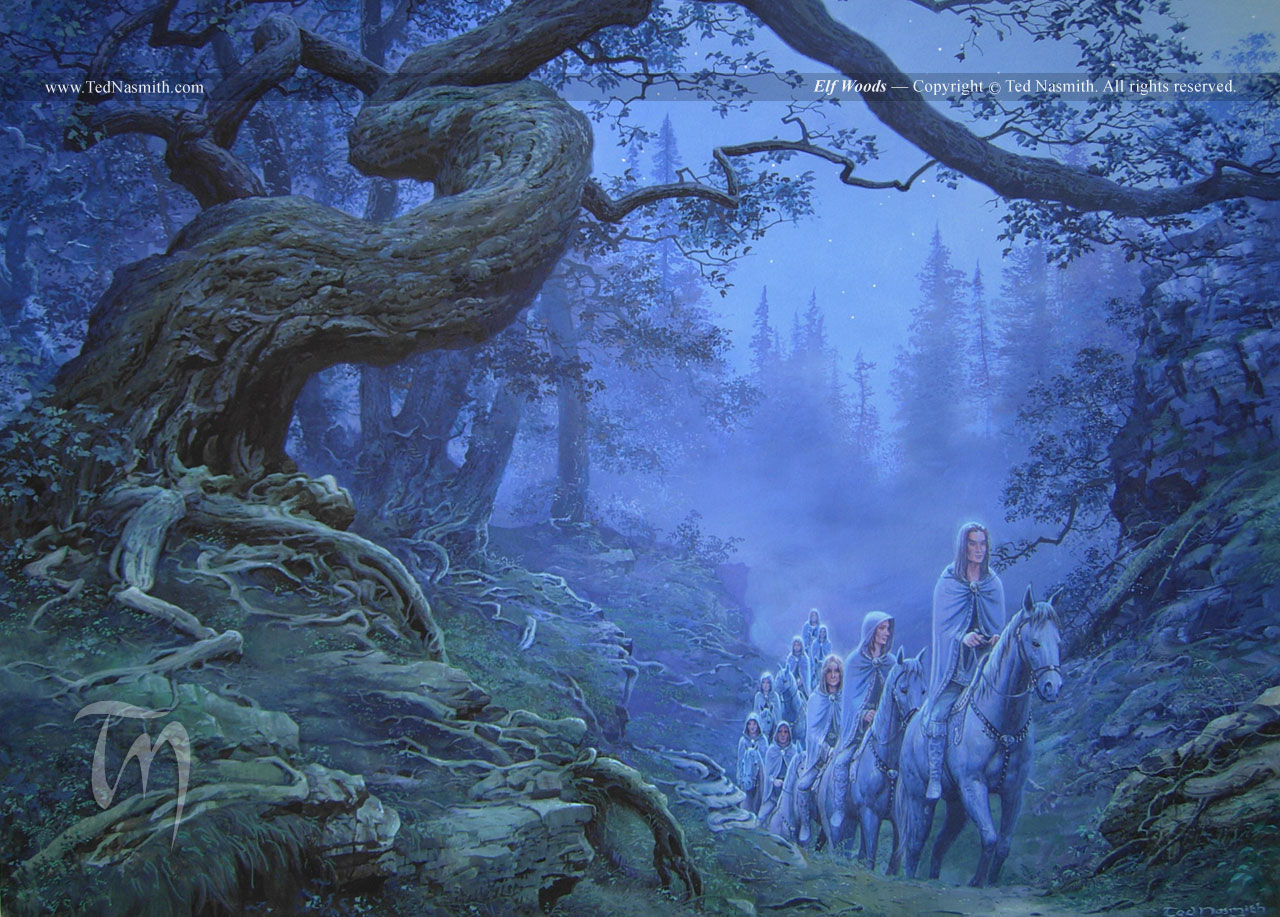 I was surprised by how thoroughly this chapter foreshadows “The Grey Havens,” the last chapter of The Return of the King (and, to a lesser extent, “The Scouring of the Shire”). Both deal heavily with conceptions of “home,” and threats to this conception. But even more specifically, they feature the same songs. In both, hobbits sing Bilbo’s old walking song:

Still round the corner there may wait
A new road or a secret gate,
And though we pass them by today,
Tomorrow we may come this way
And take the hidden paths that run
Towards the Moon or to the Sun.
Apple, thorn, and nut and slow
Let them go! Let them go!
Sand and stone and pool and dell!
Fare you well! Fare you well!

And in both, they are answered by Elves:

O Elbereth! Gilthoniel!
We still remember, we who dwell
In this far land beneath the trees
The starlight on the Western Seas.

This same call and response also occurs in the last pages of The Lord of the Rings, though in a slightly different form. I really like these songs here, and what they do in this chapter. They represent so well so many recurring ideas throughout the story. There’s the comfort of music – we’ll later see this particularly with Sam, but even here, songs literally drive danger away. There’s the sense of memory and nostalgia for a home, whether near or far. But there’s also a sense that even the choice to leave home and go on an adventure brings with it other things to miss: not only home itself, but all those other potential paths. Many adventures later, near the end of the story, Frodo will tell Sam that he cannot always feel torn in two. “Three is Company” is the earliest articulation of what that feels like, of aspiring for the beauty of a wide and wild world while also yearning to stay at home, to be safe and calm and happy.

I understand why Jackson’s movie adaptations cut most of the songs from The Lord of the Rings – it could have gone wrong very easily, and there’s only so much time – but I do think something important was lost with that choice.

See you in two weeks for “A Shortcut to Mushrooms!”