In response to Season 3 Episode 9, “Closure”

It’s probably not shocking to see an article that calls attention to Marvel’s Agents of SHIELD (AoS)’s issues. Afterall, this was a show with a slow start. But finally, in the third season, AoS has hit its stride; it has the action hero it both needs and deserves in Daisy, a full episode was devoted to the intimate exploration of Jemma’s experience and trauma on an entirely different planet (and she’s not magically “fixed” after that episode either; her recovery is still a major focus), Ward finally stopped bridging an awkward narrative space and became the fully fledged (and compelling) antagonist he was always meant to be, and there’s ambiguity at every turn with the new inhumans who can present real and clear dangers, while also offering real and clear protection.

I spent the first few episodes of the season patting myself on the back and going “ Constance Zimmer is Lash; this is soooo obvious,” only to scream in horror at the Andrew reveal. I truly had no idea what was going to happen when Fitz jumped into the portal in the second episode. And then there’s simply fun and engaging episodes, like “Many Heads, One Tale,” which shows Coulson’s team doing their mission thing, but presented with that exciting, Ocean’s Eleven vibe. The action is great, the effects are impressive for TV, the cast is diverse, and the characters are round.

So um. What the hell am I doing here? Well, unfortunately, your faves either die the cinnamon roll, or live long enough to become problematic. There were always things AoS did that rubbed me the wrong way. Nothing major; just here and there, a few lazy, sexist tropes (we’re all still trying to forget “Yes Men” right?). The overall pattern of the show has been okay, I would say. Sometimes I feel a little weird about how much character value is tied to fighting prowess, but then this year AoS went to excessive lengths to show how Jemma, the least “physical” and most traditionally “feminine” member of S.H.I.E.L.D., is one of the strongest that they have. And then Daisy’s struggle as an inhuman who is trying to understand both how she and other inhumans fit in the world, offers an incredibly unique and compelling narrative, which in no way focuses on her ability to make things go boom.

But…I’ll be honest; Tuesday’s episode was pretty darn sexist, basically from start to finish. I was incredibly drawn in while watching it, don’t get me wrong. I enjoyed it, even. There were trope names racing through the back of my mind the whole time, but…it was compelling. It still is maybe? It’s just that after I finished watching it, I began thinking (a dangerous pastime).

Like, it simply is sexist. There’s really no dodging that. Let’s break this down:

Constance Zimmer’s character was fridged in the first three minutes of the episode. I mean, quite obviously fridged. Ward made a phone call to Coulson to tell him “I wanted you to share the [man]pain of losing someone you loved,” which we find out later (though it was hardly veiled at the time) was Ward’s method of fucking with Coulson, so that he would act in such a way that Hydra could grab Fitz/Simmons. This was literally the graphic death of a woman so that a man would be motivated to act.

And motivated he was…Coulson lost ALL of his reason in this episode, with Hunter even wanting him to cool it, because Now It’s Personal. Every other fucked up thing that Ward did for the past three seasons apparently wasn’t enough to elicit this response, but one Disposable Woman later, and here we are. Coulson lost his shit so much that he literally had to give control of S.H.I.E.L.D. over to Mack so he could run a mission that “crossed lines.”

Oh, that does remind me; the whole thing with “Mack’s the only one without personal beef against Ward” does seem to hold up, but situated in this episode, it’s not super flattering that Coulson choose the one dude to lead the organization rather than like…the two ridiculously qualified women who had been there since Season One. But okay, fine, May and Daisy maybe are in this too deep. And it was at least lampshaded by Mack.

Anyway, so Coulson decides to go on this guns blazing mission, and requests Hunter to come because he too really, really wants to kill Ward. After all, Ward hurt his girl last season at that’s been driving him to revenge ever since (something which even Bobbi was all “can you not?” about last episode). And this would all be okay, because Hunter truly is the type of guy you’d want for this, and his bank robbing idea was legit.

But at the end of the episode, when Coulson is getting ready to basically suicide-jump into Hydra’s base, Bobbi asks Hunter to “talk sense” into him for her. Guess she can’t make her own arguments? Then her dipshit boyfriend (husband? what are they?) heroically decides he’s going to go with Coulson. The whole scene was just very…Men Act, Women Are. Which maybe was mitigated by the fact that Hunter didn’t get a chance to do the thing with Coulson? Kinda?

Aaaaaand, then there’s Jemma and Fitz. Which like, I love their relationship. It’s so earnest. Granted, I’m not particularly thrilled how much focus has been placed on her inability to decide between which man who heroically saved her she loves the most, but given the fact that a stronger emphasis has been placed on her trauma and recovery, I at least can let it slide.

Or so I thought, until this episode, where Jemma was tortured for information. But here’s the twist; Ward never expected to get information out of her…her torture was actually Fitz’s torture, because it was so hard for him to listen to her screams. Which is true to Fitz’s character, so it’s not like it was completely gratuitous. But they basically gave us the same exact imagery as Leia’s torture orb in A New Hope, and just like with her, Simmons’s trauma is glossed over. And I’m not saying I wanted to see it, of course, but the fact that they only showed Fitz’s upset face during it…? I had flashbacks to Theon’s manpain for Sansa. It was tone-deaf at best. 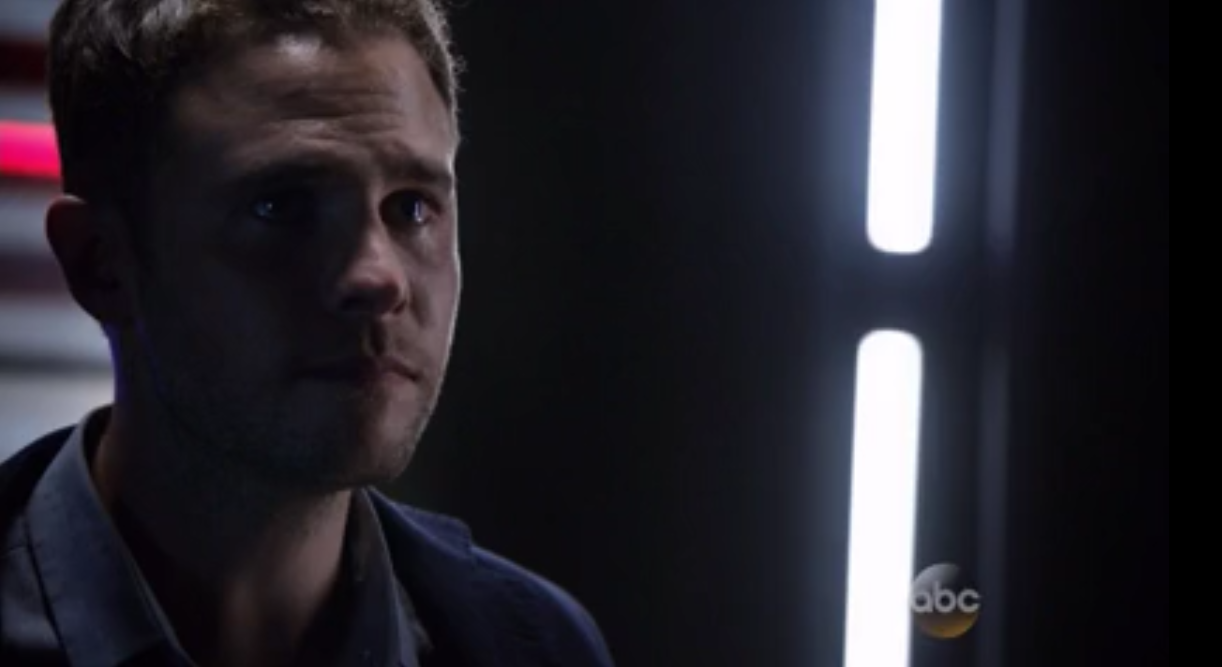 Then, idk, Jemma asked Fitz to let them kill her rather than him sacrificing himself for her (and endangering the world), but he “isn’t strong enough” to live without her, so she cried onto his collar and then he went off into the unknown. Again, none of this was out of character, or horrible, or unearned even. It made sense. But taken together with everything else that happened this episode…it just left me with a horrible, horrible taste in my mouth.

The episode’s entire theme seemed to be “men spurred to action by victimized women.” Which is not the droid I’m looking for. Ever.

And yet, I cannot wait for next week. I am on the edge of my seat to see what happens, and I have no doubt that the resolution will probably be quite enjoyable. We can love our problematic faves, yet it’s important to hang a lantern on their missteps.

I know you can do more, Agents of SHIELD. I’ve seen it this year. I even saw flashes of it in this episode, both when Ward’s brother not-so-subtly told the audience that he’s all about breaking the cycle, because he does not #StandWithWard ever, and when Daisy’s intuition and empathetic understanding helped guide the entire mission. You’re a show with a whole lot going for it; you don’t need these sexist storytelling conventions. Just please, prove me right.