For many of us, the Harry Potter movies might not seem like movies at all, but rather vessels of childhood feelings crafted sturdily enough to endure decade after decade. However, if you go back and watch them again, you might notice one of the movies is a little, well, cinematic. Prisoner of Azkaban is full of odd camera angles that add to the magical aura of the film. It boasts an immaculate color palette that radiates wonder. The film’s pacing that allows the plot to spring forward without losing the viewer. More so than any other film in the series, Azkaban bears the unmistakable mark of an artist’s touch.

Just as Alfonso Cuaron (Gravity, Roma, Y tu mama tambien) swept in to the Harry Potter series to elevate one of its entries to the level of true amazement, Maurice Roucel dropped by Nautica to create a masterpiece. It’s rare to see so many masterpieces in one perfumer’s resume – New Haarlem by Bond No. 9, Envy by Gucci, L’Instant de Guerlain, Iris Silver Mist by Serge Lutens, not to mention Musc Ravageur, widely celebrated as one of the greatest fragrances of all time. Roucel’s perfumes tend to straddle the line of lush and refined. Nautica Voyage nails this sweet spot exactly.

After fumbling with an iconic, but rather screechy fragrance in Nautica Blue the year before, Roucel created a masterpiece in Nautica Voyage. These days, it sits humbly on the shelves next to designer brand perfumes priced higher, packaged fancier. You grab the display bottle of Voyage and spray it on your wrist, and nothing unexpected pops out – it smells blue and aquatic, just like you imagined. That you’re smelling the work of a master perfumer would probably never cross your mind unless you buy the perfume, wear it for years, and gradually realize that it carries the complexity and uniqueness of a scent three times the price.

The first thing you’ll notice with Nautica Voyage is that it does indeed smell aquatic, but not synthetic. This is the work of three key notes – apple in the top, lotus in the mid, and white musk at the base. The result of these players working together is an extremely well-blended core that’s at once fruity, floral and sensual. Part of the magic of Nautica Voyage is that it smells more like itself than any given identifiable note; it carries its own identity instead of hearkening to other ideas.

This clean yet elegant structure is bolstered by the flourish of mimosa flower and a base full of recognizable but well-contained notes. For all its smooth florals and lithe, rainy accents, Nautica Voyage is weighed down by some very dignified base notes. The oakmoss in particular probably allowed Roucel to pass of Voyage as masculine when indeed its composition is as unisex as anything on the market. For something from a conservative style brand, Voyage certainly has the makings of a genderbending fragrance that’d be perfectly at home in on a Provincetown beach.

As much as I hate to once again mention economic value in regard to fragrance, Voyage simply can’t be talked about without mentioning its price tag. This unique, master-crafted unisex fragrance goes for under $20 per full bottle online. For years I’ve been recommending it to men and women who want to smell wonderful with a single bottle of perfume, and I doubt I’ll stop until it runs off the shelves. Voyage boasts an incredible evolution from fruity to floral to musky that absolutely fits its name. For a well-performing fragrance that could shine on the beach or keep its head low at the office, Voyage truly offers its own bit of magic to the world.

You can pick up a (very affordably priced) bottle over at Fragrancenet by clicking on the image below! 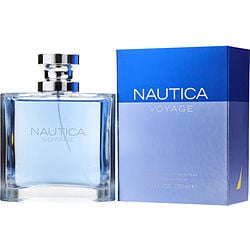 In this article:Featured, Fragrance, Nautica