Last week’s “Steven Bomb” brought those of us who watch Steven Universe (SU) lots of amazing goodies, including two new songs, adorable shipping feels, the further shredding of toxic masculinity…things show creator Rebecca Sugar probably does every day before breakfast. However it also brought us something that was quite anticipated in the fandom: Peridot’s “redemption.” She became a Crystal Gem. 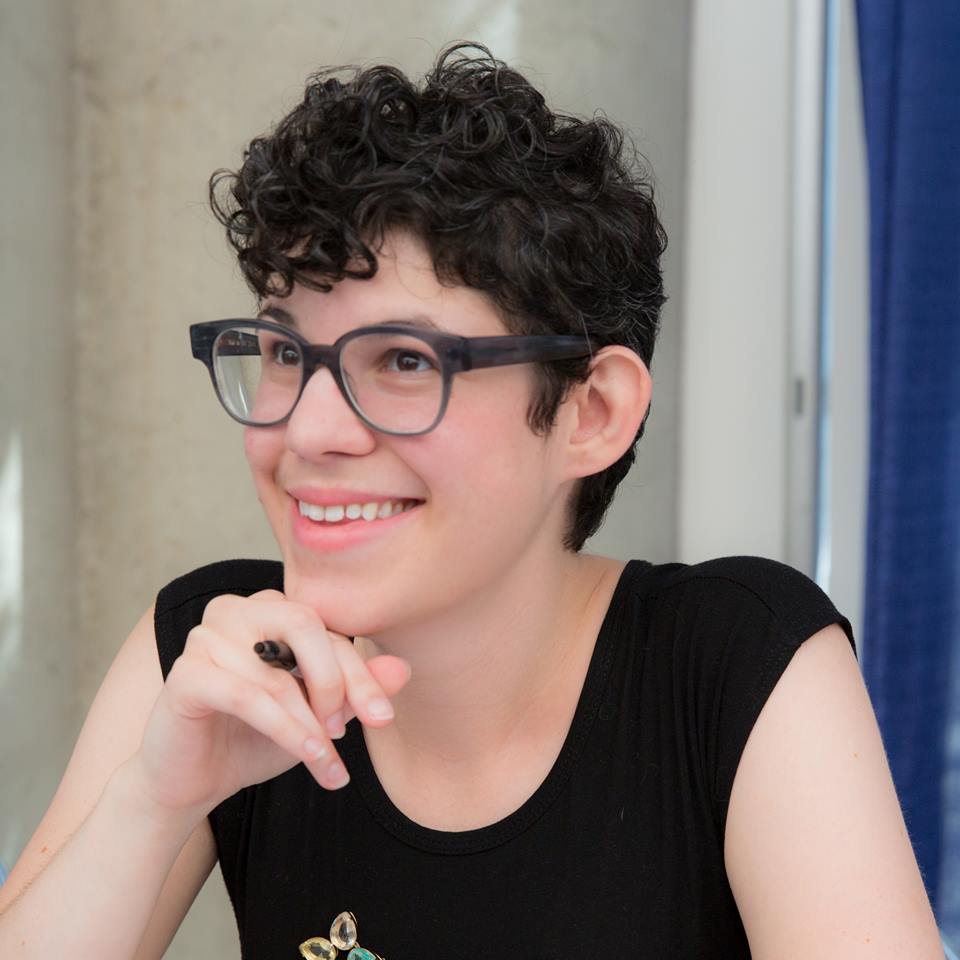 All hail the one true cinnamon roll.

I’ll be honest; this was something to which I had been quite opposed. I think a large part is that I’ve always detested the “Leather Pantsing” of a villain. Peridot has an adorable nerd voice and amusing antics. For this reason, long before she was even captured by the Crystal Gems, people had been propping her up as a “problematic fave,” which in the case of villains, can often spill over the line from “enjoying an antagonist,” to excusing messed up actions. Prior to the events of “When it Rains,” the SU narrative gave us no reasons to sympathize with Peridot, and many reasons to actively oppose her.

So when the show started to point towards signs of her redemption arc, there was a large part of me that didn’t want the people who had been previously championing her “proven right.” Consider it my scars from living in a world where there are Kilgrave, Kuvira, and Grant Ward stans.

However, boy was I a clod for being worried. After all, this is SU, a show that I still consider to be one of the smartest on television, and one that is not shy in its progressive nature and positive messaging for children. Peridot was given a redemption arc, yes. But the context and framing of it not only more than justified its existence, it made it a narrative necessity, in my opinion.

I am speaking, of course, about the fact that this character development is situated in our continuing discovery of the Homeworld Caste System; there are certain types of gems that are more valued than others in their society. This was something hinted at in “Friend Ship,” when Pearl told Garnet, “I’m just a Pearl. I’m useless on my own,” but it was nothing made explicitly clear until after Peridot’s capture. 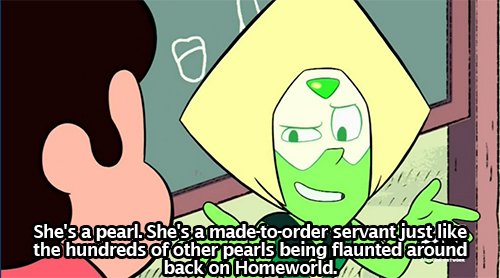 “Too Far” gave us even more of a sense of the “natural hierarchy,” with Peridot asserting that Amethyst should be in charge because she “outranks” them all. It’s classism, on a very basic level, but also can be viewed as a proxy for racism in many ways (Rebecca Sugar doesn’t write this show in a vacuum chamber). Then there’s the fact that Garnet is rejected as a “real gem” on principal due a thinly veiled allegory for homophobia and transphobia. And Peridot accepts these prejudices at face value; she’s never been forced to challenge them, or even think about them at all. Which is, in short, “privilege.”

Just like, think about this for a minute: SU put the concept of disempowerment/oppression into a language that children can understand. And they’re then given a front-row seat to witness how everything around which the oppressors base their power are, well…baseless.

Pearls are not just fancy “made-to-order” servants, as we’re clearly shown how our Pearl broke the mold and tapped into her unexplored potential no one on Homeworld would have considered. Garnet is not weaker for being a fusion of two different gems; being made up of “love” makes her one of the strongest characters there is as she is clearly greater than the sum of her parts (if only she had been given a song to express this…).

And this idea of the “natural order” just doesn’t hold water. Pearl may be a Pearl, but she has an aptitude for math and science that the other Crystal Gems count on her to apply. Even if she loses a robot fight to Peridot, that doesn’t diminish her value to the team. Amethyst is not suited to leadership, despite the fact that she is a quartz, and she’s absolutely content to follow orders.

Through all of this, Peridot is the sounding board against which the narrative can reject these notions of prejudice. She asserts something problematic, and the others react against her swiftly: 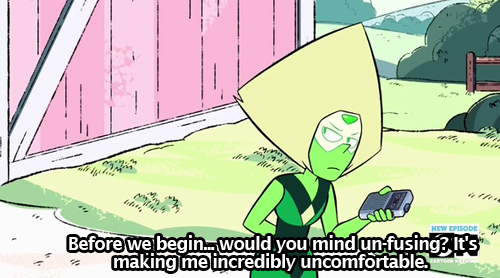 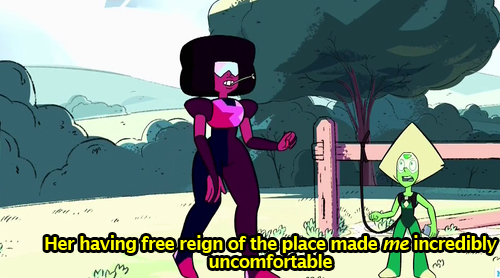 It’s a nifty short-hand. But here’s the amazing thing: Peridot doesn’t fall flat as a character in her own-right. She’s not just some classist strawman being used to churn out a “progressive” narrative. Instead, she’s a painfully realistic depiction of someone who grew up buying into an incredibly hostile system…something that is sadly not uncommon in today’s society.

More so, she was given space to grow. Her first reaction to being proven wrong about certain assumptions was confusion. Why were the other gems cheering for Pearl despite her losing the robot fight? Then we see her begin to consider other people’s feelings and points of view. She felt “small” when she accidentally insulted Amethyst, and Peridot’s apology at the end of that episode was proof that she was beginning to understand the value of looking outside the lens of “objective truth” (the justification for the Homeworld caste system) and consider empathetic connections.

This growth was slow and organic. And it also wasn’t simplistic. Prejudice is not easily shaken, and Peridot’s guiding motivation in life, to serve Yellow Diamond, was not just something that the show could have kicked aside because she and Amethyst bonded a little.

Garnet’s backstory episode started things off, which was a brilliant way to put the Homeworld society front-and-center. We learn how individual expression is not something valued by Homeworld gems, or even allowed, from what it seemed. Sapphire is an aristocrat because it’s implied that there’s few of her, and her abilities are uniquely important to her diamond’s plans. Ruby is so common and “valueless” that she doesn’t even think she has a right to live if it comes at the cost of Sapphire being separated from the court. She literally screams protests as Sapphire saves her.

And five thousand later, this internalized prejudice is something Ruby still deals with:

Ruby: Did they hurt you?

Ruby: Who cares!? *starts tearing up*

At the end of the episode, we also get Rose’s “welcome to Earth” to Garnet, as a way of saying “individual expression is welcome here”:

Though these were details we may have been able to guess at already, it’s important that they were explicated for the context of Peridot’s arc. In “It Could’ve Been Great,” we see her continued discomfort with the “freedom” on Earth. Why aren’t the Crystal Gems working at all times? Since we’ve seen how a Diamond Court operates, we better understand where she’s coming from with this.

It also provided the background for us to make sense of Peridot’s commitment to Yellow Diamond. She exists to serve her diamond, and, as it is strongly intimated from “The Answer,” all other gems do for theirs. Sapphire would have happily ended her life for the furthering of Blue Diamond’s cause, and her life was one considered to have “value.” Even those more privileged on Homeworld, such as Peridot, end up harmed in this heavily toxic social structure.

Peridot makes sense of it by asserting that the diamonds have no flaws:

Peridot: They’re objectively better than us. Every Gem has their strengths and weaknesses, but not them. They’re absolutely totally completely flawless beings! Especially my diamond, Yellow Diamond, the most perfect, the most reasonable, rational, efficient decider ever to exist in the universe!

She idealizes Yellow Diamond, because her entire socialization has been to idealize Yellow Diamond. It would have been out of character for Peridot to not do everything she could to contact her. Yet her redemption itself was earned. Her conversation with Yellow Diamond in “message received” was all about the breakdown of this idealization, which was prompted because of her experiences on Earth.

Though it may have been limited, Peridot had bonded and learned to empathize with the Crystal Gems. Steven explained to her their reasons for wanting to take in a pretty sunset. It was foreign to her, but Peridot’s increased exposure to the Earth helped her appreciate it. As a result, she proposes to Yellow Diamond potential for utilizing the planet without disrupting its ecosystem. It wasn’t too sudden, and it was still framed in the context of Peridot’s original purpose: to serve Yellow Diamond. In other words, this moment wasn’t rushed or undeserved.

She was confronted with Yellow Diamond’s major weakness, and it pushed her over the edge she had already been crawling towards.

However, the final episode of the Steven Bomb, “Logdate 7 15 2,” gave us an even closer look at Peridot’s journey, in case we somehow still thought her breaking away from Yellow Diamond wasn’t earned. In this, we see her struggle with her discomfort at the idea of a permafusion. In perhaps one of the goofiest and meta episodes of the show (Peridot is literally a trash-shipper), we were ironically given one of the most powerful messages: ingrained prejudices can be pushed through when you find the right language to explain something.

Peridot was a stranger to Earth. She was confused and disgusted by what she saw, as it went against everything she had been socialized to believe. But her redemption arc was meticulously planned. Her increased familiarity with her surroundings and the people in it, even evidenced by small things such as going from saying “the Steven” to plain “Steven,” is what allowed her to finally push past the incredibly damaging messages of Homeworld.

That’s why her redemption arc was necessary. SU is teaching our kids when to challenge someone’s hurtful remarks, and when to give them a chance. That you can find common ground and reach understanding, even with individuals who were raised with some messed up ideas. It’s called “learning,” and this show actively encourages us to be the teachers. Praise Steven Universe.

Besides, if nothing else, her moment of redemption was one of the best things ever: