For the first time in a few weeks, I finally had a weekend to myself. So naturally, I go on a complete Netflix Bender and watch what I’ve been dying to see for quite some time. Just in case you have a free weekend, I wanted to share my findings.

Deidra and Laney Rob A Train

Newcomers Ashleigh Murray and Rachel Crow star in possibly one of the most innovative heist movies I’ve seen in a while. Netflix has been known for putting cool ideas out there, but this one seems fresher than most. Sure, the title gives you the main plot line, but the layers quickly reveal themselves as two sisters team up to bail their mom out of jail-through literal highway robbery.

The determined Deidra and awkward Laney will win over your sympathy almost immediately. The rest of the family is so eclectic, it’s reminiscent of the Gallaghers. There’s quite a bit of strife, but that comes with the territory of being a part of a dysfunctional family. But I love the steps the movie takes to flesh out as much as possible within an hour and some change. And give me some ideas on how to pay these bills…

Anyway, the odd nature of the movie makes way for plenty of comedy (and familiar faces that don’t outweigh our newer stars). It’s actually very heartwarming towards the end, but entertaining throughout.

As the second season finishes up, I realize that The Fandomentals (at least, the site itself) hasn’t been turned on to Chewing Gum.

Played by Michaela Coel, we follow Tracey’s adventures through the teenage underground of London in a way that hasn’t really been explored before. There’s tons of diversity (in both class and race), so nobody is left out of this weird ride. It is funny, cute, and absolutely strange. The chaos in the show involves weird family members, religion, and Tracey’s quest to lose their virginity in quite a comedic package.

Those used to British humor will probably enjoy it, as it has begun to leak its way from the UK to the US. Check it out ASAP if you like weird fun. You’ve been warned (and hopefully intrigued). 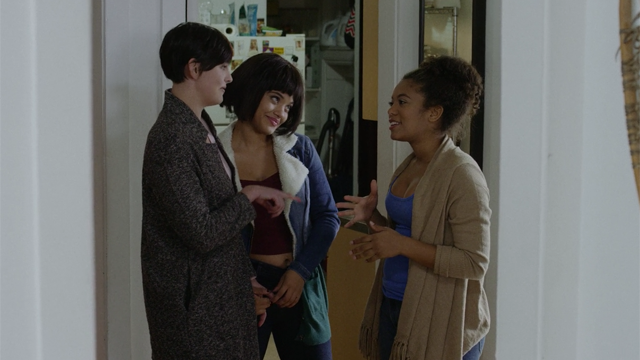 This Netflix original is a bit toned down on the ridiculous nature of the first two suggestions, and somewhat reminds me of This Is Us. Easy follows different couples’ stories through the landscapes of Chicago, with each of them facing their own (not so easy) issues. It’s a vignette-like show such as Black Mirror, so I advise to not get too attached to any one couple. But there is a quite a bit for everyone.

My personal favorite features these two above, in the episode “Vegan Cinderella”. It is a very casual show in nature, so I wouldn’t expect too much. But it’s perfect for a binge, and if you want to escape real life for a while.

Check these out, or let me know if you’ve already watched these shows! Also recommend some more for me, because I have one more free weekend coming up 🙂