So, about 3 weeks after watching Season 4 of OITNB, I am still trying to dissect and discern just what the hell happened. But not just for the sake of Poussey’s death (although the definite chance to act with Samira Wiley has indeed been dashed). I’m just genuinely confused. That was a roller coaster.

And as I re-watched the episodes after initially giving in to the binge-watch phase, I realize something extremely ironic about this season.

It’s about allyship. The entire season, in and of itself, is about allyship, and knowing where your friends lie. And this is where, in turn, OITNB and their writers ultimately screwed themselves over. Just for perspective, here is the writing team:

I see maybe 2 POC in that staff. The dog is the darkest actual living thing in that photo.

THESE are the people that are supposed to be making commentary about the biased, for-profit prison system through the lens of this show. Okay.

I will say this, though: OITNB did a good job of pointing out false allyship, and how it impacts the world around them. Here’s just a few examples: We have allies like Piper, who tries to make up for past guilt. Personally, I think she’s the leader in general fuck ups in Litchfield, and it shows. For her type of ally, the atonement usually does not make up for the crime. Piper’s allyship was practically non-existent until her crack trip. I’m not kidding. She literally smoked crack, confessed her sins, and THEN took it upon herself to join Blanca on the table. This also served as an underhanded way to get back at Piscatella. All in all, she’s one of the worst types of allies, a special brand of manipulative.

Soso actually fit into quite a similar narrative at the beginning of the season. She outed Poussey by using any stereotype in the book, completely misrepresenting her. The difference between her and Piper, however, is that she caused minimal damage and IMMEDIATELY corrected her actions. She’s not perfect, but far better than the above.

In fact, both of them seem to follow the curriculum of Ally Theatre, which is a really nice term I haven’t considered before.

Then there is Judy. She obviously fits this type of bad ally that rides the “I know a black” narrative until it no longer benefits her. She tried to get the hell out of dodge instead of using her celebrity voice to attest to what happened in Litchfield. For now she is intercepted, but it still does not gloss over the fact that she would have done absolutely nothing about Poussey’s death, the person who idolized her.

You know who else could fall into this pretty easily? Caputo. He had almost as much power as Judy this season, and did not a goddamn thing to help, until he was spurred by an inmate’s death and Crystal Burset stalking him. 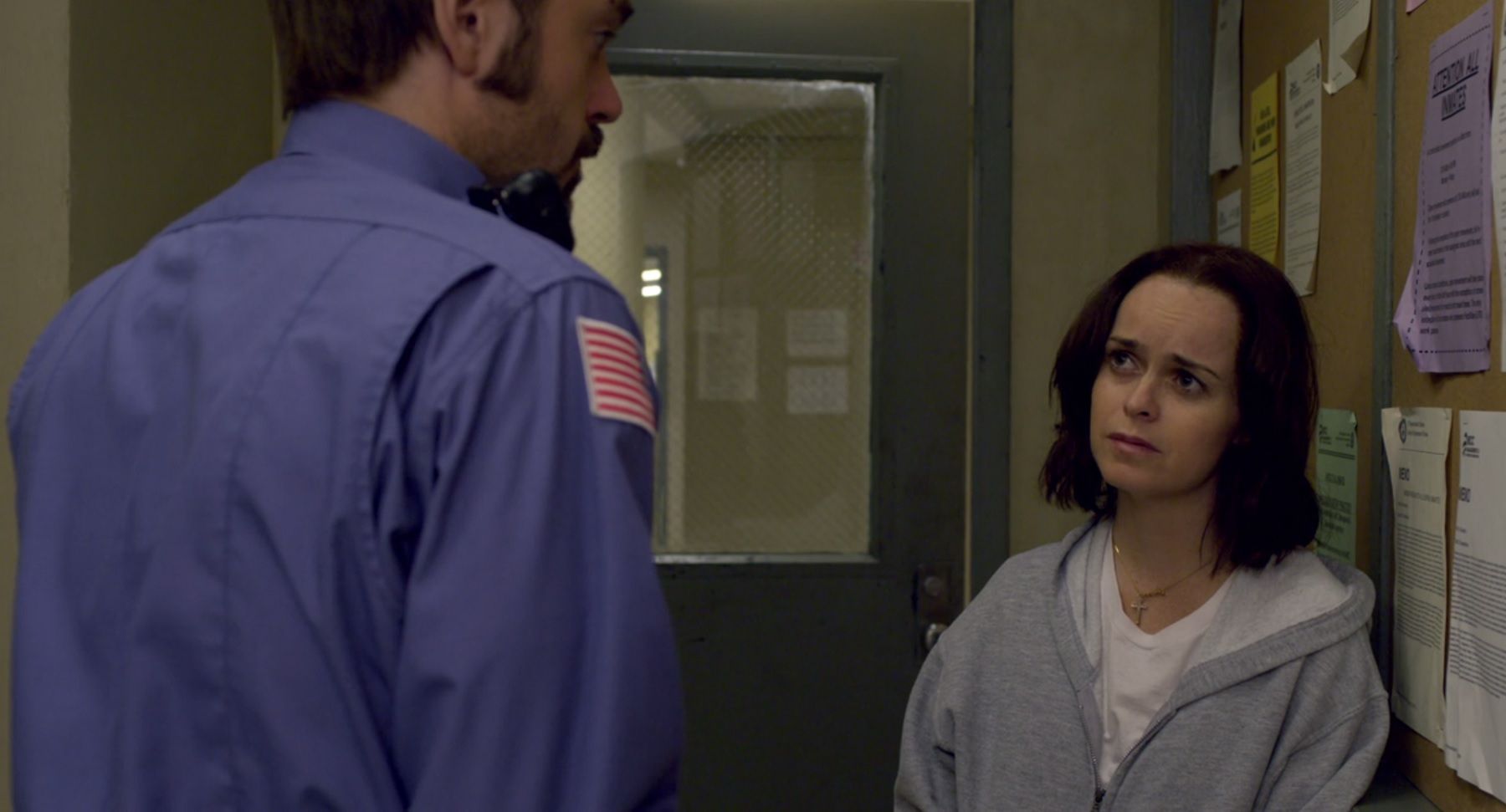 And last but not least, we have Coates. He was not always as outspoken as he was in Season 4. In fact, he did not gain his hyper-awareness until Pennsatucky had to actively tell him that he raped her. I have to only imagine the embarrassment she faced by doing such a thing. His reaction is kind of terrible too, as he’s genuinely shocked with what he did, in disbelief about the entire situation. Ultimately, he accepts it and uses his confusion and anger as a vessel to speak out against other COs. Mostly, the credit goes to the fact that he is attempting. This is the kind of ally who is just starting and reflecting on just how much shitty stuff he’s done. It, however, does NOT excuse his shitty actions whatsoever. An article on Screen Rant articulated that this can be bad timing- or perfect timing- considering the sentencing of the repulsive Brock Turner. I would like to say that this applies to other subjects, but more on that later.

If I had to rank the OITNB writers, it would be somewhere in-between Unknowingly Problematic and Good Intentions, Horrible Execution. And, really, that is my summation of this season. It was everywhere structurally, and the social commentary was not visible until I fleshed it out through multiple viewings.

But I want to move on to Poussey’s final scene in Litchfield. I’m about to get really political here and I apologize about that if it is offensive to anyone. But I have to say these things, considering that OITNB tried to speak loud and clear this season.

I am a supporter of the BLM movement. How can I not be? I have attended (peaceful) rallies, and discussed with multitudes of people about why this movement is near and dear to me. I want to say that from the deepest, most sincere part of my heart, that in terms of this season, that writing team gave black people some bullshit, queer women especially.

I’m just as pissed, to be honest.

How is anyone going to tell me that this show cares that much about Black Lives Matter when- in ONE season mind you- they:

Is it realistic, in terms of the different types of happenings in the for-profit prison system? Probably. Terrible Things like this probably happen every other day. But I also want to take a look at the other sides this season, just for the sake of equity. I want to take a look at the Latinas, who are endlessly frisked and stripped of their rights, and the white women who generally end this season unscathed. The worst Piper has is a burn, which is half self-inflicted and half brought upon herself. Alex has PTSD and hung a mentally disabled character out to dry for it.

Let’s talk about the sadist voyeurism that was Poussey’s death. We were made to watch her die. She wasn’t able to breathe, and my mind instantly flashed back to Eric Garner’s public execution. We saw Caputo’s careless team of fuckheads leave her body on the floor and talk about her so nonchalantly it was like they were robots. All of a sudden, memories of Michael Brown hit me. We saw the MCC team try to slander Poussey, and at least the OITNB team were smart enough to not have that happen.

Unfortunately, the same did not occur with Trayvon Martin, when the conservative media dragged him through the mud for wearing a hoodie. This scene was a little more than triggering, not just because of the loss of Poussey but the actual flashbacks I had. What’s worse is that I was seeing myself under that knee, I felt her suffocate as nobody listened to her pleading. I can only imagine how others more closely connected with police brutality managed to swallow this scene that we were force-fed.

So, real talk- was this the Black Lives Matter season because black women’s issues were featured, or because it caused us to hurt so damn much? Because I’m leaning towards the latter.

I’m not going to hide that I’m pissed. In fact, I will add that I am also disappointed. OITNB had the chance to do something impactful with Poussey’s death- I actually hoped it would go somewhere with #sayhername getting a mention- but it ends in a cliffhanger of violence against authority, which is not a good narrative. In fact, to those prejudiced against BLM, it might prove their point. Don’t get me wrong, Taystee’s anger, along with the rest of the prison, is not displaced. But in the end, the message is muddled. Did it really take a death of a black character to show the utter corruption of the system? Is this not something we know already? If a character death was necessary, does it always have to be the LGTBQ character who was on her way to happiness?? Just…whatever.

In the end, I do not know if I will be watching Season 5 of OITNB. These last episodes alienated me while trying to hit way too close to home, and I know that I’m not the only one. Hopefully, they will get their act together, but I won’t hold my breath. Jenji Kohan’s GLOW may be one of the most underrated programs on Netflix. Partially, I think, because of its premise as a wrestling show,... All Falls Down: OITNB Recap Part 2

The stakes are raised in the latter half of Orange, but it does not completely save the season. There are many short-lived stories, some... Making Skaikru Great Again in S4 of The 100

The 100 Season 4 Retrospective Part Three: Themes Content Warning: This retrospective discusses suicide, as depicted on the show. This is it, folks. The...