[tw for discussions/depictions of violence and war, and discussions of rape]

Rather than recap the episode for you—since it was basically just the lead-up to a battle, the battle, and the aftermath of said battle—I want to instead talk about something Outlander does better than nearly any show on television, now or…well. I’m gonna say it: ever.

Outlander is not afraid to deal with trauma. I’ve discussed it in previous reviews, but I think it shows itself more than ever in this episode. As I said, it’s all very martial. The Scots are gathered near Prestonpans (a big, boggy field), and the English army is on the other side of said bog. There’s arguing about whether to attack, but ultimately they decide the field is too dangerous and they’d all die.

Claire has told Jamie that the Scots will win the day, so he’s ready to go. Some kid who lives nearby shows up and offers to lead the army across the field, which he does, and then there’s a big ol’ battle scene (yes, an actual battle scene; not a cop-out like some other shows do sometimes), with cuts back to Claire in the makeshift infirmary.

The Scots do win, as Claire’s knowledge of history promised, but not without cost.

The episode opens with Claire standing over the body of a dead Scot. She muses, in voiceover, about casualties in battle, and just as in last week’s episode, we’re reminded that Claire has seen the horrors of war before. We learned about Claire’s trauma last week, so while it’s touched upon, it isn’t the focus of the episode.

There are some wonderful, amusing bonding scenes between Angus and Rupert. They’re paralleled by two dudes from another clan (or possibly Irish? I dunno I sorta missed that bit) who are bffs. One of them promises the other he’ll take care of his wife if he dies and they have a cute scene about it. Angus overhears and tells Rupert he can have his sword and his sporran. Rupert is unimpressed and assures Angus that no one’s gonna die. 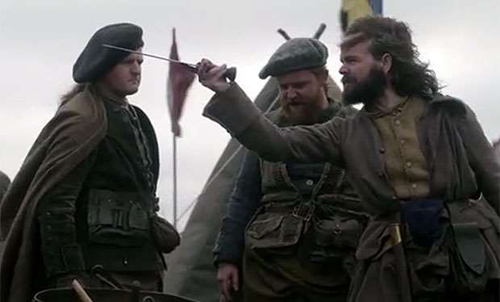 Angus and the Two Dudes

Okay anyway the battle. It was a beautifully shot sequence. Obviously the show doesn’t have a budget like a feature film (think Braveheart), so the battlefield was shrouded in fog, giving us little glimpses of the action, like momentary vignettes of violence. 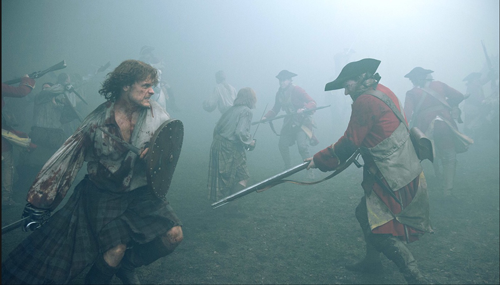 Did I mention there was blood?

It not only allowed the action focus on individual characters, but also it gave the battle scope budget constraints wouldn’t have ordinarily permitted. We got the sounds of battle, small snippets of the sights of battle, and Claire and her ladies tending the wounded; all of it added up to let us know It Was Going Down.

Back to my point about trauma…Claire assigns Fergus the task of keeping the hospital fires stoked, but he dismisses it as “women’s work.” He begs Jamie to let him join the fight, but Jamie says no. Fergus, the little rascal, sneaks off with the men and joins the fight. 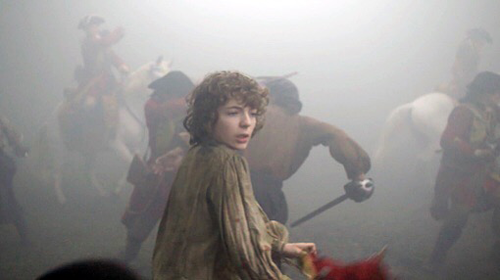 It doesn’t go quite the way he hoped.

He’s armed with only a small knife, and as men and horses fight and scream and die around him, you see his expression of horror. You fear for his safety: he’s so little and the battle’s so big! He’s unhurt, thank goodness, but when Claire finds him afterwards he’s clearly not himself. 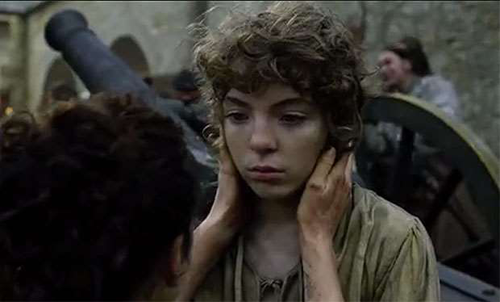 Poor bb Fergus has already been through so much this season. He was raped by Jack Randall back in 2×6, and that led Jamie to challenge Jack to a duel…which led to Claire’s early labor…and Jamie’s arrest and imprisonment in the Bastille…and their baby’s stillbirth. Fergus blamed himself for all of it, telling Claire that he should have been quiet. While being raped.

Now the scrappy kid has killed a man. He tells Claire the man fell on his knife, and his horror at the act is heart breaking. He went off thinking war was glorious and wonderful, and he comes back looking broken.

Of course war is horrifying, and even today young men (and women) enlist thinking it’s going to be all about glory and honor. Fergus’ experience reminds us not to believe the hype. War is hell, kids; don’t let anyone tell you different. If it can bring down the largely irrepressible Fergus, imagine what it can do to less resilient minds.

Meanwhile, Angus has dragged an unconscious Rupert into the infirmary. He was slashed by a British bayonet and sports a nasty gash on his tummy. There are a lot of good-natured fat jokes, and while fat jokes normally upset me, these didn’t. They were obviously said with love and affection, and honestly none of the men dishing them out were exactly skinny minnies.

A cannon blast exploded just behind Angus, but he assures Claire he’s fine. She checks him for concussion and tells him not to go to sleep, but she doesn’t do any further examination. That confused me. A cannonball exploded right behind him! You aren’t going to look at him?

It comes back to haunt her near the end of the episode: Angus collapses, blood flowing from his mouth, and when Claire pulls his shirt up she sees that he suffered abdominal injuries and has been bleeding internally for the last several hours. There’s nothing she can do (though given the lack of surgeon, she probably couldn’t have saved him anyway), and they sorrowfully watch him die.

Rupert heaves himself up off of his sickbed to claim Angus’ sword, and later he and the surviving random bff guy (yeah, one of them died too) are seen drinking together.

Angus’ death takes place, as I said, near the very end of the episode. At this point the Scots have won the day. They’ve lost barely 50 men. Everyone is exultant with victory, and Prince Charles comes to the infirmary to make a victory speech. It’s all very inspiring! Claire reminds Jamie and Murtagh that she was right about the battle of Prestonpans, which means she must be right about Culloden Moor too.

The reminder of that specter in the room—Culloden Moor and the overwhelming defeat the Scots suffered there—combined with the death of a beloved minor character remind us, once again, that trouble is coming. As the show did in the episodes leading up to Jamie’s showdown with Randall and Claire’s stillbirth, you can feel the tension mounting. You think, briefly, that the Prestonpans victory is a relief, but it’s not: in its own way it just adds to it.

Angus is dead. Dougal went blood-crazy and killed everyone in sight, pissed the Prince off, and got banished. Fergus is traumatized. Jamie has hope for the future, but Claire has little. Murtagh says, during the drunken celebrations later, “I expected the flavor of victory to taste sweeter.”

Every moment of pathos in this show feels earned. Yes, the parallels of the two random guys to Rupert and Angus were a little heavy-handed, but because we know Rupert and Angus, and we’ve seen their antics since season one, it didn’t feel empty. Angus’ death mattered. Rupert’s survival mattered. Dougal’s madness mattered. Fergus’ trauma and even the Prince’s ridiculous victory speech all have weight. Nothing is dismissed or swept under the rug, and we see the fallout from everyone’s actions.

That, if nothing else (and there’s A LOT ELSE), sets Outlander apart from every other show on television right now.

Oh, before I forget: shoutout to Andrew Gower as Bonnie Prince Charlie. He especially shone in this episode, prancing around in his tartan coat and trying to lead the soldiers into battle. The Prince is completely oblivious to what he’s facing, or the truth of what Scotland’s like, and Gower plays it perfectly. Also his accent is ridiculous and I love it. 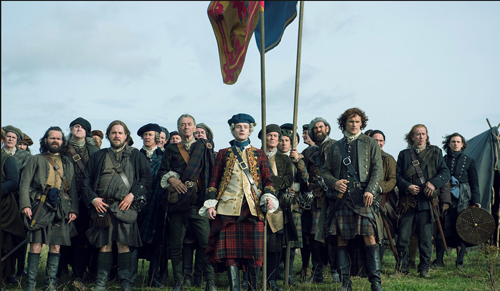 Episode Grade: just. A, okay? Just assume A unless I say otherwise. This was essentially a character episode disguised as a battle episode.