[tw for violence and discussions of rape]

Well goodness me. What a trip that was!

This week’s episode opens with Prince Charles and his advisors arguing about their next move. They’ve marched south all the way to Manchester, and Charles wants to march on London. His advisors urge him instead to turn the army around and head back to Scotland for the winter: there are three English armies somewhere between them and London, and they don’t know where. Also, the people haven’t exactly risen up and embraced Charles like a savior the way he was hoping.

Jamie argues for London, but he’s outvoted. The Prince is furious, but with no one else behind him, he bows to his advisors’ wishes. Later, Jamie tells Claire that victory in London didn’t matter much to him: if he could’ve convinced them to march south, that alone would’ve been different than the history Claire described, and maybe enough to change the fate of Culloden Moor. 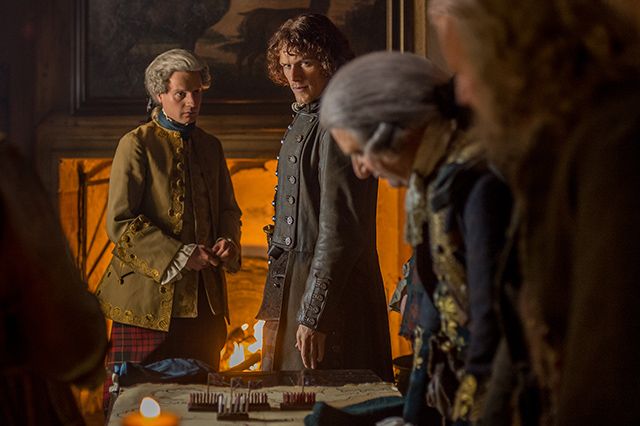 it is a Tense Discussion

Later Dougal bursts in and tells Jamie that they’ve been ordered to take their men north to Inverness, and to prepare for the Prince’s arrival there. It is, Dougal says, the Prince’s guys trying to get Jamie (and his influence) away from Charles, and they have no choice but to follow orders.

On their way north they’re ambushed by a band of British Redcoats. Claire, Jamie, Rupert, Dougal, Murtagh, and Fergus try to escape, but Rupert is shot through the eye and they have to stop. They find an abandoned church where some of Jamie’s men are waiting, and Claire is able to get the bullet out and patch Rupert up. Whew! I didn’t want to lose the other half of the Rupert-Angus dynamic duo.

Just as Claire gets Rupert on his feet, Dougal sees lights outside. The Redcoats! They’ve discovered the men and horses in the woods, and they threaten to set the thatch roof on fire if they don’t give up their arms and come out.

Jamie offers to trade himself (since he’s a wanted man) for the others’ freedom, but before he can, Claire cries out for help. Just as she did in 2×9, she convinces the Redcoats she’s an Englishwoman who’s been kidnapped by barbarian Highlanders.

Jamie is NOT HAPPY (to say the least), but Claire declares she is the Lady Broch Tuarach, and the men in the church are just as much her responsibility as Jamie’s. Realizing she’s right, he grudgingly agrees to the plan. Dougal negotiates the trade: they turn over Claire and give up their arms and horses, and they’re free to go.

A young lieutenant watches over Claire, and the next morning he tells her they’re off to Belmont, the home of an English nobleman. Belmont?? Nuh-uh! Jamie and Murtagh are looking for her at the garrison, not some English muckity muck’s house!

Luckily Claire runs into Munro, Jamie’s beggar friend whom you may or may not remember from season 1. She has a very pointed conversation with the lieutenant about Belmont and whispers for Munro to find Jamie and tell him. Munro agrees and runs off. 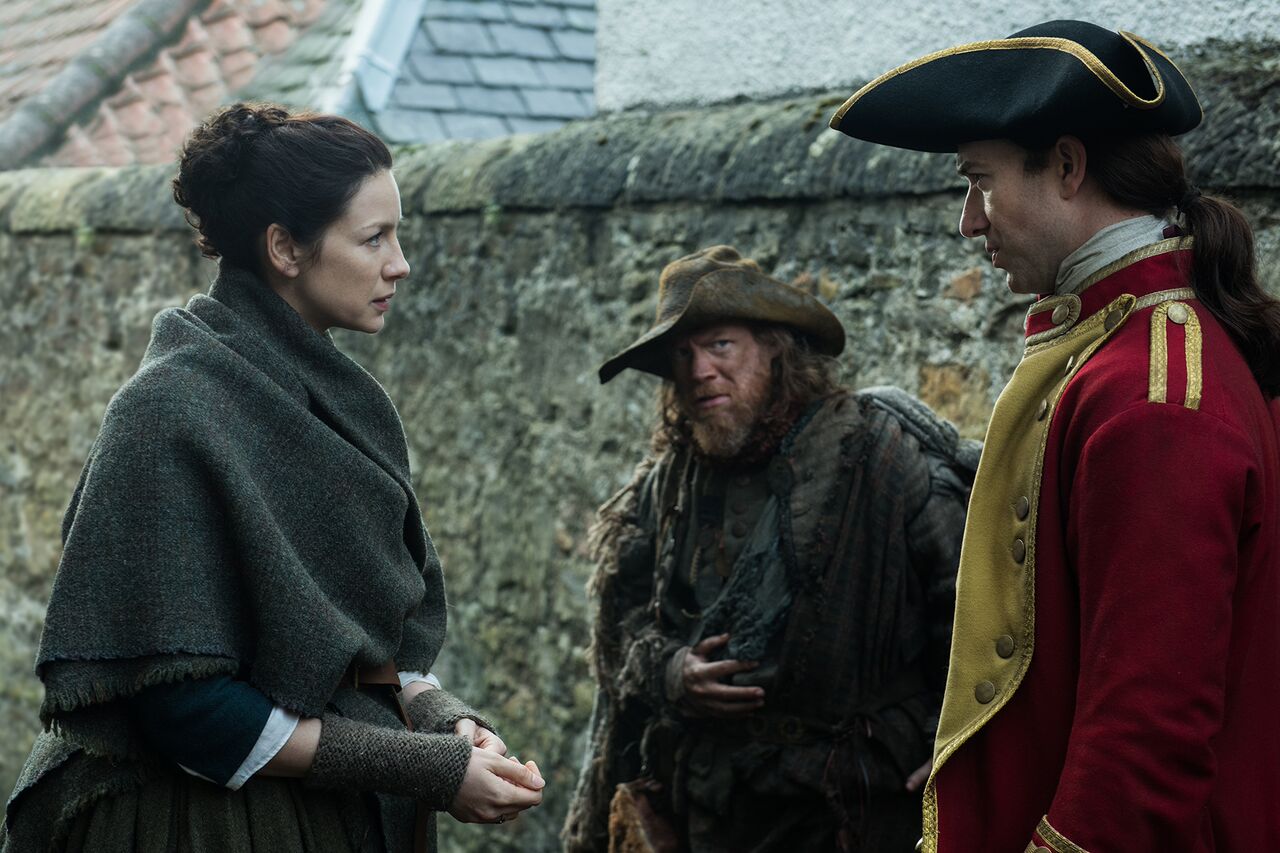 it is another Tense Discussion

Things get sticky when they arrive at Belmont, because guess who the English muckity muck is? The Duke of mother-frakkin’ Sandringham. “Like a bad penny,” Murtagh mutters, accurately.

The Duke plays along with Claire’s ruse and agrees to shelter her. When the lietenant is gone, he explains that he’s recently spent some time in the Tower due to a “misunderstanding” that Claire guesses has to do with his loyalties to the Crown. He tells her to write a letter to Jamie, and his messenger will intercept him on the road to deliver it, then they can all escape the English together!

Claire. Believes him? Which is a little weird? And writes the letter in terrible Gaelic. 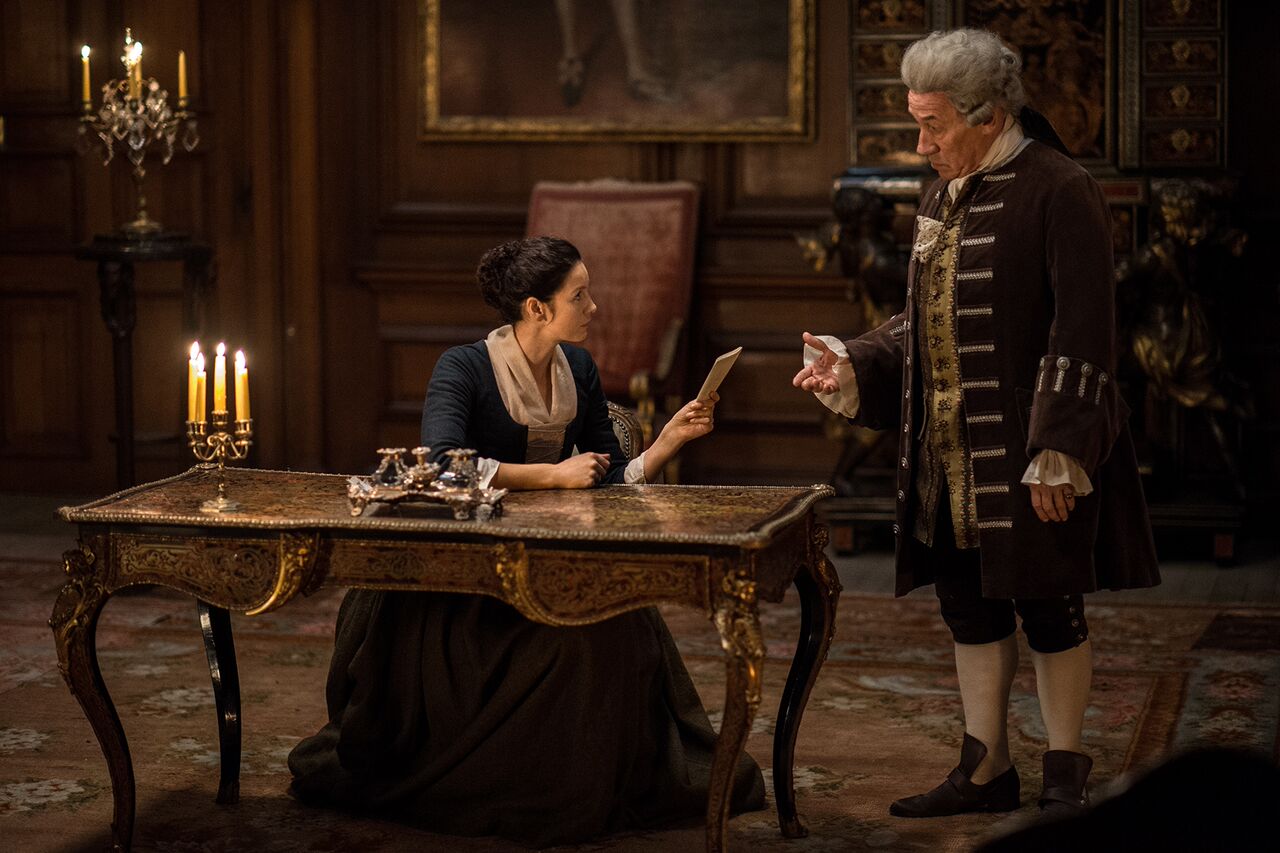 the Duke got a new wig

The messenger finds Munro and Munro delivers the letter to Jamie. He and Murtagh struggle through Claire’s ungrammatical, misspelled Gaelic and figure out she’s at Belmont, home to the Duke. Murtagh is deeply offended by Claire’s butchery of written Gaelic, but Jamie assures him he’ll give her lessons later.

Back at the Duke’s place, Claire is greeted by Mary Hawkins. It turns out she’s the Duke’s goddaughter, and he’s arranged a marriage for her to a Loyalist. Hedging his bets as always. After Mary leaves, Claire notices something odd on the Duke’s valet’s hand: a birthmark. The same birthmark she saw on her attacker’s hand back in Paris.

She questions the Duke closely, and though at first he prevaricates, he soon loses interest in the game and confesses. He tells her he owed the Comte a debt, and the Comte insisted he pay it by killing Claire. Instead he talked the Comte into just having her…raped…because…that’s so much better. He is unconvincingly doleful about Mary, and he gleefully reveals that he’s actually a Loyalist and Jamie is riding right into a trap!

Claire is desperate to get word to him somehow, but the Duke has her locked in her room. At this point I honestly thought Claire wrote the message in Gaelic because it really said something like, “I don’t trust this slimy poop-head any further than I can throw him so BE CAREFUL,” but apparently not.

Mary pops in through a secret passage. Claire tells her to go outside and warn Munro about the trap while Claire sneaks out through the kitchen. Mary is horrified. Go OUTSIDE?? At NIGHT?? And speak to a BEGGAR?? Claire, exasperated, leaves her there and goes to the kitchen on her own.

Of course the bad penny is there, so Claire is stuck. They sit and eat and talk about old times. Mary appears and the Duke sends her off to bed. But suddenly she grows a spine and sneaks outside. Munro kills an English soldier and she gives him the message, then she has to distract the Duke’s nasty valet while Munro hides the evidence and scampers off. 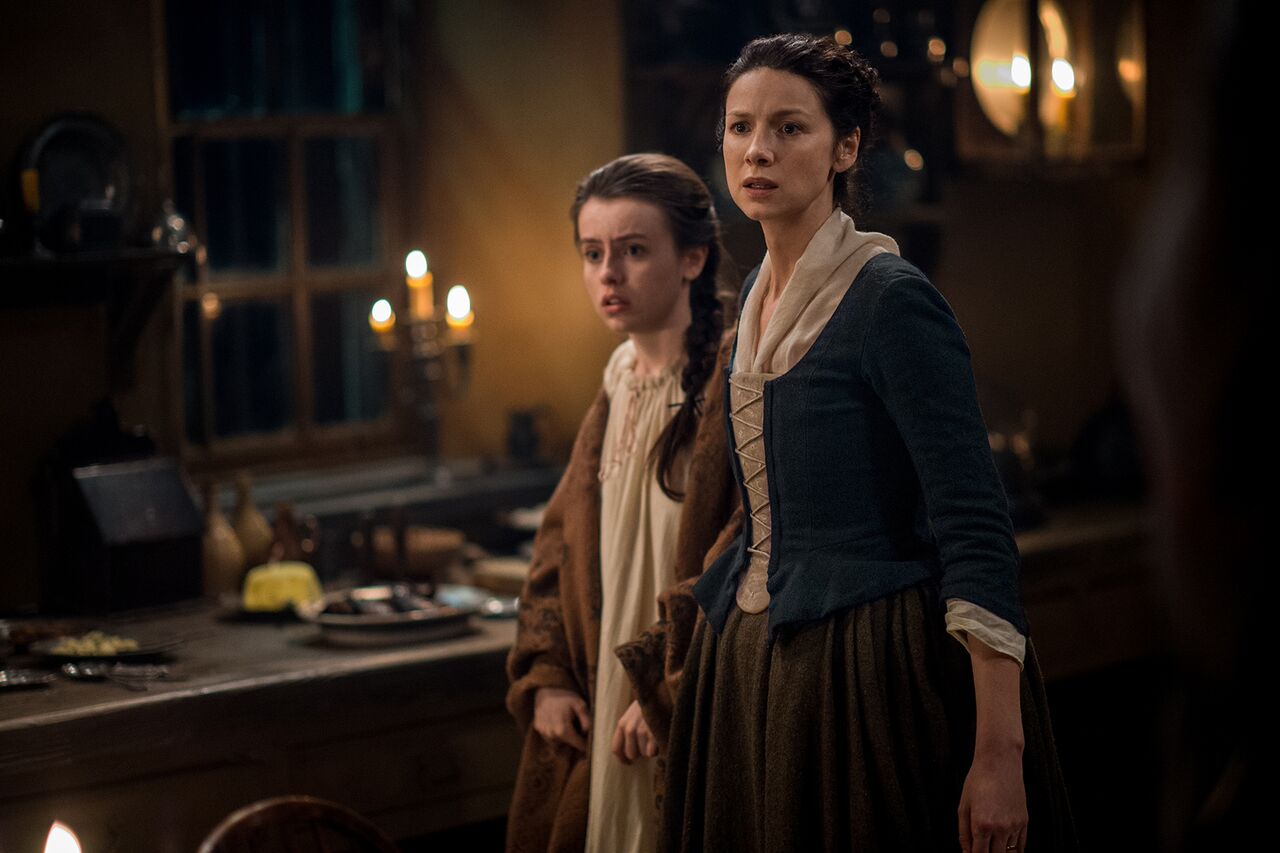 The valet drags her back to the kitchen and tells the Duke she was trying to go outside. He orders her to bed again, and just then Murtagh and Jamie burst in. The Duke…puts on his wig because I mean. Some things are important. And the valet holds a knife to Claire’s throat.

Claire tells Jamie and Murtagh that he’s the man who attacked them in Paris, and the Duke ordered it. The Duke claims it was all the Comte’s idea, but Claire calls him out on it. “Rape was your idea!” He admits it, and Mary stands off to the side looking horrified.

Claire manages to get the valet off of her, and Jamie punches him pretty good. It’s Mary who does the deed, though, stabbing him in the stomach when he tries to stand up. The Duke begs for his life, but Murtagh uh. Gets violent. With an axe.

He then presents the Duke’s head to Mary and Claire. “I kept my word. I lay my vengeance at your feet.” 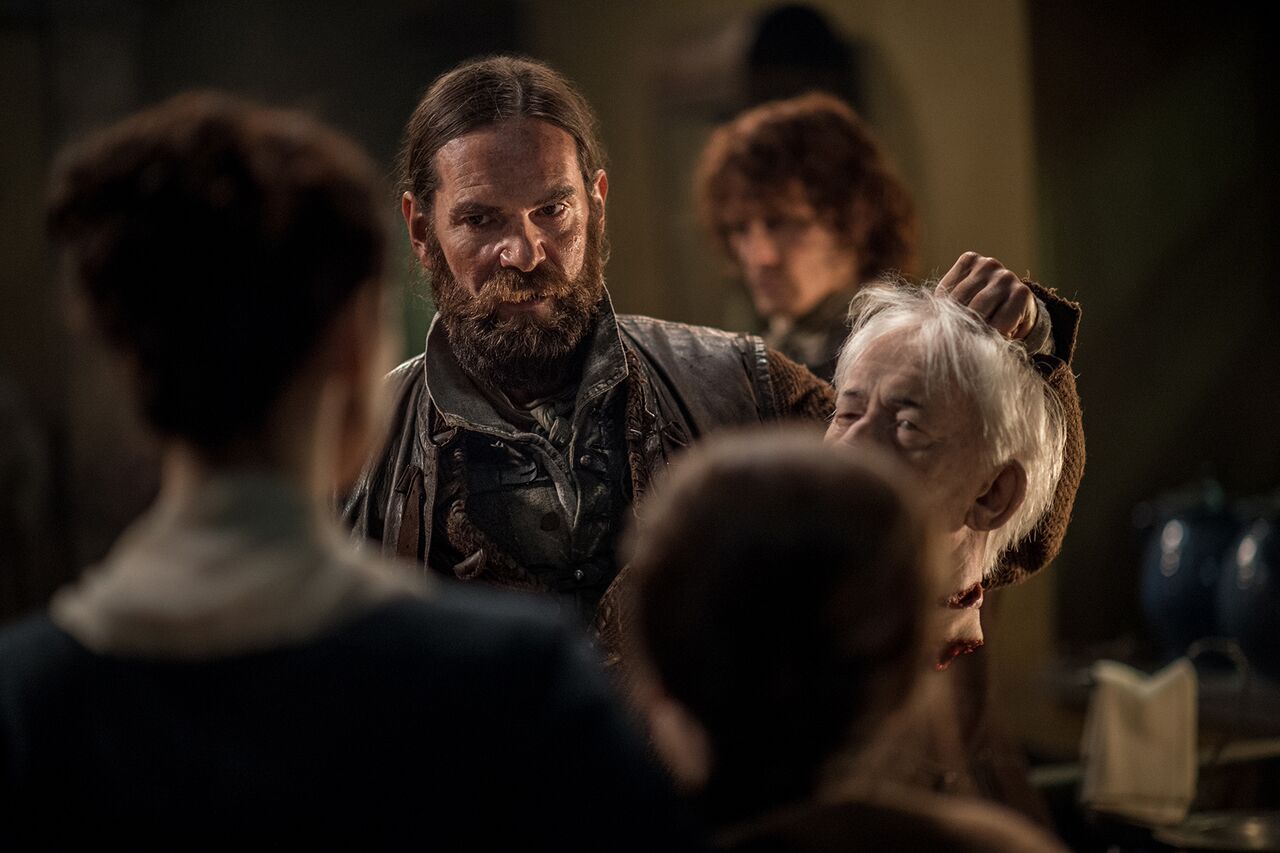 Whew. This entire episode, as the title suggest, was about the Duke. The stuff at the beginning was just set dressing: the whole point was to have those final pieces fall into place, and to see Murtagh get his promised vengeance. The title card showed a wig being powdered, and the wig toppled to the floor. As my mom said, “that was some foreshadowing.”

Murtagh was horrified by the attack on Mary and Claire, and I was glad they didn’t leave that plot point dangling. He’s Jamie’s constant companion, and though he jokes with Jamie about regretting taking Claire to wife (“not even for a moment,” Jamie says), it’s clear he loves Claire nearly as much as he loves Jamie.

I have to be honest with you: I wasn’t expecting the bloody ending. I thought, I don’t know. They would turn the Duke over to the Redcoats somehow and expose his treason? That wouldn’t’ve been very practical since Jamie is a wanted man and the British don’t exactly have any love for Highlanders or Jacobites.

Murtagh’s vengeance was brutal and, uh, kinda nasty, but it was fitting. He’s a Highlander. He’s not gonna challenge someone like the Duke of Sandringham to a duel: he’s gonna chop his head off in his own kitchen, and then present the head (wig-less) with an elegant ceremonial bow.

It will be interesting to see what, if any, repercussions this has. He was a Peer of the Realm, after all…even if he was suspected of treason.

Couple of quick notes: I love Murtagh. It was nice to see Charles show some spine as he yelled at his generals for not supporting his London campaign. The road between that church and Belmont must’ve not been very long because it was pretty easy to find people in the middle of the night to deliver messages.

Episode Grade: this was very suspenseful! I gotta say A.