[content warning for discussions of violence, rape, and PTSD]

The title of this week’s episode is the Fraser family motto, which translated to I am ready. I can tell you guys, after my long absence and several missed episodes, I am READY to dive back into Outlander!

A super brief recap of how we got to this point:

Jamie and Claire left Paris after various tragedies and misadventures, including the stillbirth of their child, the death of Comte St Germaine, and Jamie’s imprisonment for dueling with Jack Randall. After all that nonsense they decided to give up on their plan to thwart the Jacobite rebellion, and instead return to Scotland to help the Scots win.

They convinced Jamie’s grandfather to pledge some Lovat men, but Colum MacKenzie believes the rebellion is doomed to fail and refuses to pledge the Mackenzie clan. Dougal, as his war chief, brings his men, which amounts to like…five dudes. But anyway. 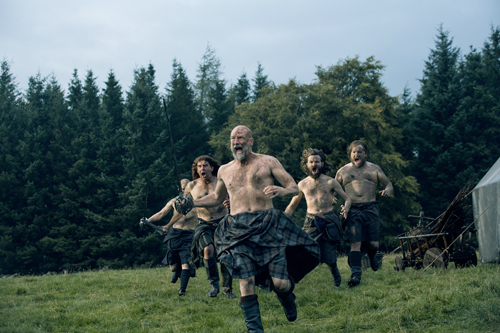 The episode is, in many ways, a “filler” to get us from the early events in Scotland to the actual rebellion. Despite that, it still feels like a necessary episode: Claire knows exactly what the Scots will be facing, and she’s drilled that knowledge into Jamie’s head. Now it’s Jamie’s job to … okay, I gotta resist the urge to quote Hamilton … whip these farmers, smiths, and other non-soldiers into some semblance of an actual army.

There’s some tension between Dougal and Jamie, as Jamie (by the Prince’s order) is the commander of the army, but Dougal is used to always being in charge. There’s a wonderful scene where Claire cuts Dougal down to size, calling him a narcissist who’s only there for his own glory, not Scotland’s. He tells her that she may be right; maybe he is too in love with himself; but the one thing he loves more is Scotland, and he will do anything for his country.

It seems as though Claire’s comments make a difference, because after that he isn’t as difficult with Jamie, though you can tell he wants to be.

Dougal isn’t the most likable character on the planet, but I’m glad Graham McTavish is back. He’s a fantastic actor who brings so much to the role, and you can see his battle between his own ego and his love and king and country in nearly every scene.

Claire, meanwhile, is suffering through some serious PTSD flashbacks. She keeps remembering a couple of young American soldiers she knew back during the war. They ended up at her field hospital because they were separated from their unit after D Day (those of you who’ve watched Band of Brothers know all about that particular issue), and as the flashbacks unfold we learn that they were killed in a German ambush.

Terrified of being killed (or worse), Claire hid in a ditch while the men died out on the road. There were Germans everywhere; there was literally nothing she could do to help them; but the event still haunts her. Now, seeing these men training for war, she’s reminded strongly of the young American boys, and she tells Jamie that knowing the men who will fight and die makes it even worse. He offers to send her back to Lallybroch, but she refuses. She has to stay, she says, because leaving would be just like hiding in that ditch again.

Jamie promises her that no matter what happens, she will always be protected. Honestly the way he looks at her with such pride and admiration when she tells him why she can’t leave the army is like…be still my heart. The chemistry between these two is maybe the best thing about the show. 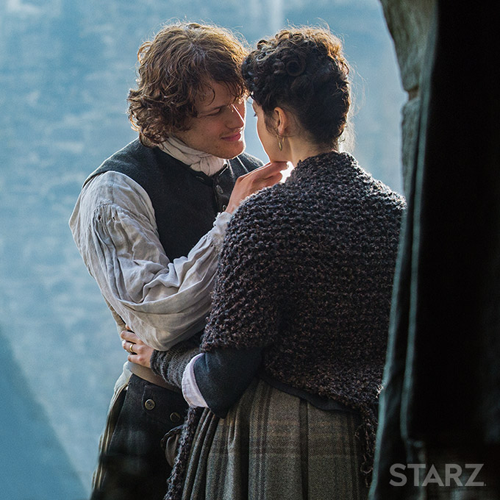 Later, Jamie is peeing when he’s suddenly attacked from behind. It turns out to be a young English boy, age 16, who introduces himself as William Grey. He says he saw their fires and snuck into the camp, and recognized Jamie as the “unprincipled and traitorous rebel” Red Jamie.

Jamie is on the verge of torturing information out of him when Claire appears. She reads the situation immediately and pretends that she’s being held against her will. She offers to give herself to Jamie if he frees the boy. Jamie plays his part, suggesting that he’ll ravish Claire and then give her over to his men. The boy is motivated by his gentlemanly honor and spills the beans to save Claire’s virtue.

It turns out there’s a camp 3 miles west that has cavalry, cannons, and a bunch of English soldiers. Jamie leads “20 good men” (okay I mean not really, but c’mon) to the English camp. They steal the wheels off of all the cannons and burn them. Really, it was a job well done, and Jamie’s makeup job was pure Winter Soldier chic: 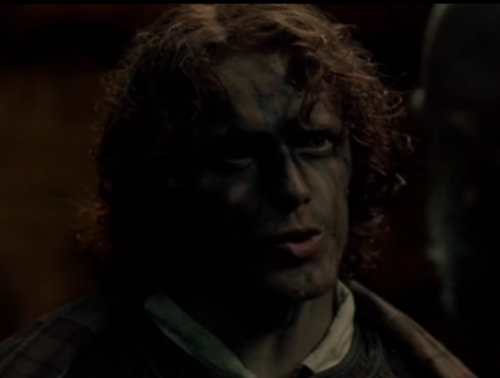 Once they return to camp, the army marches (yes, actually marches this time; they’ve learned well) to join with Bonnie Prince Charlie’s main army. The episode ends with Jamie asked Dougal to announce them to the Prince, and Jamie telling Claire “there’s no turning back now.”

Like I said, sort of filler…but still important. It was good to see Jamie and Dougal (and Dougal and Claire) work through some of their old issues. It introduced a character who will be important down the road; William Grey; and we got to explore some of Claire’s PTSD leftover from the war. This show doesn’t shy away from showing the effects of trauma, which is incredibly important.

It was a good episode to return on, since not a lot happened. I’ll hopefully be back later in the week with a recap of what we missed, and I’ll be here next week, same Bat time, same Bat channel, for episode 2×10!

Overall Grade: A-, the minus just because not a lot happened to advance the actual plot. It was more of a “touching base” episode to reset the board.