What a wild rollercoaster of episodes! When we left episode 4, Dougal had ordered Claire to accompany his party on their rent-collecting duties around Mackenzie lands. I honestly can’t tell these guys apart a lot of the time. I know Dougal and Jamie, and then there’s a guy named Angus, and the lawyer Ned Gowan, but other than that they all look alike. 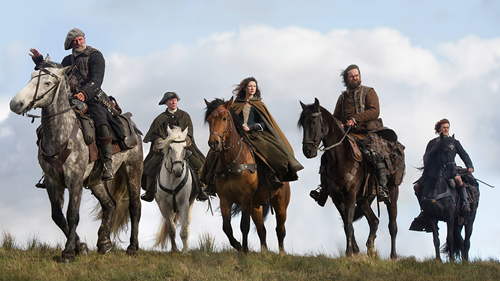 Claire and Ned bond over poetry. Claire feels isolated from the Highlanders; they speak Gaelic to exclude her from conversations and treat her like a prisoner. In one village Claire wanders away to spend some time with the village women, and when Angus (I guess??) finds her, he drags her back to the group. She’s a little drunk, and she tries to take back a goat the men have received as payment for taxes. She explains that one of the women she met has a baby going hungry because of losing the goat. A crowd gathers, and Dougal makes a joke in Gaelic about her being a “crazy Sassenach.”

The town blacksmith, an Englishman, comes to ask if Claire is okay. The men assure him she’s a guest of clan Mackenzie and insult him. The camera follows him back to the smithy, where he dons the red coat and tricorne hat of an English soldier.

That night the villagers and Mackenzie men gather in the local alehouse. The men are speaking Gaelic, and Claire believes Dougal is extorting the villagers for protection from the English. He rips Jamie’s shirt off to display his scarred back, and money starts pouring in. 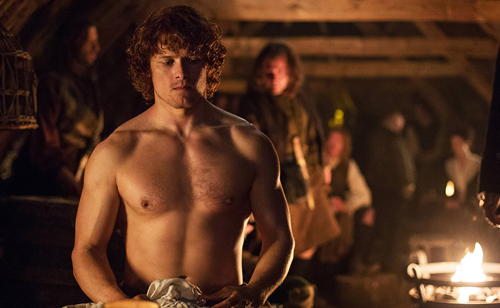 Jamie’s back on display

Claire is furious. When she confronts Ned about Dougal’s supposed thieving, he doesn’t deny it. They continue their journey: taxes by day, Dougal’s speeches by night. Jamie is increasingly humiliated by being Dougal’s show and tell, but after the first night he removes his shirt himself.

One day the group encounters two Highlanders strung up on wooden Xs. They’re dead, and Ts, for traitor, have been carved into their chests. They cut them down to give them a proper burial, and that night Jamie is spared when Dougal describes the dead men instead.

Claire finally realizes that Dougal’s nightly performances have nothing to do with extortion. He and the Mackenzie men are raising money for the Jacobite cause. They want to bring the Catholic Stuart king back to England to overthrow the Protestant George II. Claire knows how poorly the Jacobite Rebellion of 1745 went, and she makes it her new goal to stop it before it can happen.

They pass through Culloden moor and Claire remembers visiting the monument with Frank in the future. Frank describes the horrific battle that took place there in 1745: the Scottish Jacobites were slaughtered by the English, and afterwards the Crown banned tartan, bagpipes, Gaelic…basically everything that made Highland culture what it was.

The next morning some men are speaking Gaelic as Claire and Ned eat breakfast. It’s clear they’re talking about Claire, and suddenly the Mackenzie men attack them. A huge brawl erupts, and after it’s over Claire’s patching everyone up. She’s furious. One of the men tells her the guys were calling her a whore. “We can insult you, but no one else can,” he says. She’s touched, and after that she’s much more at home among the men.

The episode ends with the same Englishman from earlier, now in uniform with a group of soldiers, finding Dougal and Claire near a stream. He asks her again if she’s under duress, and the episode ends.

Episode 6 opens with Claire assuring him she’s well, and a guest of Clan Mackenzie. He tells her his commander would love to speak with her anyway, and she and Dougal ride with them to the nearby garrison outpost. 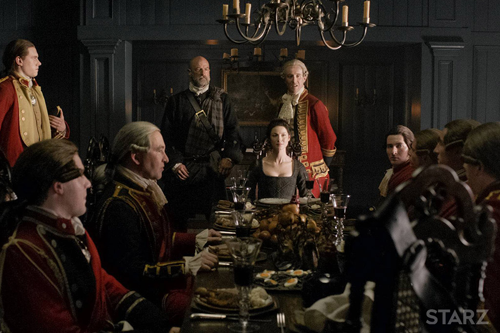 The general is a typical English snob. He’s cordial to Claire, but mocks Dougal’s accent and insults Scotland and Highlanders in general. Claire speaks up in their defense, shocking the men, and Dougal withdraws to the pub downstairs to drink.

Abruptly the door flies open and in storms Black Jack Randall. Claire is less than thrilled to see him. While he’s warning the general that Dougal Mackenzie is downstairs (as if he doesn’t know), some of the soldiers outside are shot.

Claire rushes to help, and after amputating the soldier’s arm, she returns to the dining room. The general and all his men are gone, leaving Claire alone with Jack Randall.

What follows is an incredibly intense battle of wills. Jack tells her the story (complete with flashbacks) of how he flogged Jamie. It’s clear this man is NOT WELL; a complete sadist. He describes flogging Jamie nearly to death as a beautiful experience that no one else understood.

Claire is understandably grossed out, but she’s hopeful. She tells him there’s hope for him to change. He seems to accept her words and offers to have her escorted to Inverness. She stands to thank him…and he punches her in the stomach, hard, so that she doubles over.

He tells her he doesn’t want or need her pity and punches her again. She falls to the floor, and Randall encourages the other soldier to kick her. He does, tentatively at first, but under Jack’s taunting his blows get stronger.

Dougal bursts in and demands Randall release Claire. He says she’s wanted for questioning, but Dougal insists that she’s a guest of Clan Mackenzie. Randall releases her, but tells Dougal he must return her to the fort by a certain date or he and his men will be wanted by the Crown.

Dougal and Claire ride away, and Dougal tricks Claire into drinking from a “truth spring.” He asks her if she’s a spy, and she once again assures him she’s not. This time he believes her, and he explains that he could keep her safe from Randall and the English IF she were an official member of the clan. By marriage.

Claire is horrified, believing Dougal means to marry her, but Dougal assures her, no. He means Jamie.