When we talk about the Skywalkers, we usually think of a few names in particular. Prequel stans (like me) will talk about Anakin Skywalker, the tragic hero whose complete devotion to the ones he loved drove him into darkness but ultimately redeemed him. More traditional minds think of Luke Skywalker, the farm-boy from Tatooine who saved the Jedi Order, or Leia Organa, the princess of a destroyed planet who lead the rebellion to victory against the Empire. The newest fans will think of Kylo Ren, the grandson of Anakin Skywalker, born as Ben to Leia Organa, the new face of a renewed Dark Side. Yet with these four hogging the limelight, it is easy to forget the two members of the family who were just as brave, strong, and good as the others but are always forgotten: Owen and Beru Lars, Luke’s foster parents. 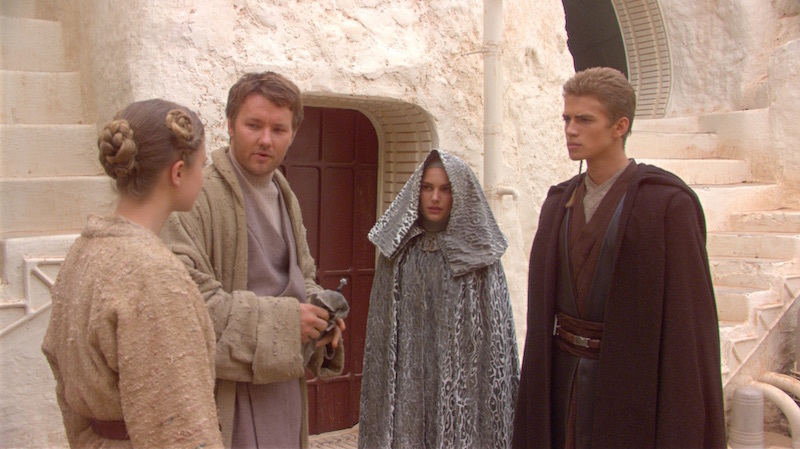 This movie was a font of wasted potential.

For one thing, it must be said that Owen and Beru are incredibly kind, open-hearted people. Their one meeting with Anakin Skywalker is when he appears on Tatooine in Attack of the Clones. They interact very little before Anakin goes off to find Shmi, and very little afterwards when Anakin returns with her body. Yet three years later when Obi-Wan shows up at their door holding their infant nephew, they enthusiastically take him in and raise him as their own. That is a remarkably good thing to do, especially given the fact that Owen in particular did not like Anakin.

When Owen and Beru talk about Luke leaving in A New Hope, Beru says that Luke “has too much of his father in him” to stay on Tatooine as a farmer. Owen then replies darkly “That’s what I am afraid of.” His response seems oddly somber, considering their knowledge of Anakin probably came from tales of his heroism in the Clone Wars, so why the tone? If Luke is like his father, that means he is adventurous, charismatic, and caring, if a bit prone to wandering. Why would that be a bad thing, even to Owen, a salt-of-the-earth farmer? I bet that Owen found the remains of the tuskens that Anakin slaughtered. Think about it, Anakin travels only a few hours away from the homestead to find his mother, and as a moisture farmer Owen must regularly ride out to survey his holdings. That many dead bodies would undoubtedly start to smell, so Owen probably found them, noted the coincidental timing of Anakin’s arrival, and made the connection. Suddenly, having a son who is too much like his father is a terrifying prospect.

Still they both raise Luke and apparently raise him well. Something that people do not realize about life on a farm is that death is everywhere and in ways that most people do not understand. Animals that the farmer has raised from birth must be harvested for meat, sometimes the stock falls ill or gets hurt and must be put down, even eggs hatching can go horribly wrong. The Lars family farms moisture, though, which is much more akin to vegetable farming, but that too is fraught with death. Animals (and sometimes people in wilder areas) present a threat to the stock. Luke packs some substantial heat in ANH, evidence that the Lars family must often defend their livelihood. Farmers like the Larses therefore know how to think about the bigger picture: the death of another is definitely worth the safety of their livelihood and family.

Somehow, Luke manages to avoid this attitude. For all his whining and dreams of moving on from Tatooine, Luke stays on to help his family. From this we can see that Luke is a thoroughly good person. He is good to a fault, jeopardizing his own safety and overall safety of the Rebel Alliance for the sake of the ones he loves. That kind of blind selflessness is not inborn, it is learned. The Larses certainly taught him to be different, to appreciate life in every way that he can. Perhaps this was aided by his nascent Force sensitivity, but it to have convictions that strong definitely stems from a good home environment.

In fact, it is this love for Luke that saves his life. The fact that the Lars family died protecting Luke is often overlooked. When the Empire arrived looking for R2-D2 and C-3P0 they were taking no prisoners. They slaughtered an entire community of Jawas in their search, and then they showed up at the Lars homestead. Owen and Beru both knew the droids that they were looking for, but more importantly they knew who the droids were looking for: Obi-Wan. Yet the stormtroopers never arrive at Ben’s hovel, and the comics show us that the house remains intact long after the events of ANH. We must conclude that, for all the Empire’s methods of interrogation and coersion, Beru and Owen never broke; they looked death in the face and never told them where to look, thus saving Luke’s life and giving the rebellion a chance to succeed. Their bravery ended with their deaths, and it was this tragedy that led Luke to join Obi-Wan and save the galaxy.

So if these two are so important to Luke’s life and personality, and to Star Wars at large, why is everyone so keen to forget them? There seems to be this prevailing view, in fiction especially, that family is only blood, and that despite a lifetime of separation or even not knowing one another people who share ancestry have some deep emotional connection. Star Wars is particularly guilty of this; after learning that Darth Vader is his father, Luke’s sole mission becomes the redemption and salvation of Vader. Luke’s reaction to the revelation in The Empire Strikes Back is warranted, since he has based a lot of his self image on the idea that he is avenging his father’s death, as well as Obi-Wan’s, Owen’s, and Beru’s, and yet by the time of Return of the Jedi Luke seems to have forgiven Vader for all the aforementioned deaths. It seems pretty bogus to me, but perhaps Luke is a kinder person than I am. Perhaps Anakin owes his salvation to the poor farmers of Tatooine too.