On “Chapter Nine: La Grande Illusion”, Archie is convinced to escort Cheryl in a family tradition, Veronica tries to help out Ethel while Alice is still dealing with Polly choosing to live with the Blossoms.

Jughead narrates about the Blossoms omnipresence in the Riverdale lives as they are the main producers of maple syrup in town—is Riverdale set in Canada?—but their legacy might be at stake after Jason’s death: with the heir gone, Cheryl is seen as less suited to become heiress. Now, I don’t claim it all on pure, scented sexism (even if it sort of did walk like a sexist duck and quacked like a sexist duck…) and say that the Blossoms apparently think that Cheryl might not be a valid option because of, as Clifford says later on, her “erratic behavior”. So, as they think the empire is fragile, other members of the Blossom family/board of trustees flock to Riverdale to sort this out. 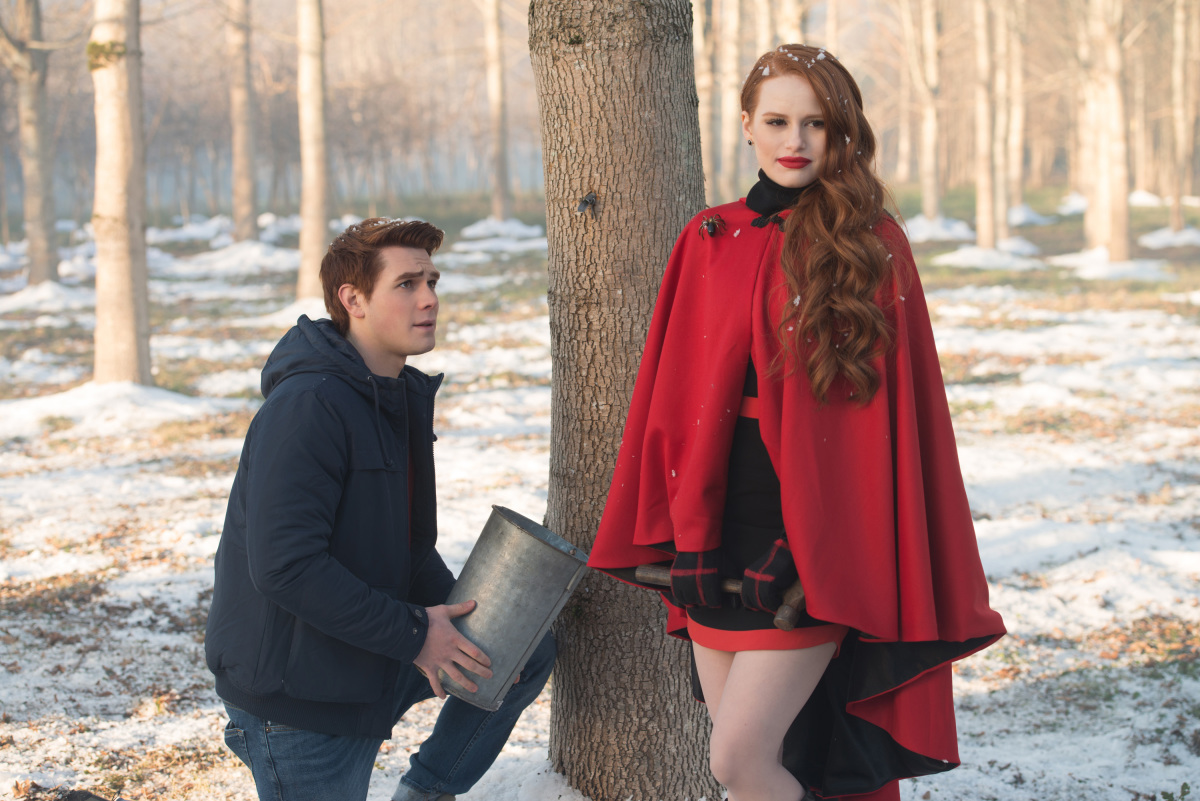 Alice wants to write a scathing story on the Blossoms because that will make her feel better. Lawyers will descend on the Lodges  soon to take statements about Hiram’s hearing and they might have to lie to make him look better when it comes to his business. Veronica suggests to her mom that it is time for her to tell Freddie Andrews that she is the anonymous buyer of the land. Cheryl asks Archie to escort her to the Blossoms’ tree-tapping ceremony as she used to go with Jason. Archie refuses because, apparently, Val became his official girlfriend off screen.

Ethel reads a dark poem in class and, fearing she might 13 Reasons Why herself as she took it as a potential sign for suicide, Veronica decides to step in. Turns out Ethel’s parents have been arguing a lot and Ethel doesn’t know why. So, Veronica asks her (and Kevin) to go over for a pampering lunch. Ronnie also tells Kevin that she once bullied a girl so hard that the girl had to transfer schools, so now she wants to carry on with her “being a better person” decision.

Mrs. Blossom talks to Archie about the tree-tapping ceremony and low key bribes him into going with Cheryl with promises of putting in a good word with the board of admissions of a great summer music program he has his sight on. Therefore, Archie concedes into going with Cheryl. Betty asks Archie to talk to talk to Polly while he’s over at the Blossoms because she had been ignoring the Coopers. With Archie’s help, Cheryl is able to perform the tapping of the tree.

At the Lodge’s lunch, Ethel says that their parents are going through financial problems and might have to sell the house. Hermione tells Veronica that Ethel’s family lost the money when they made business with Hiram. Archie defends Cheryl’s honor when some of the trustees were gossiping about her “crocodile tears” at Jason’s memorial. Hermione tells Freddie about owning the land and, as expected, it doesn’t go well. Mr. Blossom asks Archie to escort Cheryl to a family banquet.

Archie tells the Coopers about what went down and the potential hostile takeover which leaves Alice with great prospects on her story—she also resents Polly’s betrayal. Betty asks Cheryl to tell Polly to call Alice. Also, Polly is having twins.

Veronica gives some of her chic clothes to Ethel, but she tells Veronica that it is not necessary as she just wants to be friends. Speaking of gifts, Cheryl drops by at the Andrew’s residence and gives Archie an ’84 Les Paul. 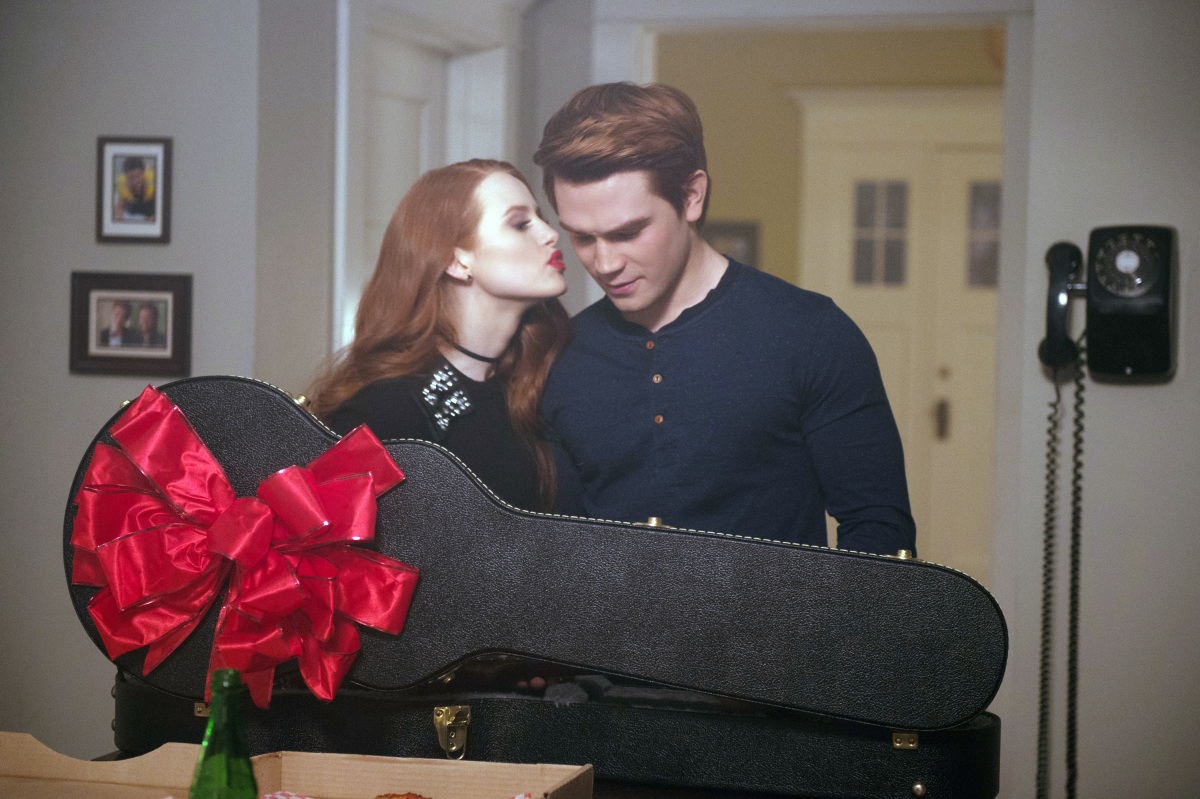 Alice hands out Hal, her husband and also boss, the exposé on the Blossoms. However, after an apparent complete 180-shift in personalities from last episode, Mr. Cooper not only won’t publish the story, but also fires his wife without fair cause. As she leaves, Alice throws a rock at the newspaper’s glass window, shattering it. Archie asks Mr. Blossom to help out his father instead of helping him.

Kevin tells Veronica that Ethel’s dad attempted suicide and she runs crying into the bathroom, where she shatters the pearl necklace her own dad had given her. At the banquet, Mr. Blossom tells Archie that he will help out with his dad. There’s an implied catch though: Clifford says that Cheryl might only inherit the business if a strong(er) hand, like Archie’s, is there to guide her. Polly interrupts the conversation to tell Archie to tell Betty to back off as she thinks the Blossoms are involved in Jason’s murder and she is there to investigate.

Veronica goes to the hospital to visit with Ethel and her mom and ends up telling them who she is. This kind of left me baffled because, apparently, Ethel didn’t know that Veronica’s dad was responsible for her family’s downfall. Nonetheless, Ethel’s mom is really rude to Veronica because of what Hiram did.

Archei finds Cheryl, who had stormed off before, by the pool. Cheryl talks about how she doesn’t cope well with her family hating on her. The conversation ends with Cheryl kissing Archie and him leaving almost right away. Doing so, he walks past the Blossoms talking about how they are responsible for sending Hiram Lodge to jail.

Veronica tells Hermione about what had happened to Ethel’s dad and she claims she is done lying for Hiram. Cheryl catches up with Archie and threatens to take away all the “gifts” he has received/will receive from the Blossoms if he does leave, which he ends up doing anyway.

Betty tells Alice about what Polly told Archie and Mrs. Cooper is incredibly relieved because she hasn’t lost Polly after all. Betty says that she should come write her story for the school’s newspaper. 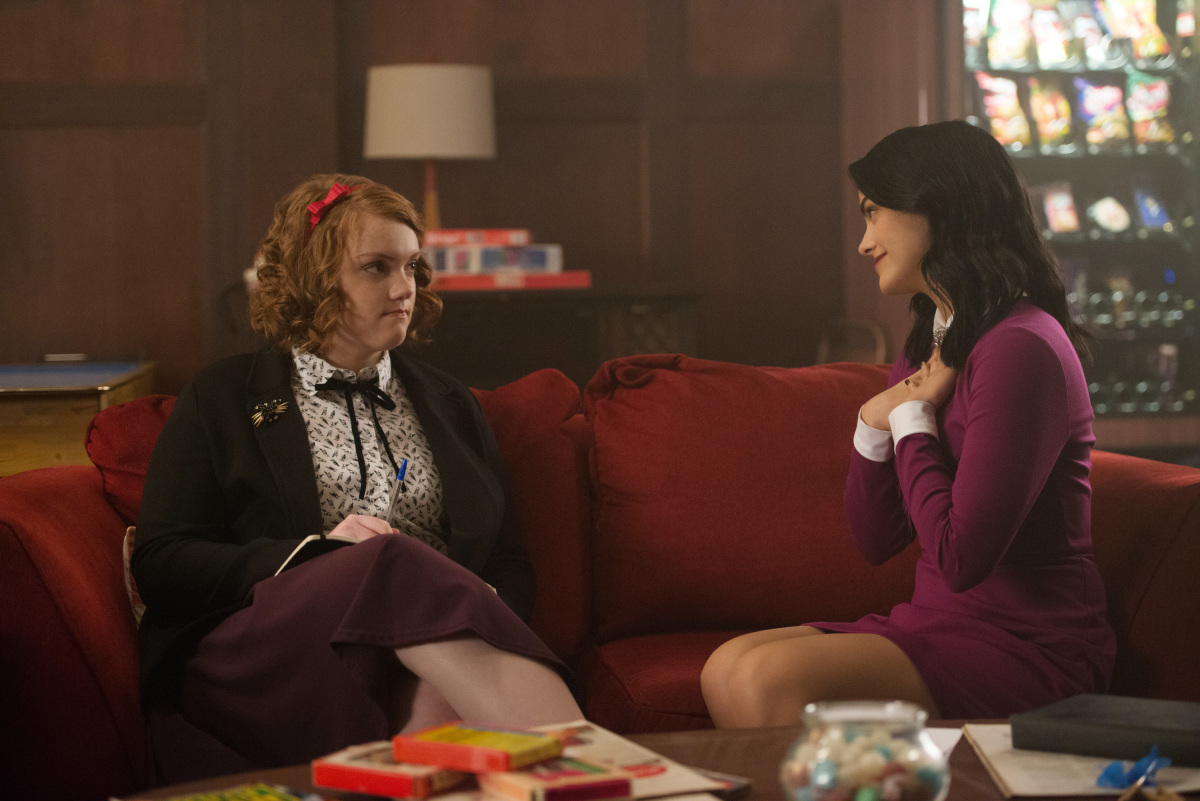 Archie meets up with Val who breaks up with him with claims of being ignored and his “businesses” with Cheryl. Freddie breaks up his romantic endeavors with Hermione, but will keep the construction deals with the Lodges, upping his share and profits for the company while at it. Veronica finds Ethel in class and apologizes once again for what the Lodges had done to their family. Unlike her mom. Ethel is kind and friendly because she understands Veronica had no blame.

As Archie told Jughead and Betty about what he overhead the Blossoms saying, Juggie adds “Hiram Lodge” to the board of suspects of Jason’s murder because that would be motive. Jughead’s looming narration also explains that Cheryl is a coming storm as she erases both Archie’s and Polly’s faces from a picture they had taken before.

So, what was that? I know I complained last week about a drop in quality, but this week it actually felt somehow worse? I mean, the show is not terrible, but I definitely feel like it has lost a bunch of steam from earlier episodes. I also have barely said anything about Riverdale‘s editing, cutting from side plot to side plot really fast, but it is really giving me whiplash lately—it’s like the show can’t focus on a subject for too long and it is turning my enjoyment way down.

Now for the plot itself, I’m at least glad that the adults didn’t get as much as last week, but it still didn’t feel quite right; I am really starting to think that Riverdale is at its best when it is trying to solve Jason’s murder. As much as I hate to see Cheryl being snubbed by her own family on her inheritance, it is also hard to *truly* empathize because she rarely does something nice without doing three or four “bad deeds” first. I like to think that this is mostly because of a likely loveless childhood with her only anchor dead now, but the fact that Cheryl is going to be villainized even further in future episodes does not help one bit. 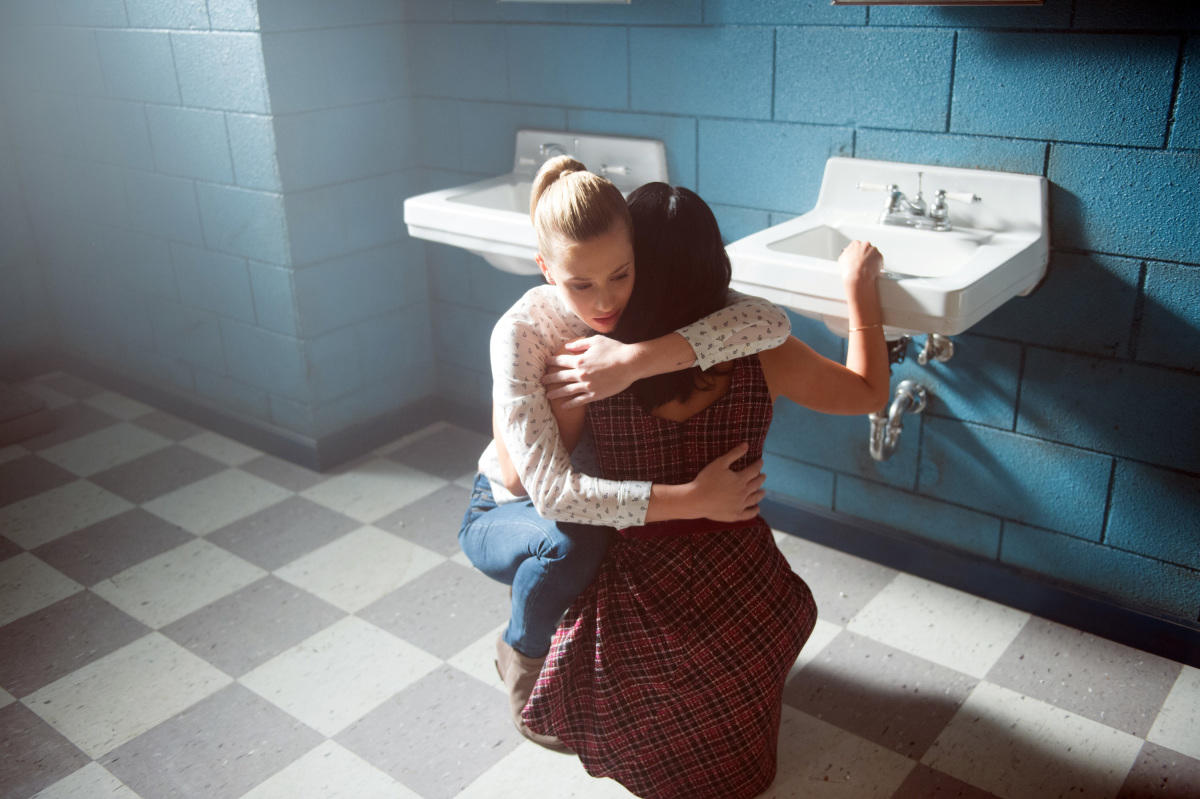 As I said, I thought it was extremely off that Alice now became the vengeful Cooper while Hal, who had feuded with the Blossoms for ages, didn’t want to run the story bad mouthing them. To me, it would make much more sense if the roles were reversed. One can argue that Alice was doing that because she was hurt by Polly and that Hal was acting out after being thrown away from home, but there’s also the fact that I don’t see why Hal would turn away a story that could damage the Blossom’s reputation even if it came from Alice. Plus, there’s Betty who is supporting her mom on her ‘revenge-ish endeavors’ which I guess is just her acting on her overzealous care for Polly.

I think I got used to TV shows making a big deal out of the beginning of relationships, never missing a chance to show the “will you be my boy/girlfriend?”, so that hearing about Val and Archie being a couple (and also Betty and Jughead, because this happened to them too) threw me off at first, but it wasn’t a big deal—the two had had their moments in recent episodes, so it’s fine. Then, with Val breaking up with him, it barely leaves me a chance to even care enough about the relationship to properly feel something.

From future episodes’ descriptions, I know that Archie will try to get Val back, so I’m looking forward to seeing them actually being a couple for more than a few sparse scenes.