After what it seemed to be an eternity since it was announced, the adaptation of the popular Archie Comics, Riverdale, is finally here. And it’s true to its description as a “mix of Twin Peaks and Gossip Girl” even if I only barely know these two shows. It starts off by being the murder-high-school-drama show that we have been looking for. 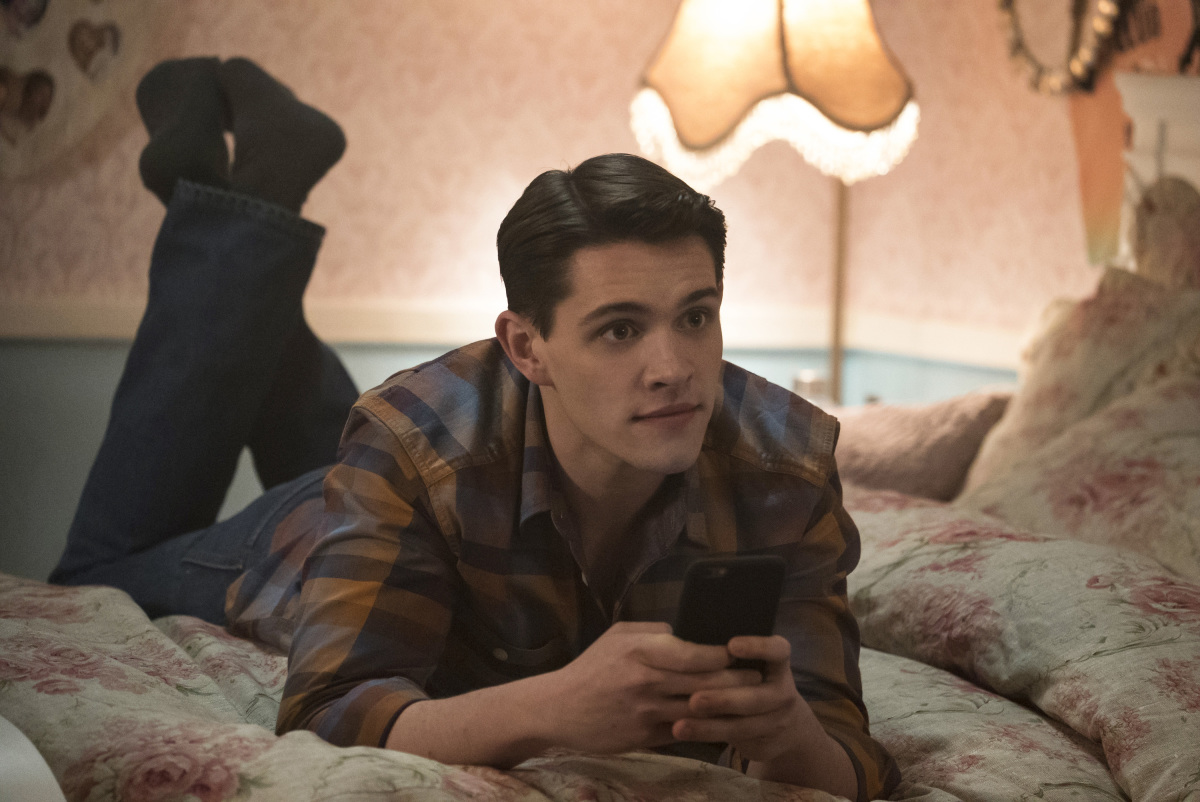 It’s the day before the first day of school after a summer that had water polo captain Jason Blossom missing and presumed drowned. Jughead Jones’s narration drives us to the restless Betty Cooper talking about her crush Archie Andrews with her gay best friend Kevin. Turns out Archie is the boy next door and, naturally, he makes his first shirtless introduction before the five minute mark, proving that 19 year old KJ Apa works out a lot. It reminded me of Taylor Swift’s “You Belong With Me” music video. Only at the CW, but what can I say? I’m a sucker for their shows.

Archie and Betty have some sort of catch-up date at Pop’s, the local cool restaurant. During the conversation, Archie tells Betty that he wants to pursue a music career despite trying out for football. Betty is cut short, just as she is about to tell Archie her true feelings, when newcomer Veronica Lodge arrives. She’s fresh from New York and looking for a new beginning after her father was arrested for some white collar crimes. Archie sees her and is semi-hypnotized. Soon enough, all three of them are talking and we can see Betty’s frustrated jealousy.

We meet Betty’s mom, Mrs. Cooper, and get some backhanded exposition. Betty has a sister Polly who ended up involved with some guy and it brought out a very protective side in Mrs. Cooper. Making you guys’s jobs easier, I’m going to spill it and say that, by the end of the episode, the total exposition amounts to Polly having a relationship with Jason that ended badly. Polly cared too much for Jason, but it wasn’t reciprocal, and she is in a group home now.

Finally, it’s the first day of school for our sophomore protagonists and Archie is getting roasted by his friends after bulking up over summer. He worked construction and may have even “hit on a cougar” to which Archie won’t admit.

Betty is showing Veronica around the school and the newcomer only wants to know about the social life. Thankfully, we have Kevin to succinctly explain it to her that Riverdale is quasi-boring with the exception of the gay bar called Innuendo and HBO on Sunday Nights. (I’m gonna tell myself that’s because of Westworld and not Game of Thrones knowing full well that it’s not). Veronica is instantly enticed by the opportunity of having a gay best friend and literally says “let’s be best friends”. Oh, also, everyone knows that Veronica’s dad is a criminal.

Archie goes to an intimate rehearsal of “Josie and The Pussycats” to offer them songs he wrote. Josie says the band is building a brand and will stick to their own creative work.

Apparently, because of Jason being missing/presumed dead, the semi formal might be canceled, but that is saved by Designated Girl With Bad Attitude ™ Cheryl Blossom, Jason’s sister. She insists that Jason would not have wanted the back-to-school dance to be canceled, so it isn’t.

Thankfully, the narrative does us the favor of clarifying that Archie had a little fling with the music teacher from Riverdale High, Mrs Grundy when both of them share a look of dramatic significance at the assembly Cheryl’s speaking in. Let’s take a minute for not-acknowledged statutory rape before the title card comes up, guys. Ugh.

Veronica’s mom, Hermione, goes to Archie’s dad to ask for a job in the accounting department (the former employee is on paternity leave, aww). Archie’s dad, Fred, refuses to hire his old friend because the client would be uncomfortable having the wife of an embezzler taking care of the company’s books.

Back at the high school, Veronica takes a seat at Archie’s, Betty’s, and Kevin’s table when they are listening to one of Archie’s songs and actually enjoying it. Apparently, he does have talent. Cheryl takes the opportunity to join the table and invite Veronica to try out for the cheerleaders, the River Vixens. This was the moment I actually realized how high schoolish this show is; it’s crossing out all the clichés in one episode. After some snide comment by Kevin, Cheryl says exactly what I was thinking: “Is being the gay best friend still a thing?”. I laughed, sure, but I’d like to ask that same question to the writers who wrote Kevin this way.

Archie meets up with his rapist, Ms. Grundy, to talk about his music. They end up reminiscing about that one Fourth of July, at 6 AM, when they were out in the woods fooling around and heard a gunshot. They never spoke about that to anyone.

Veronica takes Betty with her to the try outs because Betty wanted to be a cheerleader (it would look good on her college applications), but had been refused the year before. They perform their routine, but Cheryl isn’t too impressed. Or impressed at all. Basically, she just doesn’t like Betty. Veronica tries to save the team and kisses Betty, but that also fails to impress Cheryl, who tries to elicit a response from Betty by mentioning how Jason messed up with Polly. Betty doesn’t react. Cheryl accepts Veronica to the squad after Betty’s politeness, but V takes charge, whips out some one liners and declares that Veronica + Betty is a package. Hooray for Female Friendship!!

At his football try out, Archie is offered a place at the varsity team to replace Jason. He comes up with an excuse because what he really wants is to pursue music. Suddenly, I have a flashback to watching Glee, but that’s interrupted by Veronica and Betty running into Archie. The former pushes the latter into asking Archie to the dance, which he initially refuses, but accepts after some convincing from Veronica. She is apparently the designated third wheel to this friendship tricycle as suggested by Betty. Because when has that ended well in teenage dramas? Still hooraying for female friendship though.

Turns out Veronica is being so nice to Betty because she used to be exactly like Cheryl back in New York and she is pursuing change to become a better person. There’s some more exposition on the Polly and Jason story: according to Betty, “Jason hurt Polly, but it was my mom who broke her”.

After Mrs. Cooper not being supportive of Betty’s cheerleading contrasts with Fred’s support of Archie pursuing music, we finally get to the dance. Veronica spouts a nice “Can we end the jock/artist dichotomy?” and now my Glee ideas are put to rest. Thankfully. 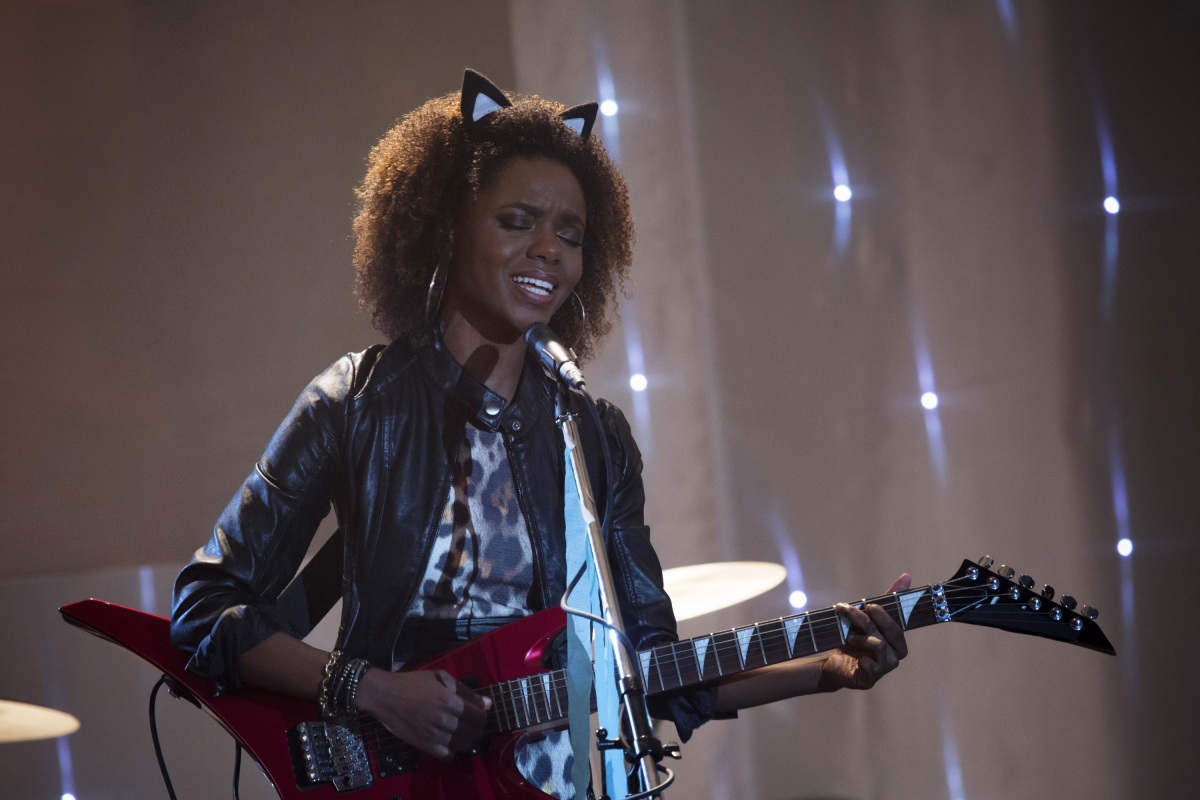 Archie goes to talk to the music teacher, Ms. Statutory Rapist Grundy who is the only available and good music professional in the area. She agrees to teach Archie as long as he doesn’t tell anyone about the Fourth of July. Our golden ginger boy is now not only going after music, but also staying on the football team and helping his dad on the weekends at the company.

Cheryl introduces Josie and the Pussycats at the dance prompting Archie and Betty to slow dance. She finds newfound courage and literally says that now that she’s a cheerleader and he’s a football player, she always imagined them as a power couple. Or a couple, at all (applause to the writer who managed to write this cheesy ass line that manages to feel real somehow). Archie is taken aback, obviously, as he doesn’t have those feelings for Betty. He ends up looking at Mrs. Grundy and not answering Betty.

That leads us to Cheryl being in the mood for chaos and inviting our trio to her after party. Some very inconspicuous Seven Minutes In Heaven is played and Archie is put together in a closet with Veronica. They start talking about Archie’s lack of romantic feelings for Betty, but soon enough, Archie, wearer of Converse All Stars to Semi Formal Dances, kisses Veronica. He also confesses that he may have felt those feelings towards someone else and it’s implied to be Mrs. Grundy. 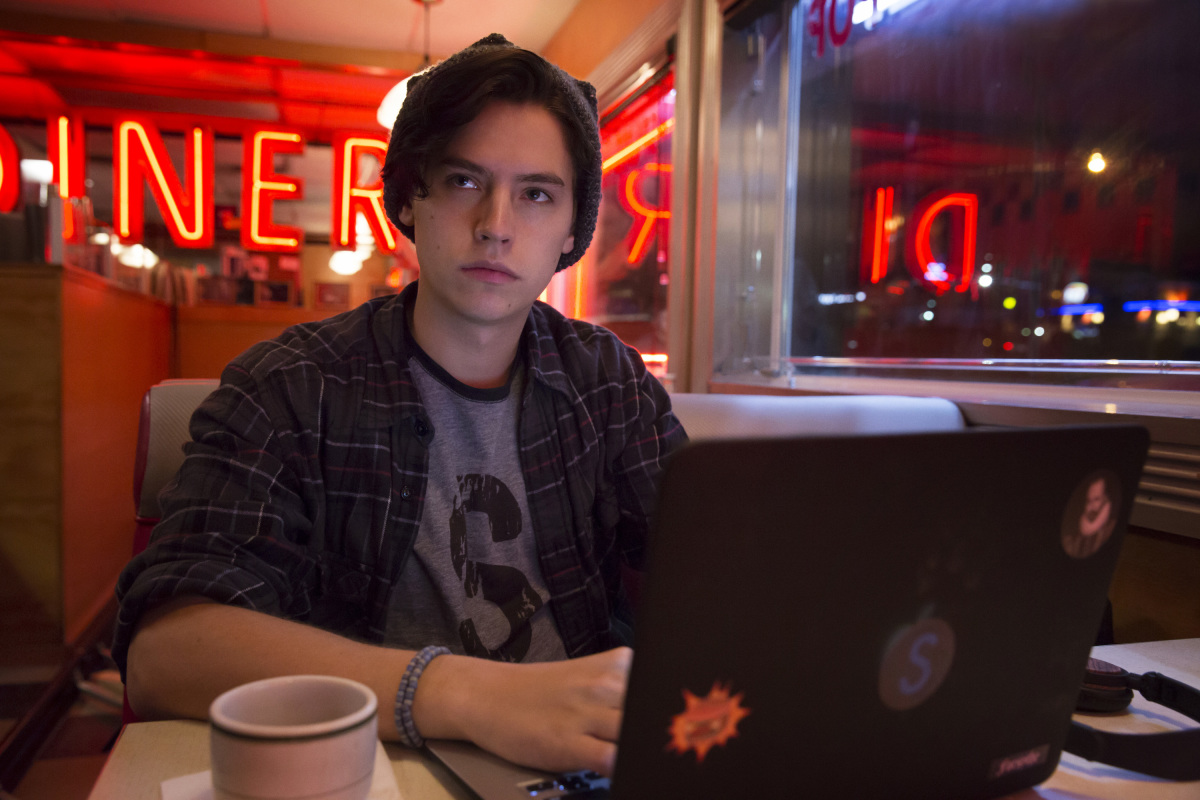 When they got out of the closet, Betty is gone. Veronica goes home and has a tender moment with her mom after all the mess. Archie is tracking down Betty and stops by at Pop’s. There, he sees his old friend Jughead Jones, writing the novel about that very summer. Jughead tells Archie to just talk to Betty about whatever it is that’s going on. Those two clearly have unresolved issues.

Archie finally stops by Betty’s house and definitely says she doesn’t love Betty that way. In his own words “You are so perfect. I’ve never been good enough for you and I’ll never be good enough for you”. It leaves Betty heartbroken.

Our last dip in Riverdale’s river is met with Kevin taking some apparently closeted guy to the woods for some late night skinny dipping. They find Jason’s corpse with a gunshot wound to the forehead, as you do.

As pilots go, this was a good one, I’ll admit it. I did enjoy “Chapter One: The River’s Edge”. Sure, that may come with the territory of being generally invested in high school dramas (my first ever TV show was The O.C.), but I feel like people from different demographics may also enjoy it.

I am not a fan of the casual statutory rape between Mrs. Grundy and Archie Andrews. Not even a little. Especially because the narrative doesn’t make the effort to acknowledge that it is actually rape; it just implies that it apparently can’t go on. I hope the writing team address this issue as soon as possible because this really was the only major drawback to this episode.

I don’t even want to complain too much about Kevin, who is a Cardboard Gay, because I want to give the benefit of the doubt and see if his personality grows in further episodes. I actually feel guilty that I may have been too harsh on him already, but we’ll see. So far he has been comic relief/sidekick, so let’s hope for more development.

I don’t know quite how to react to Cheryl Blossom. She is the “Queen B*tch” stereotype that I’m not overly fond of – the Allison DiLaurentis/Quinn Fabray syndrome, if you will. Then there’s the mystery surrounding her brother’s death which she may have lied about given the gunshot wound. I’m interested, but I want her to be more than what she was has been in this episode alone.