This time, alongside a great dream montage that pulls visuals straight from the comics, Riverdale adds more depth to Jughead as he copes with living by himself and having an undependable father. Plus, with Polly now missing, the Coopers and Blossoms are at worse odds than before.

After a few weeks, we finally find out where Jughead started living after being thrown out of the drive-thru: one of the school’s closets. He wakes up earlier than everyone so he can go shower inconspicuously, but Archie foils him and starts grilling Jughead on what he is doing there so early. Suspiciously, Archie passes up the opportunity to offer any reasons for himself. 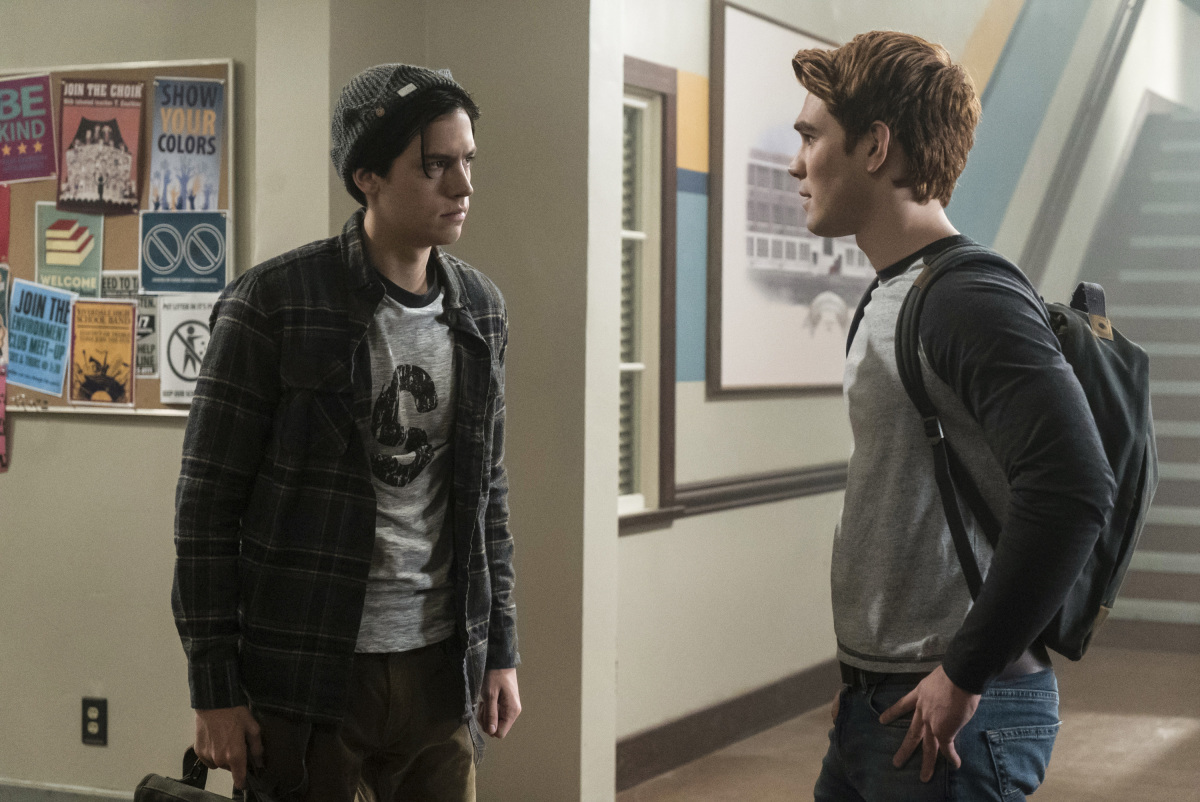 Jughead shows the closet to Archie who obviously gets concerned with his friend and offers some help in the form of a place to live. He also offers to talk to his dad about rehiring Juggie’s dad, who had been fired for stealing. Jughead goes to talk to his dad, F.P., and finds him hungover and in bad shape. Even in his state, F.P. is not very willing to go back to work for Freddie Andrews after everything they had gone through.

However, after Jughead’s visit and looks of disdain, F.P. makes the effort to go talk to Freddie about the job. He ends up taking it because he wants to be better for his son, especially now that Jug’s mom has run away with Jug’s 11-year-old sister to escape his drinking. Things go well initially, with F.P’s first day back going smoothly. In fact, things went so well that F.P. invites Freddie, Archie, and Jughead for a dinner at Pop’s on him.

During dinner, the conversation seesaws between “F.P.’s and Freddie’s good ol’ days from High School” and “uncomfortable stares”. It all starts when F.P. takes a sudden leap from asking if Betty was Jughead’s girlfriend to Freddie deciding to take the check on his own, which ends with F.P. mentioning that Freddie “owes him”.

Archie, Jughead, and F.P. decide to have a small jam session during which Archie asks F.P. about Freddie. F.P. tells him that Freddie had, in a way, ripped him off when the two were partners. Archie then asks his dad about his side of the story. Freddie tells him about F.P.’s constant stealing and how many times he had to be bailed out of jail. Cutting him loose was mostly a business decision. 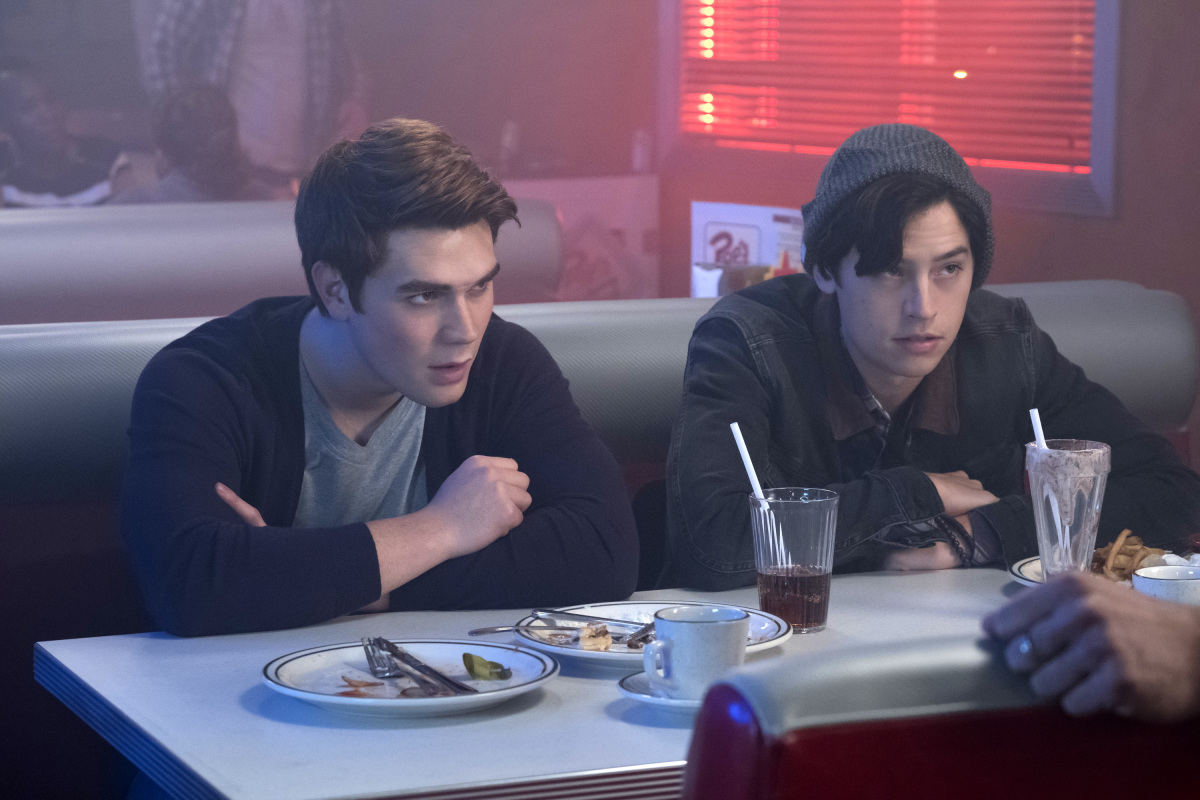 Back at the school, Det. Keller takes Jughead into custody for Jason’s murder based on him having an apparent history of “arson”, which is all just circumstantial evidence. However, when asked for an alibi for the time of the murder, Jughead asks for a lawyer. Betty visits Juggie and tells him they couldn’t find his dad, but the Andrews came down and are taking care of everything. Freddie tells Det. Keller that Jughead was working for him during the week of July in which Jason died. But that’s a lie, as evidenced by him forging papers that attest to this — I wonder how many episodes it will take for this to blow up on Freddie’s face.

As they leave the precinct, F.P. finally shows up. Despite Archie once again offering that Jughead stay with the Andrews, he decides to go with dad. However, F.P. tells him that he needs some time to get his shit together and the family back on track, so, in the end, Jughead rooms with Archie. But he won’t give up on his dad – not yet, at least.

The episode ends on another one of Jughead’s voice overs as we see that Jason’s letterman jacket from the car Jug and Betty found last episode is inside F.P.’s wardrobe. This indicates he was the one who torched the car and destroyed the evidence.

Still dealing with her mother’s betrayal by forging her signature, Veronica spent the episode in fight mode. She can’t accept that Hermione is seemingly destroying the Lodge family. Ronnie attacks her mom by buying things and going clubbing. Her mom responds by reporting the credit card as missing. From what they say, this is how the Lodges generally cope.

However, calling it a truce, mother and daughter talk it down and come to agreeable terms. Hermione has to tell Hiram that Veronica’s signature was forged. Veronica has to accept the ever-growing affair Hermione is having and stop her “frivolities” given their decaying financial status.

With Polly having escaped the care home she was in, Betty is concerned for her and the baby’s well-being. So, she has a very private conversation with her friends about this particular issue while simultaneously not paying attention to her surroundings. A rookie mistake that leads to a girl snooping on the convo and texting Cheryl about it. Thus, in very Cheryl-esque manner, she decides to tweet about the very-private-let’s-keep-it-to-ourselves conversation, steering the topic to “Polly Killed Jason” waters.

Betty decides to organize a search party for Polly in the woods that the Blossoms interrupt. They brought their hounds with them to search for the alleged murderer. Alice is forced to reveal in a press statement (how chic) that Polly was pregnant with Jason’s child, which affects Cheryl and her parents.

As Betty talks to Jughead, the duo/couple run into that classic old trope where a person who had run away previously goes back to exactly where she had been when she had run away before. In this situation, we learn Polly was staying in the Coopers’ attic all along, and Betty finds her there. 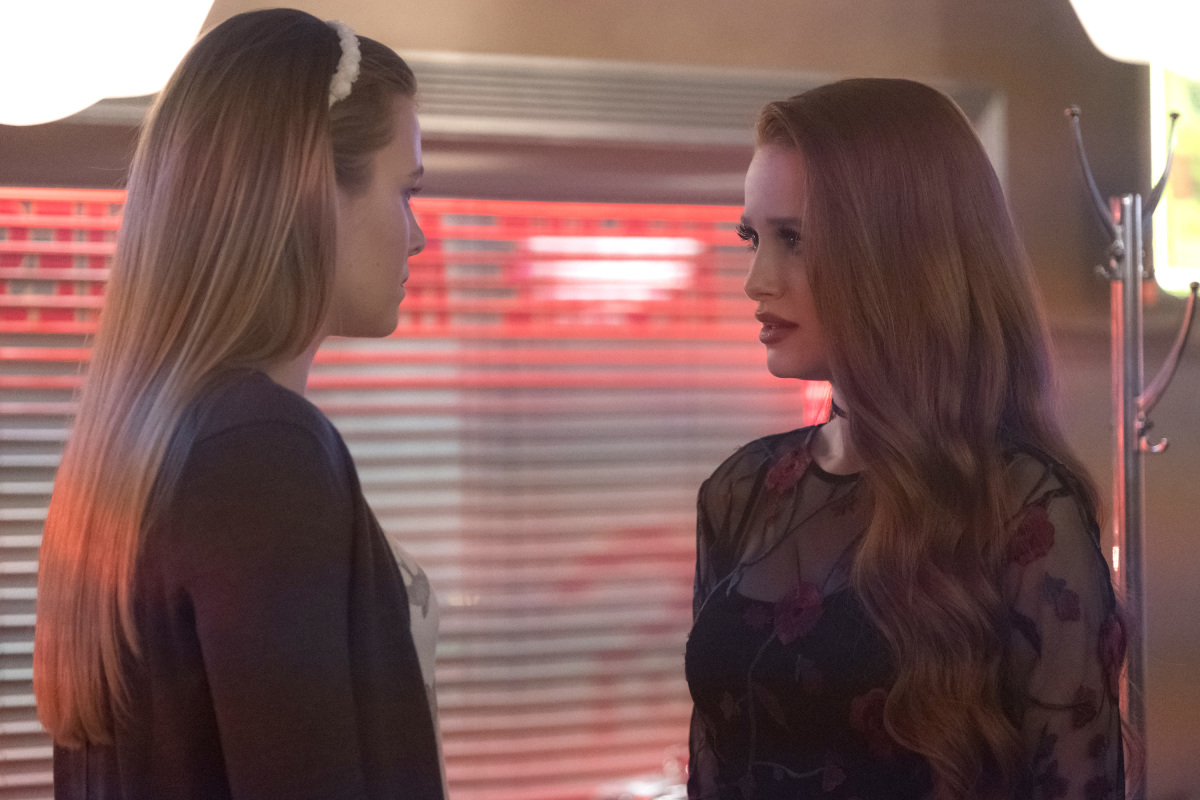 Doing a 180, but also in character given how involved in All-Things-Jason Cheryl is, she takes an interest in Polly because of the baby, offering help in whatever way she needs. Betty asks for money so Polly can go somewhere safe for her and the child. Cheryl says she will ask her parents, who also have an interest in Jason’s kid albeit not the one we’d hope for. They are much more invested on taking care of it themselves and getting it away from the Coopers.

When Polly is ready to meet with the Blossoms to get the help she so needs, Cheryl steps in and tells her to go away. She knows her parents are being malicious with their intentions. It mirrors Mr. and Mrs. Cooper’s own intentions. They want Polly to give the baby up for adoption, in contrast with Polly’s own desires. Thus, after Cheryl’s fair warning, Veronica offers to let Polly stay with the Lodges.

I loved seeing more about Jughead. First, there was that dream montage meant to mirror the comic’s style that quickly turned into a nightmare. We saw how much he struggles on a daily basis by not having a stable living situation, his grades being poor, being bullied constantly, and away from his family. All this makes me glad that at least he managed to get himself some good, loyal friends, and a girlfriend. Though I’m still a bit upset about Riverdale not addressing Jughead’s comic canon asexuality (so far, at least).

The plot with his dad is also very well done and believable. From the show, the implication is that he has an alcohol addiction (at the very least). Plus, his involvement with the Southside Serpents definitely does not help his case. Still, it’s nice to see that Jughead doesn’t want to give up on his dad even when he is disappointed and frustrated with him. Veronica got the bitter end on the least interesting sub plot of the episode. Even if she got some pretty cool scenes like the clubbing one. I find her familiar “fighting dynamic” with Hermione oddly adorable? Though that might not be the best word. Fascinating? Maybe it’s that Veronica goes to the club prepared with a good amount of cash, indicating that she suspects her mom would pull the “stolen credit card” stunt. This is a dance they’ve done before it seems.

I still think Hermione got off way too easily after falsifying Veronica’s signature, but it does line up with this show’s trend of handling crimes more “internally”.

On the Coopers. I have nothing but love for Betty and Polly, but that whole “she’s in the attic AGAIN” was so forced. She had been in the attic for at least a day. She got there by herself and managed to not make anyone in the house aware? It seemed contrived, to say the least. Perhaps there’s a honeypot there about how the Coopers were so busy trying to find her that it kept their senses from working. Or maybe a clever metaphor about not being in contact with their own family when they’re right under their collective nose.

Finally, guess who is my favorite ship on this show? Cheryl and Her Soft Side! Every time those two are on screen there is a big smile on my face. Seeing this young woman, who is insufferable most of the time, blurting out dialogue that a normal human being would not utterly delights me. She comes straight from the “Fabray-Lopez-DiLaurentis School of B*tchcraft”, and her getting all touchy-feely about her brother is an absolutely divine sensation. I know this pairing is not one we get to see often, so I enjoy myself whenever the writers do their thing with her.