In its probably weakest-but-still-enjoyable “Chapter Six: Faster, Pussycats! Kill! Kill!”, Riverdale shows us more of the famous Josie and The Pussycats. Archie has issues about performing while Veronica is going through a lot of problems with her mom starting a relationship with Freddie Andrews. Plus, Betty reunites with her sister, Polly, and it’s amazing!

Starting off with the main plot of the episode, we find out that Riverdale High is hosting a Variety Show which will be headlined by Josie and The Pussycats. Archie tries auditioning for it, but his stage fright allied with “great peer support” by the football team gets him so nervous that he runs off stage. He asks Valerie to sing with him, but she refuses because she is a Pussycat, so Veronica offers herself for a duet and he agrees.

At a Pussycat rehearsal, Josie and Val have an argument about who sings what during the bridge. It seems like a pointless, but heated fight that ends up with Val quitting the band because she feels better singing with Archie. 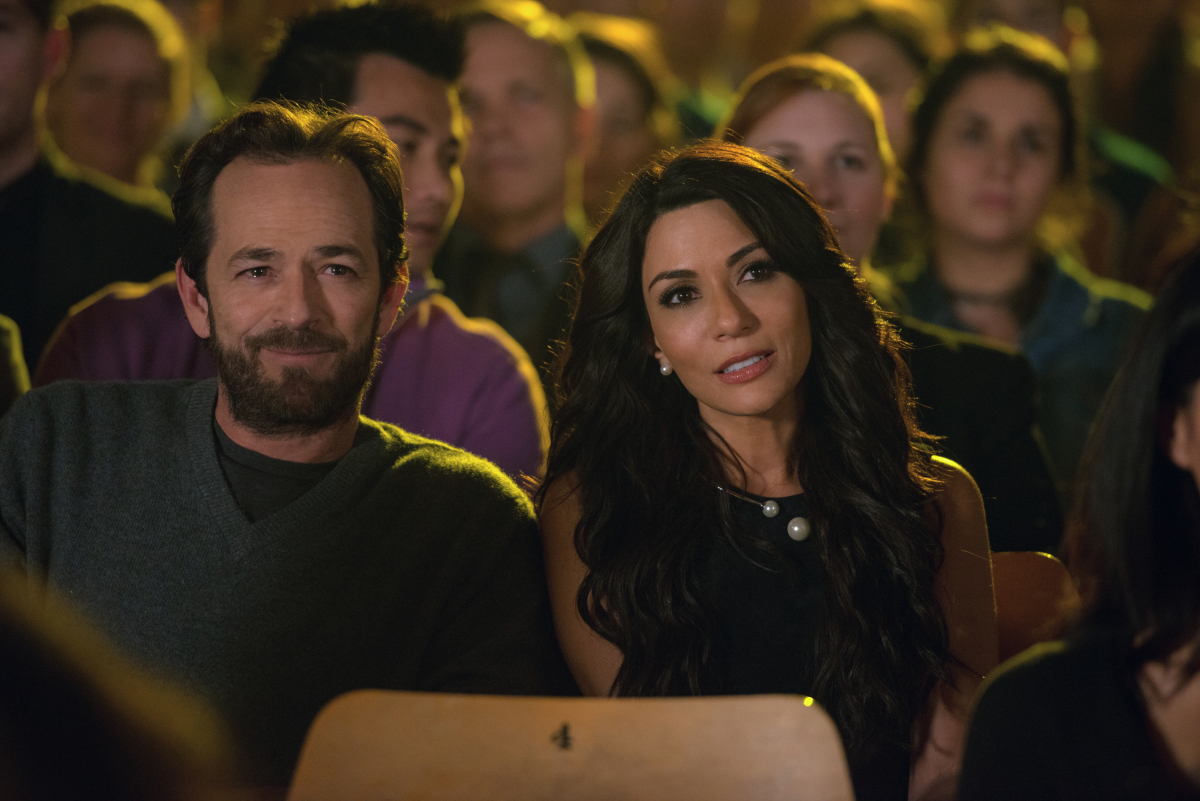 Hermione tells Fred that, under her new job as Fred’s accountant, his company will not carry on long without more income. He says that he wants to convince the Mayor to give him the drive-in area that an anonymous buyer purchased. And of course, he doesn’t know that said anonymous buyer is, in fact, Hermione herself. Logically, because this is a TV show, Fred asks Mrs. Lodge to be his co-host at the presentation he will give the Mayor in trying to get the contract. Also because this is a TV Show, Veronica approaches the office and spots Fred and her mom kissing.

Josie talks to her mom, the Mayor, about Val’s exit from the band and their coming performance at the variety show. Turns out Josie’s mom is not entirely pro-Val anyways and is actually kind of an asshole to Josie in some ways. There’s also the fact that Josie’s father, some figure in the jazz industry who doesn’t particularly approve of the Pussycat’s pop genre, will attend the show which has Josie riddled with anxiety.

Veronica tells her mother about the kiss and confronts her about her marriage and the thought of how things will be after her dad leaves jail. This leads her into catching Archie rehearsing with Val. The two have an argument that has Veronica storming out and, surprise!, joining the Pussycats – this comes as a nice addition after Josie’s mom explicitly told her to find a “skinny woman of color” to join the group. 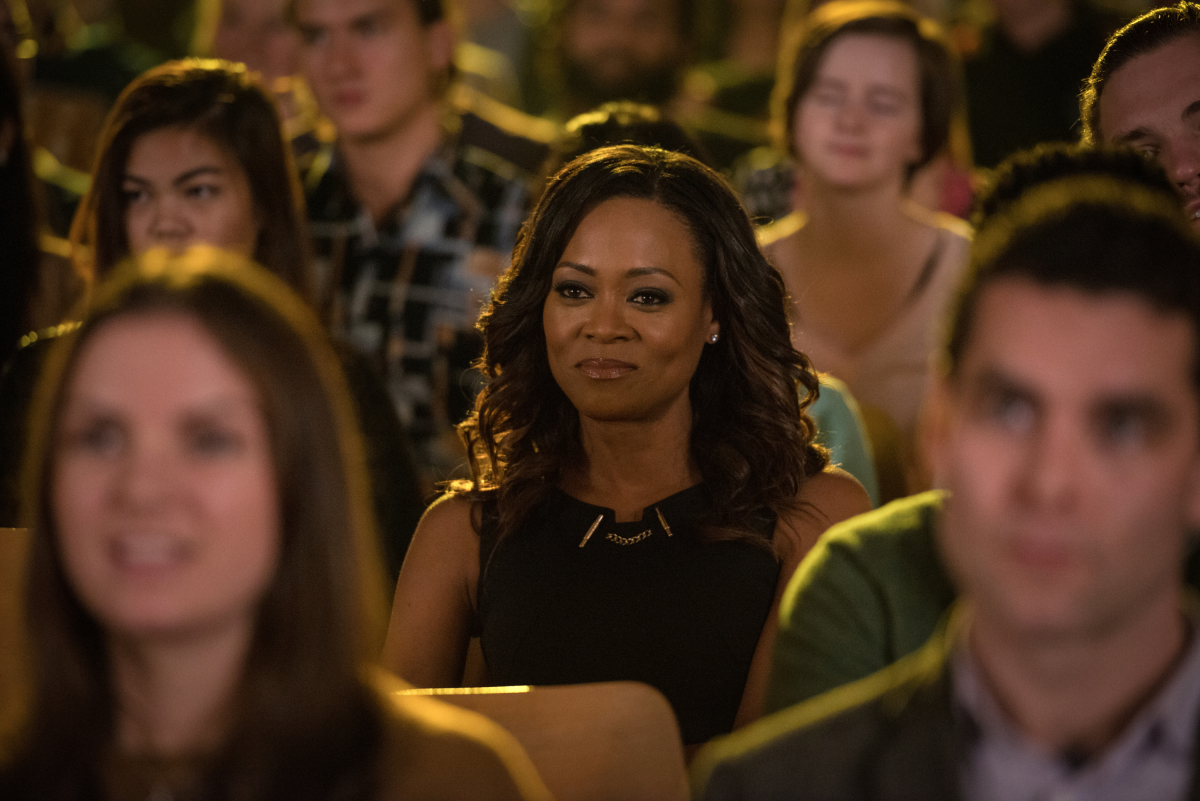 The business dinner from Mr. Andrews is teeming with awkwardness: Josie calls out Archie’s “Yoko Ono-ing” the Pussycats, Veronica is clearly not okay with Hermione kissing Freddie, Josie’s dad has issues with his daughter’s band, and so on. The pitch, however, does better with the Mayor who says that she wishes she could give the contract to Fred, but it would need some shareholders’ signatures from the anonymous buyer – again, Hermione, present at that dinner.

This leads us to Veronica who wants to apologize to Hermione after Josie telling her that, even though Ronnie wants things to go back to normal after her dad’s comeback, there will probably be more to it. However, Hermione asks Veronica first to sign the papers to give Freddie the contract as the Lodges made her a shareholder. Ronnie is offended by that and storms out without signing it, but it only gets Hermione to fake her signature. 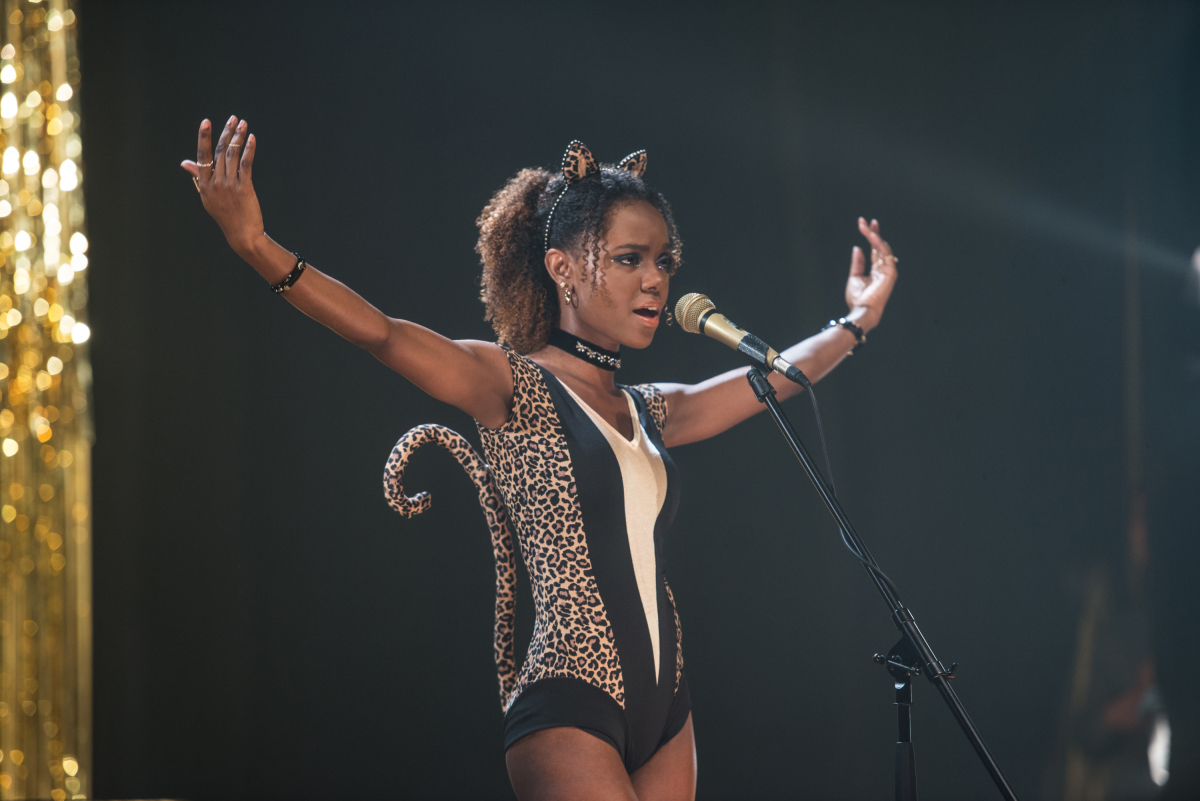 Archie has another conversation with Val and tells her to go back to the Pussycats, saying he can do it alone. She goes and makes peace with Josie who accepts her return to the group right as the Pussycats, now made up of four women (yay!) will perform a disco song for the whole town at the variety show. The performance is a banger, obviously, except for Josie’s dad who stands up and leaves mid-song. Josie is understandably upset, and ends up being comforted by her mom in the restrooms. 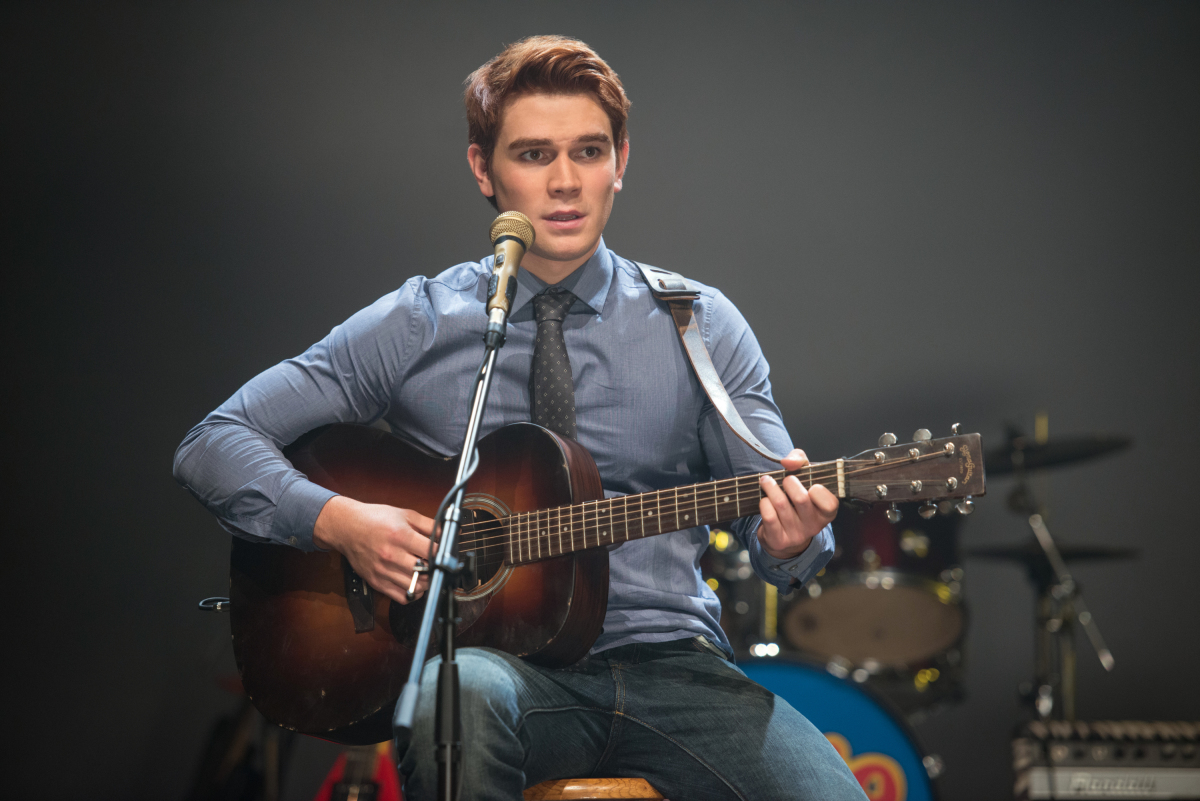 Veronica apologizes to Archie about their argument from earlier, blaming it on her feelings about her mother apparently giving up on things going back to normal as she dates Mr. Andrews. Archie takes position to start his performance with an original song, faces his fears and gets a standing ovation in the end (even though he starts off with his eyes closed). As he leaves the stage, he finds Val in the school’s hallway and they kiss. Veronica ends up meeting her mom and Fred a little later and she finds out that Hermione faked her signature to give Mr. Andrews the contract.

Now, side plot wise, the investigation on Jason’s murder continues as Betty invites Jughead over for breakfast. Obviously, it is just a ruse when Jughead keeps Alice Cooper occupied enough for Betty to snap some pics from her mother’s handbook for Polly’s location. They find out that Polly is at a care house called Sisters of Quiet Mercy, a home for troubled and disenfranchised youth.

The duo makes their way to the shelter and Betty has a tearful and emotional encounter with her sister as she sees that Polly is very, very pregnant. After a brief conversation, they realize that their parents lied to both of them – about Polly’s self harming, Betty’s lack of visitation, and, most importantly, that Polly knew about Jason dying. Naturally, upon hearing the news, Polly starts having a deep emotional response as an orderly takes Betty away to meet her mother who was warned about Betty’s arrival at the house. 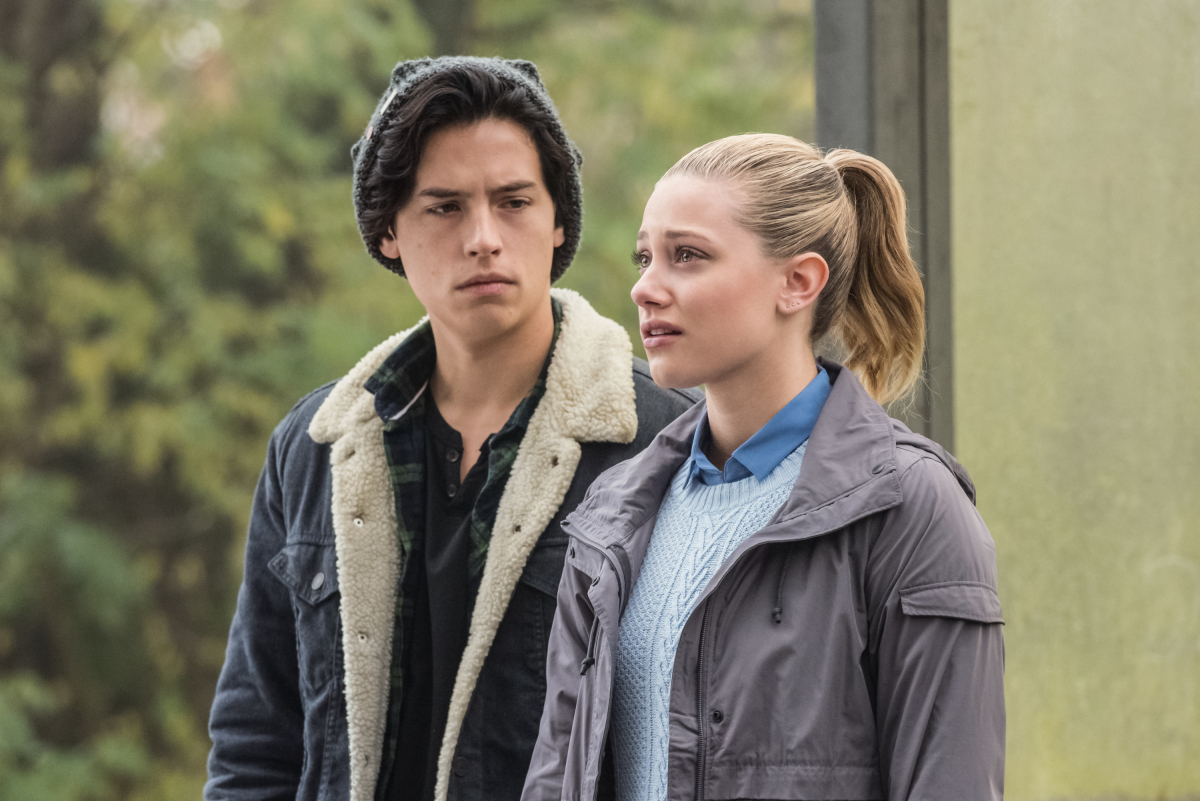 There is a heated argument between Betty and her parents, even reaching the point of Alice saying that her husband wouldn’t have the guts to murder Jason and she wish she had done it.

Jughead scales the window for a visit and they have a moment that leads them to a KISS (what! the! fuck!). However, Betty is much more concerned about Polly’s story that she was going to run away with Jason on the 4th of July before her parents had her institutionalized. Betty recalls Polly mentioning a car Jason had stashed for them and the duo decide to go after it.

Right at the spot Polly had mentioned, they find the car with a bunch of Jason’s clothes and drugs. They take pictures to take to Sheriff Keller, but someone’s watching them. When they finally arrive with the police at the location, the car has been torched to flames. Betty goes back to Polly’s care home to find her missing from her bedroom, with the windows broken and blood staining the glass shards.

Now that we are reaching the season’s halfway point, Riverdale is starting to put out more fillery episodes which I started noticing last week. They’re compartmentalizing the more interesting plot – Jason’s murder – for Betty and Jughead which sort of works because Lili Reinhart and Cole Sprouse have a lot of chemistry together. Too bad that it reached a point where Jughead, who is asexual on the comics, kissed Betty when there was a lot of hope among the fans that Juhead’s comics sexuality would be kept intact on the TV adaptation.

Nevertheless, I loved Polly’s introduction and how we, apparently, can barely trust a thing the Coopers say. From last week’s strong sharing moment between Mr. Cooper and Betty about how Polly tried to kill herself, to this episode’s reveal that she was just pregnant and running away with a happy baby-daddy to be. What isn’t expected, though, is Cheryl’s reaction to this piece of news which will probably happen in the next installment.

It’s worth mentioning that the Coopers are straight up gaslighting both of their daughters in some way. They are strong willed on the narrative that Polly is mentally ill and are punishing her for liking a Blossom which is apparently against the rules of The Big Blossom V Cooper Feud. Besides Polly, they also implied to Betty that she might be going “insane” and I wouldn’t be surprised if they tried to institutionalize her as well. Let’s remember that, according to Betty, mental illness runs among the Coopers and that renders shame to Alice. 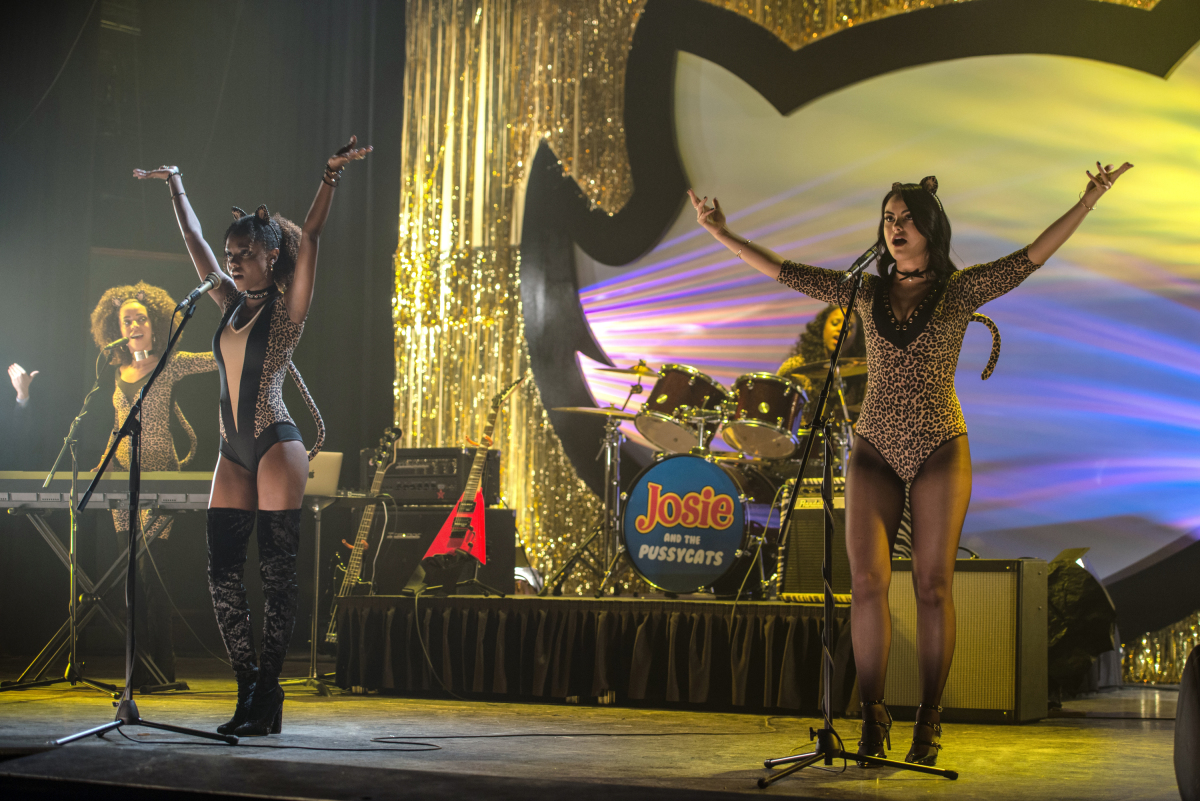 The main plot, however, didn’t accomplish too much. I did like the spotlight being given to the Pussycats again, but the conflicts seemed pretty meaningless after a while – at least the ones involving Archie “Yoko Ono-ing” the band with Val’s exit because I didn’t believe for one second that she wouldn’t be back.

This storyline at least gave some chance for some positive interaction between Josie and Veronica, which had two distinct scenes where Josie offers her support and some sage advice to Veronica. Then there was the reconciling moment between Josie and Val which was all sorts of cute and that’s what I need more – not scenes that feature the Mayor being a bit of dick to her daughter or Josie’s dad being non-supportive of her choices for the band.

As for the musical scene, Riverdale is to be congratulated. Both singing performances this episode were amazing. The casting director picked excellent singers for Josie and The Pussycats, Veronica, and obviously, Archie.