In “Chapter Five: Heart of Darkness”, Riverdale comes together as the Blossoms (finally) throw Jason a memorial and we get a chance to see how bad their family dynamic is. Archie deals with what means more to him – music or football – and Betty digs deeper on her family’s mysteries. So let’s dive in…

We start off with Cheryl waking up from a nightmare involving Jason. She is surprised by her mom, Penelope Blossom, who both reprimands her from sleeping in his room and tells her she won’t be allowed to give an eulogy during the memorial. While the group of friends are hanging out by the bleachers, Cheryl comes up to then and hands out both black invites to the event and some snide remarks to Veronica. Betty tells V that Cheryl is going through a lot as to not take it personally. 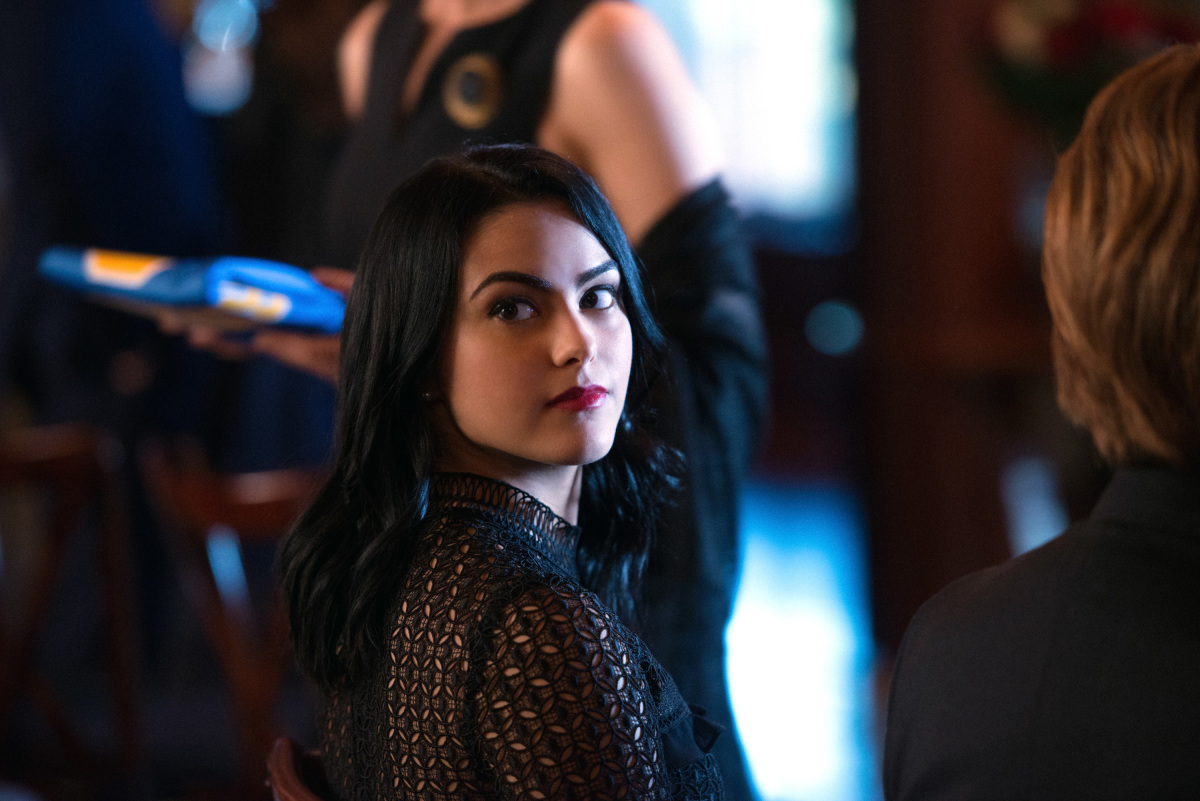 Veronica decides to go after Cheryl and asks her for a friendlier relationship between the two. Cheryl agrees on “frenemies” and invites V for a slumber party the night before the memorial because she doesn’t want to be alone.

At the slumber party, the Blossoms are having a dinner from hell. At the table, Veronica and Cheryl sit awkwardly along the parents and one grandmother. Ronnie tries out some small talk, but is casually and viscerally taken down by Penelope and Clifford (Cheryl’s dad) with a conversation about Veronica’s father, Hiram, who is in jail. It’s clear that Penelope deeply resents her daughter for aiding Jason on his escape attempt.

We get to see a lot, during the episode, about how messed the Blossom parents are – specially Penelope who we were led to believe was just a victim only two episodes ago, but showed up a whole set of claws scratching Cheryl (and possibly Jason) all the way, which can also give more depth as to why Cheryl is the way she is. We need to remind ourselves that, so far, the narrative on Jason’s death was that he was trying to get away from Riverdale with his parents being a probable cause. 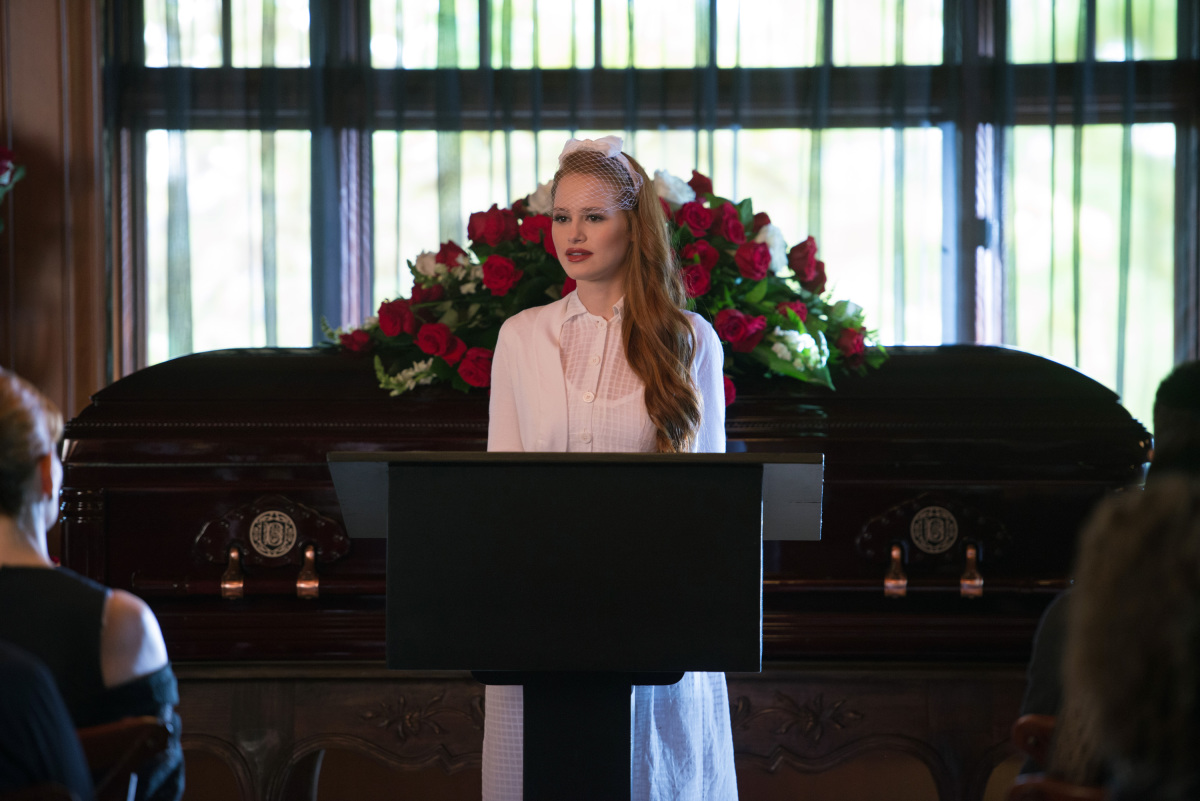 Now in their bed, Veronica asks why Cheryl invited her instead of closer friends. Cheryl says that it was V who went to help her, back in Chapter Two, when she stormed off the pep rally crying because of Jason. Veronica tells her *friends*  that she should be allowed to speak on her brother’s funeral and even encourages her to do so with her parents’ disapproval. Cheryl explains that the Blossoms will kill her (by her tone, it’s not quite clear if this was supposed to be taken as literal or figuratively), but she will do it.

Finally at the memorial, the Blossoms’ eulogy will start, but Cheryl walks in defiantly wearing the very same white dress she wore the day Jason went missing. She explains that the dress makes it feel like her twin brother is still there. However, she starts breaking down and crying in front of everyone, but Veronica goes out to help her and lend her a helpful hug.

A while later, we see Penelope lashing out against her daughter while being incredibly abusive: she says that, if any would have her, Cheryl would be shipped off to a boarding school in Europe right away. Still, apparently, as form of punishment, Penelope will take away the River Vixens from Cheryl.

Spending most of the episode detached from other narratives, Archie Andrews is trying to handle both of his passions, and Ms. Grundy leaving. He tells his father that he is aiming for the captain position of the football team because sports can get him to college which will open the musical doors for him. However, it won’t be that easy as Reggie wants that position himself.

Val, from the Josie and Pussycats, gives Archie a number of a musical coach she knows that can help him out on his songwriting now that Ms. Grundy is gone (yay!). He calls this man and sets up a meeting where he meets the renowned Oscar Castillo. Archie is thoroughly impressed by him, but the feeling isn’t mutual. Mr. Castillo speaks about the work necessary for a musician to make it in the business and is dismissive of Andrews’s demos, telling him he works in sheet music. 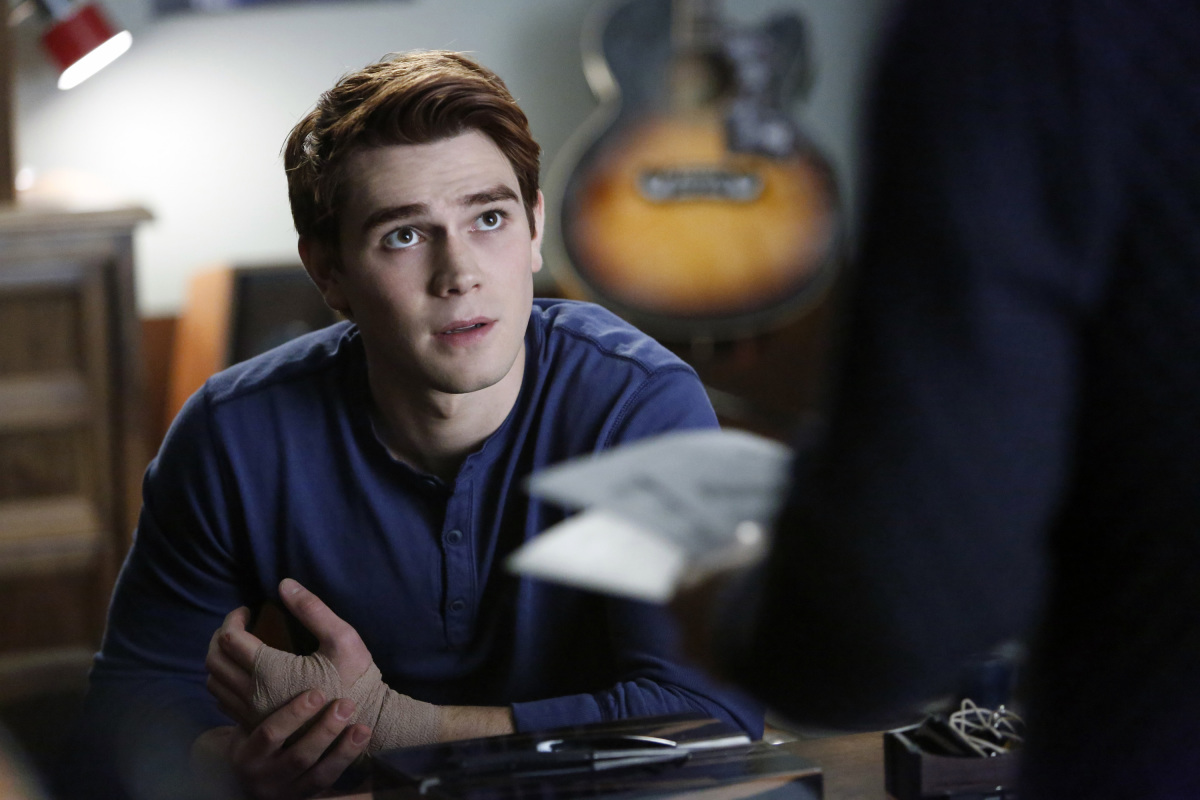 Thus, Archie, with the help of Val, spends the better part of the night writing sheet music to show Mr. Castillo which stops him from studying his football moves/plays. The next day, at the football practice, he is a bit wonky as he tries to cheat off his arm the plays, but said arm ends relatively hurt probably because of improper protective attire (I’m assuming here given it was the same arm where he had written the cheats). Veronica finds him later and takes care of his arm in a very flirtatious way.

Back at Mr. Castillo’s office, the music coach says Archie’s work is sloppy and juvenile, too focused on breakout songs and that he might not be able to offer the same type of working relationship as Ms. Grundy (Ha Ha on the writer’s room!). This starts Archie on a lot of self-doubt: is he actually good or was he just Ms.-Grundy-good? Can he manage football and music with the same intensity and passion? Thankfully, Val is there to set on him straight and call him out on his double standard self-questioning and work ethics.

At the memorial, before Cheryl spoke, Archie comes in wearing his letterman jacket (what? To a funeral? My dude. The fuck?). He tries to make a gesture by giving Penelope Blossom Jason’s old football jersey. They have a *weird* moment when Mrs. Blossom caresses Archie’s cheeks and hair, making him uncomfortable, saying that he looks just like Jason.

The football coach has both Reggie and Archie at his office as he makes his decision on who will be the team captain. He picks Archie, but fearing the sport will take too much time away from his songwriting and that this could hurt the team, Andrews refuses the opportunity in favor of Reggie.

Fred meets with Hermione at Pop’s, her workplace, after assuming the two were on the start of something wonderful and bright after the drive in “date”. Hermione kills him softly casually pointing out that the both of them are still married. 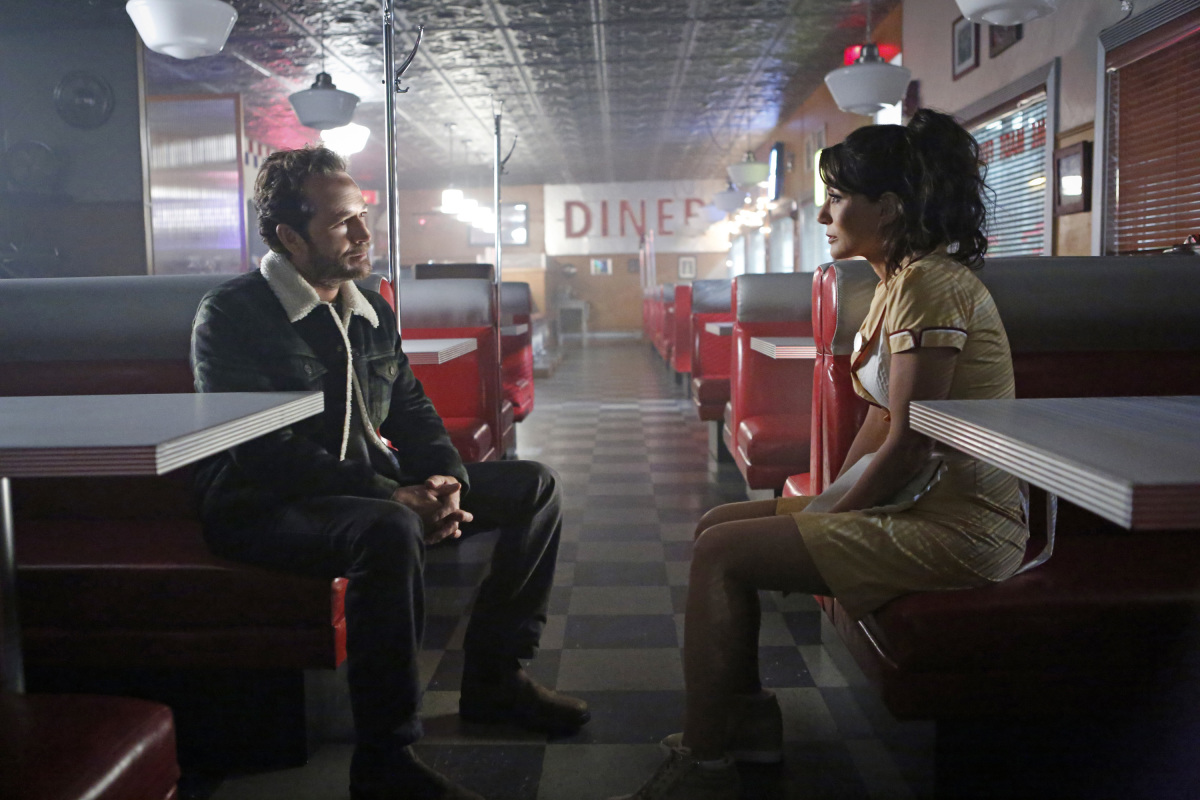 A while later, someone enters Pop’s when Hermione is working alone and leaves a box on the ground. At this point, I am already 80% sure of what’s in the box – PG-13 Scaring Tactics are so predictable. Still, I don’t look away from the screen as Hermione opens the box to reveal a rattlesnake. I wanna take this opportunity to voice my utter and complete disgust on using snakes as plot scares – I mean, people have phobias, you know? Myself included. Snakes on a Plane scarred me for life.

Nonetheless, Hermione calls out Fred to get rid of the snake for her and so he does. She explains to him that it was a message from the Southside Serpents about her husband owing them money. A couple scenes later, Fred decides to offer Hermione the bookkeeping job she applied for at his company in “Chapter One”.

Our final plots takes us to the school journal as the duo are investigating what had happened to the sheriff’s office last week when Jason’s murder board was ransacked while they were at the drive-in theatre. Travis comes in to confirm the date he has with Betty and, upon questioning, she tells Jughead and Kevin that is all about finding the truth on Jason’s death as the two were friends.

At the date, Travis tells Betty that Jason had stopped talking to him after he met Polly. Soon after, Jason started doing some shady stuff, first selling his stuff, then cutting off friends, and finally, if the rumours are to be believed, sell drugs.

Betty decides to ask her father, Mr. Cooper, about Polly. He finally tells her that, after a heated argument with Jason, Polly came home and slit her wrist in the bathtub. Mr. Cooper found her that way, trying to kill herself, and sent her away to an institution of care. After telling Juggie, he decides that they need to get the truth by breaking into Jason’s during the memorial. 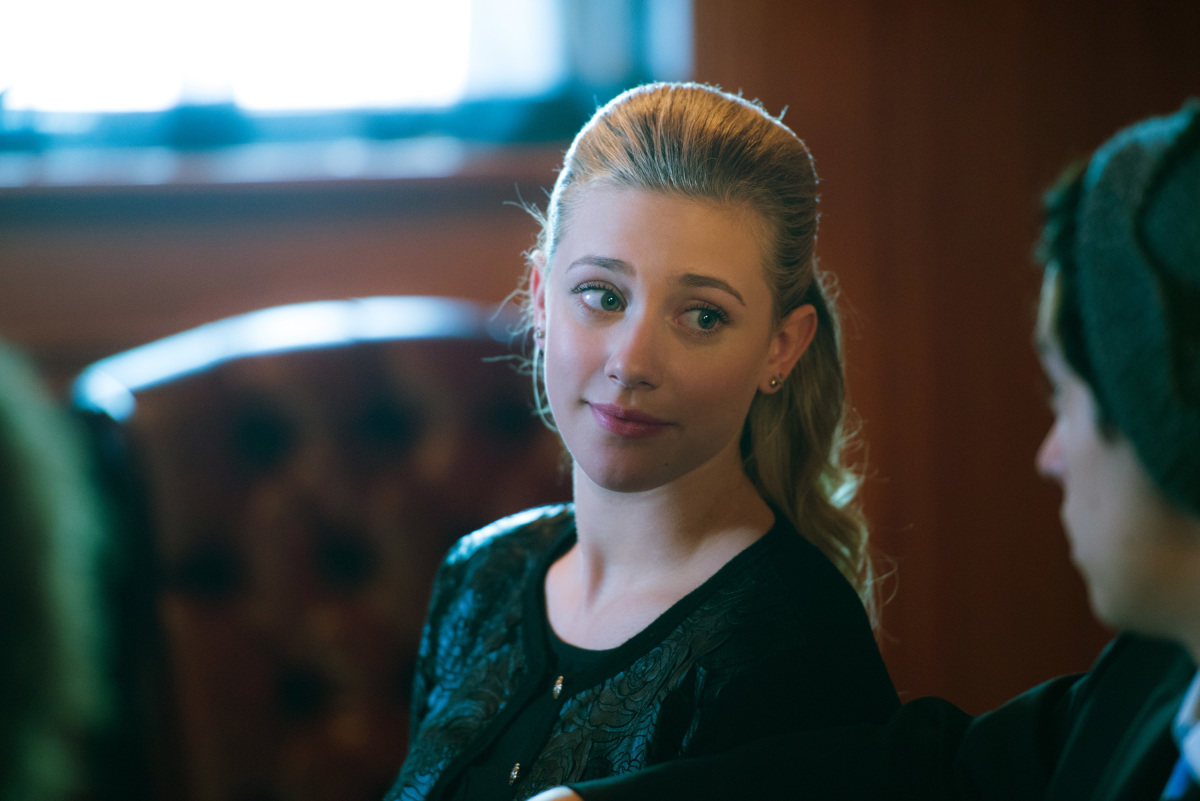 And so, at the event, Betty eyes her father having an argument with Jason’s father, but ignores it for the moment because it finally was the time to look for clues inside the deceased’s room. However, The Grandma of Convenient Oversight surprises them inside the room, she completely mistakes Betty for Polly and reveals some crunchy plot details: she had given Polly a family ring and she was engaged to marry Jason.

Betty confronts her father about this who already knew about the engagement. He explains that the hatred between the families started many years before, with the great grandparents of the families being partners at work, but there were discussions that lead the Blossoms’ ancestor killing the Coopers’.

Jughead and Betty finally realize that the Coopers are indeed people of interest in Jason’s murder. Betty concludes that whoever trashed the sheriff’s office was not at the drive in… like her father! Thankfully, Riverdale shows us that it was in fact Mr. Cooper who stole the murder board as he has all the pics with him at his house. Finally, Jughead realizes that they need to speak with Polly asap.