This comic doesn’t run short of terrible moments, which occur ripe for our enjoyment. This alone plays into the theatrical character of tragedy. That is, narratives surrounding the fall of the mighty and the despair of the innocent. Curiously, this issue begins with Gwen, Sophie and Lying Cat watching the news of Phang’s traversing the Timestuck, while knowing better on the true outcome to unfold. We’ve all watched news in a similar fashion, not necessarily knowing or suspecting a different dynamic at play. After all, real life also doesn’t run short of terrible moments, never to anybody’s enjoyment.

But what sets these characters apart is the fact they’ve had a hand in the writing of that narrative. One way or another, it’s a case of the author beholding their handiwork. Feeling horror at best, indifference at worst. This is how we’ll approach the climax to the darkest story arc in Saga so far. The Sophoclean dynamic is known to us already. Knowledge, however, doesn’t soften the impact, nor the horror.

The Phang scheme has now been exposed as something of a manufactured catastrophe. A risky play in a game board where countless lives are at stake. Such is war. In spite of the religious zealotry, the introduction of Jebarah, Kurti, and their tribe has nuanced our impression of Phang. Suddenly, the comet is not just Sophie’s homeworld wherein she was sold to serve in Sextillion. It’s now a piece on the board, a pawn intended to serve the long game. But as Sophie is quick to observe as we open this issue, there is a great cost to pay in spite of the damage control via massive evacuations. Here she asks Gwen a more than pertinent question. At what point do the necessary casualties become too many to win a war? Gwen, in her cool, analytical demeanour, can’t give an actual answer to that question. But no matter, the subject is put to rest for the night as Gwen’s wife, Velour, comes in…with cupcakes. Talk of cold pragmatism in war and cupcakes simply cannot co-exist under the same roof. Let nobody tell you otherwise.

Interestingly, we get a little of that Hazel-retrospective-narration during the transition from Wreath to Phang. She addresses the concept of evil as something arbitrary and depending on the perspective of the accuser. This may well be a caution against observing some questionable means as simple ‘evil’. Then again, mileage varies. A taboo coupling is nowhere in the vicinity of a potential genocide in the making.

Now, let’s hold on to that thought for a moment. Evil can also be construed as a misguided harmful action or intent against the innocent. Thus the definition of ‘evil’ may also apply to someone like Sir Robot, who had Alana and her baby at gunpoint last issue. Fadeaway influence and an ocean of guilt notwithstanding, such an action would put Sir Robot in a place beyond redemption. His intent no longer comes into consideration, because the character would have become a verb, encompassed only by his despicable deed. Marko is very aware of this, which is why he proceeds to execute Sir Robot. In turn, this would also affect Marko, if his apparent definite return to violence last issue is for real.

However, Petrichor interrupts him with a more important subject. She has found fuel in the The March’s ride, which should allow them to escape Phang before it hits the Timestuck. All of this is news to Sir Robot who asks why they haven’t left yet. The answer is no peaceful matter to Petrichor, as she tells them Alana has offered Jebarah and her tribe a ride. Petrichor addresses the potential smell problem of an overcrowded treehouse rocketship. But one has to take the tribe’s devotion for the Timestuck into consideration before giggling about the prospect. And indeed, Jebarah’s answer to Alana’s offer is just what we dread. The matron only sought Alana at this moment to return Marko’s blade. As for her family, however, they have no intention of ever leaving this comet. Her kind of faith is one that blinds her to imminent destruction. Under the circumstances, it’s more than frustrating to hear Jebarah’s assurance that the Creator will see them through this catastrophe. Alana attempts to threaten Jebarah into coming along by pointing her rifle at her, but the latter pays no heed. Her parting words are a name suggestion for Alana’s baby. ‘Kurti’, which means ‘sunshine’ in their tongue. Should Alana indeed name her child that, Hazel’s brother would be a living eulogy to the friend she’s about to lose. And she doesn’t even get to say goodbye to him.

Quoting Hazel’s narration, this farewell is as sudden as it is baffling.

Elsewhere, someone else is trying to cope with a different farewell. The Will, or Billy if you would, seems to have relapsed into heroine after the second parting with Lying Cat, Gwen and Sophie. As we’d expect, this features The Stalk’s return as his mental projection of choice. Such is the form his wish fulfillment takes. The one that tells him to get back on Marko’s pursuit to win his companions back. The opposing drive, the one to move on, then appears, taking the form of his sister. Of course, this makes for a very ‘peculiar’ twist of the ages-old debacle between the Angel and Devil on each shoulder. All the while, Sweet Boy keeps vigilance while his Master masturbates.

The black humour in this setting takes a wrong turn as an unknown presence shoots Sweet Boy, killing him. (Insert a several weeks-long NO here, thank you very much.) The strange-looking killer shows up from the shadows, shooting The Will as well, but only to incapacitate him. They claim to be exacting revenge on the former Freelancer for killing someone they loved. Billy seems to have gone from being accessory in a vendetta to being the recipient of another. Something of a snack in the middle of the main course indeed. Nothing to sneeze at in regards to disturbing and heartwrenching, though. Back to Phang’s orbit, where we learn the purpose of that cube thing Agent Gale obtained from Gwen last issue. After blasting a friendly Robot Kingdom craft intended to secure Phang’s safe passage through the Timestuck, two Landfallian dudebros use the cube Gale obtained from Gwen. Obviously, this is what those shady orders led to, and the source of Sophie’s inner conflict. The cube is a device to awaken the Timestuck, turning it into a living bomb. Instant apocalypse right there. And here is where it all gets really dark, really quick.

A lot of detail went into facial expressions. But the faithful capturing of emotions onto paper may do the reader’s heart a disservice. Hazel’s narration also adds a good deal of pain. In just two pages, Saga becomes truly merciless.

The Timestuck’s destruction occurs on the background while Jebarah rapturously speaks to her people. Fat load of good that will do. An explosion inside the giant baby’s body violently shakes the family’s rocketship just as they’re about to take off. Hazel’s family manages to escape in the nick of time, thanks to Petrichor’s quick fuel recovery.

However, although they get away safely, the impact has cost Alana her unborn child. Through alternating panels, we see Alana and Marko mourning their child, as well as the doom befalling Phang’s population, in frightful detail. The final actual image we get is Kurti falling under the black tides of Phang and the Timestuck’s entrails, desperately pleading for his life.

… and the rest is silence.

Alana, Marko and Hazel have all left something of themselves behind in a world become synonymous with catastrophe. Innocence and hope lie both sunken in the Phang’s dark waters.

Alas, the story goes on. Stay tuned, my friends. The sunrise follows even after the longest, coldest of nights. 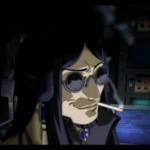 Devotee of coffee, whiskey and baleful sentiment. I also write a lot of things.