This article contains SPOILERS for Star Wars Episode VII: The Force Awakens (TFA). If you have not seen the movie yet, what are you doing?! Go!!

The new Star Wars film was a good movie by just about every metric. Great, even. I enjoyed every single moment of it. I will happily watch it again in theaters. In fact, I can say with a high degree of certainty that anyone who is a fan of the original trilogy is going to like this movie. It’s actually quite impossible not to, for one very good reason: it is the original trilogy.

TFA is, at its essence, is A New Hope (ANH). I’m sure this isn’t startling information…this is what 99% of the reviews are saying, right? However, in case you need convincing, here’s the bare-bones of the plot:

Droid has information needed by good guys, who wear orange and white, fly X-Wings, and are a small faction in opposition to the big bads, who wear black and fly Star Destroyers. Droid travels on sandy planet, people try to steal and sell it, until it ends up in the hands of unlikely hero who is force-sensitive and super sheltered. Unlikely Hero decides to get droid to where it needs to go. First has to go to some kind of cantina to find transport. There’s a band playing in the corner. Eventually, Unlikely Hero ends up joining the people who wear orange and white. Meanwhile, big bads have a thing that isn’t a moon, which can blow up planets; they blow up a rather important planet, then decide to target the base of the orange/white heroes. The good guys launch a sky battle to take out the not-a-moon. A “mentor” figure gets stabbed with a lightsaber by someone emotionally close to him while Unlikely Hero yells out. Not-a-moon’s threat is neutralized. People hug. Unlikely Hero channels the force in unexpected ways.

We can also note the beats taken from The Empire Strikes Back (ESB), such as the dramatic parentage reveal, the “Emperor” and his little hologram thing, and even the way it ended with Finn’s injury, to an extent.

It doesn’t stop there. Everything seems to be a reference to the original trilogy; the Millennium Falcon just happens to be chilling with a full tank of gas in a random junkyard so our heroes can use it. Finn’s stormtrooper ID number is the same as the cell number where Leia was locked up. General Hux says the phrase, “in a short while, not too far from here.”

There was also the tonal feel. The cinematography looked far more similar to the original trilogy than the prequels (i.e. fewer swoopy angles, and stuff like that one shot of Finn on a ledge looking over what was clearly not Mos Eisley). Weird and almost campy creatures would pop out of the desert or sit in the periphery. And of course, John Williams was back, and not shy about using old, established musical motifs. In fact, I’d argue that there was no “Duel of the Fates” equivalent in this soundtrack; to me, it sounded less original and more nostalgic, though pleasant as always.

Fuck, even the in-verse characters were fans of the original trilogy. BB-8 spent a good amount of screentime trying to get his senpai, Artoo, to notice him. Finn and Rey looked at Han Solo with stars in their eyes and squeed at the mention of Luke. The main goddamn bad guy is a literal Darth Vader wannabe, to the point where he wears a mask that he doesn’t need because thinks it makes him seem cool. 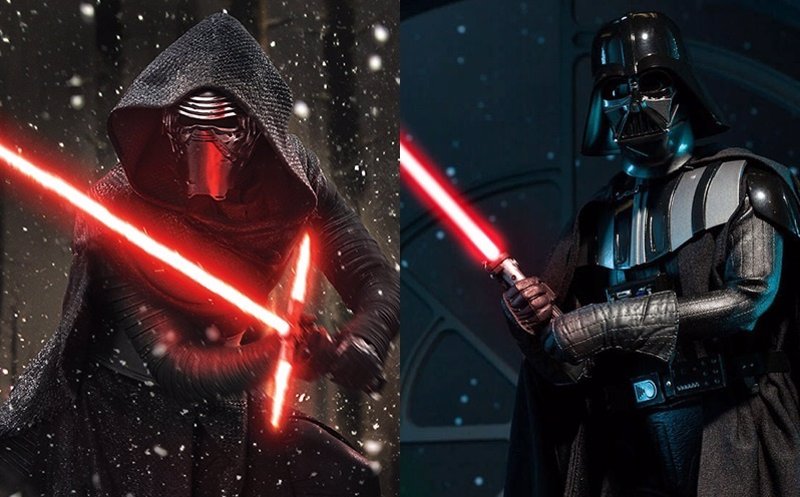 What’s weird is that this entire thing was not something that escaped my attention as I was watching. In fact, I realized it from the opening shot. In it, we see the underside of a Star Destroyer moving, which quickly establishes its ominous presence. I remember thinking to myself, “oh very smart, Abrams, that’s going to remind us of the opening shot of ANH.” BUT THAT FEELING NEVER LEFT. Because then we went for a crash landing into Not!Tatooine, and Poe told BB-8 that he was his only hope, and it was just…

I don’t mean to imply, by the way, that TFA was a shot-for-shot remake. The new characters are engaging and rounded, the existence of a female lead was a much-needed and refreshing update, the complicated familial dynamics at this narrative’s core are unique enough, and the dialogue certainly brought a new “feel” to the franchise, if you’ll allow me the vague compliment. More so, I truly don’t see how Episode VIII will be able to resemble ESB as closely, just by the nature of the characters and where they’re headed (unless Finn and Poe become the new Han and Leia, which I’m more than okay with), so it’s not as if I’m concerned about this trilogy being stale.

However, when you step back and look at the broader strokes, frankly…it’s just shy of lazy. Especially given that we had little to no explanation about how we’re literally watching the Empire 2.0 vs. The Rebellion 2.0. I mean yes, the prequels were bogged down in political details, and it was wise of Abrams to try and avoid that. But like, the Republic was supposed to have been reformed at the end of Return of the Jedi, right? The concept of the First Order rising up within it is not shitty, but the fact that they somehow got all the Imperial ships and outfits, and the Resistance got all the Rebel gear? The fact that the Republic Senate was blown up and it was barely talked about in-verse (though, to be fair, this pretty much happened in ANH too)?

TFA was just uninspired, on the fundamental level. Or maybe “safe” was a better word. Abrams was determined to make a film that fans of the original trilogy would love. And he did, with a completely unsubtle remake.

The thing for me, as I said, was that I knew this while the movie was going on. I sort of felt like I was being fooled into liking it—that it was quite obviously drawing on my nostalgia in an attempt to emotionally manipulate me. Well, I mean, all fiction is emotional manipulation, but you get what I mean. Seeing Admiral Ackbar once more did legitimately stir up feelings for me, almost against my own will. When I left the theater, this intensified, as I found out about all the hidden original trilogy easter eggs that Abrams crammed into this thing.

So the more I think about that, the more annoyed I get. Do they really think so little of us that they can just vaguely rewrite the story and still come away with raves?

And yet…I fucking loved this movie. Of course I did! It was everything I like about this franchise, plus a very conscious effort to keep a distance from that which didn’t work. I could have done with a slight bit more exposition about the First Order, Rey’s ability to learn the force so quickly toed the line of suspension of disbelief, and there were a few things that just seemed a little too convenient (basically Maz Kanata’s entire character, or Han and Chewie just happening on the ship).

But that doesn’t change that it was an incredibly diverting way to spend two hours. It got me excited about Episode VIII. It emotionally moved me at the moments it was supposed to emotionally move me. In other words, it did exactly what it needed to do: it’s a solid film that Star Wars fans can enjoy. In terms of plot, characterizations, and dialogue, I’d easily rank it above Return of the Jedi, and frankly it gives ANH a run for its money in some ways.

It’s an odd case of a D- for creativity, but an A for result. Maybe it’s okay that it’s plagiarized? After all, we are not teachers grading a media project. We are consumers of entertainment, and this is exactly the kind of meal I want to be fed. So…I see you, Abrams; I see you. But also more, please.