[spoilers for episode 3×16 of Sleepy Hollow, as well as season 3 in general]

Could someone please explain to me what’s happening on television right now? It’s 2016, for Pete’s sake! Why is it suddenly open season on women? It’s always been a problem, but it seems like lately we can’t go two days without hearing about another female character dying a stupid, unnecessary death.

This time I’m talking about Abbie Mills of Sleepy Hollow. Yeah, you read that right: Sleepy Hollow killed its female lead. Killed her. Stressed again and again that she’s truly, completely, totally dead, and there’s no bringing her back. It’s not a fake out: Abbie Mills is no more.

Sleepy Hollow was a fantastic show when it started. The chemistry between Nicole Beharie (Abbie) and Tom Mison (Ichabod Crane) kept me coming back even during the mediocre, bizarre season 2. I finally gave up around episode 6 of season 3 for various reasons, not the least of which was a new character played by Nikki Reed.

I’d always planned to catch up, so imagine my horror when I discovered Abbie’s fate. I couldn’t believe it. How could the show kill off its female lead? One of the Witnesses? One of the main characters? It didn’t make sense!

A quick rundown of the plot for those who haven’t watched Sleepy Hollow before: based, of course, on the Washington Irving story “The Legend of Sleepy Hollow,” the show moves Ichabod Crane to modern Sleepy Hollow, NY. He’s still from the 18th century, but a spell put him in a sort of suspended animation until the Headless Horseman arose again in our time.

The Horseman turned out to be one of the Four Horsemen of the Apocalypse. Abbie Mills, a lieutenant with the Sleepy Hollow sheriff’s department, and Ichabod partner up to defeat the Horsemen together. They’re both Witnesses, and it’s their destiny to save the world. 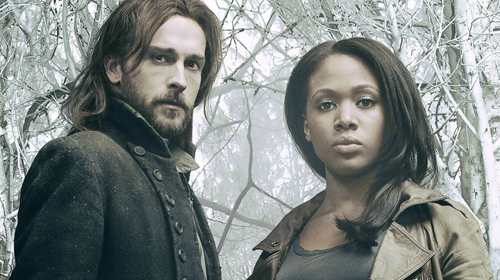 They do, of course, by the end of season 2. Season 3 jumps forward in time 9 months. Abbie has joined the FBI. Ichabod went overseas and got arrested on the way home for smuggling ancient artifacts. Abbie springs him and they reunite to fight the new threat, Pandora (Shannyn Sossamon). Yes. With the box.

Anyway I didn’t get much further into season 3, though I remember being excited about all the women of color on the show: Nicole, of course, but also Shannyn Sossamon, Lindie Greenwood, and Jessica Camacho.

The finale killed off both Abbie and Pandora, but given that she was one of the season’s main villains, that wasn’t too surprising. Abbie’s death, on the other hand, was sheer nonsense, and the aftermath was even worse.

Apparently at some point Pandora’s husband, The Hidden One, came to Sleepy Hollow to wreak havoc. Pandora joined up with Our Heroes to help stop him. Abbie and Ichabod retrieved her box for her, and Abbie was forced to sacrifice herself in order to give the box enough power to stop The Hidden One.

Abbie sacrificed herself to save the world and, of course, Ichabod. Why couldn’t Ichabod have died to save Abbie? Perish the thought…

In some sort of limbo-like afterlife (Abbie describes it as a “waiting room”), Abbie meets her old mentor, Sheriff Corbin. He tells Abbie, among other things, that she’s “taken [Ichabod] as far as she can.” Abbie later tells Ichabod that she was his partner, along with others (Betsy Ross, Nikki Reed’s insufferable character), and that their job was to “move him forward.”

Sorry, Kanye. I totally am.

Not only did they kill their female lead, they also took a story that was once about these two as equals, Witnesses together, and changed it so that Abbie’s entire existence was solely about Ichabod: Ichabod’s mission, Ichabod’s role as Witness, being a partner to Ichabod.

Talk about adding insult to injury.

If there’s a season 4 (a big IF), apparently a Witness’ soul never dies, so some distant relative of Abbie’s will be tapped as the new Witness. Another woman to die on Ichabod’s behalf? Great.

According to Variety, producers were in talks with Nicole Beharie since before season 3 started about leaving the show. She wanted out of her contract, and they didn’t argue with her. Original plans were to kill her in the midseason finale, but they decided to hold off.

There are a thousand ways to write someone off a show without killing them, and even if her death was justified (it’s not), the aftermath was total crap. They completely sold out and undermined her character and everything she meant not only to Ichabod, but to the world.

Also we have to look at why Nicole wanted out so badly. She had a relatively steady gig with a good paycheck. She said from early on that she was excited to play Abbie because the character wasn’t anyone she ever thought she’d get to play.

From the beginning, producers and network treated Nicole poorly. Tom Mison was always treated as the headliner. This season they’ve been sending Nikki Reed to conventions. They didn’t invite Nicole to be on the season 2 DVD cast commentary. Oddly, the official Twitter account unfollowed her. Then there are these Tweets and Instagram posts that make a lot more sense in context.

In season 2 Abbie was completely sidelined in favor of Ichabod’s wife, Katrina, and their son Henry. The (new) showrunner (Jose Molina was replaced for season 2) clearly had no clue (or didn’t care) what drew viewers to the show in the first place: Abbie Mills, Abbie and Ichabod, and the diverse, interesting cast. They killed off John Cho’s character, drastically reduced Jenny Mills’ screen time, and fired Orlando Jones between seasons 2 and 3. Jones was a fan favorite not only for his character, but also because of his engagement with the fandom.

The show’s refusal to give Abbie a love interest was another huge issue amongst fans. Obviously there was the Ichabbie factor: Tom Mison and Nicole Beharie had amazing chemistry, and honestly you’d have to be blind not to see it. It’s what made the show so great in season 1. The showrunners, however, constantly insisted that Abbie Mills was a “strong woman” who didn’t need a man. I’ve addressed that issue in my article about Richonne from The Walking Dead, so I won’t get into it again.

It gets worse, though. In this interview with TVLine, showrunner Clifton Cambell explains,

It’s impossible not to see the love between these two. It’s palpable. The chemistry is there. We always felt it was much more in the vein of a level of intimacy that even goes beyond the physical. And that’s how they pretty much played it from the beginning. […]

Having said that, there’s every reason to hold in your heart that their love is enduring and that the intimacy part really wouldn’t have made that stronger. The looks they give each other, the thoughtfulness and respect they show each other is greater than any love we could ever have conceived. They gave that to us, and we wanted to respect that right to the bitter end.

I hope I don’t need to explain how gross that quote is, but just in case I do, see the Richonne article I linked above. It lays it all out. Besides all of that, it’s just plain insulting. Sometimes you just wanna see an OTP get it on, okay!?

In all seriousness, I’m entirely sick of watching women die on TV. I’m even sicker of watching it happen to women of color. I’m tired of women being treated like we’re disposable. Sure, let’s call up another Witness to replace Abbie! No big thing. No one’ll care as long as the hot white dude’s still around!

Give me a break, Sleepy Hollow. You were a show with so much promise, and you’ve thrown it all away. Maybe if you’d treated your star better she wouldn’t have wanted to leave. You wouldn’t now be facing the outcry of however many people are still actually watching this crap. Variety reports that Nicole’s departure won’t have any effect on the show’s possible renewal, but really? When the network sees how fans are reacting, and how many are saying they’re done with the whole thing? When the fans’ hashtag went from #RenewSleepyHollow to #CancelSleepyHollow mid-episode, do you really think that’s good news for renewal possibilities?

Orlando Jones’ tweets sum it up: 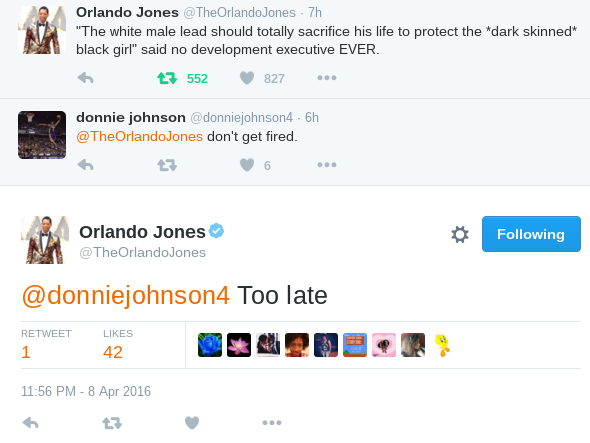 Too late, Sleepy Hollow. You done screwed up, big time.