It’s here! I can’t believe that my favorite series is here and on Netflix for all to see!! For anyone who thinks I’ve binged the show (including the staff)- they are incorrect. It’s been a decade in the making, and I finally get to enjoy this. So I’m doing it slowwwwllyyy.

Thus, my review of A Series of Unfortunate Events will be in two parts. While I absolutely love the novels, I must take very due diligence in evaluating what is a second attempt at an adaptation- a chance that most series do not get. I think the trouble with adapting this series is that there is so much absurdity that makes it difficult to condense successfully. Which is why I really admire Netflix’s take on it- with still quite a few critiques.

As far as the introduction goes, the song definitely sets the tone for the show- odd, creepy, rife with reverse psychology, and full of Neil Patrick Harris. Still, I’m not the biggest fan of the song. Sorry! Also, this is the biggest nitpick ever, but…why are we seeing Lemony Snicket’s face? I’ve been upset about this since the trailer, and it will probably irritate me right up to the end of the series- although Patrick Warburton’s delivery is exceptional.

As The Bad Beginning states, first impressions are often wrong- and to be honest with you all, that’s exactly how I felt about Neil Patrick Harris as Count Olaf. After having finished both The Bad Beginning and The Reptile Room, I am warming up to his Count, but still not wholly impressed.

This was my reaction to Olaf the entire first episode.

Call me a stickler, but after re-reading an already beloved series, it seems that the characterization of Count Olaf is quite a challenge, in both the show and the movie. I get that an actor playing a bad actor can give a certain amount of freedom, but it kinda made him less intimidating than what was put on page. Some of his best creepy moments in the first four episodes were in “The Bad Beginning: Part 2”, in his attempts to “claim” Violet.

Admittedly, it seems that I like Olaf in costume more than I actually like him as himself. For some reason the evil overcomes the ham that he’s portrayed to be when in costume. Harris’ Stephano made me laugh (and cringe) quite a

bit, as that knife wielding was acutely accurate. As I investigate further into The Wide Window and The Reptile Room, I’ll let you know more.

The Baudelaire children themselves are damned good. Violet, Klaus, and Sunny are the somewhat naive but incredibly intelligent children I had hoped, some of their lines being straight from the page.

The first four episodes have been accurate to the story (some parts almost verbatim), but with a bit of an added twist for series lovers and new viewers alike. The world around the Baudelaires’ adventures is being formed in a perspective we were unable to see in the novels, besides Lemony’s wacky anecdotes sprinkled throughout. However, Netflix changed it up on the book lovers as well, revealing some secrets early (such as VFD’s abbreviation) whilst providing a few more mysteries.

And for those who have only watched the half that I have, I’m sure you’re questioning who the parents featured at the ends of each episode are. At first I was upset- most of the point of ASOUE is the children coping with their parents not being around- but I realized that I was missing something crucial. Neither of the parents, throughout all 4 episodes I’ve watched so far, have said the children’s names- only that they have 3 children. As a result, the Quagmire triplets immediately come to mind. If my theory is right, then I do commend Netflix on the convincing bait-and-switch, although not totally aligned with the novels.

As for Jacquelyn, I have two theories:
1) she is a gender swapped Jacque Snicket
2) she is actually Kit Snicket

Either way, her obsession with the Baudelaires seems awfully similar to (who I think is) her brother’s. We’ll see.

So far, the series has all the major elements- Lemony’s soliloquies, Count Olaf’s disguises, the henchmen that are VERY close to their original descriptions. Even the Incredible Sunny Moments remain, although not all of them are as written.

Before I wrap this up, I will give a lot of credit where it is due- I LOVE the performances of the henchmen,  Mr. Poe, Uncle Monty, and Justice Strauss. Netflix leaves no stone unturned in their portrayals, and makes me want more.

It’s great to see how the series is unfolding, and though I have my qualms I will continue to watch.

So I will do just that, and report back to you all next week. 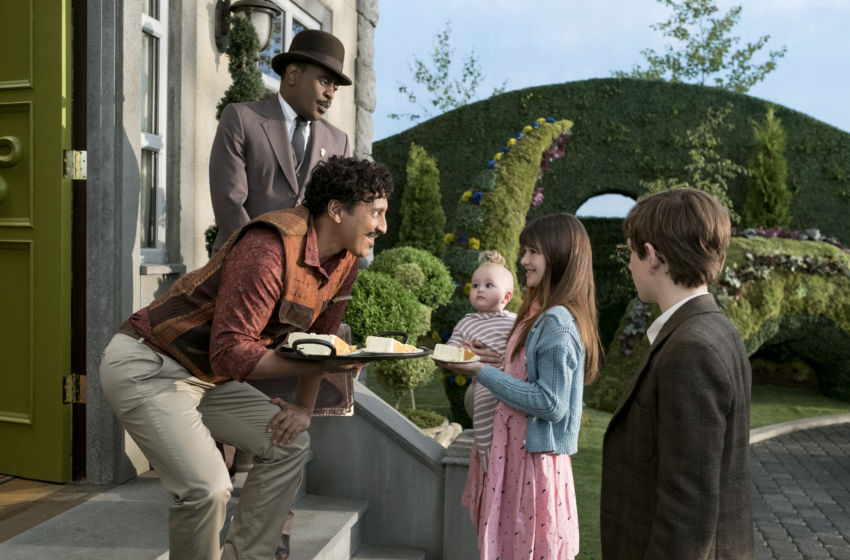 Have a Very Fine Day, everyone.