[tw for discussions of rape and violence]

Let me ask you something, dear Fandom Followers. Do you have the Game of Thrones blues? The Orange is the New Black binge hangover? The “I miss Breaking Bad” lack of direction and television purpose? Maybe it’s more like the “wow Lost is better when you can bing it on Netflix but I’ve watched it 10 times now” blahs?

Have I got a surprise for you!

Over on Starz network there is a (relatively) popular show that, somehow, despite coverage from major publications like Vanity Fair, Entertainment Weekly, etc., still manages to slip through pop culture’s claw-like fingers. Spoiler alert: it’s Outlander!

I’ve been doing Outlander reviews here all season, as I’m sure many of you have noticed, and I talk it up constantly on my blog, Facebook, et. al., but somehow, somehow, I get the impression that many of you aren’t listening! You’re like, “yeah that’s that time travel show or something but, like…wow I hate Game of Thrones…”

Legit. I hate Game of Thrones, too. But as much pleasure as one can derive from hate-watching that nonsense, can you imagine how much better you would feel watching THESE TWO gorgeous and talented people pretend to be madly in love every week? While wearing incredible costumes and acting out fantastically-written scripts? 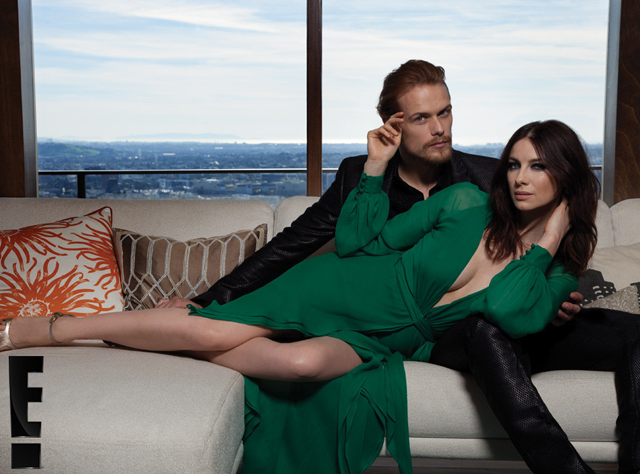 How are we lookin’? 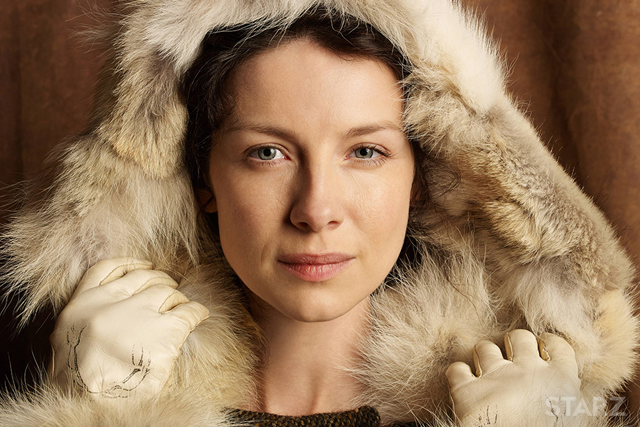 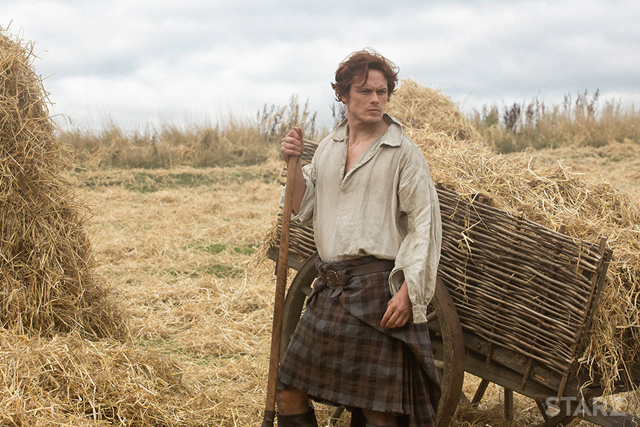 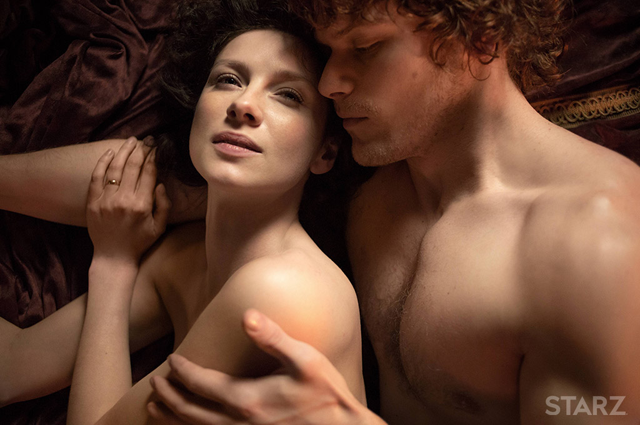 The premise is kinda simple: Claire Randall travels from 1945 to 1743 through some standing stones outside Inverness, Scotland. There she meets Jamie Fraser, and through a series of events they end up married, and then in love. Simple premise, complicated lives.

“But, Meg. Time travel? Really??” Yes, really. Time travel. Outlander is the book that started the “time travel romance” thing, as well as (to a certain extent) the “sexy Highlander romance” trend. The latter, at least, is now almost as ubiquitous as vampires and werewolves, but once upon a time, Diana Gabaldon was revolutionizing the historical romance genre just as GRRM has revolutionized fantasy (Patrick Rothfuss thanks you, GRRM). She has a BS in zoology, an MS in marine biology, and a PhD in behavioral ecology: she is not writing stupid books for stupid people.

And the show doesn’t dumb things down for television audiences, either. This season saw Jamie and Claire embroiled in a regular French noir as they attempted to take down Bonnie Prince Charlie’s Jacobite rebellion before it could even get started, then returned to Scotland to…support it, because their efforts to thwart had proved in vain. 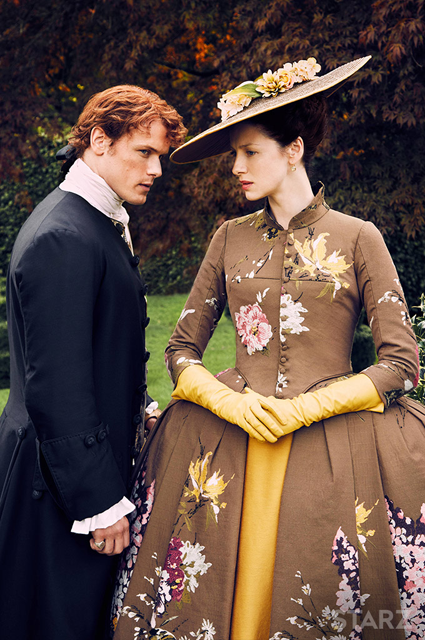 Schemin, and hopin, and plottin…

In all seriousness, one of the things that frustrates me most about Game of Thrones and, to a certain extent, quite a few other shows, is lack of consequences. Jon Snow is brought back to life and becomes King in the North a few weeks later without anyone stopping to ask if he’s, ya know, a zombie or something. Cersei blows up Westeros’ religious center and is crowned queen. Dany burns down the Dothraki’s most sacred temple and they follow her across the poison sea.

Outlander does not flinch away from consequences. This is not a show for the faint of heart. There’s violence, much of it sexual. There’s trauma and pain and loss and tears and frustration. Also this motherfrakker: 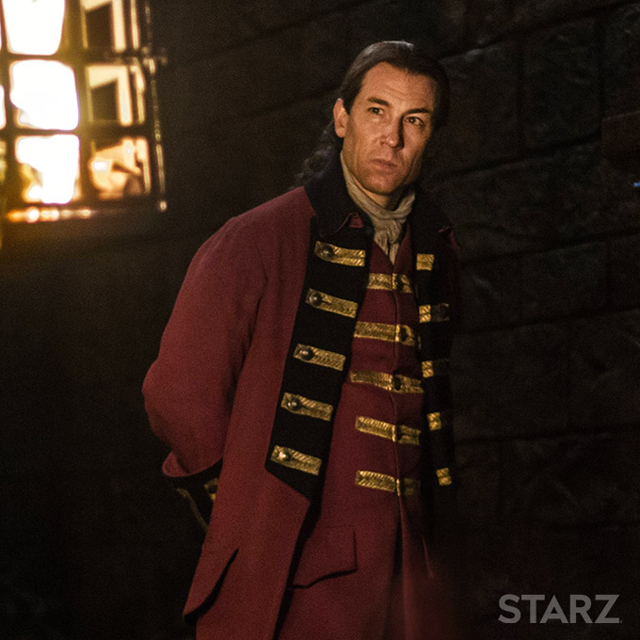 Jack Randall is sort of the Outlander’s Ramsay Bolton, minus the dogs. He’s a sadist, rapist, murderer, torturer, pedophile…think of something nasty, and Jack Randall is IT. Unlike D&D, however, Ronald D. Moore and co. don’t try to humanize Jack. Yes, in episode 2×12 we saw him tend to and mourn his little brother, but at the same time we were continually reminded what a horrific piece of work this dickface is. Trust me: there is no woobifying Jack Randall, and the show (like the books) makes sure we know that.

Of course, it takes more than a great villain to make a great show. There are very few shades of gray in Jack Randall (maybe dark, dark charcoal type gray), but most characters aren’t as simple. Oh, hum, I should clarify: while Jack is Evil with a capital E, he’s also…human. A nasty, gross, “ew get away from me” human, but still human. A cardboard cutout with a twirly mustache he is not, and maybe at some point I’ll write a much longer essay exploring the nuances of Captain “Black Jack” Randall, but that’s not for today.

Between Colum MacKenzie, the Laird of Clan MacKenzie who always seems to be up to something; his war chief brother Dougal; the villainous Comte St. Germaine; the slimy Duke of Sandringham; and the inept Prince Charles, it’s no wonder Jamie and Claire’s lives are never simple. Starz provides a brief summary of characters by season here, and it can be helpful to match names (and spellings) to faces, especially since you’re usually dealing with either thick Scottish or thick French accents.

Whew. We’re only on season 2 of the show. Right now there are 8 books, with a 9th forthcoming, plus 2 (that’s TWO) volumes of the Outlandish Companion to help us remember what’s what and who’s who. Starz has already renewed the show for at least 2 more seasons, so here’s to trying to remember wtf’s goin’ on for years to come!

Having said that, I’m glad the show doesn’t shy away from the books’ sometimes spaghetti-like plot threads. Game of Thrones tends to dumb down much of Martin’s series, leaving out characters, plots, locations, but Outlander seems determined to follow Gabaldon’s rich, complex framework. The show trusts its viewers, something I appreciate. I hate being spoon-fed things. Give me something to guess about, wonder about, worry about. That’s what I like in my television. 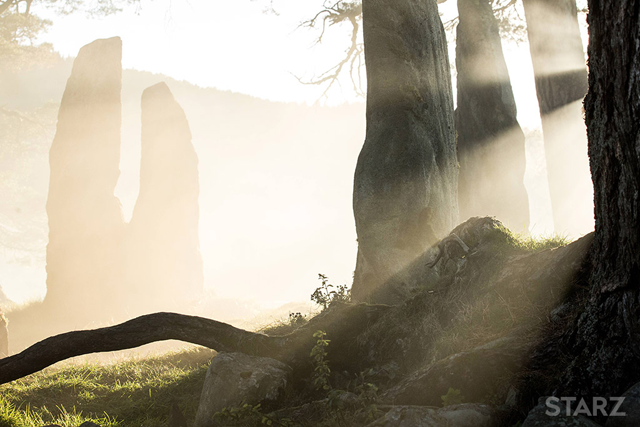 Is Outlander a perfect show? Of course not. Nothing’s perfect. There isn’t enough diversity in the cast (don’t argue “history!” with me, as if POC hadn’t been invented in 1743). That problem should be somewhat remedied in later seasons, I hope.

One of the show’s few gay characters is, uh. Jack Randall. I don’t think we need to talk about how troubling that is.

There is, as I said, a lot of sexual violence. The one thing that redeems that aspect, something that would normally turn me off big time, is how it’s handled. Watching, for example, episode 5×6 of GoT (the Wedding Night) made me feel disgusted and sickened, not just because of what poor Sansa had to endure, but also because of how it was filmed. Sure, the camera cut away, but only so we could experience Sansa’s rape through Theon’s eyes, as though Theon were who we cared about at that moment…and I love poor book!Theon and his arc.

Outlander, on the other hand, doesn’t make you feel like a voyeur. Episode 1×15 (which I’ll be covering in my recaps that’ll start again week after next) is one of the hardest episodes of tv I’ve ever watched. Jamie is subjected to brutal torture at Black Jack’s hands, including sexual torture, and most of it is told in flashback as we watch Jamie attempt (and nearly fail) to come to terms with it all. It’s violent and awful and heartbreaking, but it’s not dirty. The narrative doesn’t invite the viewer in with a little wink and a nudge, but instead depicts every moment in stark, bloody terms: this is horror. This is worst case scenario. Can anyone come back from this?

My point is, don’t go into this expecting just a light-hearted time travel romp. There is darkness and brutality, but there is also love and kindness. Family. Friends. Joy. Heartbreak. I’m beginning to sound cheesy, but…

There is nothing simple about Outlander. Nothing reduced to banality or commonality. It’s a show with teeth. A show that bites. Is that what you’re looking for?

You know what? I bet it is.

images curtesy of Starz and E!