During the holidays, my sister stayed with me in my tiny, one bedroom apartment. As a result, she bore witness to some of my work—even sitting “quietly” in the background while I attempted to record a podcast. It was a two-way street though; when she wanted to watch Keeping up with the Kardashians (KuwtK) as entertainment, I had no real choice but to sit along and see Khloe travel to Australia to promote her family’s new children’s line. Line of what? I’m not sure.

It was easy to be skeptical going in; after all, KuwtK is often universally considered “junk” entertainment. So after five minutes of Kim and Kourtney discussing the contents of a green “pregnancy smoothie” (idk), I finally had to turn to my sister and ask her: “why do you watch this? What do you like about it.” 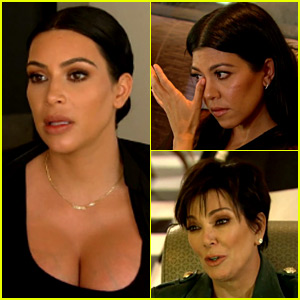 My sister is currently getting her PhD in marriage and family therapy. Perhaps unsurprisingly, her answer was in-line with this: “I like that the show doesn’t shy away from ‘real’ issues. People make fun of it, but it follows this family and their problems. They’re rich so there’s something aspirational about it, but at the same time we see the real emotions.”

Being a skeptical person, I told her that a lot of reality shows are scripted. She shrugged and pointed out that magazines actually follow this. Lamar Odom’s surgery…Scott’s drug problem and subsequent problems with Kourntey…it’s possible some things are heightened, but we still see people reacting to these situations in a way that feels quite authentic. That’s kind of the point of reality TV. She then told me that maybe I should write about it for this site. “But there’s no KuwtK fandom,” I said.

Somehow, that stopped me in my tracks. Why isn’t there a fandom for this show? I mean, the Kardashians have fans; die-hard fans even. Yet instead of “stans,” they’ve earned the name “paparazzi.” You’d think because the Kardashians are real people, engaging with this show might be even easier than engaging with a work of fiction.

But yet, “fandom” seems hideously inappropriate. Fandoms are where nerds we live, debating (for a certainty), but also, creating. In my mind, “fandom” revolves around fanworks. Yet this is still imprecise as a definition. There could certainly be curative fanwork for the Kardashians; someone could easily make a full time job of just keeping up with all of their social media accounts and dedicating a blog to that. In fact, I’m sure this exists. My sister demonstrated a clear space for analytic fanwork as well, given that she was basically providing psych evals of everyone on the show. So what’s missing? Transformative fanwork.

In a way, it makes sense to consider that the litmus test of “is this a fandom?” and also goes to explain why reality shows are strikingly absent from most “nerdy” conversations. Perhaps I’m just speaking from a limited experience, but even reality show marketed for us hasn’t seemed to do well. Am I wrong? Did you guys actually enjoy King of the Nerds?

But if you think about it…yeah. Producing fanart or fanfic of real people seems a little bit strange. I’m not saying it doesn’t happen, of course. But I think a fair amount of us can agree that’s a tad on the invasive side. It’s true that tabloids sort of promote celebrity shipping culture, but from what I’ve seen, we’ve all been at least self-conscious enough not to let those turn into full-blown “ship wars.” Uh…ignoring Brangelina.

So fandom is anything with transformative fanwork. Boom. Well this brings up two issues:

1.) There are people who are definitely a part of fandoms that don’t even touch the transformative aspects, and that does not make their experience lesser or invalid. In fact, the existence of A Song of Ice and Fire fics has no bearing on posters who only participate in the reread subforums of westeros.org. So why should the existence of fics validate a fandom as a whole? That’s weird, and prioritizes a certain “type” of fan. No thanks.

2.) There’s ways to be transformative without writing fanfic. You’ve heard the joke that fantasy football is “just like Dungeons and Dragons.” But like…yeah. These are fans interacting with the NFL in a transformative way. They build their own teams and construct their own reality, and are typically highly engaged. In fact, to an outsider hearing someone talk about their draft pics vs. someone talking about their trash ship is probably going to sound similarly nerdy.

There’s also parodies, such as the perfect show Burning Love, which satirizes ABC’s Bachelor/Bachelorette series. Watch it and tell me what is so markedly different between this show, versus the Legend of Korra fan made parody series, Project Voicebend.

Still, there seems to be this arbitrary line in the sand as to what makes a fandom. “Reality” can’t count, though apparently there is a Tudor fandom. Not for the show…like for the historical figures.

But whatever, let’s take this arbitrary line and blur it even further. I would argue that the Twitch streaming community—that is individuals who play video games live, usually with reaction cam in the corner of their stream—can bridge this gap. There is most definitely a Legend of Zelda fandom; few would argue otherwise. In fact, my first fic I ever wrote (the file is gone so don’t ask) was during the 7-year gap in Ocarina of Time, and focused on Zelda in her life as Sheik. Remember when she saved Ruto and junk? I think I had her visit Termina, from Majora’s Mask, at one point too.

Go onto Twitch right now and you will certainly find people playing Ocarina of Time. In fact, there is a community of people who not only play this game, but “speedrun” it. They optimize routes and find glitches to exploit that decrease their completion time. They have their own terminology, heated debates about strategy or which version of the game to play, and there are even speedrunning conventions. Moreover, speedrunners have their own fans, who participate in chat while a speedrunner plays and engages with them.

I really don’t think I could make an argument as to why this is not a fandom. Yet I’d also be floored if that’s how any of its participants think of the speedrunning community.

That’s when it struck me, sitting on the couch next to my sister, watching KuwtK. Kim had just told Kris that she was going to be moving in while her house was undergoing renovation, and her mom did not react well. I asked what the problem was, and my sister explained, “oh, because last time Kim had to move in for a little bit, it was a disaster,” as casually as I’d answer a clarifying question about Steven Universe.

We’re all participating in fandoms. It’s just that some of us are more comfortable with the label than others. Let’s fix that. On October 13, BTS’ massive fandom, ARMYs (named by BTS)* were so excited for member Jimin’s birthday that they trended 20 separate hashtags, the...